“Set for a close and exciting grand prix weekend”

For the second of the season’s two successive high-speed low-downforce circuits, we brought further circuit-specific upgrades, which were successfully tested during this morning’s practice session. Over a single lap, both cars look competitive, although Jenson concedes that there’s further work needed to improve long-run performance.

At what is expected to be the fastest race of the season, Jenson recorded our highest speed through the circuit’s speedtrap of 348.6km/h (216.6mph) – set during FP2.

“There’s still some work for us to do, but, all in all, it’s been a relatively good day for us.

“Our single-lap pace looks quite good, but we’re probably lacking in race pace compared with some of the other teams. Still, it’s always difficult to know where you are on a Friday – we don’t yet know quite where we stand.

“The revised run-off at Parabolica is still slower, if you go off-track, but now you don’t get penalised. I’m definitely carrying more speed into that corner than I did last year – because you’re less wary of the gravel exit, which is no longer there. It’s different, but I’m still not sure whether I like it.

“Looking at tyre wear, it’s going to be a one- or two-stopper around here, but the warmer weather that’s forecast could make it easier to blister the tyres. And that could make the strategy a little trickier for everyone.”

“I think the high-fuel runs this afternoon were pretty promising. Our straight-line speed and braking both feel good, so I think we should be able to race reasonably strongly with this car, which is pretty important around here.

“Hopefully, we should be able to get a good qualifying result – but I’d rather have good race pace than good quali pace.

“I think a low-downforce track with big braking zones – areas where our car is usually quite strong – means that we should definitely be trying to get a decent result this weekend.” 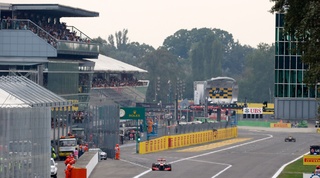 “This was a reasonable first day of practice, and it seems as if the low-downforce promise that we showed at Spa has carried over into this weekend. Both drivers looked competitive during this morning’s opening practice session, and it’s positive that the upgrades for this weekend seem to be delivering.

“We’ve still got some work to do in order to bring our long-run performance up to the standard of our single-lap pace, but we feel we have an understanding of the car, and can further optimise it overnight ahead of tomorrow’s practice and qualifying sessions.

“With just 0.8s covering the top 10 this afternoon, it looks as though we’re set for a close and exciting grand prix weekend.”