"We’ve hopefully made a bit of a step"

With track temperatures reaching a scorching 58deg this afternoon, the team’s main focus during Friday’s two practice sessions was on how to best manage the tyres in the sweltering temperatures. Additionally, Kevin ran an innovative new rear-wing solution – which featured unique ‘crinkle-cut’ edges to its elements. The day also saw the debut of Jenson’s new race engineer, former Olympian Tom Stallard.

The high temperatures presented plenty of issues for everyone – but the team has gathered enough solid data to make some effective changes ahead of tomorrow’s final practice and qualifying sessions.

"Looking at the timesheets, you’d say we look quite good, but we’re finding it a little bit tougher over the long-runs. I think we’re overheating the tyres under traction. It’s so difficult to manage the tyres in these temperatures, and it’s especially hard to get the Supersoft tyre working correctly without overheating it.

"We were able to test lots of interesting things today – and, for me, there’s more to come tomorrow. Hopefully, I’ll also have the new rear wing fitted to my car. Sometimes, it’s difficult to know what the advantage it gives, especially when you only get a few laps on Saturday morning to try it, but it’ll be interesting to give it a go.

"The car didn’t feel any different without our FRIC system – it wouldn’t really make a massive difference around here anyway.

"As ever, we’ll just make the best out of what we’ve got – and I think we can push a bit harder tomorrow."

"The temperatures are very high, so the biggest challenge for us is to make the tyres work – it’s going to be tricky to understand, especially if the weather changes for Sunday, when it could be a bit cooler. But it’s the same for everyone.

"I can’t really explain the relatively close gap to the cars at the front, but everybody is running different programmes on different fuel-loads. The new rear wing that I tested today feels good; it doesn’t upset the car, so, hopefully, we can carry it forward.

"Without FRIC, our car still feels really good – which is a positive – I don’t know about any of the other drivers, but I think we’re pretty happy with the car at the moment.

"Still, we need to stay focused: it’s only practice, so it’s difficult to assess the pace of the other teams, but we’ve hopefully made a little bit of a step." 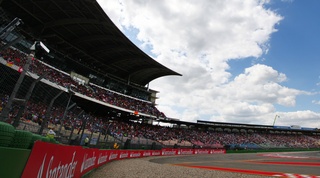 "The incredible track and ambient conditions that all teams faced today meant that we had to prioritise our understanding of the different tyres’ behaviour at such high temperatures.

"It’s been very much a day of learning: not only was our workload increased by our learning about the tyres, but we also undertook a fairly intense programme of aero development, which included work to understand and evaluate a relatively unusual-looking new rear-wing on Kevin’s car. Fortunately, the initial findings seem positive, and the plan is to run it on both cars tomorrow.

"A quick look at the timesheets would indicate that we’ve made progress – we have, but I don’t think you should read too much into today’s results. We still need to stay humble, and do a lot of work to improve our long-run pace, but it’s nonetheless encouraging for everybody that the months of hard work are starting to show some results."

The day two heroes were made