"We know what we have to do, and we’ll work night and day to do it"

That was a difficult weekend for the whole McLaren team.

After qualifying 12th (Jenson) and 15th (Kevin), both drivers struggled in the midfield throughout the race. Kevin was the sole starter on the Prime tyre, running until lap 17 before making his stop for Options. Jenson was the first runner to stop, after complaining of graining during his first stint – he changed from Options to Primes on lap seven.

Both drivers pushed back into the fray to run 13th and 14th at half-distance. Two further stops (Jenson, Primes, on lap 28; Kevin, Primes, on lap 31) saw the order settle with Jenson running 11th, chasing Daniil Kvyat, and Kevin in 13th, trying to close down Jean-Eric Vergne.

They finished in those positions: 11th (Jenson) and 13th (Kevin).

"It was pretty difficult out there. It felt a little bit like qualifying yesterday: we just couldn’t get the front tyres working – they just grained.

“We’ve got a few upgrades for the next grand prix, in Barcelona, but they won’t be enough to close our performance gap to the fastest cars. But the guys are doing their best, and a result like this is disappointing for everyone, especially for the mechanics and the guys back at the factory, because they’ve all been working so hard."

"It felt like a long race, because there wasn’t much I could do out there.

"Our car lacks downforce – that’s its main problem. The way it’s set up, and how it feels, has always been positive; it’s just low on grip, that’s all. So, clearly, we need to work as hard as we can to create that missing downforce.

"I know the guys back in Woking are doing their best, and I have faith that they’ll deliver that downforce before too long." 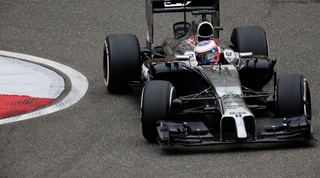 "Our car isn’t competitive enough, we know that, its deficiencies mostly the consequence of insufficient downforce.

"Furthermore, the Shanghai circuit is front-limited – in other words it punishes lack of front-end grip. That being the case, the fact that we’ve been unable to get sufficient heat into our front tyres in the chilly weather conditions we’ve experienced this weekend has further compromised our performance here. 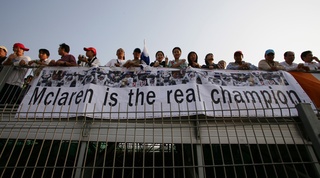 Shanghai on cue for an F1 spectacle