"Authenticity among the pine trees and mountains"

Formula 1 returned to the Styrian foothills for the first time in a decade today, as practice kicked off ahead of Sunday’s Austrian Grand Prix. Our programme today was divided into two constituent parts: the morning’s session was spent focusing on gathering data in order to evaluate new aero components; the afternoon was spent in more traditional fashion, refining car balance and gaining an understanding of the characteristics of the Prime and Option tyres.

"For us, it was a relatively productive day. We’re still struggling with graining on the Supersoft tyre, as we did in Canada, but the Prime seemed good on both our short- and long-runs. Our aim will be to make progress and, at tracks that are less suited to our package, to not drop too much ground to the teams ahead of us. Eventually, it would be nice to be able to challenge the teams ahead of us in the constructors’ fight.

"There will probably be a couple of talking points in the drivers’ briefing tonight. The pit entry at Turn Eight is tricky; I tried to go round the outside of someone who was pitting, but I just went straight on because I was on the marbles. So that might need a little look.

"Additionally, the exit of Turn Eight needs looking at – it’s seemingly quicker to run with all four wheels off the track, but it’s a bit more dangerous because you run out of asphalt and have to get back on the track before it grasses over.

"Still, today was fun. It’s always nice to go to a high-speed track like this – we don’t have too many of them left any more – it’s very relaxed, it’s old-school, a good mix. We love the glamour of Monaco and the city races like Montreal and Singapore, but it’s nice to have these old-school tracks, too."

"This is a really cool track, with some nice corners and interesting changes in gradient. This is exactly the kind of place I like: fast corners and big braking zones.

"And, to be honest, our car didn’t feel too bad through the high-speed stuff – there are still a few things we need to look at ahead of tomorrow’s running, but it’s been a positive day. We still need to look more closely at the results of today’s aero tests – and we’ll have a clearer idea of where we are by tomorrow – but the car felt good, so I’m positive.

"Turn Eight is a bit tricky – [to enter the pits] you have to stay right before the corner, which requires you to be slower at the apex, so we might have to have a look at that during the drivers’ briefing tonight." 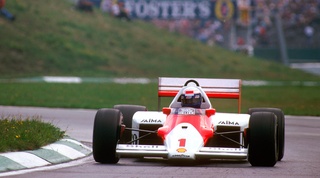 "There’s a real earthiness and authenticity to be found at a racetrack like this: Formula 1 certainly acquires an added dimension when you’re racing at high-speed, surrounded by the mountains and the pine forests – and thousands of passionate fans.

"We had a busy programme for today, spending the morning gathering aero data in order to evaluate the new components we’ve brought to the track this weekend. The afternoon’s session was more typical, with Jenson and Kevin running through their set-up and tyre-comparison work.

"Fortunately, we got plenty of laps under our belts today – now the engineers will sit down and start processing the data in order to maintain our momentum into tomorrow and Sunday."

10 Facts You Didn't Know About The MTC