The Circuit de Catalunya was one of Barcelona’s many building projects during the build-up to the 1992 Olympic Games. It staged the start and finish of the time trial cycling event at the Games, and has been a permanent fixture on the Formula 1 calendar since ’91.

The track’s wide variety of corners make it a severe test of man and machine, which is why it’s a favourite test venue for the teams. Two of the three pre-season tests took place at the Circuit de Catalunya and, between them, Jenson and Lewis have already notched up 3,500km around the track this year.

An abrasive track surface, combined with high cornering speeds, makes the circuit very demanding on tyres. Pirelli are taking their hard and soft compounds to the race, so three pitstops look most likely, but strategies will vary as teams factor in the lack of overtaking opportunities around the lap.

McLaren is the second most successful constructor in the history of the Spanish Grand Prix, the most recent of its eight wins coming in 2005. Jenson has one victory in the race, in 2009, while Lewis Hamilton achieved a best result of second in 2011. 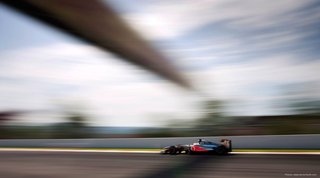 Shock winner in 2012 was Williams driver Pastor Maldonado. He was the fifth winner from five races at the start of an unpredictable season.

The 1975 race was the last to be held at Montjuich Park, Barcelona. Emerson Fittipaldi refuses to race due to safety concerns, while McLaren team-mate Jochen Mass scored his first, and what would turn out to be only, victory.

In 1988, Alain Prost beat pole-sitter Ayrton Senna away from the line at Jerez and the Frenchman was at his imperious best all afternoon. He beat second-placed Nigel Mansell by 26s. Ayrton suffered fuel readout problems and came home in fourth.

The 2001 race was the one that got away from Mika Hakkinen. He led into the final lap, but his Mercedes V10 gave up at Turn Three and he was forced to pull off. He was classified ninth, handing victory to arch-rival Schumacher.