Starting at 8pm (local time), two hours after darkness has fallen over the city-state, the Singapore Grand Prix is the only night race on the 2013 Formula 1 calendar. To enable visibility, the 5.073km Marina Bay circuit is lit up by 1,500 halogen lamps, giving a luminosity of 3,000 lux – as bright as daylight.

The track is the second street circuit of the year, following on from Monaco, and runs in an anti-clockwise direction. The cars negotiate its tight and twisty confines – 14 left-handers, nine right-handers – in maximum downforce trim and the key to a quick lap is to have good traction and a neutral car balance.

The Singapore Grand Prix is the longest race of the year, taking close to two hours to complete its 61 laps. That makes it physically tough for the drivers, who have to cope with the 30-degree heat and 70 per cent Tropical humidity while wrestling their cars around the busy, stop-start layout. As a result, they expect to lose up to three kilos’ fluid loss during the race.

Lewis won the Singapore Grand Prix once – in 2009 – and Jenson has achieved a best result of second, in 2011. Both Jenson & Sergio will be hoping to return to the podium this year. 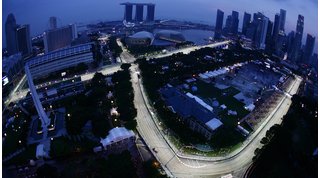 In 2008 Lewis drives a mature race to finish on the podium in the inaugural Singapore GP. He comes home third, 5.9s behind race winner Alonso and 3s behind second-placed Nico Rosberg.

A more emphatic victory than 2009 would be hard to find. Lewis dominates the race from pole position, coming home 10s ahead of Timo Glock.