The tortuous streets of Monte Carlo provide the next challenge for Vodafone McLaren Mercedes on the 2013 Formula One calendar. The Principality’s 3.3km circuit is the shortest and slowest of the season, but it’s also one of the most demanding for man and machine. McLaren has won the Monaco Grand Prix 15 times - more than any other constructor.

The track layout has remained largely unchanged since its inaugural World Championship race in 1950. The inclusion of Armco barriers in 1969 made it considerably safer for competitors and spectators, but the challenge of the race is still as tough as ever. The smallest error can result in a driver’s race ending in the barrier and more than 4,000 gear-changes during the 78-lap race make technical excellence a pre-requisite.

Pirelli will bring their soft and super-soft rubber to the race. Both compounds have been used already this season (the super-soft in Australia, the soft in China), but this is the first time they have been raced together as the prime and option tyres. The low-grip nature of Monaco’s asphalt, combined with the circuit’s average speed of just 160km/h, means tyre wear shouldn’t be as big a factor as it was in the Spanish Grand Prix last time out.

Jenson Button won the race from pole position in 2009, and both he and Checo are aiming to finish in the points this year.

McLaren at the Monaco Grand Prix


“Monaco is unlike any other racetrack in Formula One. A qualifying lap around there is an exhilarating experience for a driver: you turn into corners on the limit and you kiss every barrier at the exit. To get pole position, as I did in 2009, is hugely satisfying and you need to be inch-perfect for 78 laps in order to win the race. It’s a great challenge.

“The average speed around Monaco is the slowest of the year, but it feels very quick. The track’s quite narrow in places and there are some fast sections. The run up the hill from Ste Devote to Casino Square involves some quick changes of direction, as does the Swimming Pool, and the Tunnel is fast, loud and dark.

“Everyone at Vodafone McLaren Mercedes has been working flat-out since the Spanish Grand Prix. We’re not yet where we want to be in terms of competitiveness, but I’m confident that we can make another small step forward in Monaco. We’ll continue to chip away at the performance of the MP4-28 until it’s capable of challenging at the front; there’s no other agenda for a winning team like McLaren. The aim for Monaco is to get both cars home in the points, as we did in Barcelona.”


“Monaco is a great challenge for the drivers. It’s the only circuit on the calendar where you have to build up your speed during practice, rather than going flat-out on lap one. You push a little bit harder with every lap, getting a bit closer to the barriers each time.

“But it’s not just the track that makes Monaco special; it’s the atmosphere as well. The grandstands are closer to the track here than anywhere else on the calendar and that gives us a very close connection to the spectators. The huge grandstand between Tabac and the Swimming Pool can get pretty noisy when it’s full, which is great.

“Last year was my first Monaco Grand Prix. I missed out on a World Championship point by one position and I’m looking to change that this year. The MP4-28 is improving, as we introduce upgrades and understand its performance better. It was more driveable in Spain a couple of weeks ago, particularly on light tanks. That will be vital in Monaco because qualifying is very important.”

“Vodafone McLaren Mercedes has a fabulous record in Monte Carlo. We’ve taken 15 wins – more than any other constructor – through the streets of the Principality and while we’re not yet in a position to challenge for victories this year, we’ll relish the challenge provided by this race and we hope to challenge for more points with both cars.

“Our aim is to continue improving the performance of the MP4-28 in Monaco. The tight and twisty nature of the circuit makes its requirements fairly exceptional, but every kilometer that we complete with the car provides us with useful data because we have a very busy development programme.

“Overtaking opportunities are limited at Monaco, even with the DRS, so qualifying is going to be very important on Saturday afternoon. Both of our drivers know how to turn a quick lap, and Sergio can take a lot of confidence from his excellent performance during Q2 at the Spanish Grand Prix.

“Monaco is one of the jewels in Formula One’s crown. It’s an iconic setting and the race has a lot of history. I’m proud of McLaren’s peerless record in the Principality and would love nothing than to add to it this year.” 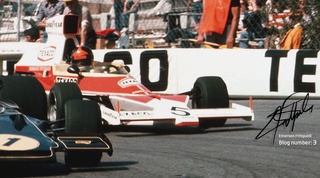 Given that McLaren has won more races in Monaco than any other constructor, it might come as a surprise to learn that the team had to wait until 1984 to take its first victory in the Principality. The team achieved many successes during the ’70s, but Monaco remained elusive. The team’s best result during that decade was Emerson Fittipaldi’s second place in 1975.

“This place is hard enough in the dry,” said Fittipaldi before the start. “As soon as the rain comes, it becomes a bit of a lottery.”

Rain fell throughout race morning, forcing the entire field to start the race on wet tyres. Emerson, starting ninth, knew he would have very poor visibility amid the spray, but he got away well from the grid and was given an early shot in the arm when Jean-Pierre Jarier crashed out of second place on the opening lap. The incident gained Emmo one position and he soon picked up another when Tom Pryce, running third, spun a few laps later.

Emerson’s race was transformed at half distance, when the track became dry enough to slick tyres. The McLaren mechanics turned his M23 around in record time and by the end of the pitstop sequence he was up to second place and sitting on the gearbox of race leader Niki Lauda. Despite trying to pressure the Austrian into a mistake, Emerson had to settle for second place and came home three seconds adrift of the Ferrari.

Jochen Mass fared well in the sister McLaren, coming home sixth (after starting 15th). He was running fifth with a couple of laps to go, but he was overtaken by the Tyrrell of Patrick Depailler in an audacious passing manoeuvre by the Frenchman.