Round six of the FIA Formula 1 World Championship takes place around the streets of Monte Carlo. It’s the shortest, yet most demanding track on the calendar, and the drivers love the challenge of F1’s original street race.

The Monaco Grand Prix was on the inaugural F1 calendar back in 1950 and it’s been a regular fixture since ’55. The layout of the 3.3km circuit has remained largely unchanged, the biggest updates taking place in 2004, when a new pit complex was built.

The track has the slowest average speed of any circuit in F1, but the proximity of the barriers and the lack of run-off make it mentally absorbing for the drivers. Most of the corners are blind and the track surface is often slippery, particularly at the beginning of the race weekend.

Monaco has been a happy hunting ground for McLaren. The team has taken 15 wins in the Principality, and they’ll be hoping to spray more champagne this year. 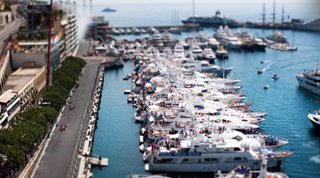 In 1985 Alain Prost qualified fifth, but runs third early on in the race. He inherited the lead when, first, Ayrton Senna retired with a blown engine and then Michele Alboreto spun off at Ste Devote. Prost wins by 7.5s.

Alain Prost scored a hat-trick of Monaco wins in 1986. He led from pole position and was never headed en route to the 23rd victory of his career. Keke Rosberg came home 25s adrift to give McLaren its first 1-2 in the Principality.

In 1988, McLaren dominated the weekend. Senna took pole by 1.4s from Prost, 1.2s ahead of Berger in third. However, the Brazilian crashed out of the lead almost within sight of the flag, handing victory to Prost.

After the disappointment of the previous year, Ayrton dominated from start-to-finish in 1989. He took pole position by 1.1s and won the race convincingly from Alain. The McLarens were the only cars on the lead lap.