"We had a positive practice session this morning, so we hoped we’d have a good qualifying session, too.

"It’s pleasing for the whole team that we got both cars into Q3. However, we were around three-tenths slower than the guys just in front of us – and I’m not really sure where they found those extra tenths because I think we did the best possible job with what we had today.

"Now, though, we’re only thinking about tomorrow. I’m confident we can recover some of the ground we lost to the guys in front of us today, but that’ll require us to pull together a good strategy for the race.

"Our engineers are a great bunch of guys, though, so I’m confident we can do just that."

"I didn’t really expect more from the car this afternoon, to be honest, and we showed just what it could do, Checo and I setting very similar times to each other.

"It’s a little bit of a pity, though, because, if we hadn’t run at all in Q3, our options would have been a little more open for tomorrow’s race. However, sitting out the final session isn’t really what any of us are here to do. Anyway, it is what it is, and we’ll do our best tomorrow.

"I don’t know exactly where we stand in terms of race pace – it’ll be interesting to find out tomorrow – but the good thing is that I’m on the clean side of the grid, which might be an advantage as it’s usually a bit chaotic down into the first corner here.

"All in all, I reckon we can certainly do something from ninth on the grid. Everyone is going to be on pretty similar strategies tomorrow, I’d say, so we’ll have to see if we can make our race work for us in another way.

"The weather forecast for tomorrow looks a bit changeable, too, and things could get very interesting if it rains during the race." 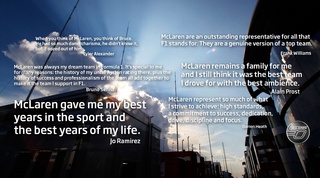 "Today we saw very solid performances by both Checo and Jenson, the result being slots on the fourth and fifth rows of tomorrow’s starting grid respectively.

"As we suggested yesterday, however, qualifying may not be as crucial here as it is on most other circuits, especially bearing in mind that we gather that rain is a distinct possibility tomorrow.

"Moreover, in the recent past our drivers have both proven themselves to be competitive and combative racers who are well able to make good progress from suboptimal grid positions. You may be well sure, therefore, that they’ll be doing their utmost to forge their way through the field tomorrow, in what may well be a very tricky race, especially as Monza is a circuit on which overtaking is less difficult than on the more tortuous and less flowing circuits that make up the bulk of the modern Formula 1 calendar."

Getting to know: Matt Morris