The final European race of the 2013 season takes place at the Autodromo di Monza, on the outskirts of Milan. It’s the fastest racetrack on the Formula 1 calendar, with an average speed in excess of 150mph, and it’s one of the season’s most historic venues. It was built in 1922 and has hosted the Italian Grand Prix every year since 1950, with the sole exception of 1980, when it was held at Imola.

The 3.600-mile layout consists of four long straights, along which the cars exceed 205mph. To maximise straight-line speeds, the cars run in low downforce configurations that have been developed specifically for this event. But the teams are careful not to remove too much aerodynamic grip because the cars need to remain stable under braking. On two occasions they decelerate from 200mph to less than 50mph in just two seconds.

Even with its long straights and its two DRS zones, Monza is a difficult circuit upon which to overtake. The Italian Grand Prix has been won from pole position 10 times in the last 13 years, including Lewis Hamilton’s emphatic victory for Vodafone McLaren Mercedes last year. Statistically, that makes pole position at Monza more important than at Monaco, which has been won from pole only eight times during the same period!

As was the case at the Belgian Grand Prix last time out, Pirelli will supply the teams with their two hardest rubber compounds at Monza. The Medium and Hard tyres should enable the cars to complete the 53-lap race with either one or two pitstops.

McLaren has an enviable record in the Italian Grand Prix, having won the race on 10 occasions. As the team celebrates its 50th anniversary next week, it will be hoping to add another strong result to its tally this year.


McLaren at the Italian Grand Prix

“I’ve always loved Monza. I really enjoy circuits that have a bit of history to them, and Monza has that in abundance – it’s one of the greatest tracks on the calendar.

“The place is unique: ever since we lost the ‘old’ Hockenheim, this has been the only place on the calendar where you run a really super-low downforce configuration. And you can feel it – the car accelerates up to speed incredibly quickly, feels skittish and loose when you’re running flat-out, and can be tricky and unpredictable under braking.

“But that’s what makes the place a special kind of challenge, and I really enjoy that. When you have the car hooked up beneath you, you get into a special kind of rhythm around Monza: you’re going so fast that the whole lap just flows together. There’s nowhere quite like it.

“So it’s really appropriate that McLaren will be celebrating its 50th anniversary in the paddock over the Monza weekend. Both names are synonymous with motorsport history – you couldn’t imagine Formula 1 without them – so I’ll be hoping for a strong result to show the strength and depth that we have as a team.”

“Monza is probably the most beautiful circuit in Formula 1 – it’s just so historic; from the moment you arrive, you can feel it’s just different from any other place we visit.

“In fact, I had one of my best races in Formula 1 at Monza last year – everything came right on Sunday afternoon, I looked after the tyres beautifully and overtook Fernando Alonso on my way to finishing second, which equals my best-ever result in the sport. That was a fantastic day.

“After the disappointment of Spa, where we had the pace to score points, I’m keen to get another shot. As in Hungary and Belgium, we don’t expect to have a car that’ll be capable of fighting right at the front, but I hope we’ll be scrapping for points positions. That’s always fun, because then it’s really down to the team and the driver to maximise every opportunity on the day.

“When you’re racing hard like that, a good lap in quali or a clever strategy in the race can make all the difference to your result – and that's great to experience. So, as always, I’ll be looking to push on every lap.”

“This year’s Italian Grand Prix will be a very special weekend for the whole Vodafone McLaren Mercedes team, as it’ll be the race where we celebrate our 50th anniversary – a landmark for any sporting organisation, let alone a grand prix team.

“Since the formation of Bruce McLaren Motor Racing Ltd in September 1963, and our Formula 1 debut at the 1966 Monaco Grand Prix, no F1 team has won more races (182) than McLaren – an incredible record.

“It’s appropriate that we’ll be marking the passage of time at a circuit that is both venerable and yet eternally evergreen: in terms of history, nothing really comes close to Monza in terms of capturing the spirits past of motor racing. Yet, it’s also the fastest racetrack in Formula 1, a temple to raw speed, and a circuit that will always deserve its place on the calendar. It’s richly evocative, and a place that I love.

“We have some special events and surprises planned to mark our anniversary, but it’ll be Monza itself that will make the weekend unique.” 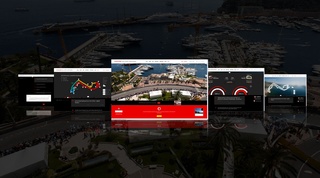 A McLaren 50 classic moment at the Italian Grand Prix

Following a Ferrari one-two in the preceding Turkish Grand Prix, Vodafone McLaren Mercedes is keen to re-take the initiative in the world championship battle at Monza. That’s exactly what happens.

Fernando Alonso takes pole position by just 0.037s ahead of team-mate Lewis Hamilton. McLaren’s lock-out of the front row is followed by the Ferrari of Felipe Massa, who gets even closer to Lewis under braking for Turn One at the start of the race. As Lewis tucks in behind Fernando at the first chicane he gets a tap from Massa and the aerodynamic performance of his MP4-22 is compromised for the remainder of the race.

While Fernando’s lead goes unchallenged, Lewis’s race is compromised further on lap 19 when he’s forced into the pits with a puncture. He drops to sixth place and has to drive very aggressively to regain the lost positions. The highlight of his comeback is a stunning overtaking manoeuvre on Kimi Raikkonen on lap 43.

Maximising the grip from a new set of soft-compound tyres, Lewis lunges up the inside of the Finn at the first chicane and makes the move stick. “I didn’t think I was going to make the corner,” says Lewis later. “The car was completely sideways, but somehow I managed to get it stopped in time. It was a very important point in the race because I knew I had only a couple of laps when the tyres were at their best.”

After 53 laps of hard racing, Fernando wins his first Italian Grand Prix by six seconds. Lewis is second, with Raikkonen a further 21 seconds adrift in third.

Keke Rosberg: The star who failed to shine at McLaren