Monza is one of the most iconic racetracks in the world. Built in 1922 in a royal park north of Milan, the circuit is an eclectic mix of old and new: the crumbling banking that formed part of the original layout still lies adjacent to the modern racetrack, which was the fastest of the 2012 season.

In four places around the 3.6-mile/5.8km lap the cars exceed 200mph. Such relentless speeds force the teams to use low-downforce wing configurations on their cars, which reduce aerodynamic drag while trying to maintain braking stability. Suspension settings are also critical to a quick lap because the cars need a smooth ride over the circuit’s high kerbs to allow the drivers to get the power down early on corner exits.

The vociferous Italian fans, known colloquially as the Tifosi, are sure to give every team a lot of support during this, the last European race of the 2013 season. In 2012, McLaren were one, two on the grid and Lewis went on to take victory. 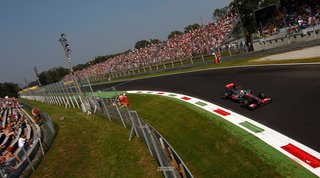 In 1968 Denny Hulme takes up the fight for McLaren in the second M7A and survives a close battle with Johnny Servoz-Gavin and Jacky Ickx to take his first win of the season.

In 1984, Niki Lauda starts fourth and keeps out of trouble to win the race, which is blighted by an unusually high number of retirements. At the end of the race, Niki and second placed Michele Alboreto are the only drivers on the lead lap.

1985 saw Alain Prost’s fifth win of the season. He qualifies fifth and works his way to the front, taking the lead with six laps to go when Keke Rosberg retires with engine trouble.

In 1988 Senna dominated the race, converting his 10th grid start to a lead, until lap 49 and a collision took him out of the race. Had Ayrton won that day, McLaren would have won every race of the 1988 grand prix season.

2007 saw our only one-two finish at Monza to date. Alonso starts from pole and is never headed; Hamilton starts second and looks set to challenge Fernando at the start, but he’s hit by Massa under braking for Turn One and settles for second place.