"We were very unlucky today"

“I started on the Prime tyre, but that quickly grained and gave me problems early on in the first stint. I was happier on the Option.

“Our pace wasn’t too bad, but the last stint was particularly tough. After the final Safety Car, there wasn’t a lot of tread left on my tyres, so getting them up to temperature was very tricky – we struggle with that anyway.

“Into the closing laps, I was vulnerable. All the cars on fresher tyres were fighting to get past, and as soon as I went offline to defend, it became even more difficult to get temperature back into the tyre.

“Hopefully, things can be changed for the next race.

“Finally, I want to say a big ‘thank-you’ to all the fans who have supported us this weekend. Every year, your support seems to grow bigger, and your passion for the sport grows deeper – it has been an honour and a privilege to race in front of such an enthusiastic bunch of people. Your support has truly made my weekend. So, thank you.”

“This was a big shame for the team – we needed this result.

“My race had been going well. I’d been running inside the top 10 for most of the afternoon when my left-rear tyre suddenly exploded. I just felt an explosion along the Hangar Straight – there was nothing I could really do about it.

“The tyres are a big concern. Luckily nothing too serious happened to anyone, but we need to sit down together, get an explanation and get something done.

“Overall, we made a solid improvement through the weekend. We made some useful improvements and showed that our pace is a step forward. Those are all positives to take away.

“We were just very unlucky today.”” 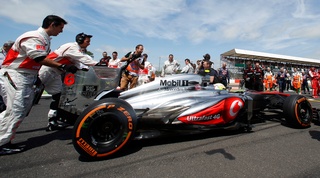 “This was a character-building weekend for Checo, who, through no fault of his own, had to overcome a number of setbacks on both Saturday and Sunday. He drove fantastically well today, showing the steeliness and resilience that has marked him out as such a popular hard-charger.

“He drove well all afternoon, and was set for a deservedly strong points finish. To end his afternoon with another tyre failure was extremely cruel luck. Nonetheless, I’m pleased with the way he has quickly dealt with the adversity; this weekend will make him an even stronger competitor.

“Jenson was unlucky, too. We opted to keep him out during the final Safety Car period. We knew it was going to be difficult to keep him ahead of all the freshly shod cars behind him, but we were reasonably confident that he could still salvage a good result.

“However, our confidence proved to be misplaced; he was unable to get heat into the tyres for the last sprint to the finish and, as a consequence, was powerless to defend, slipping down the order and out of the points.

“I want to pay tribute to the tens of thousands of fans who have supported Formula 1 through all weathers this weekend. It goes without saying that the British fans are the greatest supporters we have, and their ongoing support for our team, even during a difficult weekend such as this, has been enormously gratifying. The fans have been absolutely fantastic.

“Overall, this has been a difficult weekend for Vodafone McLaren Mercedes. However, we’ve learnt some useful lessons, and we’ll be taking them into next weekend’s race in Germany, where we’ll be seeking a better result."

Silverstone through the eyes of a McLaren fan