The ultra-modern Yas Marina circuit hosts round 18 of the 2012 world championship. The track is located on a man-made island on the eastern side of Abu Dhabi and it’s one of five anti-clockwise venues on this year’s calendar. It has several unique features: the pit garages are air-conditioned, the pitlane exits through a tunnel under the track and it has the largest permanent lighting system in the world.

The 5.6km track weaves its way around a man-made marina and has three distinct sectors, each putting different demands on the car. Two high-speed corners start the lap; there are then two very long straights in the middle section and the last sector is tight and twisty. Such variety makes car set-up a compromise between high-speed balance, straight-line speed, good traction and braking stability.

The track surface is made from granite imported from the United Kingdom, and it’s relatively high-grip and hard wearing. Pirelli will take their Soft and Medium tyre compounds to the race and they expect to see a mix of one and two-stop strategies. 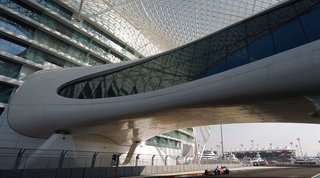 2009 sees Lewis in brilliant form. He takes pole position by a massive 0.6s and beats Vettel into Turn 1 at the start of the race. But his progress soon begins to falter, due to a rear brake problem on his MP4-24 and retires soon after he first pits.

In 2011 Lewis lined up second on the grid. Pole-sitter Vettel retired with a puncture on the opening lap and Lewis disappears into the distance. He comes home eight seconds ahead of Alonso. Jenson is third in the second MP4-26.