"I’m massively proud and extremely happy. I nearly lost my voice because I was screaming so much on the in-lap – not cool at all!

"To overtake both Red Bulls in the race was the coolest thing for me. The backmarkers really came into play today – and, finally, they worked in my favour. I’ve often been caught out when I’ve been trying to get through traffic, but things finally went my way today.

"When Seb [Vettel] was delayed by a backmarker, I knew I had to grab my chance, so I turned the engine up to maximum revs and pushed like crazy. Along the back-straight I went to the to the outside, but Seb closed the door, so I moved to the inside, and he came back towards me. I was very lucky. It was very close.

"What made the difference today between Seb and me? I wanted it more, that’s what!

"I won the last United States Grand Prix, in 2007, so, to come back and win it again – in front of such a great crowd – feels very special indeed. There are a couple of grands prix that are somehow out on their own: there’s Monaco, Silverstone, Montreal, Spa and Monza. Now you can this circuit to that list – it’s already one of the best racetracks in the world, maybe even right up there in the top three.

"It’s a brilliant feeling to be finishing the season on a high. Hopefully, we’ll go to Brazil next week with the same level of performance – I’d love to win my final two races for Vodafone McLaren Mercedes."

"Starting on the dirty side of the racetrack was very tough – I ended up 15th by the end of the first lap. So fifth was probably the best result I could have had. I had a lot of fun this afternoon, and fought a lot of good battles on my way through.

"There was lots of action and lots of overtaking – and most of it was very clean, which was good to see.

"Obviously, however, fifth place wasn’t the result I’d have ideally liked, but the car was working really well, and, with a better grid position, I could definitely have been right up there. Still, big congratulations to Lewis and the whole Vodafone McLaren Mercedes team.

"It was great to race in front of so many fantastically enthusiastic American fans – they looked like they really enjoyed themselves. Before we arrived here, we knew we were going to have to put on a good show, and I think we did just that. There was action and suspense all the way through, which is exactly what you need to create a great sporting spectacle.

"I really hope the US will now embrace Formula 1 at last."

"From the dirty side of the track, Lewis made a very good start but was nonetheless unsurprisingly passed by Mark [Webber], whose P3 grid slot had afforded him appreciably better traction off the line than Lewis had enjoyed from P2. But Lewis quickly caught and passed Mark, and then set about closing the gap to Seb.

"Their battle was long and intense, two great drivers at the top of their form, their cars never more than a few metres apart and often almost nose to tail, but, when Lewis made his move, he made it beautifully. From that moment onwards, try as Seb might to mount a counter-attack, Lewis was in supreme command: right on the limit yet in total control, the man of the match at his brilliant best.

"As for Jenson, he drove an excellent recovery race, handicapped as he had been by a throttle pedal problem in yesterday’s qualifying session that had prevented him from qualifying better than 12th. And worse was to come: at the start of the race he was boxed in by several other cars, dropping further places immediately. Thereafter, however, he drove hard and well, climbing all the way up to fifth position at the chequered flag, having managed his tyre wear superbly at the same time as pulling off some extremely gutsy overtaking moves: 10 world championship points extremely well earned.

"Lewis’s victory was Vodafone McLaren Mercedes’ sixth grand prix win of the 2012 season and McLaren’s 12th grand prix win on United States soil. It goes without saying that we’re utterly thrilled to have won in Austin here today – just as we were absolutely delighted when we won the last United States Grand Prix, in 2007, at Indianapolis.

"Next weekend we’ll be in Sao Paulo, Brazil, and you may be well sure that Lewis and Jenson will be doing their utmost to record Vodafone McLaren Mercedes’ seventh win of the 2012 season over the daunting bumps and turns of the famously serpentine Interlagos circuit. But we’re already looking forward to coming back to Austin next year, and putting on another truly great show, on a truly great racetrack, in a truly great city, in a truly great country.

"Until next year, then, that’s all folks!" 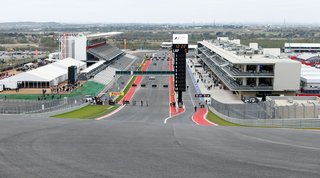 Formula 1 comes back to the USA