“Winning at Monza is one of the greatest experiences of my Formula 1 career. I absolutely love this place: I’ve been coming to Italy to race since I was 13 years old and I just love the culture, the food and the people.

“Since I started in Formula 1, Monza has been one of the races I always wanted to win at – it’s such an incredible, historic circuit and all the great racing drivers have won here. To finally put my name on that list makes me feel extremely proud, but also very humble.

“Our car has been fantastic all weekend, and it was nice to have a relaxed grand prix with no troubles. I was out on my own for most of the race and just tried to manage the gap behind me. I was cruising at the end, but, once I heard that Sergio [Perez] had got past Fernando [Alonso], I had to push a little to keep the cushion over second place.

“The race was very unfortunate for Jenson – we were running first and second at the time and it would have been great for the team if we could have finished like that.

“This championship is proving to be so unpredictable – and I’m so grateful that we’ve got a good car and that we’re in the fight. We’ve got seven more races on the calendar. We should enjoy today, but this victory is just one step. Tomorrow, we’ll start all over again, for Singapore.”

“I had too much wheelspin at the start, and that dropped me to third and caused me to lose a lot of time behind Felipe [Massa]. But it was nice to get past him, put some clear air between us, and then start chasing down Lewis.

“I was never going to challenge him for the win, but it would have been great for the team if we could have finished first and second. But it wasn’t to be.

“I don’t entirely know what caused my car to stop – I’m told it was a fuel system problem that we’re still investigating. The engine cut out and I had to coast to a stop. These things happen.

“But, looking for the positives, I want to offer my congratulations to the whole team. We’ve proven over the past few races that we’re very strong in both qualifying trim and race trim. That consistency is really key, and we haven’t seen that form from any team all season, so that’s very encouraging indeed.”

“In truth, he was in total control throughout all 53 laps, and was never really threatened.

“We should have scored a one-two finish, but Jenson was deprived of an easy second place by a fuel system problem. That’s frustrating for him and frustrating for us, but the important thing is that our car is a winner. We’ve now won three grands prix in a row, and both our drivers are on top form.

“Winning is what Vodafone McLaren Mercedes is all about. In Singapore in two weeks’ time, we’re planning to do some more of it.” 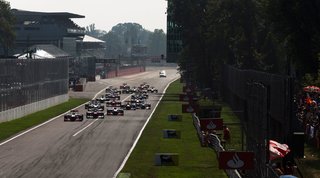