“A podium, a puncture and a new world record”

“I had a really good race and really enjoyed myself out there. I made a good start, pulled off some good moves on both Nico [Hukenberg] and Michael [Schumacher] and had strong pace all afternoon.

“Sebastian [Vettel]’s pass was a pretty straightforward matter: the rules state that you can’t go off the track to gain an advantage. The thing is, there would have been more opportunities for him before the end of the race as my rear tyres were damaged. That’s because I had to push hard to try and catch Fernando [Alonso], which meant I had nothing left for the end of the race. We pretty much ran out of rubber two laps before the chequer.

“There are two strong positives to take away from today: firstly, although it proved very difficult to overtake, we’re right up there with Ferrari and Red Bull in terms of speed. Our upgrade package is working well: if we can sort out qualifying, we’re in the mix, and we’ll have a really good chance of winning races this season.

“Secondly, although there’s previously been some negative talk about our pitstops, the boys did an unbelievable job today. My fastest stop was a 2.31s – the blink of an eye, and, I’m told, the fastest pitstop in history. They were phenomenal and gave it absolutely everything today – all our effort is really paying off now.

“I’m already looking forward to Hungary – it’s a special place for me, and I feel really encouraged that we can have another great race next weekend.”

“My second-lap puncture was incredibly unfortunate: there was debris scattered across the full width of the track and I didn’t have any option other than to drive straight through it. What’s more frustrating is that, at the time, I was the eighth car through – so to be the one to get the puncture is just cruel luck.

“It was immediately clear that my car didn’t feel the same after the puncture. However, after a few laps, I was able to adapt my driving style, and the car had good pace during the middle stint. However, with the damage to the rear, I think we were lucky to get that far, to be honest.

“At least I was able to have some fun out on track – my pace was good enough to be able to match the leaders during the middle stint. And that’s encouraging for me, because we know our car’s been genuinely quick this weekend. A big thank-you to everyone back at the factory for all their efforts to get a lot of new parts onto the car this weekend – every little bit helps, and we know there’s even more in the pipeline.

“We’ll put that pace in our pockets and take it to Hungary next weekend. I’m back in the car in five days’ time – and that’s the best possible news for me after a day like today.”

“A great drive from Jenson today – a little frustrating to have started sixth, which meant he lost time at the start of the race [behind Hulkenberg and Schumacher], but he drove brilliantly to catch and battle the leaders.

“He wasn’t quite able to bridge the gap to Fernando because, frankly, we were saving fuel at that stage, his rear tyres had gone off a little bit because he’d been behind the Ferrari for some time, and also because Fernando’s never an easy driver to overtake. Indeed, Ferrari are doing a great job at the moment – but we know they’re beatable.

“I think it’s important to place some of the credit for Jenson’s second place with our pitcrew: their second stop for Jenson was the fastest Formula 1 pitstop of all time, with a stationary time of just 2.31s. That’s quite unbelievable and not only a testament to our belief in the processes and equipment we put in place to improve our performance, but also to the commitment and determination of the guys on the ground to improve and refine their technique. Well done to everyone for a quite phenomenal achievement!

“Lewis was incredibly unfortunate to be a victim of the Turn One debris – there wasn’t anything he could have done to avoid it. Unfortunately, the puncture damaged the rear of his car, prompting us to monitor the data carefully to track all the vital signs. He had a good push in the middle of the race, but the car got worse and worse so it wasn’t safe or sensible to keep him out there. It’s a terribly disappointing conclusion to his 100th grand prix.

“Looking ahead to Hungary next weekend, we know we’ve got a good car and a good recent track record there – we won in 2005, 2007, 2008, 2009 and 2011. Winning just before the shutdown is always positive because it provides you with great momentum across the summer break. The underlying news is that we were very competitive this afternoon in the Santander German Grand Prix. There’s a lot of races ahead and I think we can have some great results.” 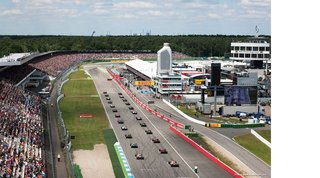