Round six of the FIA Formula 1 World Championship takes place around the streets of Monte Carlo. It’s the shortest, yet most demanding track on the calendar, and the drivers love the challenge of F1’s original street race.

The Monaco Grand Prix was on the inaugural F1 calendar back in 1950 and it’s been a regular fixture since ’55. The layout of the 3.3km circuit has remained largely unchanged, the biggest updates taking place in 2004, when a new pit complex was built.

The track has the slowest average speed of any circuit in F1, but the proximity of the barriers and the lack of run-off make it mentally absorbing for the drivers. Most of the corners are blind and the track surface is often slippery, particularly at the beginning of the race weekend.

Pirelli will bring the combination of its Supersoft and Soft tyre compounds to the race. The teams have yet to race the Supersoft rubber this year, so they will have plenty to learn when practice gets underway on Thursday.

Monaco has been a happy hunting ground for McLaren. The team has taken 15 wins in the Principality, more than any other team, and Jenson and Lewis have each won the race once, in 2009 and 2008 respectively. They’ll be hoping to spray more champagne this year.

“My win at Monaco in 2009 remains one of my favourite victories in Formula 1. Monte-Carlo is a place where every driver wants to win, but achieving it is so satisfying because you know you’ve conquered one of the toughest circuits in motorsport. Winning the Monaco Grand Prix will always be really special.

“I remember last year having a fantastic car beneath me and feeling really confident that I could challenge for the win. As it happened, circumstances beyond our control worked to pull that opportunity away from us, but I go back to Monte-Carlo with a little bit of unfinished business. I’d love to win for Vodafone McLaren Mercedes, the team has a great history around Monaco and I’d love to add my name to McLaren’s Monaco winners’ list.

“This year, we’ll be running Pirelli’s Supersoft compound for the first time – which should be interesting. And while our car isn’t especially suited to the tighter confines of a track like Monaco, I’m optimistic of getting on top of the balance issues that have affected me for the past two races. It’s going to be a fantastic weekend.”

“Monaco is a very special circuit. It’s up there with Silverstone as the place where I most want to do well at.

“Even though Monaco has the slowest average speed of all the circuits we visit in a season, it always feels incredibly quick. That’s because the acceleration is so rapid and the walls so close: there really is no room for error. Apart from the run-off at Ste Devote, and the tiny escape roads at Mirabeau and the harbour chicane, there’s no room to make a mistake. But when the stakes are at their highest, I just find it more exciting.

“Still, it’s important not to lose sight of the fact that, despite pushing for the win, consistency and scoring decent points is currently the most sensible way to tackle this world championship. I’ve scored points at every race, and I’m only eight points off the lead of the championship. That’s a really encouraging statistic and it’s reassuring to see my approach is paying off.

“Nevertheless, I’m coming off the back of two relatively disappointing results and there would be no better place for the cards to fall in my favour than at Monaco.”

“I’m incredibly proud of the team’s record at Monte-Carlo. We’ve won the Monaco Grand Prix more than any other team, and it’s a race we all regard as incredibly special, and integral to the sporting image of Formula 1.

“This is a unique event in so many ways – it places unique demands on the driver, the car and the team. Accordingly, winning in Monaco is considered a more significant victory than a win at other circuits.

“Both our drivers will arrive in the paddock feeling particularly determined this year: Jenson, because he will be determined to set the record straight after losing a victory in 2011 that many felt he rightfully deserved; Lewis, simply because he has been driving brilliantly all season and a victory at his favourite circuit would be just reward for all his speed and commitment.

“For the entire Vodafone McLaren Mercedes team, too, we travel to the south of France feeling determined to string together a faultless weekend and to demonstrate our full potential. I have absolutely no doubts that the team is feeling very strong, and a win at Monaco would be the perfect fillip for their efforts.”

McLaren has an enviable record at Monaco, having won the race more than any other constructor. Here’s how the team defined 15 days in the history of the Monaco Grand Prix.

1. June 3 1984
Heavy rain delays the start by 45 minutes. Alain Prost leads from pole, but he’s overtaken by Nigel Mansell during the early stages. Mansell crashes out on lap 19, leaving Alain in the lead, which is where he stays until the race is stopped on lap 31 due to the appalling conditions.

2. May 19 1985
Alain qualifies fifth, but runs third early on in the race. He inherits the lead when, first, Ayrton Senna retires with a blown engine and then Michele Alboreto spins off at Ste Devote. Prost wins by 7.5s.

3. May 11 1986
A hat-trick of Monaco wins for Alain. He leads from pole position and is never headed en route to the 23rd victory of his career. Keke Rosberg comes home 25s adrift to give McLaren its first 1-2 in the Principality.

4. May 15 1988
McLaren utterly dominates the weekend. Ayrton Senna takes pole position by 1.4s from Alain, who’s 1.2s faster than Gerhard Berger in third. Ayrton then leads the race from the off, but Alain is overtaken by Berger and takes until lap 54 to pass the Ferrari driver. On lap 67 of 78, Ayrton crashes out of the lead, handing victory to Alain.

5. May 7 1989
After the disappointment of the previous year, Ayrton dominates from start-to-finish. He takes pole position by 1.1s and wins the race convincingly from Alain. The McLarens are the only cars on the lead lap.

6. May 27 1990
Another Monaco win for Ayrton. He starts from pole and never looks like being headed in the race. Prost retires from second place with an electrical problem, handing the position to Jean Alesi in the Tyrrell. Gerhard Berger finishes third in the second MP4-5B.

7. May 12 1991
Victory number four for Ayrton in Monaco. He wins from pole position, coming home 18s ahead of Nigel Mansell. His McLaren team-mate Gerhard Berger is unable to repeat his podium of the previous year when he crashes at the Swimming Pool.

8. May 31 1992
Ayrton qualifies ‘only’ third after the all-conquering Williams lock out the front row. He runs second to Nigel Mansell in the race, until the Englishman is forced to pit on lap 71 and rejoins the race 5s behind Senna. A monumental battle ensues, but Ayrton crosses the line 0.2s in front.

10. May 24 1998
Mika Hakkinen wins from pole position. The chances of a McLaren 1-2 end when David Coulthard, running second, retires on lap 17 with a blown engine. That leaves Mika with a 20s advantage over Giancarlo Fisichella, which he manages until the end of the race.

11. June 4 2000
A multi-car shunt on lap one forces a re-start, but that doesn’t deter David. He starts third, but wins his first Monaco Grand Prix by 15s when pole-sitter and early race leader Michael Schumacher retires with a mechanical issue.

12. May 26 2002
A second Monaco victory for David. He qualifies second, but beats pole-sitter Juan Pablo Montoya away from the line and is never headed. He has to withstand late pressure from Michael Schumacher, but drives a faultless race to come home one second ahead.

13. May 22 2005
This is Kimi Raikkonen’s weekend. He takes pole position by just 0.08s from Fernando Alonso, but streaks away during the early laps of the race. All his hard work is ruined by a Safety Car on lap 24, but he charges into an unstoppable lead once again and wins by 13s.

14. May 27 2007
There’s very little to separate Fernando Alonso and Lewis Hamilton. Fernando beats his Vodafone McLaren Mercedes team-mate to pole position by just 0.1s and there’s only 4s separating them after 78 laps of racing. Felipe Massa is third, more than a minute behind.

15. May 25 2008
Lewis becomes the first Englishman to win the Monaco Grand Prix since Graham Hill in 1969. But it isn’t an easy win: there are tricky wet-dry conditions throughout and an early brush with the wall forces Lewis to make an unexpected pitstop for new rubber.

“The most important job today was to try and get a decent high-fuel long-run on the Supersoft tyre – which I don’t think anyone managed. We’ve got to see how the tyre works because its performance will play a considerable role in the race.

“Still, it was nice to briefly stick that tyre on and see how much grip it has – that gives you a bit of information to look over before Saturday, even though we’ll still get to run that compound again before qualifying.

“I definitely feel like the car improved from P1 to P2. We tried something different for this afternoon’s session and I was happier with how the car felt. There’s still room for improvement, but we know what direction we want to take.”

“We didn’t get to learn quite as much as we’d perhaps wanted to today. The weather was clear in the morning, but was quite difficult to dial-in the car because of the changing weather conditions we got this afternoon, compounded by the traffic as usual here. It’s an incredibly tough circuit, very technical, so every little scrap of information helps you understand where to go with the set-up.

“The less running you get, the tougher it becomes to understand the behaviour of the tyres. Today, neither of us got to do a long-run, so we’ll be going into the race slightly unsure about how the tyres will behave. But everyone is in the same boat so I guess it’ll be a bit of a surprise for all the teams.

“Nonetheless, it’s still mega-fun out there; it feels incredible driving this track.”

“Hearing the roar of Formula 1 engines resonating around the harbour front vividly reminds you that no other circuit in the world can match the taut, visceral thrill of Monte-Carlo.

“Unfortunately, the changeable weather conditions – a dry morning followed by an increasingly damp and greasy afternoon – have caused us to be a little less well prepared for the remainder of the weekend than we’d ideally like. But it’s the same for everyone. It’s just another of the unique challenges posed by this most formidable of street circuits.

“I think we’re yet to see what either Jenson or Lewis can achieve when they push the car to its fullest extent around here, but I know that both our drivers relish the challenge of this circuit and that they’ll hit the ground running again on Saturday.

“At the moment, the sharp end of the grid looks extremely close – and it’ll be all to play for in what’s likely to be an absolutely thrilling qualifying session. Bring it on!” 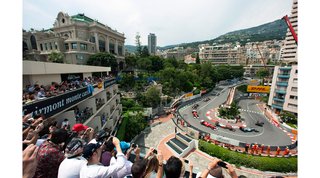