"It was crazy out there!"

"Everyone who took part in today’s race deserves respect – it was crazy out there!

"The conditions were always going to trigger plenty of action, because some cars could generate the required tyre temperatures and others couldn’t. So, for most of the race, you were on a tyre that didn’t feel quite right for the conditions, but for which the lap-times looked okay compared with those of the cars on the other tyre. I spent so much time speaking on the radio to my engineer, Dave [Robson], trying to understand what was going to work and what wasn’t.

"I had a lot of fun racing with Lewis, especially for the first 10 laps. We had a really good, clean fight. It’s a pity he wasn’t still there at the end – but it was nice to have such a great dice with him in our last race as Vodafone McLaren Mercedes team-mates. And I really want to say this: ‘It’s been so good working with you, Lewis. Over the past few years, we’ve driven a lot of great races together. It’s been fab.

"Going back to the subject of today’s race, the Safety Car made life more difficult for us – we lost the 40-second buffer we’d built up – but then the rain really came down, and the race became all about choosing the best time to switch to the Inters.

"Then the challenge altered, and it became all about nursing the car to the end. There was a lot of standing water about, especially where Paul [di Resta] had his accident. I’d been through there on the previous lap and had a big snap too, which was a pretty scary moment.

"Last but not least, congratulations to Sebastian [Vettel]. To win three world championships in a row is a great achievement."

"Huge congratulations to Jenson – and to Sebastian too.

"It’s a shame we weren’t able to seal second position in the constuctors’ world championship together, but we did our best. Congratulations to Sebastian, too – his team kept it together and, under a lot of pressure, they pulled through today.

"Now that the 2012 season is done and dusted, I feel a bit numb. It’s been a day of mixed emotions. I’m sad that I didn’t finish the race, but I’m excited about the future. I’ll miss my friends and Vodafone McLaren Mercedes, but I’m optimistic about what lies ahead for me. I feel comfortable going into this winter because I feel I did a good job this year. I gave 2012 everything I had. I couldn’t have done anything more."

As for today, I don’t remember too much about the accident with Nico [Hulkenberg], but he came to see me after the race, which was nice.

"Jenson drove a millimetre-perfect race today, brilliantly managing the changeable and challenging weather conditions that always bring out the very best in him, and notched up his 15th grand prix victory as a result.

"Lewis was driving equally well when a coming-together with Nico cruelly ended his race. The points we thereby lost were what prevented us from overhauling Ferrari’s constructors’ world championship points total today.

"It would have been fantastic if we could have scored the one-two finish that was clearly within our reach but for that collision, not least for Lewis, whose superb record for Vodafone McLaren Mercedes warrants setting out here: 110 grands prix, 21 wins, 49 podium places, 26 pole positions, 12 fastest laps and 913 world championship points. On behalf of everyone at Vodafone McLaren Mercedes, we wish him well.

"As for Jenson, the superb winner of today’s race, I speak on behalf of everyone at Vodafone McLaren Mercedes when I say how delighted we are that he was able to win here today, thereby book-ending his 2012 season with a magnificent victory to go with his season-opening win in Melbourne. He also won in fine style at Spa, of course.

"And here’s one for the train-spotters: Jenson has now scored more podium places in the three seasons he’s driven for Vodafone McLaren Mercedes [25] than he’d scored in the 10 seasons he’d driven for his previous teams [24].

"So there are many reasons for us to be cheerful today. We’ve won the season’s last two grands prix, both wins the result of our car’s sheer pace, and that achievement gives us an extremely solid platform from which to develop our 2013 car over the next few months in readiness for the new season.

"Finally, congratulations to Sebastian and commiserations to Fernando [Alonso]. Either of them would have been a worthy world champion. But, after a grand prix as thrilling and as suspenseful as the 2012 Brazilian Grand Prix, it’s fair to say that the ultimate winner today was Formula 1™." 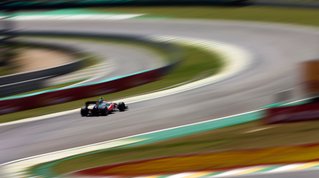 The Fifth Driver in Brazil

“The challenge of Interlagos never diminishes”