Vodafone McLaren Mercedes today pays tribute to test and reserve driver Pedro de la Rosa, who leaves the team he initially joined in 2003 to start a new chapter in his life at Spain’s national Formula 1 team.

Pedro very quickly established himself as a vital part of the McLaren team following his arrival at the team in March 2003. His engineering skills, mechanical understanding and ability to think both analytically and laterally in order to solve problems immediately made him one of the most valued and important test and development drivers in the world.

As a racer, Pedro’s finest moment came at the 2006 Hungarian Grand Prix, where he finished second behind Jenson Button to claim the best result of his Formula 1 career to date at the wheel of the McLaren-Mercedes MP4-21.

But it is as a friend and colleague that Pedro will be best remembered by all of us at Vodafone McLaren Mercedes: his loyalty, enthusiasm, comradeship, team spirit and good humour made him a hugely respected and well-loved member of the team and a friend to us all.

“After more than a decade in Formula 1, I’ll always think of Woking as a second home. I’d like to take this opportunity to thank sincerely everyone at Vodafone McLaren Mercedes for helping me develop into a much more complete driver, and person, than I was when I first joined the team back in 2003.

“Of course, the happiest McLaren moment for me personally was finishing second in Hungary in 2006, but I’m just as proud of helping Lewis [Hamilton] and the team to the 2008 drivers’ world championship – a genuine team effort – and helping to develop a fantastic series of cars that won grands prix throughout my entire time with the team.

“Finally, I want to thank Martin [Whitmarsh] for giving me the opportunity to follow my heart. He’s not only been one of my strongest supporters throughout my career, but also a very good friend to me and my family.

“I regard Vodafone McLaren Mercedes as the best and most professional team in Formula 1 and, while I’m proud to be taking on a new challenge in my life and career, there will always be a special place in my heart for my friends, the hard-working men and women of Woking, for whom I have a huge amount of respect and admiration.”

“Pedro’s contribution to Vodafone McLaren Mercedes has been fantastically valuable – perhaps even more valuable than may be apparent to outsiders in fact – ever since he joined us in 2003.

“As a test driver, he’s been extraordinarily hard-working – on track and, latterly, more often, in our simulator – and his feedback has been reliable and expert. But his contributions have gone wider and deeper than that: Pedro is the archetypal team player, a big motivational presence in our team, and, perhaps because of that, he’s someone whom I personally will always count as a true friend.

“In 2010 and 2011 he drove some races for the Sauber team – and, although he’s always approached his test and development work with McLaren with energy and enthusiasm, he remains a racer at heart. For that reason, we understand and support his decision to join HRT as a race driver, and we wish him well. It goes without saying, however, that he’ll be missed.

“Having said that, we’ll continue to be well served by Gary [Paffett] and Oliver [Turvey], both of whom will continue their excellent test and development work for us in Pedro’s absence.” 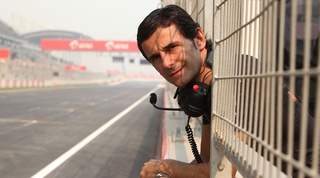