Having won seven Formula 1™ Grands Prix in 2012, Vodafone McLaren Mercedes moved past a significant record. We’ve now won 182 GPs, two more than any other constructor has achieved since Bruce McLaren made our Grand Prix debut at Monaco on May 22, 1966. That’s one in four of all the Grands Prix we’ve started.

Jenson Button claimed our first victory of the year at the opening round in Australia, setting fastest lap in an exciting race where a Safety Car deployment reduced his 10-second lead to nothing. Excitement was the watchword in the races that followed, too, as each Grand Prix unfolded unpredictably – and with a different winner each time. Lewis Hamilton was on pole position in Australia and Malaysia but in this topsy-turvy season he stood on the top step of the podium for the first time in Montreal.

The Canadian Grand Prix was a significant one for Vodafone McLaren Mercedes because it was the 300th race since the start of our partnership with Mercedes-Benz, ExxonMobil and Enkei in 1995. Fittingly, Lewis won it with one of his signature combative performances, making a two-stop strategy work and passing two double World Champions to seal the victory.

Lewis also recorded our next win, as well as claiming our 150th pole position, at the Hungaroring, but before then Jenson played a part in another piece of F1™ history. On his way to second place at Hockenheim he was serviced by the Vodafone McLaren Mercedes pit crew in just 2.31 seconds, the shortest time an F1™ car has ever been stationary during a tyre change.

Jenson and Lewis then won in Belgium and Italy, the latter win taking us to the point of 180 victories since the 1966 Monaco Grand Prix, equalling Scuderia Ferrari’s tally since that race. And while Jenson missed the podium at the Indian Grand Prix he notched up our 150th fastest lap. A fuel pump failure ruled Lewis out of the Abu Dhabi Grand Prix but not before he had taken the total distance led by McLaren in the Formula 1™ World Championship past the 50,000km mark.

We want to win every race we start so we never stop improving our cars until the very end of the season, even if the drivers’ and constructors’ titles are out of reach. That’s why were we delighted to end the season in such competitive form, with Lewis taking on Sebastian Vettel in a wheel-to-wheel battle at the new Circuit of the Americas in Texas and beating him into second place, then taking our 155th pole position and 151st fastest lap at Interlagos, the final round.

The 2012 Brazilian Grand Prix was a record 62nd front-row lock-out for us, and both of our drivers judged the changing conditions brilliantly to run at the front of an action-packed race that was anybody’s to win. Lewis was unlucky to be eliminated in a collision with another driver but Jenson demonstrated his mastery of wet-dry races to claim a memorable win, our 182nd.

Brazil was also our 58th consecutive points-scoring finish – Scuderia Ferrari previously held the record with 55 – which goes all the way back to when Jenson joined us at the beginning of the 2010 season. 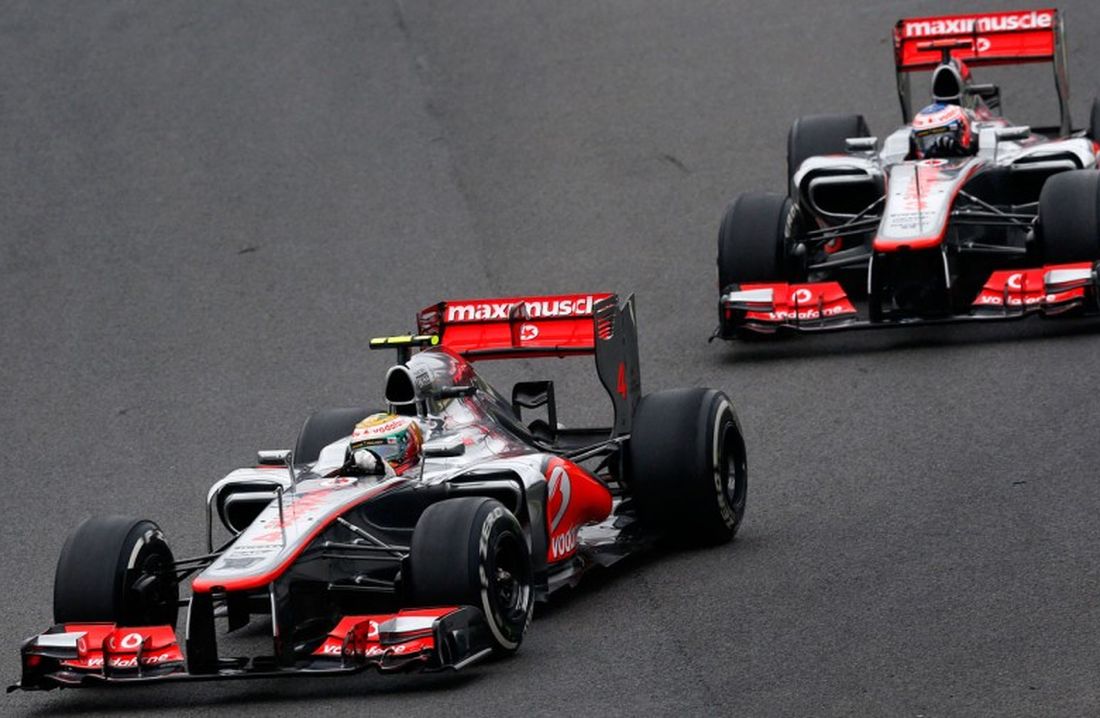