You can sum up the Yas Marina circuit in one word: spectacular. The architecture is right at the cutting edge, with imaginative touches such as the illuminated glass roof of the hotel and the unusual pitlane which threads its way back to the circuit via a tunnel. It’s a thoroughly impressive racing venue.

When Vodafone McLaren Mercedes arrived here for the first Abu Dhabi Grand Prix in 2009 we were on a strong upswing in form after pushing the development of the MP4-24 very aggressively. Lewis Hamilton had scored more points than any other driver since the German Grand Prix in July, and he was determined to sign off the season with a race win.

We hit the top straight away, with Heikki Kovalainen and Lewis first and second quickest on the opening day of practice. But since track conditions always evolve over the course of a grand prix weekend, especially so at a new venue, we couldn’t rest easy.

Qualifying brought mixed fortunes as a gearbox malfunction caused Heikki to stop in Q2, but Lewis was on flying form: half a second quicker than anyone else in Q1 and then 0.3s up in Q2. His first Q3 lap was electrifying, all the way until Turn 17. He carried a fraction too much speed into the corner and ran wide.

Mentally logging the error but not disheartened by it, Lewis had another go and this time the lap was perfect: smooth, neat and nearly 0.7s faster than his nearest rival.

Lewis converted pole position into the race lead, and everything was looking good until our sensors detected that his right-rear brake pad was wearing too quickly. The Red Bulls of Sebastian Vettel and Mark Webber were close behind, and it was clear that we could not allow Lewis to engage in a risky battle for the lead if a component failure was imminent. Frustratingly, we had to radio Lewis to come in and withdraw from the race.

Abu Dhabi also rounded off the 2010 season, and this time Lewis had a mathematical shot at the drivers’ title. It was an outside chance – a deficit of 24 points to Sebastian Vettel meant Lewis would have to win and Vettel fail to score – but after the events of 2008 Lewis knew, more than anyone, that the battle for the championship isn’t over until the final lap.

Jenson Button, who had fallen out of contention for the title at the previous round, knew that this would be his last race with the number one on his car (for 2011 at least) and he was determined to finish the year in style. Both our drivers, then, were supremely motivated.

After a year in which the Red Bull team had regularly had the strongest technical package, qualifying was a close-run thing. Lewis missed out on pole by three hundredths of a second but he wasn’t disappointed – in fact, he was ecstatic because he believed he had extracted the full potential “and more” from his car. “I’ve got nothing to lose and everything to gain,” he said.

Having qualified second and fourth, the Vodafone McLaren Mercedes drivers quickly consolidated the podium spots, resisting the temptation to make early pitstops after the Safety Car was deployed on the second lap. Lewis could match Vettel’s pace but not get close enough to pass him, and after making his pitstop he was held up behind the Renault of Robert Kubica, which put paid to his chances of catching up.

Jenson pitted later than the leading duo and therefore led the race until making his own stop, ultimately finishing third behind Vettel, the new world champion, and Lewis.

Team principal Martin Whitmarsh summed up the feeling: “This evening's podium was a significant one from a historic perspective: the three most recent world champions, standing shoulder to shoulder, and I'm glad to say that two of them were in Vodafone McLaren Mercedes colours.” 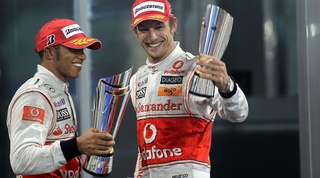