Winter testing began last week at the Circuit de Barcelona-Catalunya. The two weeks of track running mark the final act in what is frequently referred to as the Formula 1 ‘off-season’. There’s an implication in there which suggests the sport goes into some form of hibernation between the final race of the year in Abu Dhabi, and the first in Australia. It’s really not the case.

While members of the race crew may get a few well-deserved weeks off over the (northern hemisphere) winter, back at the McLaren Technology Centre (MTC), these last few months are perhaps the busiest of the year, with the entirety of McLaren Racing tasked with preparing the MCL34 for its circuit debut with Carlos Sainz and Lando Norris.

The spotlight is rarely shone on the team at the factory – but the contribution is no more and no less important. While a rapid pit-stop, bold overtaking move or decisive strategy call earn the plaudits, successes are just as dependent on engineering an upgrade in record time, manufacturing high-quality components, and carrying out stringent analysis and simulation. Every part of the operation needs to work in harmony to see progress on a race weekend. This is the ultimate team sport.

There exists a sense of legacy in what we do. It isn’t driven by the trophies or the classic cars on the McLaren boulevard, it’s threaded through the people, from those hired by Bruce, right down to the latest intake of apprentices and graduate trainees.

We are a team together. And these are some of the stories from HQ.

Barry Ultahan has near-legendary status at McLaren. As a race team mechanic in the 1980s, he worked on some of the finest racing cars McLaren have ever produced, with drivers including Niki Lauda, Alain Prost, Keke Rosberg and Ayrton Senna. At the end of the decade he ‘retired’ from the race team to specialise in gearboxes, working primarily on the test team. Since 1999, he’s been in the gearbox shop – though still appearing in the garage from time to time.

Barry’s career in motorsport began in the late 1960s. “I was an apprentice at a car dealership – but I was aching to get into racing,” he recalls. “There were a few local teams where I lived and so I knocked on doors, asking if I could help out at the weekends. I started off polishing cars, collecting tyres and fuel, the general dogsbody stuff!”

The volunteering eventually led to a job working on Howden Ganley’s McLaren M10B in Formula 5000, and then into F1 with Frank Williams Racing Cars and Brabham, plus spells in IndyCar before settling at McLaren. “It’s been,” says Barry, “an amazing career.”

These days, he manages parts, and some of the ancillary requirements of the gearbox shop, such as producing set-up sheets. In common with many of his generation, he’s also called upon from time to time to help solve problems with the 200+ cars of the classic McLaren collection, any of which might be displayed or given an outing on track. His input does, however, stretch to the newest addition, having constructed some of the sub-assemblies for the MCL34. At its unveiling the new car got a nod of approval. “I think it’s one of the nicest-looking cars that we’ve built. Seeing it there on the turntable, it really looks the business.”

Amelia, Filip and Barry at the launch of the MCL34 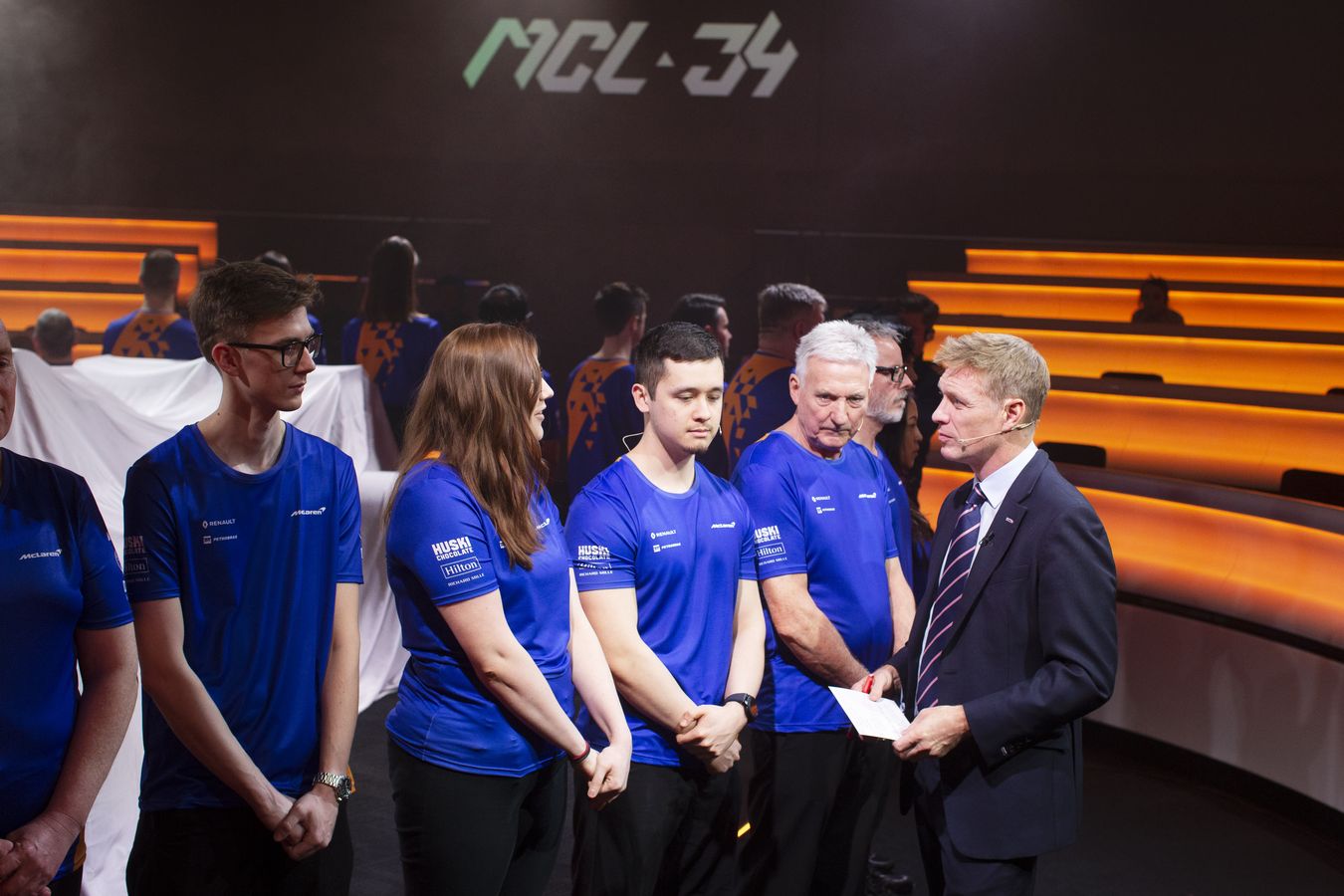 Amelia, Filip and Barry at the launch of the MCL34

While Barry can name which specific components of the MCL34 he’s been involved with, Filip Dao Anh has lost count. As a programmer and operator of five-axis CNC Mazak machining centres, the numbers are huge.

“The main machine shop is never quiet – but what we call the winter build is the most hectic because we’re building a complete car,” he explains. “We don’t recycle anything from previous years, so thousands and thousands of parts, some going through several generations, have to be made.”

Formula 1 teams manufacture most of their components in-house. The fast pace of design means the car never runs in the same specification twice, with a constant stream of new parts arriving every week, sometimes every day. The manufacturing operation has to work at the same tempo as the design effort, and so a small army of machinists work around the clock to realise the latest upgrades. The speed at which this operation works translates directly into lap time. The Mazak machines are operating constantly, milling titanium, steel, aircraft grade aluminium – but also engineering plastics and carbon composites. Everything on an F1 car is a prototype – which means the programmers and machinists are always busy.

For many McLaren staff, working for a Formula 1 team is the culmination of a long-held dream – but it isn’t always the case. “My initial goal was to join British Airways and work as an aircraft maintenance engineer,” says Filip. “I was studying at Farnborough College of Technology, doing a Level Two general engineering diploma when McLaren came to the college to recruit apprentices. After some work experience, I was chosen for the apprenticeship programme. That lasted four years, working at the MTC with a day-release programme to complete the Level Three diploma, and I finished three years ago.”

An interesting quirk of architecture at the MTC is that apprentice machinists really do start at the bottom, learning the basics of machining on three-axis milling machines on the lower level, progressing to more sophisticated equipment on higher floors. The main machine shop is adjacent to the spectacular Boulevard, sharing space with the race bays where the car is constructed.

“We can see the car build as it progresses,” says Filip. “There really isn’t time to watch it coming together – but it is nice to see the parts you’ve made being fitted.” 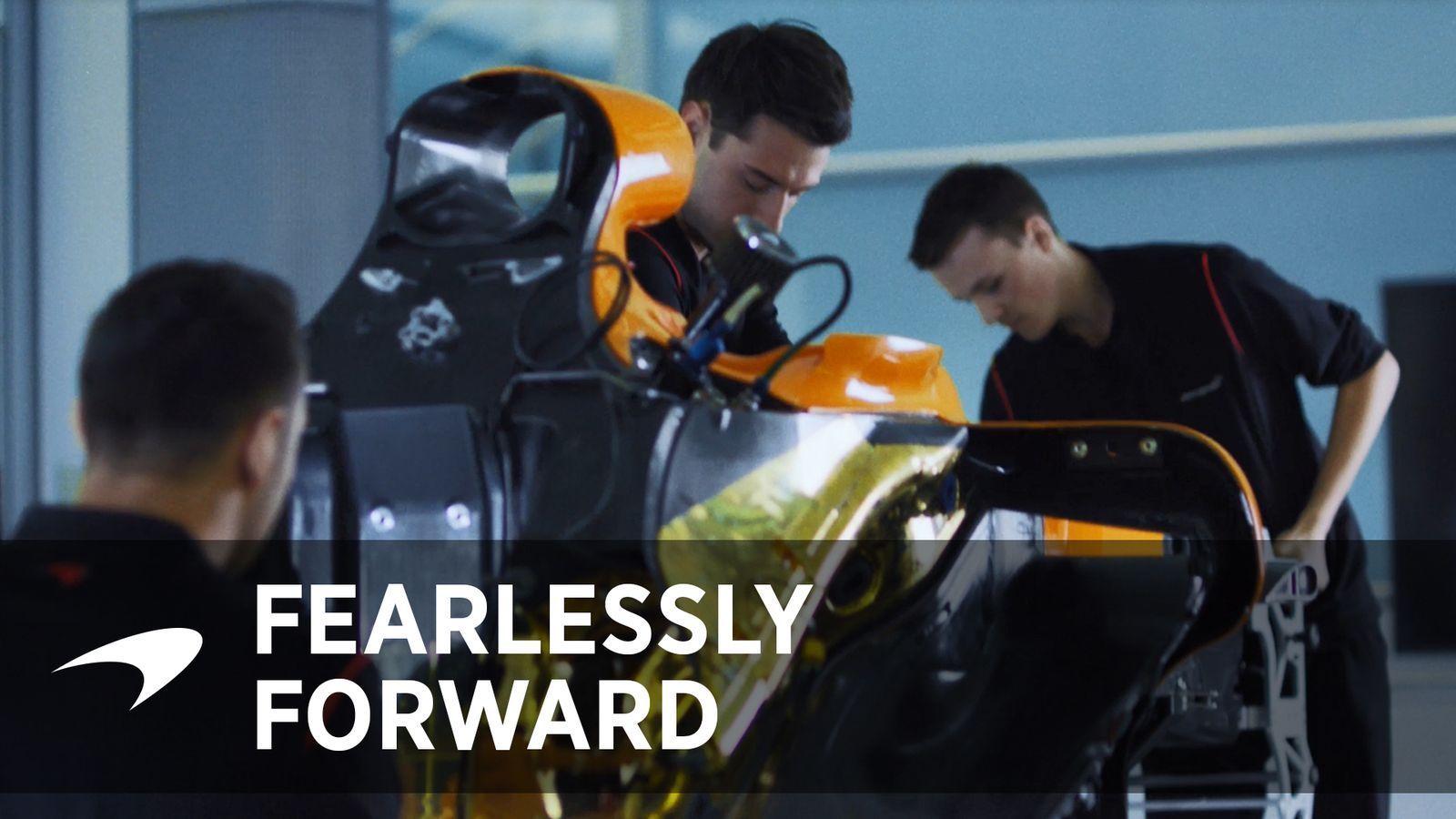 It’s tempting to imagine that, before the car is built, the drivers, race engineers and the vehicle performance group have little to occupy their time. In practice, the winter months see the driver-in-the-loop simulator heavily employed to provide the baseline that ensures the team hits the ground running on the first day of testing.

“It has been very busy,” says performance engineer Amelia Lewis. “Both Carlos and Lando are keen to spend a lot of time in the simulator. They’re both very motivated to drive the performance forwards and help the team however they can over the winter.”

Amelia has just completed two and a half years on the graduate engineer scheme, completing a series of placements around the team. As of January 1st, she’s chosen to specialise in the vehicle performance group, working as a performance engineer in the simulator.

“I’ve always been a huge F1 fan, but I don’t think I really considered a career in racing until university. In school I enjoyed maths and physics, so taking an engineering degree felt like a natural step. It was only when McLaren gave a talk at my university that I realised working for a racing team wasn’t an unattainable dream but something I really could do – I then went off and did my industrial placement year at Williams!

“That gave me the bug, and when I returned to university I joined the Formula Student team, Team Bath Racing and spent 18 months building a race car with a close group of friends to race around Europe. After that, I knew a normal office job wasn’t for me. I needed the high intensity of working in motorsport.”

During the racing season, the simulator fulfils a number of different roles. It functions as a virtual ‘third car’ during F1 practice sessions, providing guidance by making set-up changes at the touch of a button that would eat into the limited running time at the track. At all other times it, and the engineering team assigned to it, are tasked with general development work, running simulated cars on a virtual race track. At this time of year, eager though the drivers are to spend time in the sim, they really would rather be getting to grips with the real thing.

“The problem is that our route from the simulator to the canteen goes past the race bays, and every time Carlos walks past, we have to drag him away from the car build,” explains Amelia. “He just wants to look at the progress and talk to the mechanics about what’s going on – that said, it has been really nice seeing the MCL34 come together before you. It’s what we’re all here for.”

We push fearlessly forward together as a team with the MCL34

A night to remember