Relentless technical innovation, the quest for perfection, and a perpetual hunger for progress

Relentless technical innovation, the quest for perfection, and a perpetual hunger for progress

Relentless technical innovation, the quest for perfection, and a perpetual hunger for progress are the common factors that link McLaren-Honda and Richard Mille.

Working together, they have produced a new technical masterpiece offering off-the-charts mechanical performance.

The RM 50-03 Tourbillon Split Seconds Chronograph Ultralight McLaren F1 weighs less than 40 grams – including its strap – making it the lightest mechanical chronograph ever made. It’s a landmark that’s been achieved through the use of cutting-edge technical materials – titanium, carbon-fibre, and the introduction of an entirely new material into the world of watchmaking: Graph TPTTM, composed of Carbon TPTTM and a newly discovered material called graphene. 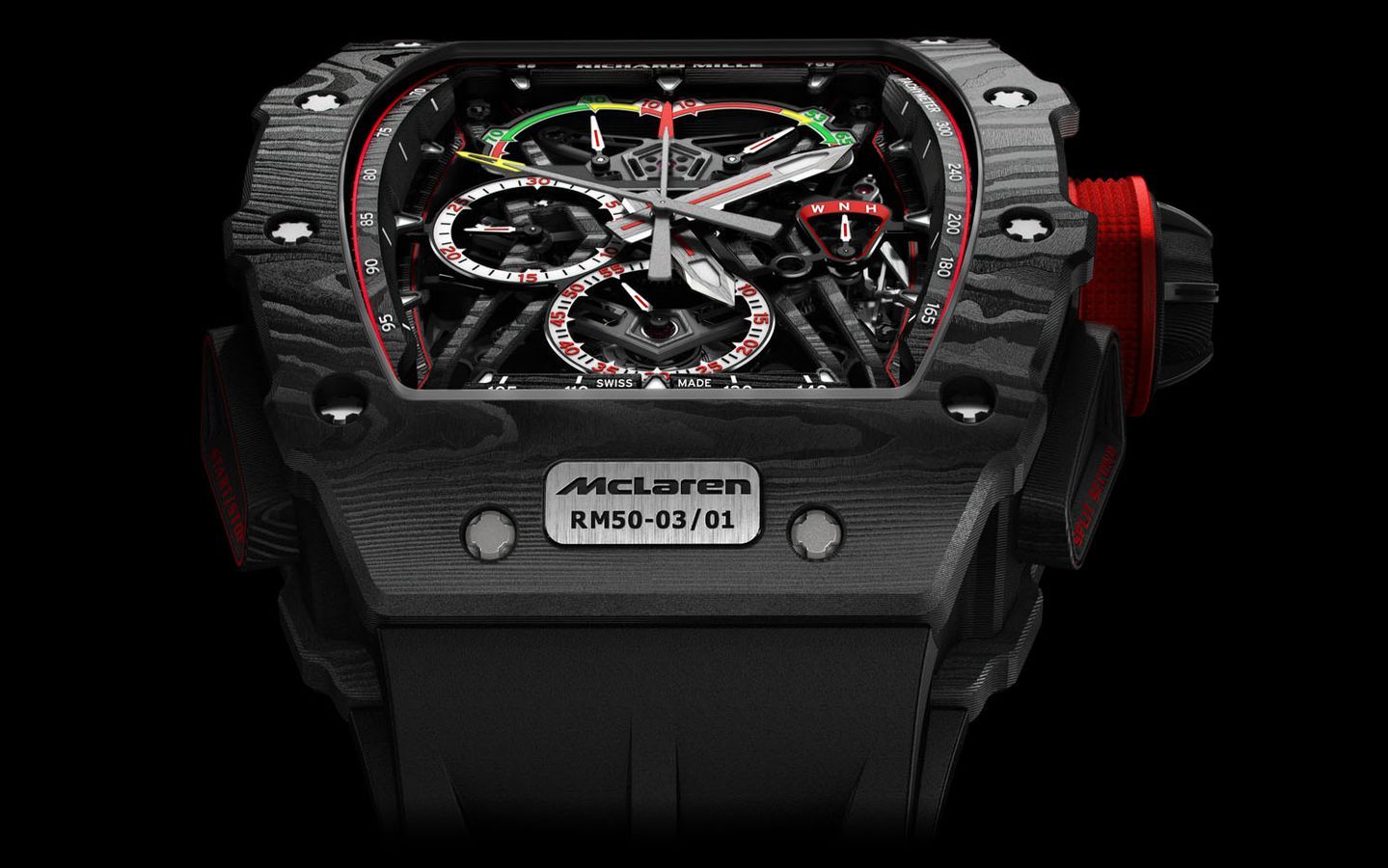 This revolutionary nano-material is six times lighter than steel, and 200 times stronger. McLaren’s investigations into the properties and applications of the material enabled Richard Mille to introduce it to the watch-making world.

“We couldn’t have dreamt of a more fitting partner in terms of image than McLaren. It’s an organisation that strives to achieve perfection – whether it be in research and development, aesthetics or execution, right down to the smallest detail. With our 10-year partnership, we’re really only at the beginning of exploiting the opportunities and know-how that exists between both our companies.”

“We’re absolutely delighted to be able to celebrate the collaboration between McLaren and Richard Mille with such a stunning and cutting-edge piece of watchmaking. The RM 50-03 really is a world-first: the lightest mechanical chronograph ever made, and the first watch in the world to incorporate graphene. Like McLaren, the Richard Mille brand is all about seizing every opportunity to challenge our prevailing notions about technology: in such a short period of time, Richard and his team have created a unique niche for themselves in the horological world, and this new watch pushes them even further ahead of their contemporaries.” 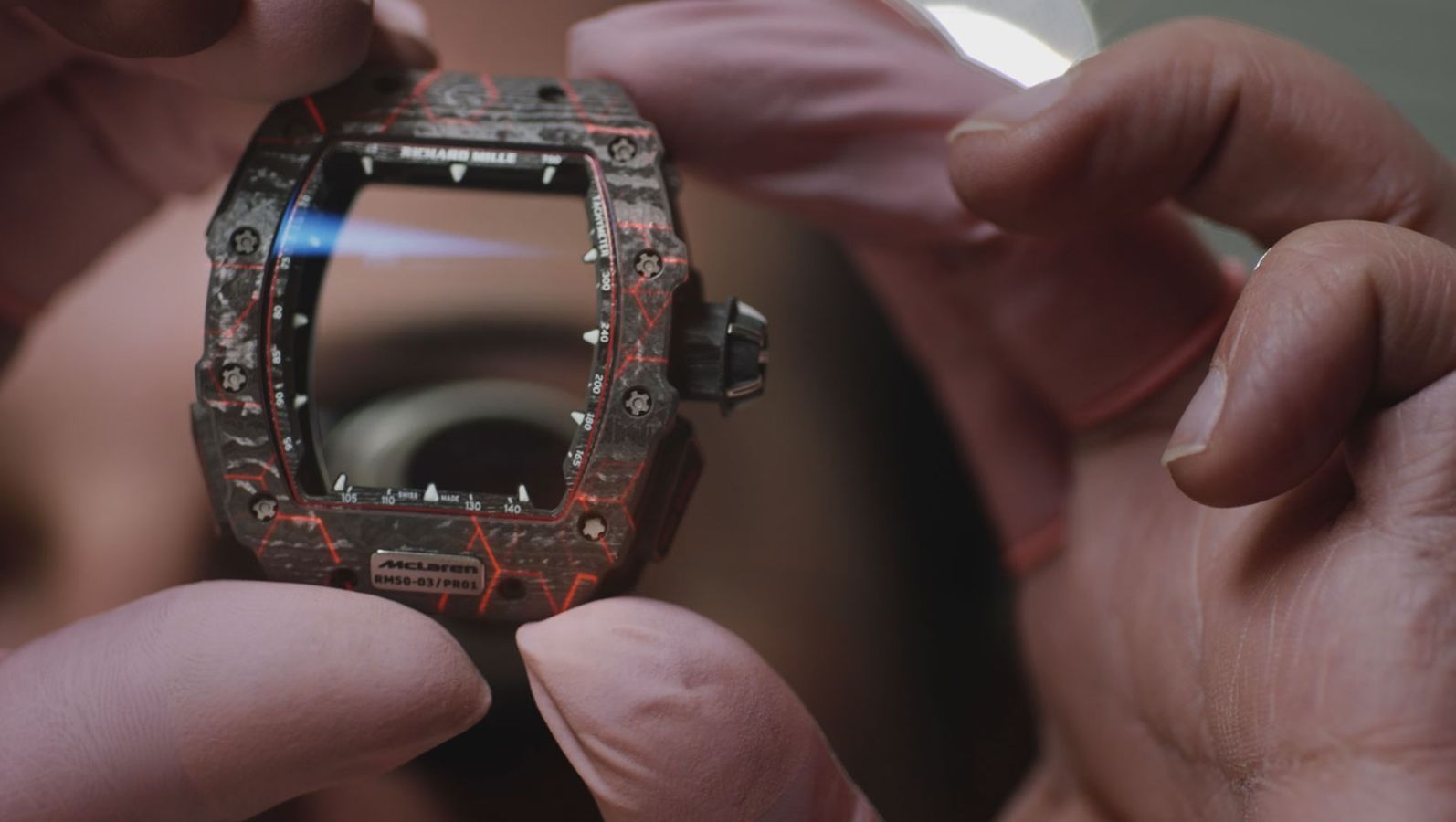 “While Formula 1’s technical regulations prohibit the exploitation of some nano-materials for legitimate cost reasons, the development of materials, such as the graphene family of structures, provide an exciting and increasingly cost-effective solution to some of the sport’s most demanding challenges.

“McLaren, Richard Mille, and The University of Manchester’s National Graphene Institute are all learning and working together; we’re looking at a number of emerging technologies, including the 3D printing of carbon-fibre, nanotechnology and surface-coating technology.

The RM 50-03 McLaren F1 will be produced in a numbered limited edition of 75 pieces and will be available only at Richard Mille boutiques. Each watch will be accompanied by a 1:5 scale model of the 2017 McLaren-Honda car driven by double-world champion Fernando Alonso and Stoffel Vandoorne.