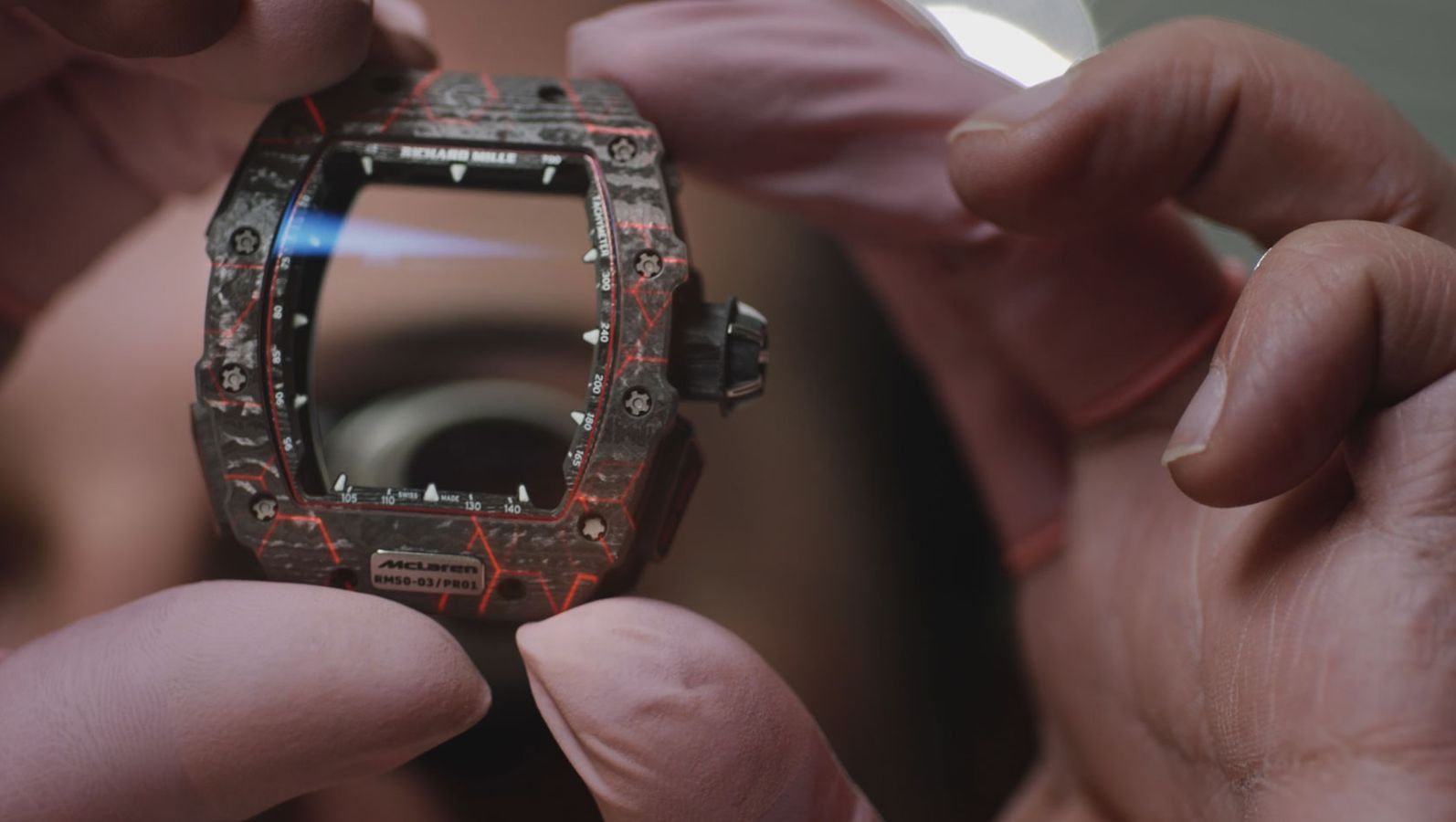 A racing machine on the wrist: the story of graphene

A racing machine on the wrist: the story of graphene

You probably also clocked the uniquely liveried McLaren-Honda showcar hanging from the rafters at the firm’s stand at the SIHH expo in Geneva, Switzerland. Nice, huh? Colourful…

And you may have read that at a mere 40 grams, the RM 50-03 has been hailed as the lightest mechanical chronograph ever made. And that achievement was all made possibly by the use of a miracle new nano-material called graphene – six times lighter than steel, yet 200 times stronger.

So far, so good; but if, like us, you were probably wondering what makes graphene so unique, we thought you might want a little more contextual advice.

Our resident graphene spokesman (and also Group COO) Jonathan Neale steps in to tell you everything you always wanted to know about graphene, but were afraid to ask:

So, Jonathan, what is graphene?

“There’s a lot of confusion in the marketplace about graphene, particularly in materials science, where it’s being touted as the next big step. When people talk about graphene, they’re not talking about a bulk material – you don’t get blocks or rolls of graphene – it exists at an atomic level, but can used to strengthen, toughen, and lighten carbon-fibre composites.

“Technically speaking, graphene is a single layer of carbon atoms arranged in a 2D hexagonal lattice, but for practical purposes, it comes in all sorts of forms, each having various advantages and disadvantages, depending on the application. And the process through which graphene is used to enhance resin systems is called nanoplatelet reinforcement.”

Can you simply explain nanoplatelet reinforcement?

“Yes, graphene is infused or mixed into resin systems, and those resin systems, for the application of creating carbon-fibre composites, are then combined and cured with layers of carbon-fibre. A graphene nanoplatelet is a small flat shape – very small, microscopically small, in fact. When you put those platelets into a resin system and mix it with your normal carbon-fibre layers, you greatly increase the inter-laminar bond strength, amongst other mechanical properties. Previously, when you relied on regular resins to hold the carbon-fibre layers together, there’s the possibility that those plies could shear apart – a common and well-known Achilles’ heel of composites. By introducing other structures within the resin, you can increase the shear toughness.”

How much of a step forward is graphene technology?

How has McLaren been collaborating with Richard Mille?

“McLaren’s work with Richard Mille has focused on two specific areas of the watch: the first is the casing, which is made of a very thin-ply carbon-fibre. It’s such an intricate and delicate structure – but incredibly strong and light because of the graphene infusion. In fact, our design lab at McLaren Applied Technologies works with the National Graphene Institute, based at the University of Manchester, and has helped blend a particular type of graphene into the case structure. The thin plies of carbon create some beautiful textures and contours, because everything has been slimmed down to a high degree.

“The second area of development was in the polyurethane strap, which is obviously still soft and pliable, but has also been strengthened by enhancing the resin system with a different graphene infusion.”

Are there natural similarities between horology and Formula 1 construction?

“There are clear parallels in terms of R&D, material science, and high-end manufacturing, of course. But perhaps the most interesting crossover is the fact that both industries need to consider and accommodate the role of the human being – either the watch’s wearer, or a grand prix driver – when designing and working with high-end materials.”

“So while the watch itself is incredibly strong and light, you’re creating something that’s a blend of both engineering and artistry; you’re not necessarily looking for the most absolute qualities, you’re looking to match those with the requirements of the wearer.”

“In Formula 1, our carbon-fibre construction techniques mean we could significantly increase the stiffness and strength of the monocoque, but that would substantially increase the loadings on the driver, which we want to avoid. And that’s why every Formula 1 car is mandated to incorporate deformable crash-proof structures around the car; they’re designed to progressively deform to best protect the driver.

“So you can see that, in both our worlds, you’re not chasing the most absolute of values, but creating something that blends the requirements of man and machine – and that’s actually a far tougher objective to meet.”