From the beginning, K-Swiss has been driven by an entrepreneurial spirit, when two Swiss brothers moved to California to create a footwear brand focused on tennis.

As avid skiers, the brothers took inspiration from leather ski boots to create tennis shoes that supported the aggressive side-to-side movement. Introduced in 1966, the K-Swiss Classic was the world’s first all-leather tennis shoe. It quickly gained worldwide acclaim and became a style statement both on and off the court, worn casually in country clubs and just as fashionably on city streets.

Now, 57 years later, K-Swiss is building from its heritage as an American tennis brand and writing new chapters in its storied history. Paying homage to the hard work of our founders and the competitive nature of the game that inspired it all, K-Swiss is dedicated to outfitting and inspiring the next generation of tennis players. 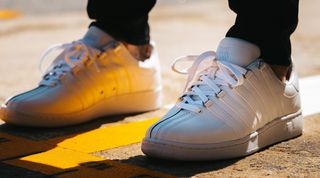