The search for our ultimate driver line-up is now well underway, as McLaren’s 16 most successful drivers have been whittled down to eight thanks to your votes. But just who has made it through to the second round?

Well, now that we’ve finally caught our breath from last week’s polling frenzy, here’s a recap of what happened in the first round and who needs your votes this week to stay in with a chance of being part of the #McLarenUltimateTeam. 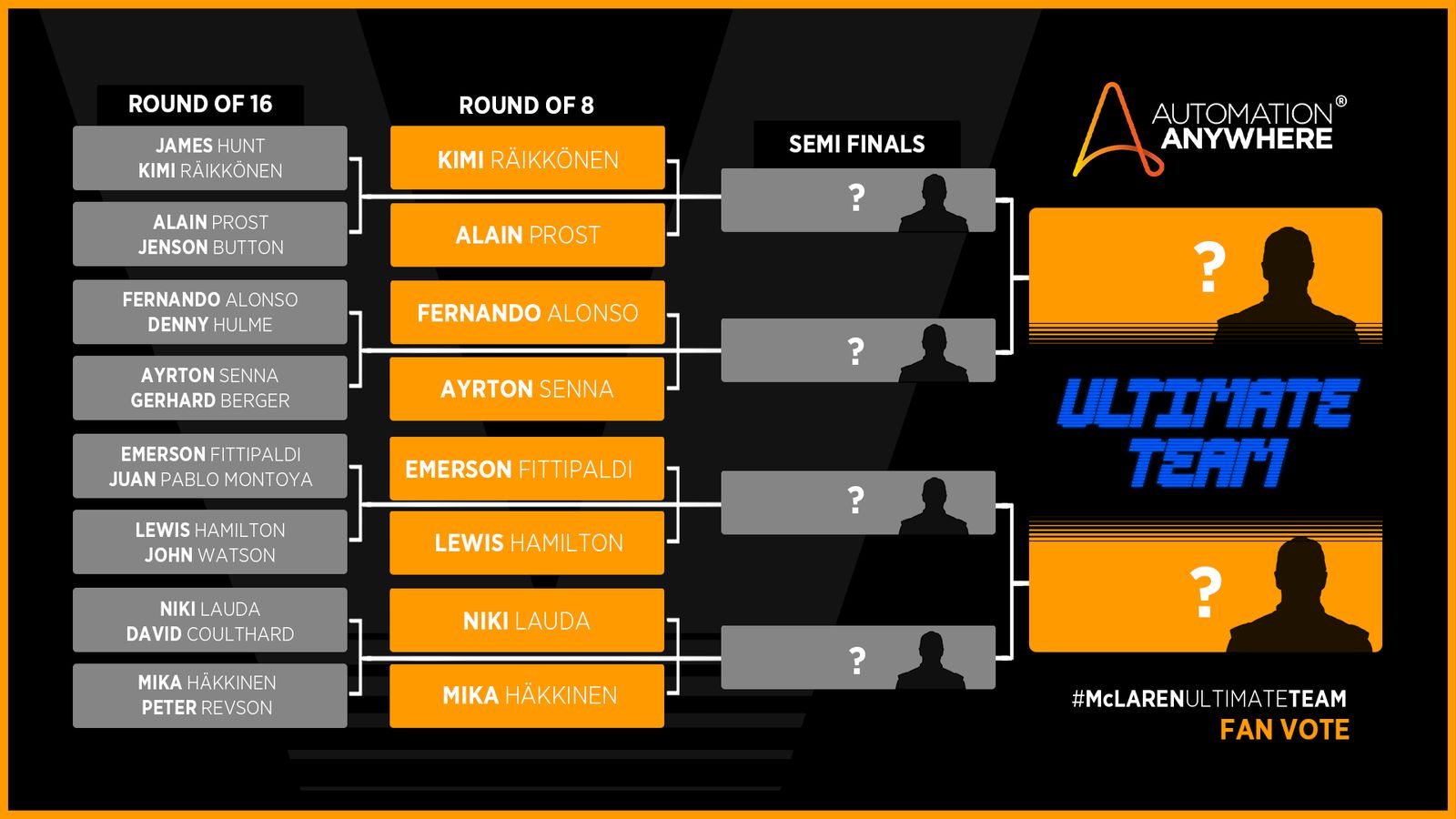 Let us break it down for you...

We suspected our first head-to-head would be particularly evenly matched given that Kimi and James share many similarities, including the same tally of F1 wins with McLaren, a penchant for an alcoholic beverage or two, legions of fans, and, of course, an abundance of raw speed behind the wheel. On Twitter, @daniellearmouth arguably summed the dilemma up best: ‘It's like choosing between your favourite child, oh man...’ But in the end, you guys gave Kimi the clear nod to progress, securing 61% of the vote.

Although Jenson put up an admirable fight (particularly on the McLaren App where he outscored Alain), as the most dominant driver of his era with 51 race victories and four titles, Alain had just enough in hand (52%!) courtesy of his lead in the polls on Twitter and Instagram to advance to the next round.

We love Denny. Who doesn’t? His lambchop sideburns alone are the stuff of legend, but more than that he galvanised the team after Bruce’s death, scored six of his eight F1 victories while at McLaren and played a pivotal role in the team’s Can-Am success. Nevertheless, 88% of the public has spoken and deemed Fernando Alonso the runaway winner of this contest, which wasn’t entirely surprising given his exploits on track that amount to a phenomenal racing CV.

Another contest that proved to be something of a formality for one of the contenders. Despite being one of F1’s most enduring drivers, Gerhard was no match for his great friend – and quite possibly the greatest driver of all time – Ayrton Senna. The Brazilian legend came out on top by a landslide with a mega 94% of the vote on this occasion.

Our next head-to-head saw another Brazilian looking to triumph, and although Emerson did emerge victorious, it was a far closer affair. But then again, we expected nothing less. Juan Pablo has been a fierce competitor throughout his career and has the results to back it up. Nevertheless, it just wasn’t enough to topple the Brazilian champion who was picked by 65% of the fans.

This was always going to be a tough one for Watson and so it proved, even despite Watty’s excellent track record against McLaren team-mates such as Alain Prost and Niki Lauda. Lewis Hamilton has become something of a serial winner and the result of this match-up was no different for the six-times world champion, who commanded 84% of the vote across Twitter, Instagram and the McLaren App.

Despite David contesting more races for McLaren than any other driver, bagging 12 victories with the team, spending much of his time up against a formidable team-mate in Mika Häkkinen and storming to a memorable second place in the 2001 championship behind Michael Schumacher, it just wasn’t enough to overcome the might of three-times world champion Niki Lauda. The last of Niki’s titles came on the back of his remarkable return from retirement to race for McLaren. A legend in the eyes of many, it turns out this contest was Niki’s for the taking at 85%.

If Niki’s first round triumph was straightforward, Mika’s, by comparison, was a walk in the park. The Finn secured 95% of the vote, beating Peter Revson fair and square. Although Peter only made 30 F1 starts before his untimely death, he certainly made his mark in the world of motorsport, with two grand prix victories for McLaren, pole position for the team in the Indy 500 and winning the 1971 Can-Am title. However, he had is work cut out up against Mika, one of McLaren’s all-time greats. The Finn’s 20 grand prix wins and two drivers’ titles proving just too much to handle.

After the first round of voting, your remaining contenders for the #McLarenUltimateTeam are: Kimi Räikkönen, Alain Prost, Fernando Alonso, Ayrton Senna, Emerson Fittipaldi, Lewis Hamilton, Niki Lauda and Mika Häkkinen. These eight drivers are set to battle it out this week for a spot in the final four and need your votes to get there.

The first of the Round of 8, Niki Lauda vs Mika Häkkinen, gets underway on 12 May, so be sure to have your say by voting via our Twitter and Instagram channels, as well as the McLaren App.

And while you continue to vote, in your thousands no less, the bot created by our friends at Automation Anywhere is hard at work crunching the numbers from 54 years of grand prix history to statistically determine the ultimate McLaren team. It means that soon we’ll be able to show you how the results from our polls compare with the data-driven outcomes determined by the machine.