A Formula 1 team never rests. And although the Brazilian Grand Prix remains a recent memory, the McLaren Formula 1 team is already powering ahead with preparations for 2014.

For our new driver, Denmark’s Kevin Magnussen, it will be a particularly busy period. The newly crowned World Series by Renault 3.5 champion is gearing up for his maiden grand prix season by spending the winter preparing with his engineers, mechanics and trainers at the McLaren Technology Centre in Woking, Surrey.

These are the days and hours that could dictate form at the start of the season, and Kevin is leaving no stone unturned in his bid to start 2014 as best prepared as possible.

“McLaren has been part of my life since I was a small kid,” he says. “My dad, Jan, was a test driver here and did one grand prix with the team back in 1995, but I’ve always dreamt about driving for McLaren. It’ll be incredibly special to be in the car as a racing driver – with the Magnussen name on the side.

“Now that I’ve got the race seat, I’m fully focused on the work ahead of me. This winter will be all about preparing myself for the first test in January, and the first race in March. It’s about spending time with the engineers, driving the sim, and getting used to everything. It’s a lot of hard work – but I’m really enjoying it.”

Kevin is no stranger to application: a year ago, he set himself some steep goals in order to step up a gear to win the World Series. According to McLaren managing director Jonathan Neale, Kevin has benefited remarkably from his most recent single-seater season.

“During 2013, Kevin really knuckled down,” Jonathan explains. “He started to show all the attributes that, in due course, will make him a great driver. To win in the World Series, you have to be an all-rounder: you have to be able to work well with your engineers, understand the technology, and also be tenacious; be able to go through the inevitable upsets and come out on top.

“In the last few years, Kevin has shown that he has the raw pace and aggression; but, this year, he’s taken control of it – he now knows when to really push and when it’s better to just bring the car home. That discipline brought him a great championship victory.”

It won’t have escaped anyone’s attention that Kevin is following in the footsteps of McLaren’s last rookie driver, Lewis Hamilton, whose painstaking preparation enabled him to jump seamlessly into Formula 1 at the start of the 2007 season.

Kevin is undaunted by the comparison:

“The fact that Lewis did exactly what I’m doing now is a positive for me,” he admits. “It shows that the team has been there before, and has already prepared a rookie for his grand prix debut. The fact that Lewis was so successful doesn’t raise the pressure for me, it just shows that it can be done, and that you can be successful as a rookie. That’s really encouraging.”

The winter will be equally intense for everyone at McLaren – the far-reaching technical changes mean the sport is virtually re-inventing itself for 2014, so the search for performance – from both the chassis and the powertrain – is as deep as it is wide.

However, Kevin’s arrival will have a positive effect, according to Neale: “We’re very excited about having Kevin on the team. We now want him to come in and work really hard at the basics: he needs to understand that coming into F1 is just the start. He’s 21 – he’s got a lot to learn, we want to shelter him from the inevitable ups and downs of life in motorsport but still unleash the exciting potential that he’s got. You can identify that killer instinct in somebody – Kevin’s very hungry, but also very controlled.”

McLaren sporting director Sam Michael agrees: “Kevin’s arrival is really exciting for the whole team – he represents the future. When you have a rookie come onboard – somebody who’s full of energy, who’s just won his lower-category championship, and who is desperate to prove himself – it creates a buzz within the team; people share his hopes and dreams. From a team point of view, it’s a fantastic move.”

Despite the 2014 regulations’ complexity, Kevin feels the clean sweep ought to give him an easier ride than if he were jumping into Formula 1 during a period of established regulations: “It’ll be a new challenge for everyone, not just for me,” he says. “Everyone’s going to have to learn about the 2014 cars – not just myself.

“It’s a good year to come into F1. The fact that I won’t have as much experience as some of the other drivers actually counts a little bit less – of course, it’s still going to require a lot of hard work – and I’ll have a lot to learn – but so will everyone else, so that’s a positive for me.”

While the debate between youth and experience is always nuanced, McLaren sporting director Sam Michael argues that Kevin shouldn’t be negatively affected by the rule-changes.

He says: “Regarding youth versus experience, you could argue it both ways: in terms of learning how the tyres behave, the powertrain works, and the effect of the new aerodynamic maps, the experienced guy will have a more balanced understanding.

“But this is a brand new formula, so a rookie isn’t as disadvantaged. Even if it doesn’t necessarily give Kevin an advantage, the advantage of all the other drivers is diminished because everyone’s starting from the same benchmark. And it’s much better for Kevin to come in now than any other year.”

Kevin will be more than ably assisted by the most experienced team-mate in the sport, Jenson Button. It’s a partnership that fills Kevin with anticipation: “I’m sure working with Jenson will be beneficial,” he says. “He’s a world champion, he’s the most experienced driver in Formula 1 and I’ll be able to learn from him; I’ll be sat next to him in debriefs at every race next year, listening to what he says and watching him work with the team. He’ll be a great guy from whom to learn.” 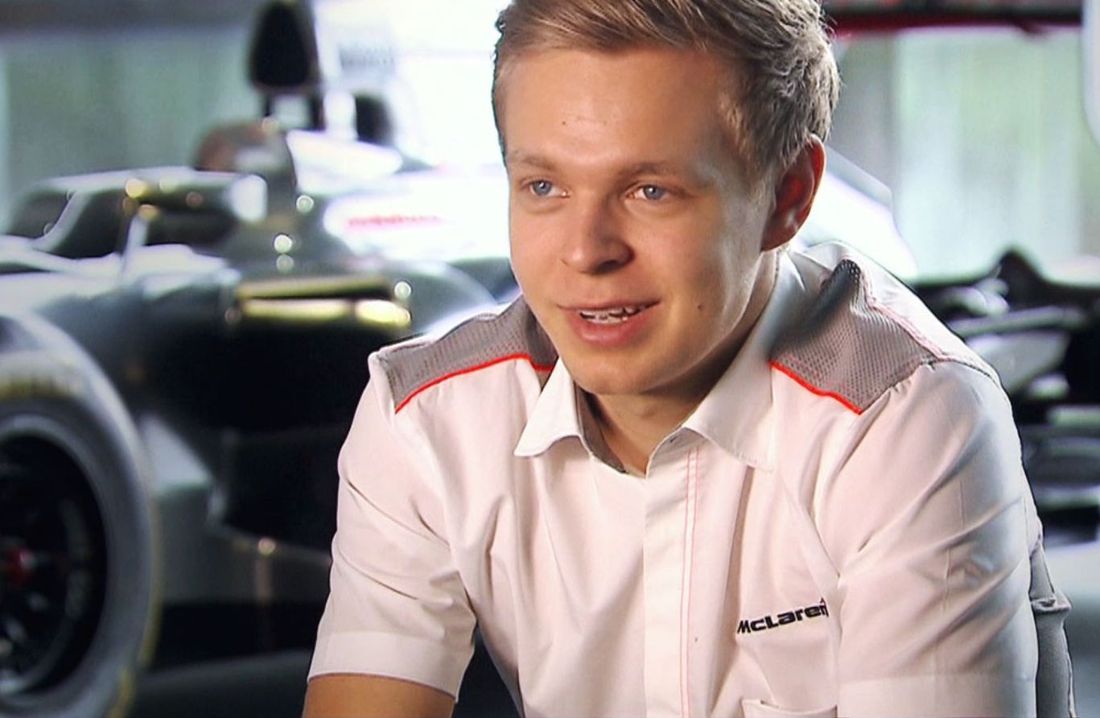 Kevin Magnussen – the rise to F1