In the second of our exclusive interviews with Mikey Collier, sports scientist and physiotherapist to Jenson Button, we quizzed Mikey on JB's training and dietary routine.

What are Jenson’s favourite ways to train?

MC: Triathlon is obviously his big interest and big hobby because it is a great cross-training tool to prepare for races in Formula 1. Clearly that involves cycling, swimming and running.

He would say that he enjoys cycling the most but that does change sometimes. The good thing is that we can do this kind of training at most races we go to. In addition, we also try each week to have a session where we work on flexibility, reactions, strength, endurance or power. I try and keep his training very varied, that’s why I think he enjoys it so much.

Do you draw up training plans for Jenson weeks in advance to work on specific areas?

MC: We look at the upcoming year and the way in which the Formula 1 calendar is spread out, and from that we identify the things to work on. In particular, we will look at gaps between race events that allow him to do some triathlon without a potential impact on his performance at the race. We make sure he has enough time to recover after a triathlon race just as we would do after a grand prix. Around those dates, his training can be based on where he is in the world, his travel arrangements, plans, and work commitments. It is not as consistent as perhaps he would like, but it’s a pretty good compromise.

How long on average would you say that Jenson trains a day?

MC: It’s difficult to say because you can have a week where we don’t do anything because of travel commitments and races. But a good month for him during the season would be about 45 hours of training. If you take into account travel, which takes up a significant part of his time, racing debriefs, time in the simulator, actual racing, it is a considerable amount of time, given all the other things he has to fit in.

Do you put any restrictions on what he can do in his spare time to prevent injuries?

MC: There are certain things he should avoid, for example high-risk sports. We don’t do any downhill mountain biking or any skiing which I know he would like to do. It’s simply because of the risk associated with them. Also some days when it rains, he knows that he will be less likely to go on the bike because there is a much higher chance he could have an accident. He pretty much dictates what he should and shouldn’t do, because he is a smart guy.

In terms of how fit he is, could you compare him to the average guy in the street?

MC: This question is often asked. I think it is very difficult to some extent because motor racing is a very unique sport. It requires incredible decision making, concentration, reaction time, strength, endurance, as well as incredible control and precision, so it’s a very difficult sport to compare against. He will be comparable to some professional cyclists or perhaps some premier league football players. However it is difficult to compare him to a particular sport in terms of overall fitness. He takes it incredibly seriously. In fact he excels at it. 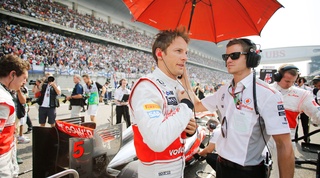 Do you control what Jenson eats?

MC: Probably control is the wrong word (laughs). I would say I am a facilitator. I help him make decisions over his weekend that means he doesn’t have to think about it. It’s based on a nutritional format that we follow. However, if I wasn’t there, he would probably eat the same type of food, simply because he knows what he should and shouldn’t eat. That’s why I facilitate that. I ensure that he eats the right type of thing but he would probably eat it anyway.

Does he have any guilty pleasures?

MC: He would be the first to admit that he likes a good sticky toffee pudding. But you can have those things knowing that you have perhaps trained well or had a good race. I would say there are pleasures that shouldn’t be taken away from someone’s diet but should be eaten in moderation.

Do you put these rewards into his diet plan?

MC: No, we work on what I would call a high-protein carbohydrate diet. There is plenty of protein in every meal that we have. Those carbohydrates tend to be things that come from trees or from the floor, like vegetables or fruits, so they are natural. They are high in vitamin content and untouched by mankind. They provide you with the best type of carbohydrate that you can have rather than say eating a chocolate bar.

Could you describe the typical meal that Jenson would have at a race weekend?

MC: A breakfast at a race weekend would be an omelette with mushrooms, peppers and perhaps a little bit of cheese and he also likes a bit of chilli with that. To go with that he would have a carrot juice, a cup of tea and bowl of yogurt with mixed nuts and berries. That is a fairly typical breakfast. Later that morning he will probably then have a snack, which could be dried fruit and nuts.

For lunch we would have a poached salmon with three or four types of vegetables. He would also have a protein shake around then too.

Then for dinner he would have some fish or steak again with three or four types of vegetables.  It tends to be quite consistent.  So often he eats fish, meat and vegetables because that is the best type of diet for him. 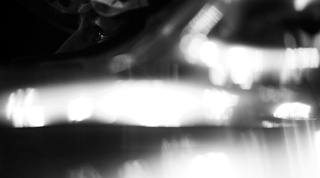 And generally, how is Jenson to work with?

MC: I have worked with Jenson for 6 years; I actually met him in 2001 when I was working at Benetton when he was there then. So our contact goes way back really, but he is a very honest, hardworking and caring driver. I think a lot of people see that in the interviews he gives. After working with him so closely for so long, I can certainly vouch for those characteristics.

Do you live every moment of the racing when Jenson is on the track?

MC: Funny you say that! My position at the events has now changed because of new restrictions. I used to do his pit board which gave me a real up-close-and-personal feel for how the driver was doing and because you were watching the stats, times and information, you became very involved in the race. Unfortunately, this year that has all changed, but it doesn’t mean I am any less interested or involved.

The story of the marque