Who could have known that, when we took our first, stumbling, confused steps on Twitter (way back in March 2009, fact fans!), we’d be walking into the great big world of social media?

We certainly couldn't have predicted how many McLaren fans would enjoy a look behind-the-scenes at McLaren, shared through Facebook, Twitter, Instagram, et al. That's why we tend not to look back that often at some of our earlier work! But as we’ve progressed, we’ve certainly found our voice in the social media world.

And while there hasn’t been too much to shout about during a rather difficult year on-track, there’s been plenty to enjoy on our social media channels this season. In fact, you guys have been as awesome as ever in interacting with the team.

Come to think of it, there have been lots of moments of social gold over the last six years. We take a look at our top 11… 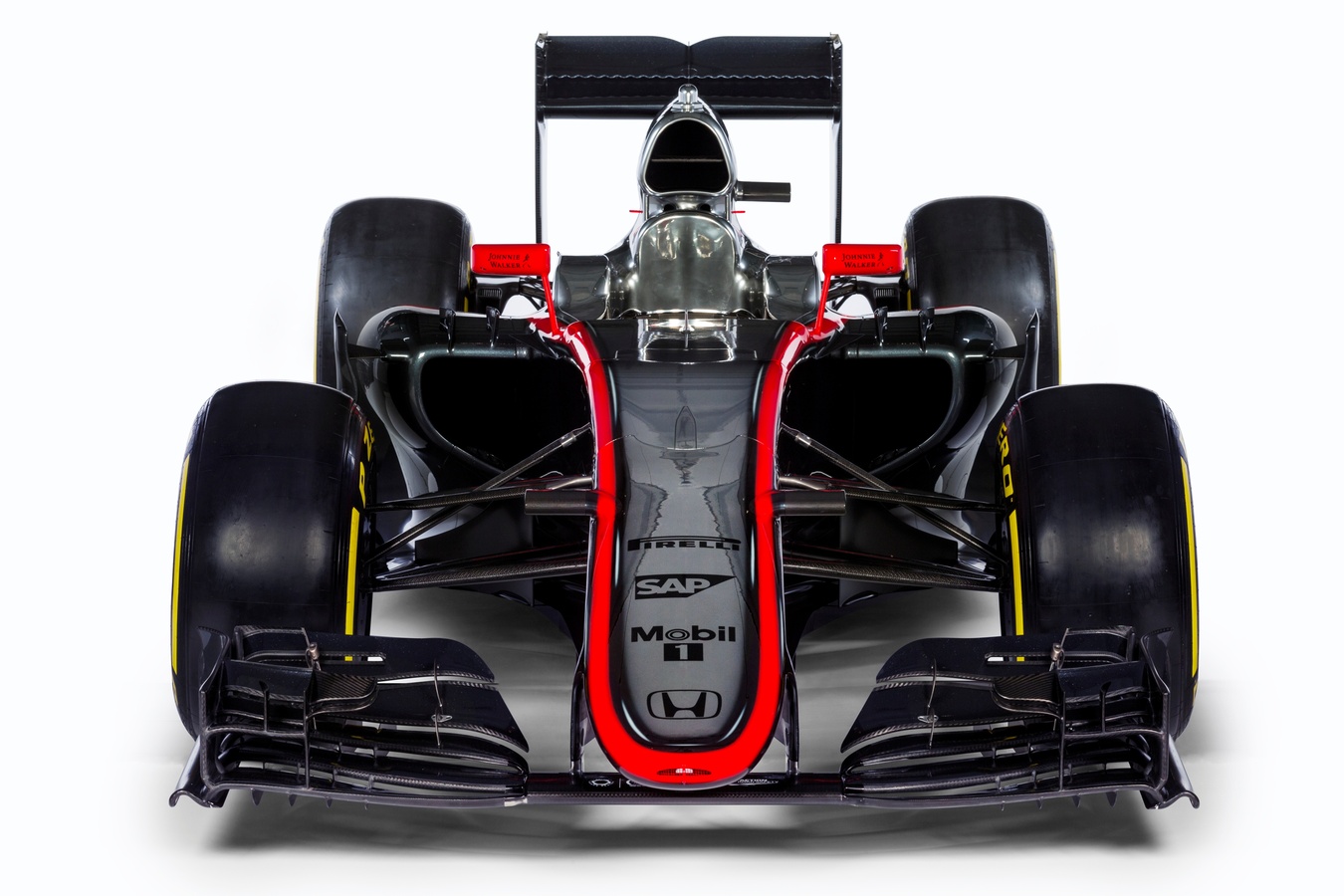 #MakeHistory we said proudly. It was hard not to be swept up in the excitement of a McLaren-Honda reunion, and your breathless enthusiasm for everything we shared at the beginning of our campaign suggested that you felt very much the same way, as you interated and shared no less than 11 individual videos, and more.

It must be somewhat embarrassing when your gaffes are played out in front of a global audience. It’s understandable that Lewis was still sub-consciously looking out for his old crew as he pitted at Malaysia in 2013 – he’d driven 110 races for McLaren, and only two for Mercedes at that time – but we also like to think that we were perfectly gracious in welcoming him, too!

What is it they say? When you really want something, go out and take it!? Our two world champions, Fernando and Jenson, did just that – stopping off en route from parc ferme to the paddock to pose for this opportunistic shot. I think we all share the belief that they’ll be back up there soon – and for all the right reasons, too. 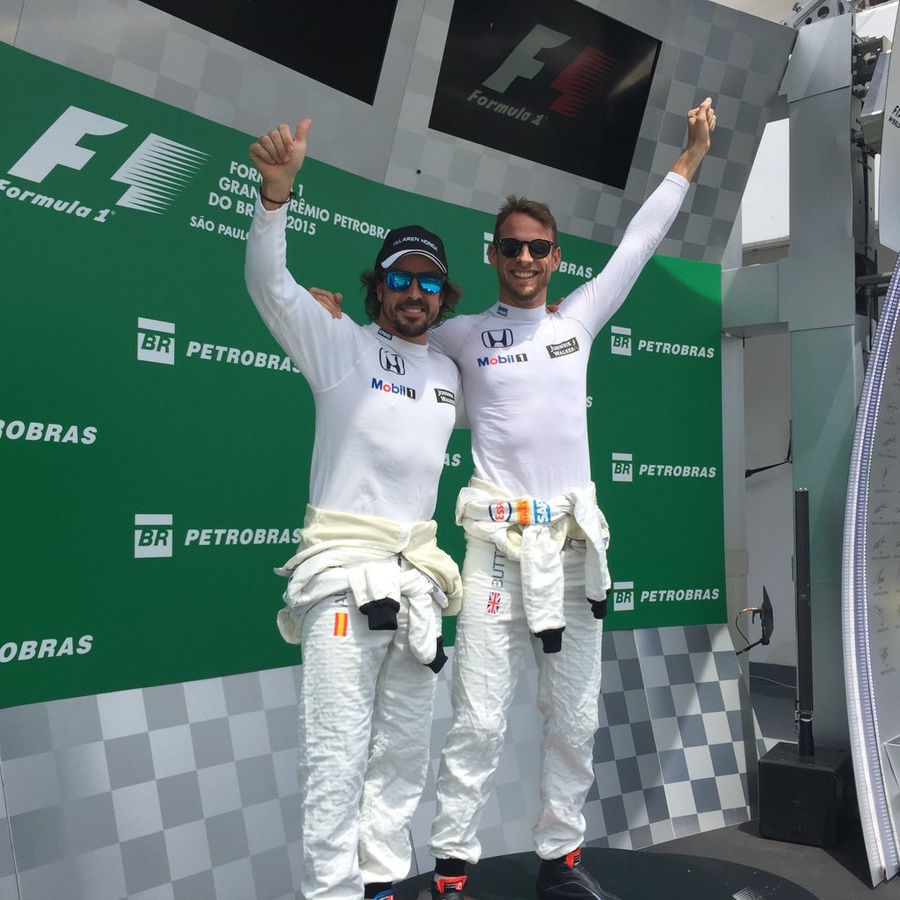 A moment of nonsense, of course, but also a reminder that, when you’re in Japan, everything just seems a little bit stranger than normal. And that’s just the way we like it. 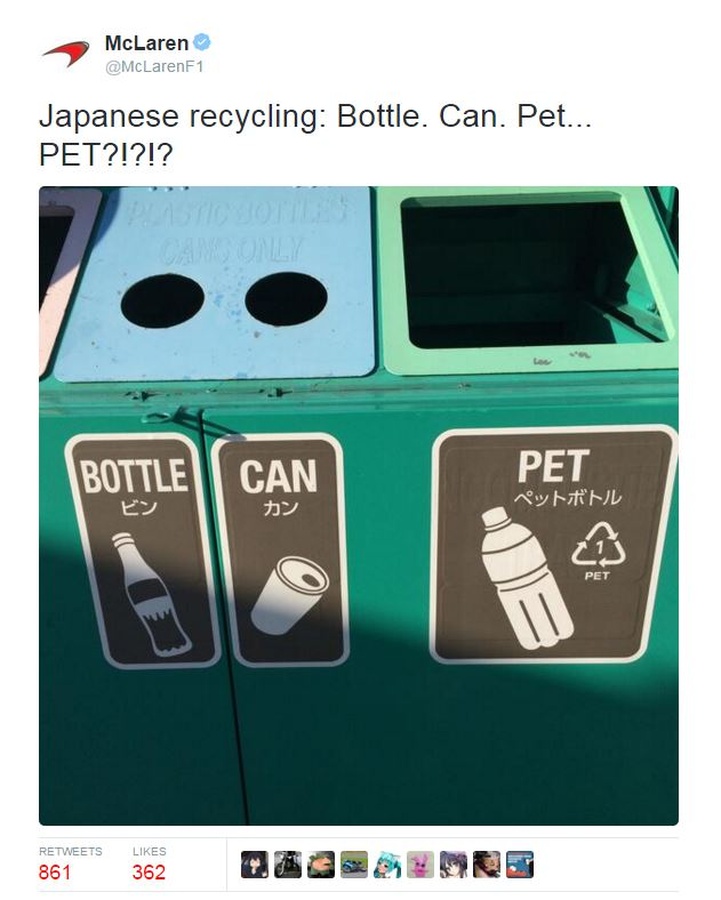 We still get a bit emotional about it, and our mesmerising video certainly pulled on the ol’ heart strings. That said, how do you do justice to probably Formula 1’s most enduring icon? A lot of hard work went into the #RememberSenna campaign, and we’re still justifiably proud of how well received it was. 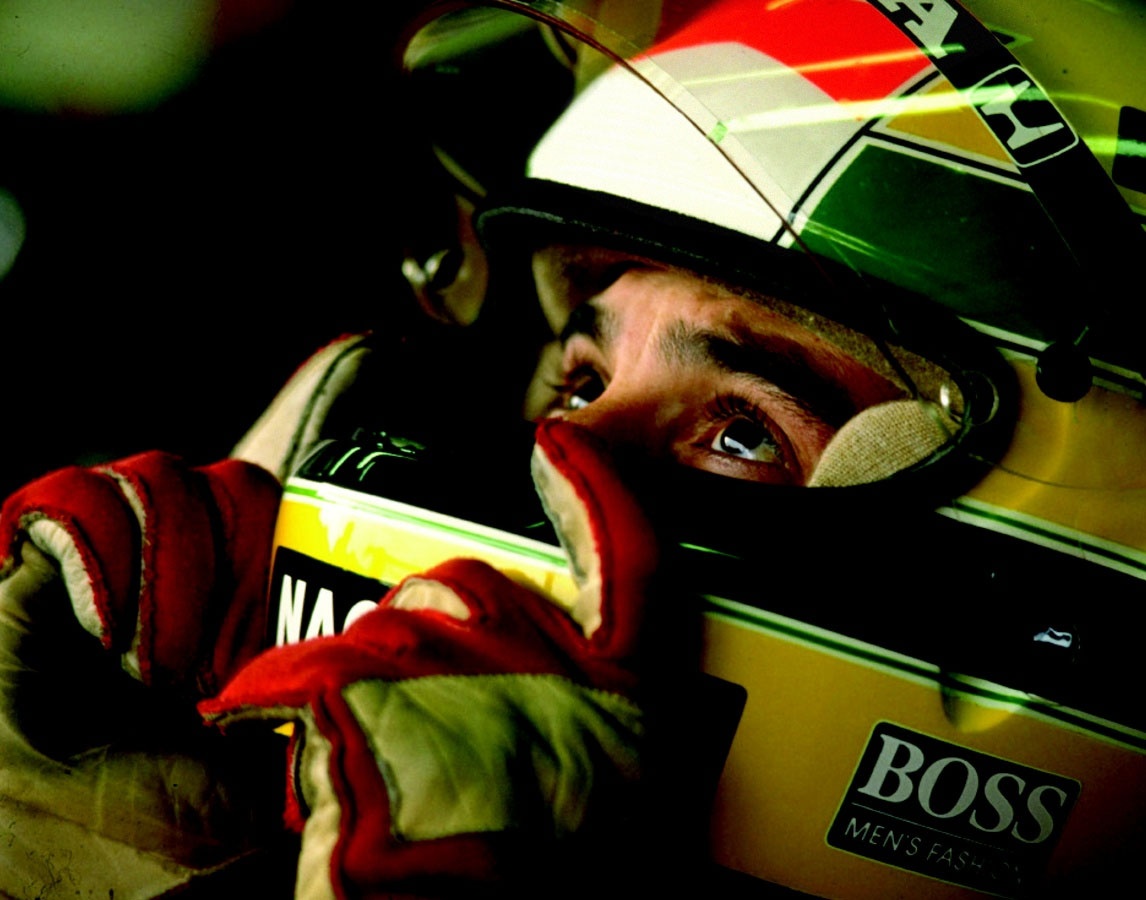 Our first piece of on-car branded content. When the #GetIn hashtag appeared on the MP4-29’s sidepods at the 2014 Japanese Grand Prix it was to help raise awareness for our competition that allowed two lucky fans to win a VIP trip to MTC. Nice video too... thanks JB! 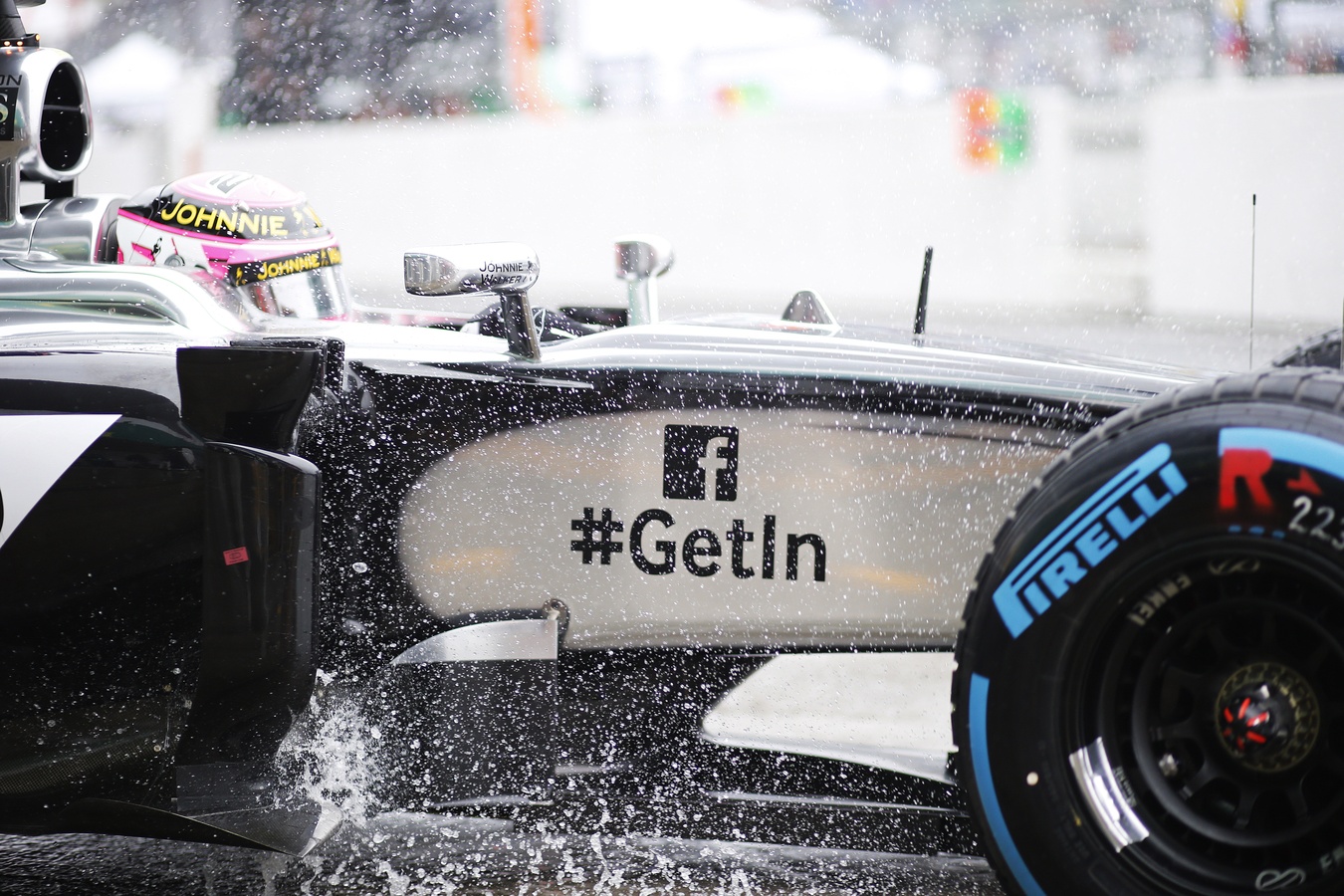 A simple piece of online fun, enabling participants to whiz through an online multiple-choice questionnaire that would help them choose which McLaren driver best suited their personality. Our fans were certainly keen to share their results on social media, too. Hands up who didn’t rig their answers so they ended up being James Hunt? Guilty!

It was the ‘will he/won’t he’ potboiler that kept everyone on the edge of their seats. Despite firmly assuring everyone that our 2015 driver line-up would be confirmed before the end of last season, we managed to flunk that deadline, finally delivering on our promise in mid-December. A nice Christmas present… for someone. 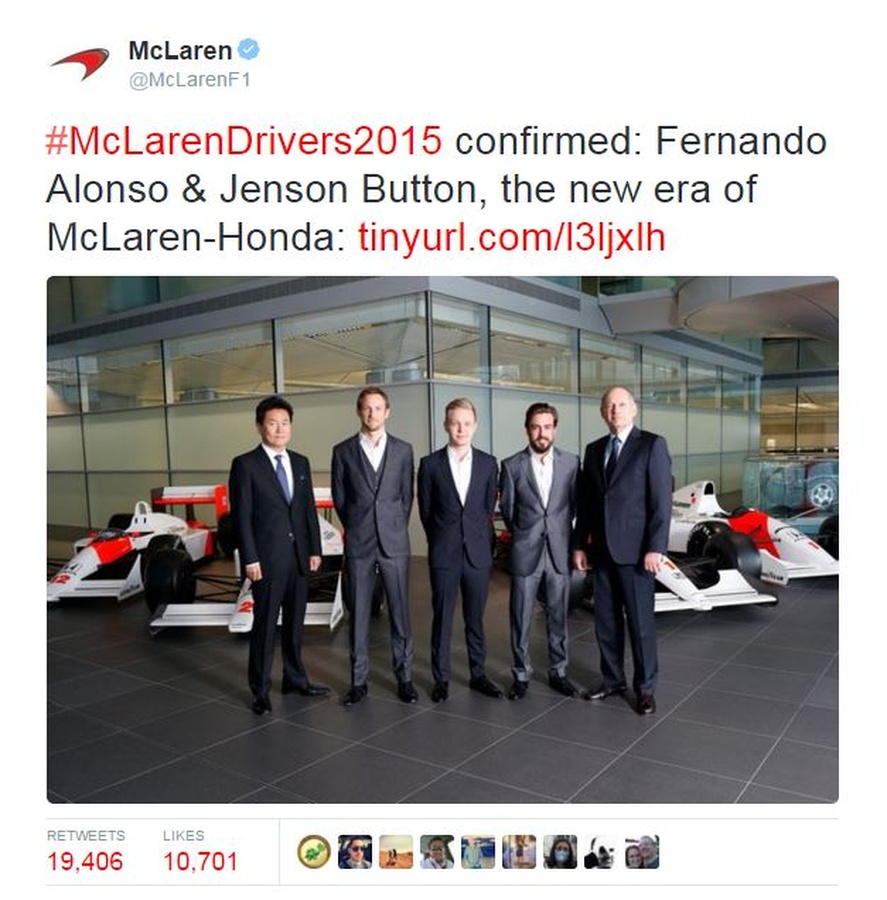 From small acorns, eh? When @TheFifthDriver (as was) stumbled from the plane and started to randomly talk about his voyage around Melbourne, we knew we were onto a winner. Well, we didn’t, but it seems that you guys enjoyed it, and we just decided to stick along for the ride…

It seemed like a big, scary thing at the time – but retiring our eponymous Twitter handle, @TheFifthDriver, was the right thing to do. As McLaren’s social output continued to grow, it was only appropriate that we stepped under the umbrella of the main team name. Mind you, we still like to think that TFD will one day return, and – secretly – we all got a kick out of being asked at races, ‘Are YOU @TheFifthDriver?!?’

‘No,’ we’d reply, blushingly, ’cos we actually were. Kind of. 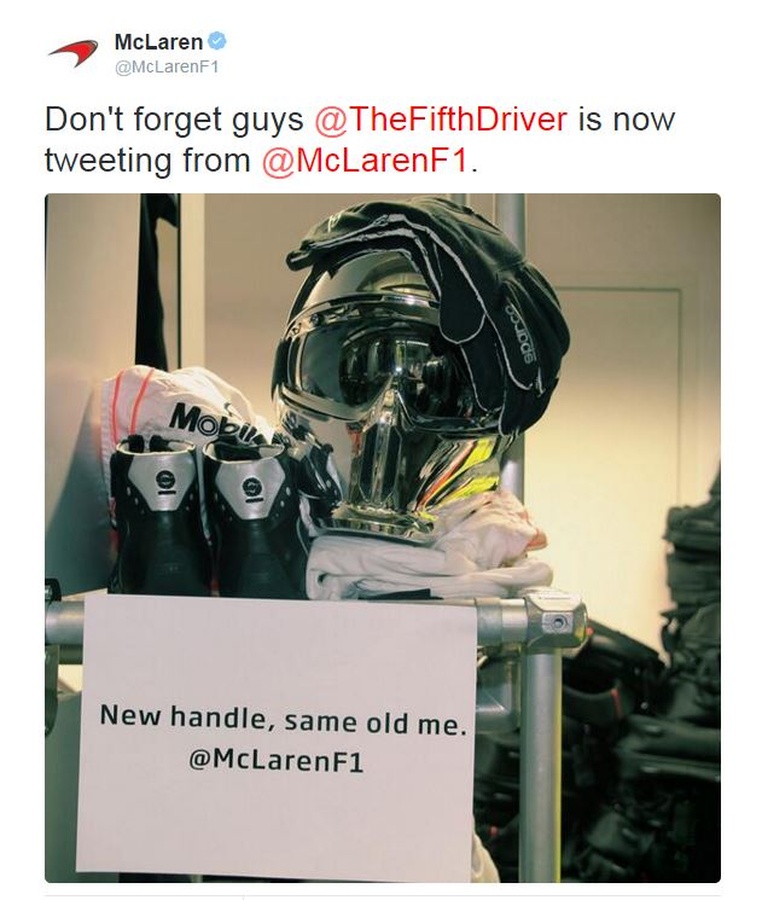