The heritage of Bruce McLaren

Were he still with us, our founder Bruce McLaren would be celebrating his 75th birthday today (August 30).

Bruce was far too forward-thinking and modest a man to worry about the past, or himself, yet the thought of a contented, septuagenarian Bruce cracking open a tinny upon hitting the three-quarters-of-a-century mark can’t help but bring a smile to our face.

It might seem strange for an organisation as progressive as a Formula 1 team to be so in thrall to the past. But history surrounds us and, rightfully, it never leaves us: for there are echoes of Bruce throughout everything we do.

Equally, our trophy cabinet may now run to an impressive 174m – and features silverware collected from decades of competition – but one small trophy sits modestly at the very centre of the whole collection.

It’s the Coupe de SM Leopold III – the Belgian Grand Prix winner’s trophy that was first awarded in 1933 (to Tazio Nuvolari, no less) and was retired in 1990 after being won for a third successive time by Ayrton Senna.

The cup was famously held aloft by Bruce, too; he triumphed on the old Spa-Francorchamps track on June 9 1968 to record McLaren’s first-ever grand prix win – the first of many.

There’s a neat circularity to the Formula 1 circus regrouping at Spa this weekend for the second half of this gripping grand prix season. Call it coincidence, call it fate, but there’ll always be a piece of Bruce with us, and we’ll be remembering him in Spa this weekend.

Bruce, Emmo, Wattie, Alain and Ayrton all took the Coupe de Leopold III for McLaren, but here’s a list of the winners in full: 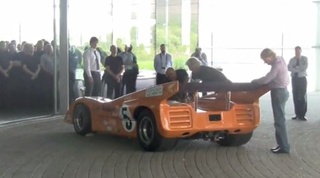