Equipped with a chassis and a dream, the brand-new McLaren team had to make its way to Monte Carlo for the start of practice for the Monaco Grand Prix.

The team had no transporter or van. Instead, the precious new M2B chassis was loaded onto a trailer, which was attached to the back of an American Ford Fairlane station wagon – the tow car a legacy of Bruce’s Le Mans sportscar contract.

Chief designer Robin Herd joined mechanics John Muller and Howden Ganley for the trip. They drove from its new workshop in Colnbrook to Lydd, from where they took a Silver City Airways Bristol Freighter to Le Touquet, prior to the long drive south. Bruce, timekeeper Patty McLaren and team manager Teddy Mayer would fly down later.

It was a long trip, and the weight of the M2B, its Ford engine and all the tools meant that the nose of the Fairlane was pointing upwards, sending its headlight beams into the eyes of approaching French motorists!

"There were no motorways then,” Ganley recalls. “The trip down to Monaco took ages.”

“It took two days to get down there,” says Herd. “We parked in Casino Square. And I remember someone looking at the car and saying, ‘It must be a Chequered Flag Formula Junior car’ – their cars were also white with a dark stripe. The whole thing was quite funny, an entire F1 team was stuck on the back of a trailer.”

The livery was a concession to Hollywood film director John Frankenheimer, who was busy filming Grand Prix, and had more or less taken over Monaco for the weekend. He needed a white car to fit his storyline, and McLaren was chosen to represent the fictional Japanese Yamura team.

Overhead of the on-track action 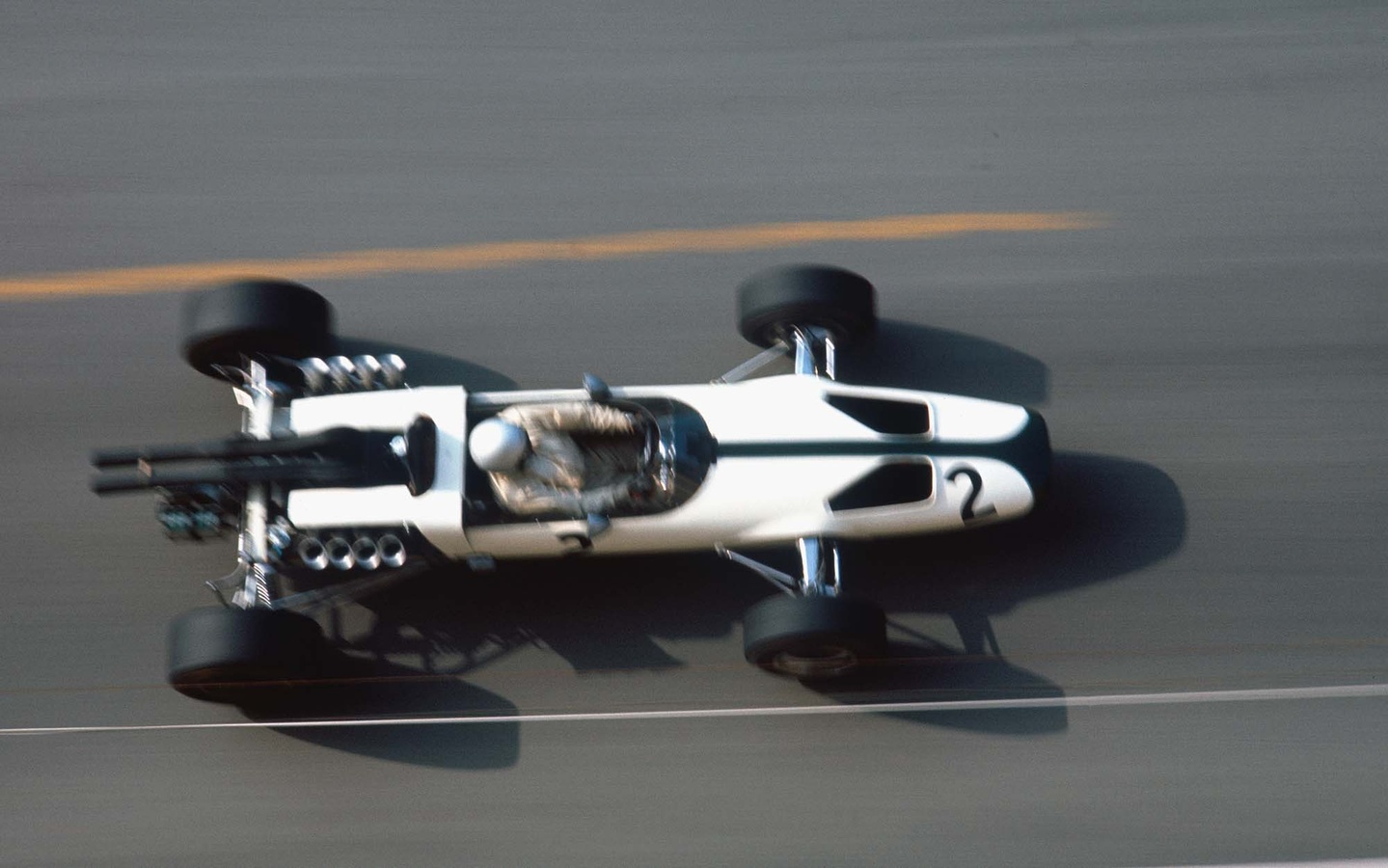 Overhead of the on-track action

For a suitable cash injection the planned green and silver colour-scheme – designed to reflect the team's New Zealand roots by famed motor racing artist Michael Turner – had been quietly abandoned.

Passers-by may have failed to recognise the McLaren as a new F1 car, but it soon attracted attention from the assembled media. Veteran journalists were quick to recognise the high standard of workmanship that had gone into it.

Among them was Motor Sport's Denis Jenkinson, who wrote: “The detail work and the finish of the McLaren is of a very high standard and a great deal of thought has gone into final details, making the car appear to have a 'tool-room' finish, rather than having been hurriedly assembled in the back garden, like some racing cars.”

Jenks thought that the package had potential: “The engine carries a bit of a weight handicap, and the car appeared big for street racing, but undoubtedly has a good development life ahead of it and should be at home on the faster Grand Prix circuits.”

Autosport editor Gregor Grant referred to the “very handsome and superbly engineered McLaren,” while the magazine's technical editor John Bolster was also clearly impressed. “Great excitement was caused by the appearance of Bruce McLaren's new car,” he wrote. “This beautifully made machine has a monocoque chassis as would be expected, but the front suspension is a little unusual.

The mechanics work on the M2B 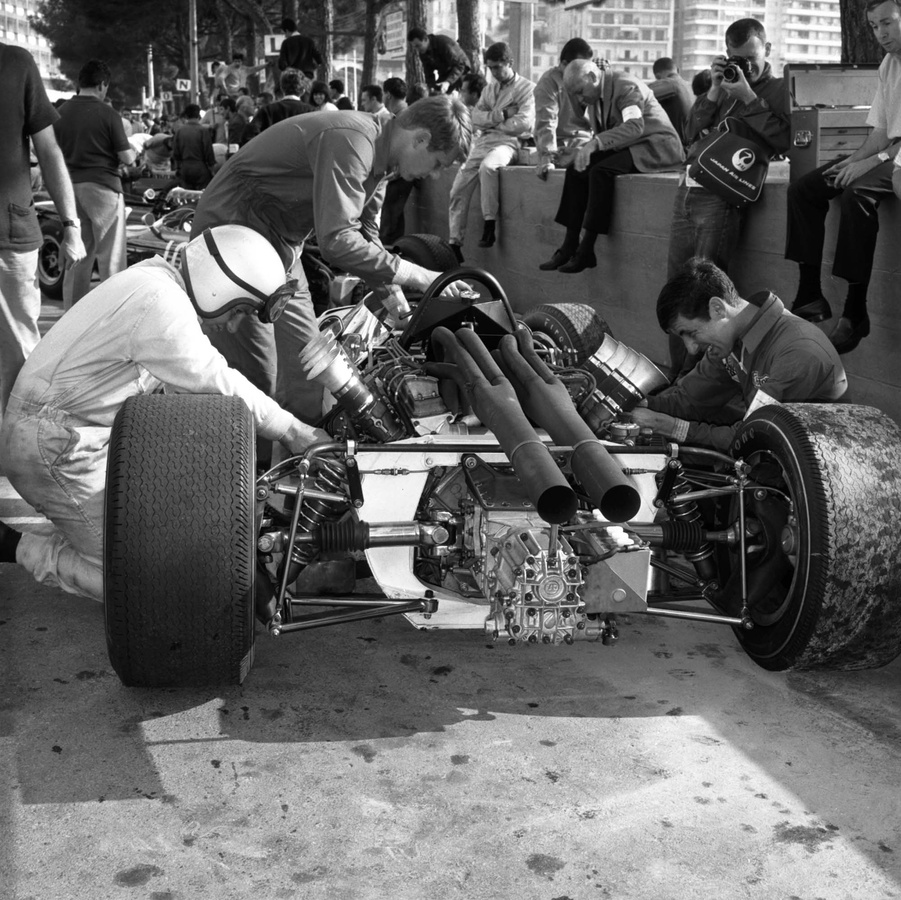 The mechanics work on the M2B

“The V8 engine has the most enormous air intakes, with butterflies situated between the cam covers, and the exhaust system situated in the middle of the Vee is also of heroic proportions. Quite how the gas velocity is kept up to an acceptable figure for acceleration is not clear, but the plumbing looks immense compared with that of Jack Brabham's Repco engine. The noise practically shatters the eardrums!”

The car's presentation was due in large part to hard working Kiwi mechanic and noted perfectionist John Muller.

“Up until his arrival, racing cars were filthy, like traction engines,” says Herd. “Always greasy, oily, and grubby. He revolutionised the presentation of racing cars. Suddenly, here was a car that was always immaculate.”

The McLaren was the first car out on track in a damp practice session on Thursday. It performed respectably, but was perhaps flattered because everyone else was struggling with their new chassis and engines.

“When the track dried my car felt pretty much like last year,” Bruce wrote in his Autosport column. “Through the climbing right at Ste Devote and through the chicane you could feel you had a heavier car. It isn't so long ago with the smaller cars that you could sort of 'straight line' the chicane without much bother, but now with the wider track, longer wheelbase, and bigger tyres you just had to make two corners of it, first left and then right.”

Clear blue skies while Bruce is on track 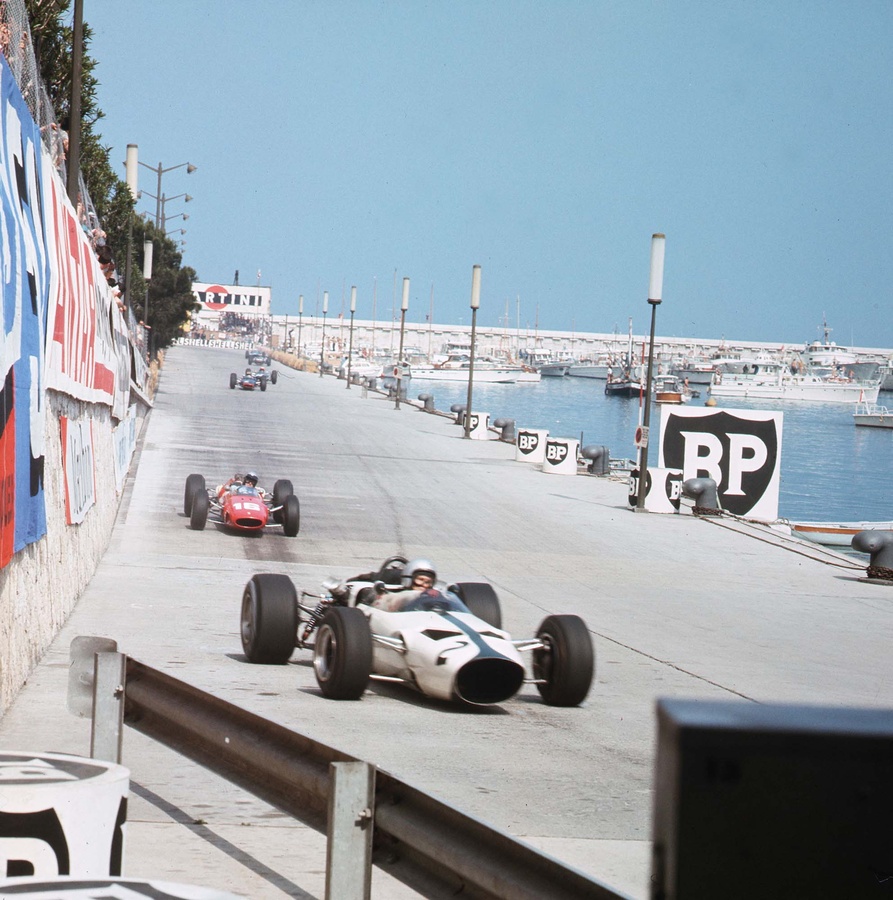 Clear blue skies while Bruce is on track

The lack of power from the Ford and its narrow rev range left the team with some work to do on gear ratios. Called in to help out was mechanic/engineer Tyler Alexander, who was a late arrival in Monaco having come over from an American sportscar race.

“When I showed up, Bruce said we needed to change gear ratios,” Tyler would recall. “It was a ZF-type gearbox. I'd never seen one before and he said, 'Here's the manual, fix it!'. The noise the car made around Monaco was incredible. It didn't go worth a damn, but the sound was unbelievably impressive.”

Bruce didn’t help himself in final qualifying on Saturday by leaving his racing boots in the hotel.

“We had a slight failure in the footwear department in Saturday's practice and my racing boots were left back at the hotel,” he wrote. “Hush Puppies don't seem to have been developed with F1 racing in mind, and I was having minor dramas getting the toes jammed up between the pedals and the front oil tank. It didn't take long to hack-saw the toes off, and with a very smart look for the '66 summer season, I was back in the fray. My wife wasn't very impressed at all!”

McLaren was nearly 3secs off Jim Clark’s pole, but six of the 16 entrants were behind him on the grid. They included his old pal Jack Brabham in his new Repco-engined car, although they had actually set identical times.

“Bruce qualified 10th,” recalls Herd. “The car was so heavy, he couldn’t help but have phenomenal traction!”

“I think it went reasonably well in practice,” says Ganley. “It had a Hilborn injection system, which was only a slight refinement on a fire hydrant! It was a beast. Tenth wasn't bad for a new car.”

The start and the first lap were captured in superb style by Frankenheimer’s cameras, and thus Grand Prix shows Bruce shooting up to sixth place. However, the fun didn’t last. He soon dropped to seventh and then after just 10 laps an oil leak, caused when a line came adrift, sent him into the pits.

“An oil pipe union came loose up front in my car and squirted half the oil on the road and the other half over me in the cockpit,” Bruce wrote. “Oil is uncomfortable enough on the road, but I can assure you it's even worse in the cockpit – after it had been through the engine it was a little on the warm side too!”

“The oil went onto Bruce’s shoes,” says Ganley, “And he had a big moment when his foot slipped off the pedal. We got it hooked up again, but he was a long way behind. Bruce was worried about blowing the engine up, so he didn’t go out again.” 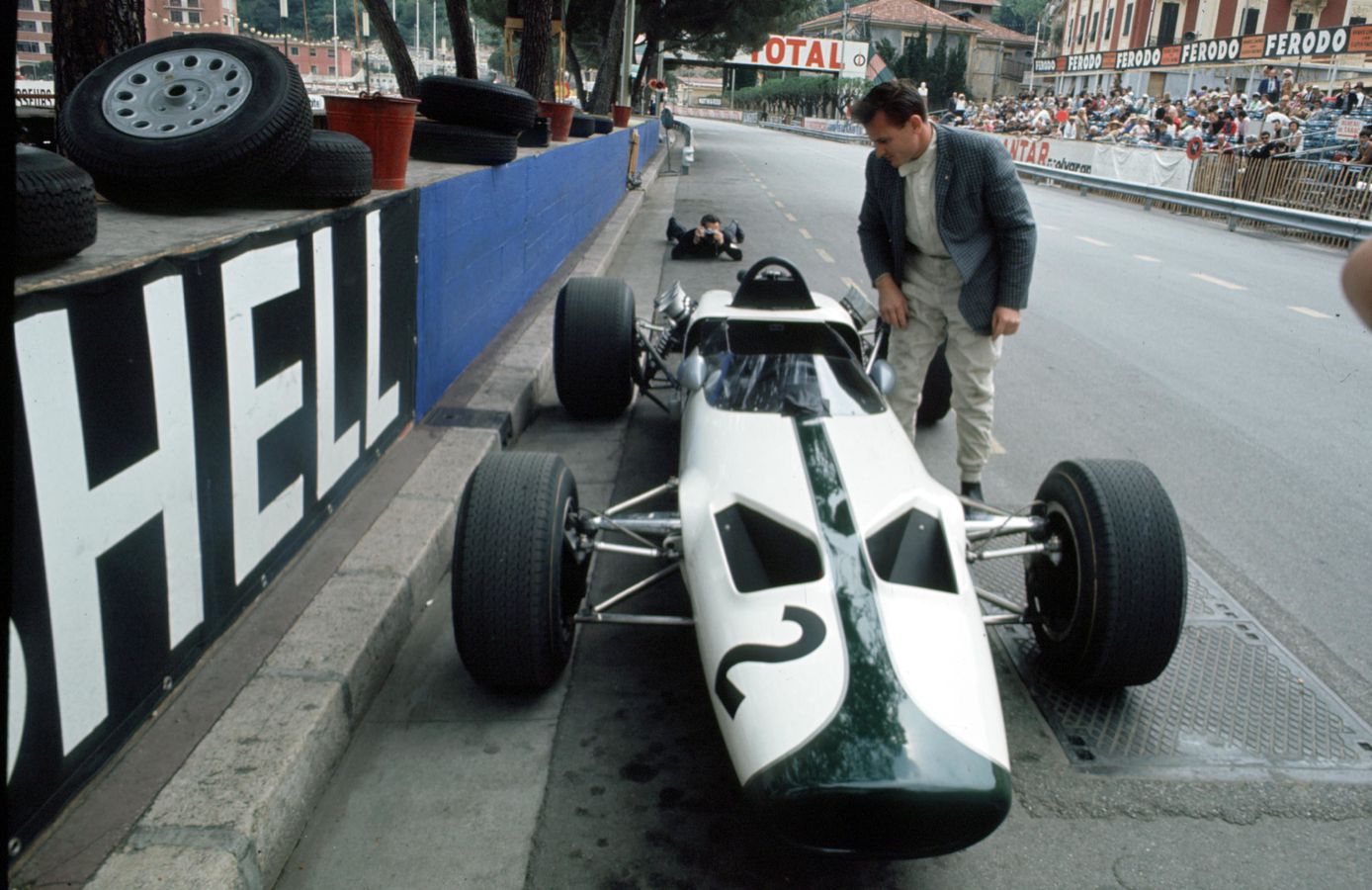 The rules didn't allow the oil to be topped up, and thus Bruce decided not to continue. It proved to be a race of high attrition, and given that the eventual fourth place finisher was also last and five laps down, good points could have been earned. It was assumed that the oil union had come loose in part because of the different expansion rates of the aluminium/steel connection. Ironically the last man to work on the hoses before the race, and attempt to squeeze them into a tight space at the front of the car without them being under tension, was Bruce himself.

The following day, there was a debrief on the terrace of Bruce's hotel, where all the team members were invited to say their piece, and suggest ways forward.

“We were all given our opportunity to speak,” says Ganley. “And each suggestion was given due consideration. Even if one's own ideas were not adopted, you knew that your voice was heard, and you were not 'just' another employee. As a way of building a team it was superb, and a lesson I took onboard in my own race car business [Tiga] in later years.”

The consensus was that the Ford V8 wasn't up to the job, and a replacement had to be found. The team tried an Italian Serenissima V8 for a few races, but that was hardly any better, so later the Ford was given a second chance, and Bruce managed to finish fifth at Watkins Glen.

More on our humble beginnings 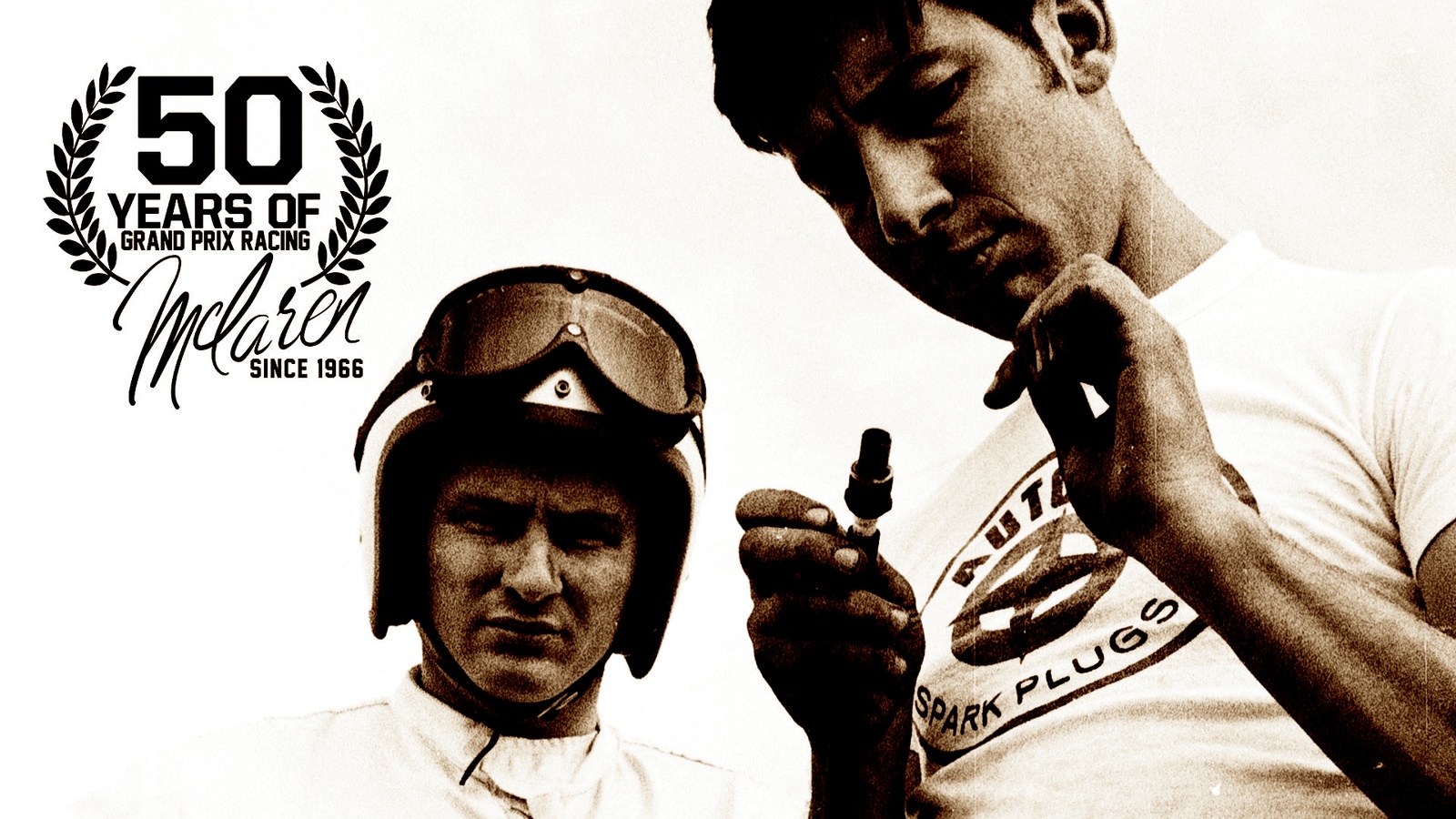 More on our humble beginnings

Chris Amon never did get to race a second M2B, and it proved to be a wasted year for the youngster, who kept himself busy by driving camera cars for Frankenheimer. There was one highlight – a month after Monaco he and Bruce shared a famous victory at Le Mans for Ford.

The Detroit giant never did provide the backing for the F1 project that McLaren and Mayer had hoped for. However, a year later Colin Chapman was able to extract some funding from Ford Europe for what would become the Cosworth DFV, an engine that would subsequently play a large part in Team McLaren's history.

“The 1966 season was a funny one, very much a transition year for everybody,” says Amon. “I’ve no doubt that if we’d had a competitive engine we would have had a competitive F1 team. I think everything was there, bar the engine...”