One evening, I received a phonecall from Eoin Young. He chatted for a while then said, “Bruce is here and he wants to talk to you”. Bruce came on the line to tell me that he was going to expand his team, which was called Bruce McLaren Motor Racing Ltd (leaving no doubt as to the company business and who was the boss), and would I like a job?

He asked me about my mechanical knowledge, and seemed happy with the answers. We agreed that I would start work the following Monday morning and I was to present myself at ‘the office’, in fact a house in New Malden inhabited by Eoin, together with mechanic Wal Willmott and Tyler Alexander. The workshop was also in New Malden, and after a conference at the house I was taken round to see where we were going to work.

I had seen some fairly basic racing workshops since arriving in England, but this had to be about the most basic of them all. It was a fairly large concrete prefab building, full of contractors’ earthmoving equipment, apart from the far corner where there was a small ‘clearing’ reached by wending one’s way in and out of the machinery. This space was approximately 30 by 20 feet, with a floor mainly consisting of dirt. Originally there had been a concrete floor, but it had almost completely disintegrated under the weight of the bulldozers.

Against one wall there was a workbench, approximately eight feet long. Equipment consisted of a small drill press, a bench vice, and a set of oxyacetylene welding bottles with in-line gas fluxer. There were no chassis stands, but there was a large wooden crate that served the same purpose. The building, in Wellington Crescent, is still standing, and now serves as a builder’s merchant premises. 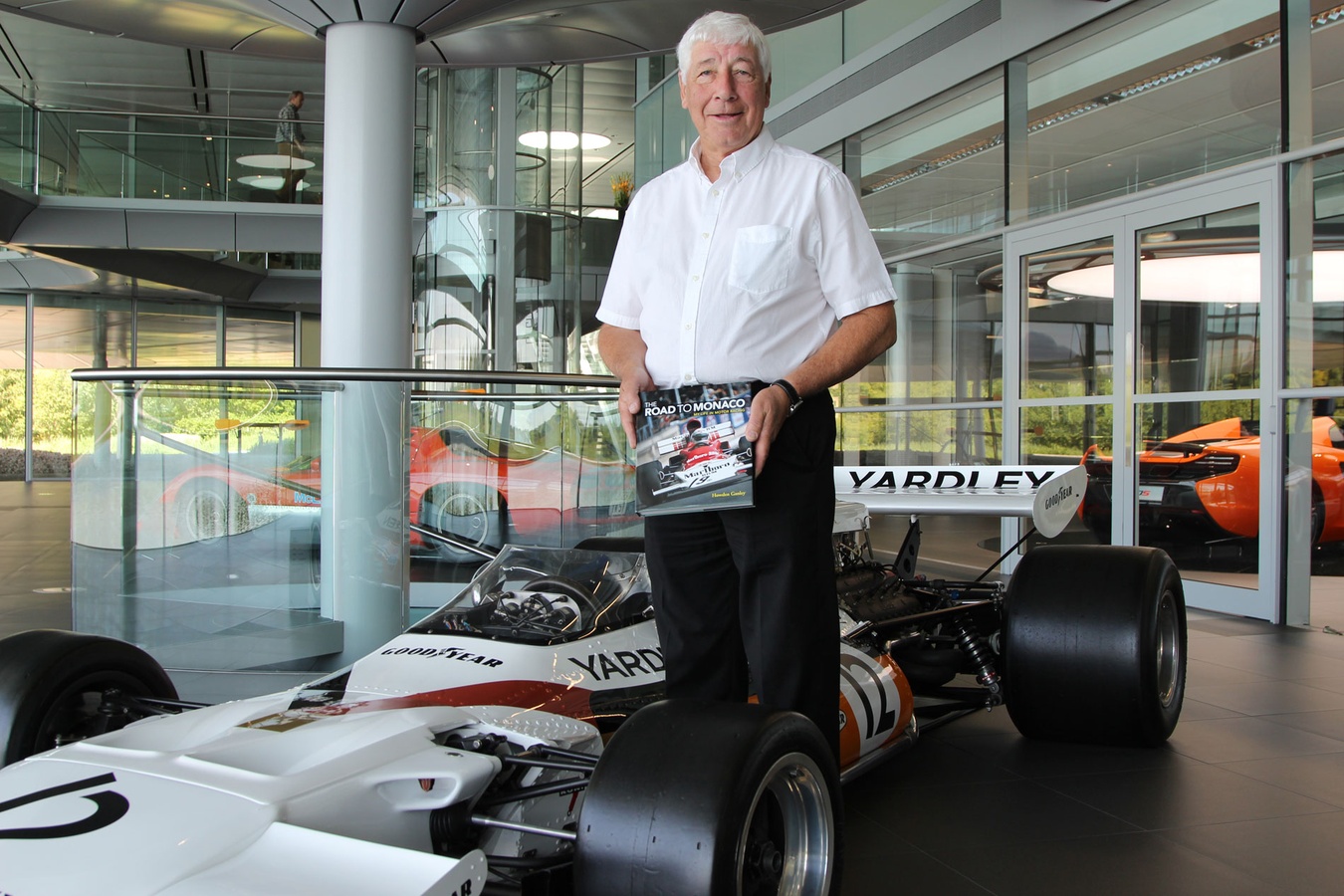 Team personnel were Bruce and his wife Patty as owner/directors, with Eoin Young as general manager. Wal Willmott and Tyler Alexander were the mechanics, and I became the next employee, as mechanic no.3, based on my conversations with Bruce. Wal and Tyler soon straightened me out on that one. They informed me in no uncertain terms that I was a ‘gopher’, not a mechanic, until such time as they found out if I really could thread a nut onto the end of a bolt without cross-threading it. I was unhappy at this setback, but as Bruce was away I was unable to lodge an appeal with him.

My first job was to clean up ‘the workshop’ then go with Wal to purchase a used Mini van, which I would be needing for carrying out my gopher duties. That same van served for many years, and featured in the famous wing-test programme for the Can-Am cars when it was driven up and down the motorway with wing and download measuring device attached. It also served as my personal transport, which was part of the remuneration package Bruce had offered me.

The next job was for me to go to the Cooper factory and obtain some lengths of tube, use Cooper’s tube-bender to shape them, and bring them back to New Malden where they would be made into chassis stands, as the wooden crate was to be retired. I was assured that Bruce had set it up with John Cooper, but I was nervous as I approached him, metaphorically tugging my forelock and saying something like, “Gidday Mr Cooper, I work for Bruce and he’s sent me to get some tubes bent.” “That’s OK boy, just see Roy”, and with that I was delivered into the tender care of Roy Golding, who directed me to the tube rack, then set up the bender.

Having completed my task, I loaded my newly bent tubes into the Mini and headed back to the McLaren workshop. I arrived to find that Wal and Tyler had left, so I decided that I might as well just get on and finish off the stands, so I cut, filed, fitted and welded them together. I worked fairly late, then headed home. Next morning I arrived bright and early, followed shortly thereafter by Bruce, Wal, and Tyler, who immediately spotted the new stands and following their examination the question to me was, “Who did you get to weld them together?”

I casually replied that I had done the welding, and for a while there seemed to be some disbelief. I was then quizzed again. “You mean you can do nickel bronze welding like that?” Once I had convinced them that it was all my own work, the next remark was, “You never told us you could weld like that!” After I had responded with “You never asked me!”, I was told that I was no longer ‘the gopher’ but was now ‘the fabricator’. Instant promotion!