How McLaren stole my only GP 'win’

In the below extract, McLaren's third-ever employee Howden Ganley tells the tale of the Grand Prix win that got away. Taken from his autobiography ‘The Road to Monaco’.

Neither I nor my team-mate Tim Schenken could get the cars working well at Mosport. No matter how much wing we took off, we could not get much speed up the long straight and things were a bit dismal until on race day we had some luck. Or at least I did.

Tim reckoned that it might rain, so we prepared ourselves some bubble visors just in case. Then as all the drivers were being driven around the circuit in open sports cars there came the most incredible rainstorm. Everyone and everything got drenched. There was a great scramble to adjust cars to wet settings, softer springs and dampers, disconnected anti-roll bars, and more wing, particularly as it looked as though the rain had set in for the day, just as it had in 1971. However, I recalled that in 1967 Bruce McLaren had looked as though he could win the race in the new McLaren M5, and on that occasion the heavy rain had stopped and the circuit dried, to Bruce’s disadvantage. I reckoned it was worth gambling that this would happen again, so I left the dry settings on the car. 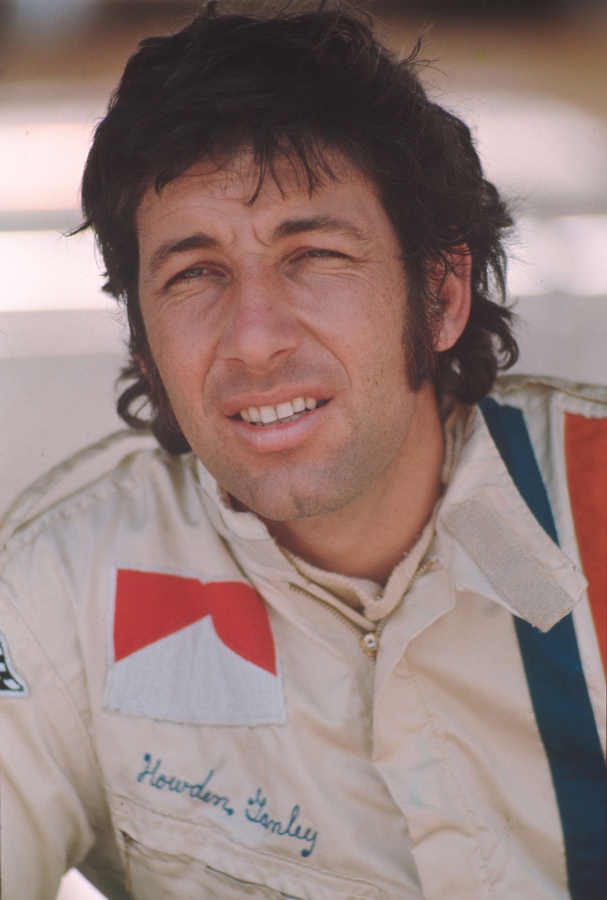 The good news was that the ambient temperature had dropped dramatically, so there was a chance that the engine temperatures would run in the normal range. The start went well, and I was able to make up a lot of places over the early laps, mainly by driving way off line, and with the engine running much cooler we were almost competitive on the uphill straight, probably helped by other people having cranked some extra rear wing into their set-up.

It was soon starting to dry out, and with the wet tyres you needed to be searching out the wet patches to keep them cool. The pit lane at Mosport was small and narrow, and the pits themselves were so short that if all the cars were parked there it was seriously overcrowded. I reckoned that there was no way I was going to stop until Tim had made his stop, so our guys could have a practice run at doing a quick wheel change – not something normally practiced back in those days. As I drove past each lap I could see frantic activity in the pits, in fact it looked like a complete shambles so I was even more certain that I should wait until pit road was almost deserted. I might lose out a bit by not being on slicks, but I was banking on a quick entry and exit from pit lane to make up some time.

At last I could see that there was very little activity, I got a signal that Tim had made his tyre stop, so in I came. For the last half-lap it felt as though I was on oil, so the wet tyres were not going to last much longer. We made a quick stop, and just as I went to leave I heard the familiar sound of a BRM engine firing up, which I now think must have been Jean-Pierre Beltoise, and that is significant in terms of the lap chart.

As I exited the pit lane I came across the Francois Cevert/Jody Scheckter accident, but it was to one side so was not an immediate problem. A lap or so later I came across the Porsche pace car, crewed by Peter Macintosh (former RAF pilot and team manager of the Red Arrows), and as I attempted to get past, Peter waved me back. We then exchanged waves for some time, but he made it clear to me that as far as he was concerned I was the race leader. 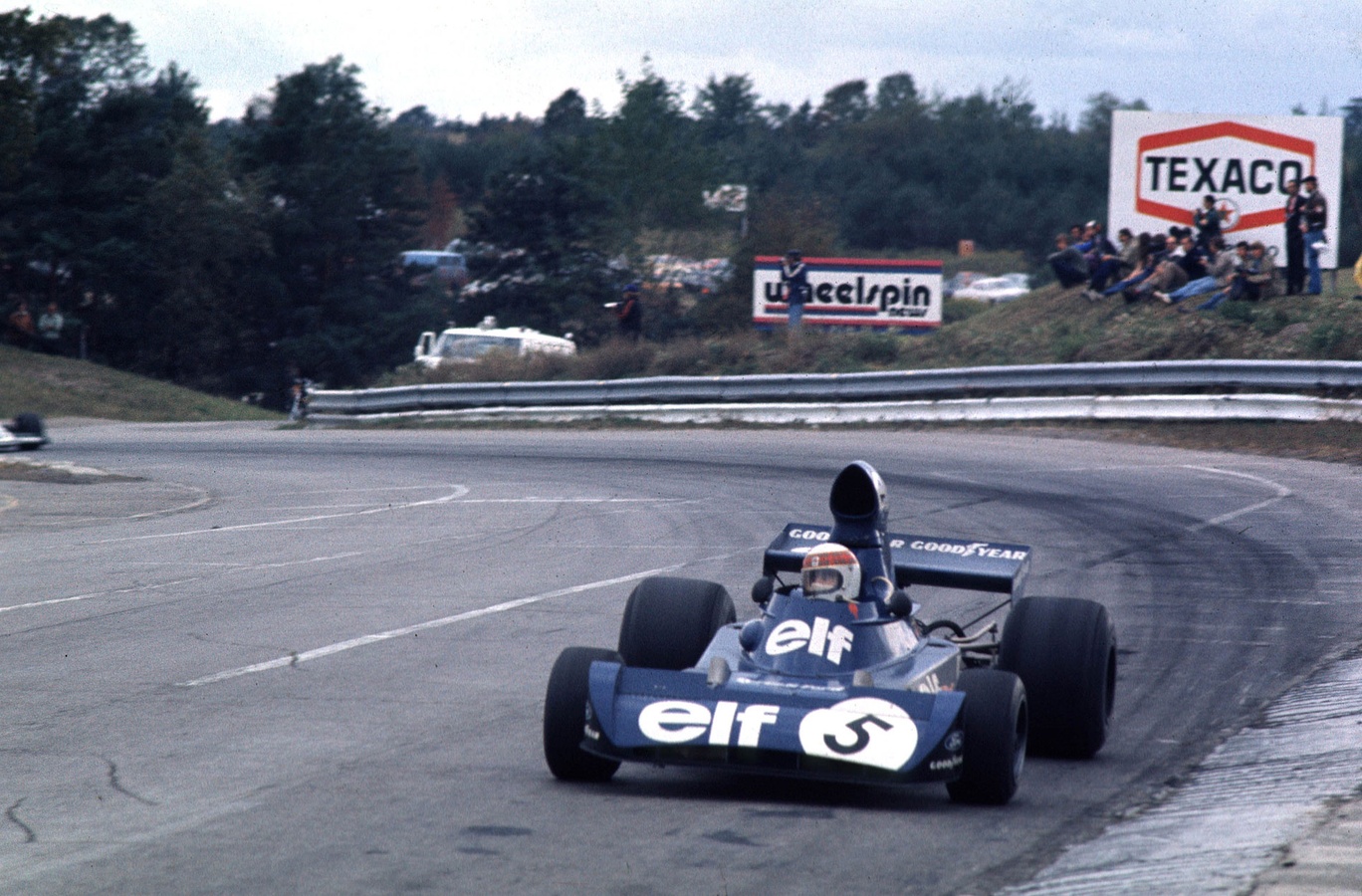 My analysis was that I had probably been leading when I stopped, particularly as I was about the last to do so, but that my stop would have knocked me back a few places. Perhaps not. Whatever my opinion might have been, it was clear that as far as race control was concerned I was leading. We trolled around behind the pace car for a few laps until finally it pulled off and I thought that as I was considered to be race leader I should definitely stay in that position. I took off as fast as I could and managed to pull out a bit of a lead, but soon I could see the blue Tyrrell of Jackie Stewart starting to edge up on me.

Eventually he caught up but it took him some laps to get past. He was a bit quicker on the long uphill straight and could get alongside as we crested the top of the hill, but my car was better on the brakes and worked well on turn-in to the very fast right-hander. Eventually he got far enough alongside to prevent me turning in on him, but I was able to keep him in sight for the rest of the race. Next thing I had Emerson coming up behind, but he was much faster on the straight than Jackie had been, so there was no chance of resisting him. I watched him move on and overtake Jackie as well.

After that I had challenges from Niki Lauda, whom I was able to deal with, and for the last seven or eight laps I was in a battle with Peter Revson, but managed to hold him off to the line. Revvy complained to me afterwards that my car had been blowing out a lot of oil, which coated his visor and made it impossible to pass. Whatever it takes! The chequered flag was waved, apparently at me, but I was sufficiently unsure that I deemed it wise to continue for another lap at a speed that ensured I was not overtaken. Therefore I was given the flag twice.

There was great excitement when I arrived back in the pits. I was the recipient of much backslapping and congratulations on my ‘win’. While I was delighted with the thought that we might have won, I had my reservations. I was of the opinion that Emerson may have been the winner, and I could see myself in third place. At that stage I was unsure of where Jackie Stewart had finished, but once I learned that he had made two visits to the pits, to be waved on by Ken Tyrrell at the first stop as there was no room to park, and then had his car fall off the jack at the second stop, I was fairly sure that he did not feature in the results.

After a time a number of people were summoned with their lap charts, but unfortunately [my partner] Judy was not one. She is one of the best lap charters I have ever encountered, to the extent that she could do the whole of Le Mans without a break of any sort (I wish my bladder control was that good), and her chart showed a very different result to that finally published by the organisers. The official chart had me stopping at a time when I most certainly did not, and in fact it reads as though the chart had been ‘reconstructed’ once a set of results had been decided upon. The following week Judy and I flew over to San Francisco where I was to ‘meet the family’ for the first time and we had taken every bit of information we could about the race. We pored over the charts, official and unofficial, for days and finally we came to the conclusion that I could only have been first or third.