A year has passed since we learned the sad news of Niki Lauda’s death. The Formula 1 paddock without Niki feels a little empty.

The legacy Niki bestowed on the F1 community is immense. While the sport has a proud seventy years of history, the impact and global nature of the modern Championship was forged in the late 1960s and 1970s. There are a handful of racers who, through their exploits on track and off it, are the architects of the afterglow that followed the golden age. Niki is at the heart of that group – but for McLaren, his legacy is something else.

McLaren were at a crossroads when Niki arrived in 1982. Bruce’s team had evolved into McLaren International through a merger with Ron Dennis’ Project Four Racing operation. Niki’s experience and confidence were instrumental in shaping this new McLaren, laying the groundwork for much of the success that would follow.

Niki’s four seasons with McLaren, revolved around the Austrian Grand Prix. It was here, in one of the high, old places of European racing, that the lodestone for his relationship with McLaren resided. During a commentary stint in 1981, Niki’s desire to race reignited, and here in 1985 he announced his intention to retire for good at the end of that season. In between, he took his only Austrian Grand Prix victory in an outrageous 1984 race, setting up an epic title showdown with team-mate Alain Prost and creating a comeback story for the ages.

Never shy of expressing an opinion, we think the best tribute we can pay is to hear the story in Niki’s own words. 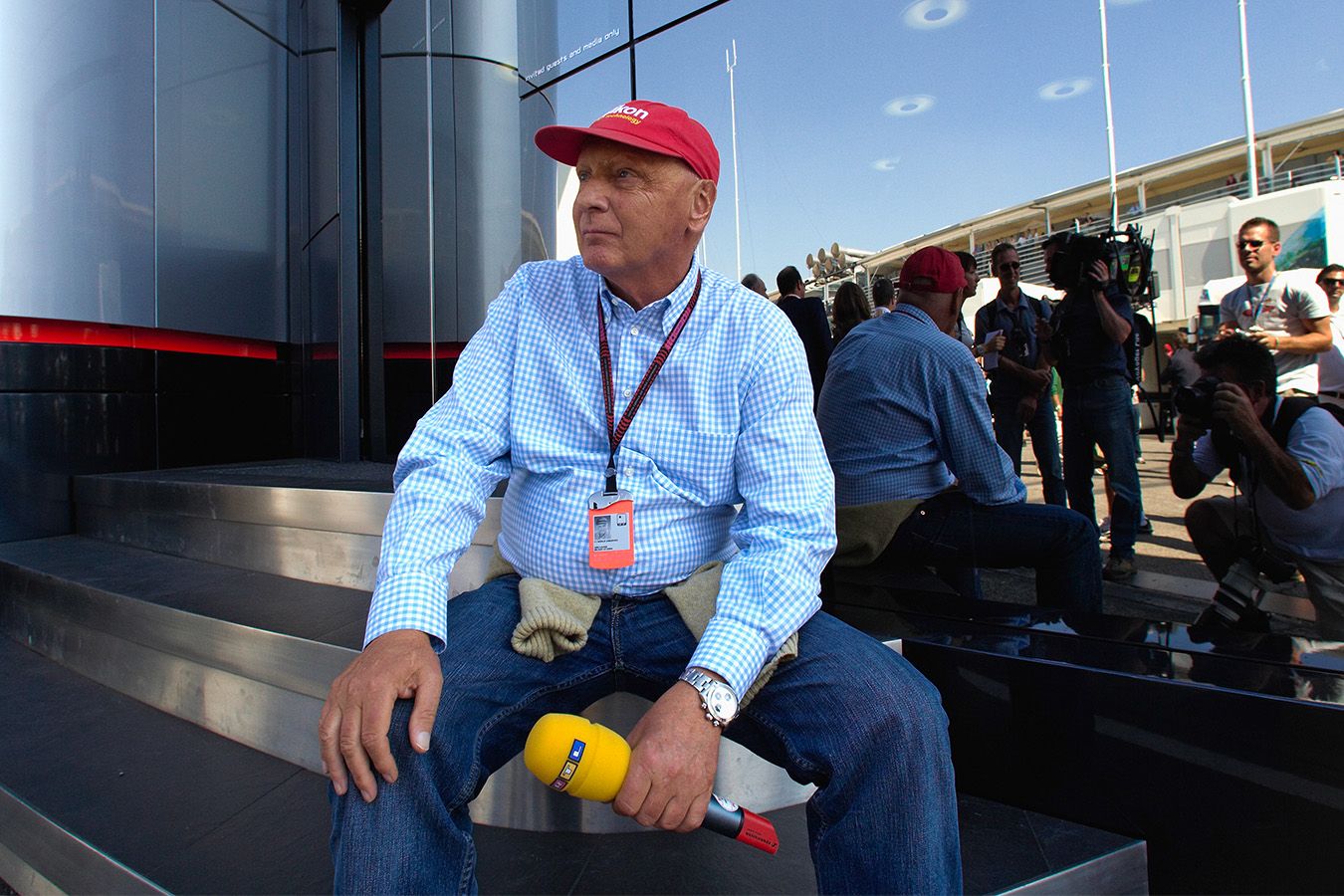 Niki Lauda retired from F1 in 1979. It was a very Niki-like decision: abrupt, definite and totally lacking in prevarication. He made the decision during practice for the Canadian Grand Prix and quit the Brabham team before the race. He wanted to concentrate on building his fledgling airline and was done with F1 – but F1 wasn’t done with him. Project Four had run a car for Niki in the BMW M1 Procar Championship, and Ron Dennis was particularly keen on tempting the Austrian back into an F1 cockpit. As Niki tells it, it wasn’t so much the persistent phone calls that wore him down but a serendipitous visit to his home grand prix that rekindled his interest.

“People ask, did I only come back for the money? No, that’s bullsh*t. You can’t race – and I mean really race – for money. You race because you like to race, or you need to race. Do that well, and you can make money. You don’t do it the other way around. I retired in 1979, when I had no interest in racing. Ron rang me every three months, asked if I wanted to come back. Each time I said, ‘no’.

“Then I went to the [1981] Austrian Grand Prix to commentate for Austrian TV. I was sitting up in the box, looked down, there was a huge start-line crash. ‘Sh*t! That’s good,’ I thought. Everything came back: instinct; fearlessness, all at once – and it shocked me. When I retired, I didn’t want to know any more. I wasn’t expecting that to change. It was over. Suddenly I got that push inside of me, and I liked it. Even in the worst situation.

“I checked the situation out and went to Monza a few weeks later. [John] Watson had a huge shunt in the McLaren, car caught fire, chaos everywhere, and again I thought ‘sh*t, this is good’. My instinct as a racing driver had come back. On Monday, Ron called and asked if I wanted to test. Yes. I did. I went to Donington [Park], tested and found out for myself that I still had the instinct and capability to do it. So I came back. And that was the only reason.”

The one that got away

Lauda was retained to drive alongside Watson in 1982. The partnership was immediately successful. Lauda had an early-season victory at Long Beach and added another at Brands Hatch. Watson took victories at Zolder and Detroit. Niki ended the year fifth in the Drivers’ Championship and McLaren were second in the Constructors’. It was a successful return – though Niki regarded it as the title that got away. 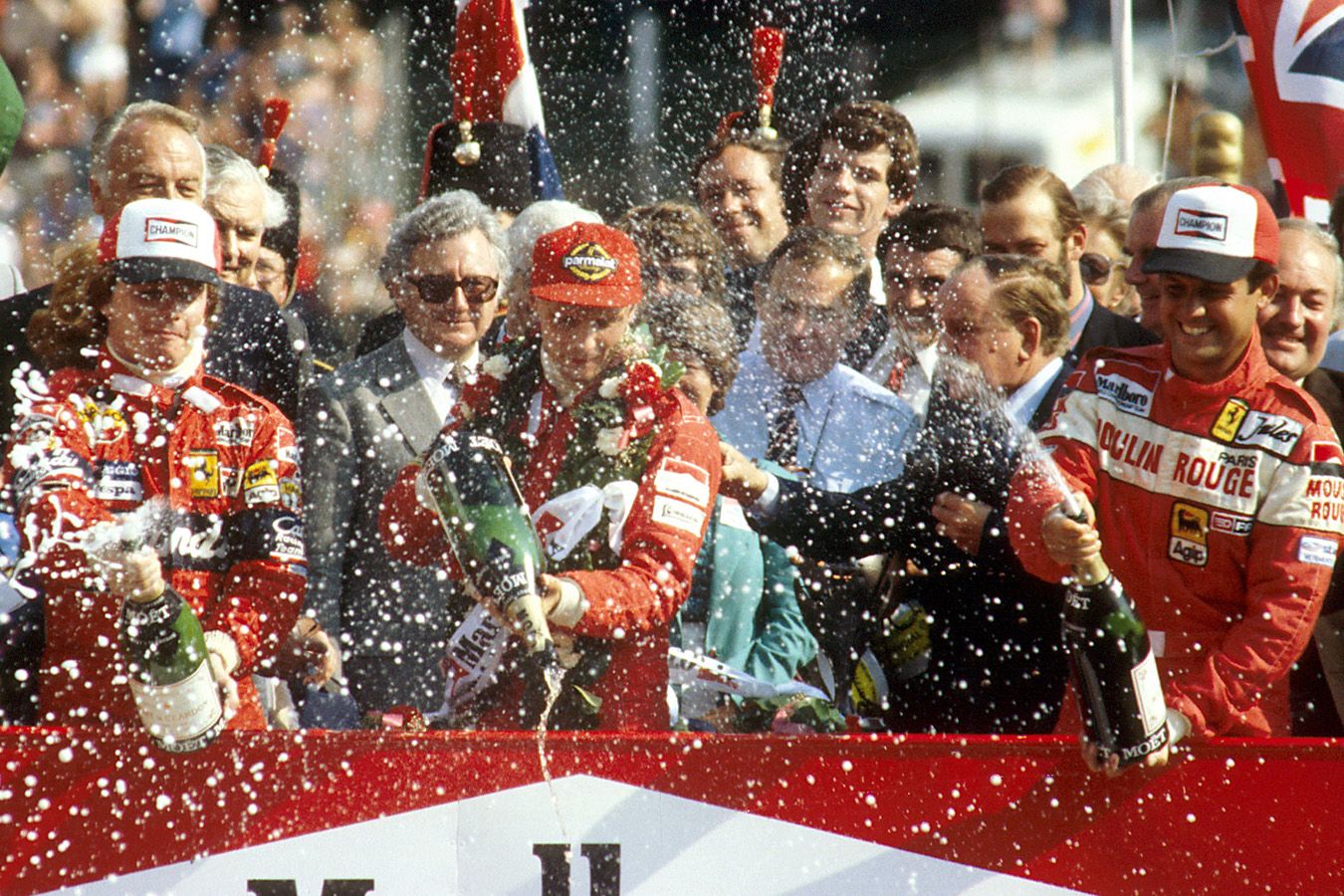 “When did I start at McLaren? 1982. We had the BMWs, Ferraris and Renaults with turbo engines. We had the normally aspirated engines, so we had a huge horsepower deficit and effectively we could not win anything – but [Gilles] Villeneuve got killed, [Didier] Pironi crashed as Hockenheim, and I realised too late that there was a chance for us to win that championship. [Keke] Rosberg won with just that one win. I think I screwed that season up by starting the year unhappy with the lack of horsepower and thinking we couldn’t win.

1983 was a year of transition. The venerable Cosworth DFV engine was reaching the end of the line, outgunned by the enormous power of the turbo cars. Watson beat Lauda in an early season McLaren one-two at Long Beach, but the most successful engine in F1 history would win only twice more. Niki qualified 14th at his home grand prix and climbed through the field to a creditable sixth – but it was to be his final race in a normally-aspirated F1 car. At the next round, with the season reaching its endgame, Niki gave a debut in Holland to the Porsche-built TAG 1.5-litre turbo engine in a reworked MP4/1E. It would have repercussions for the following season – as would ensuing changes in the other car with Alain Prost’s return to McLaren.

“Watson screwed me! He and Ron were arguing about a contract. I think they were something like $5,000 apart. I told John to sign the deal and I’d give him the $5,000 myself. But he didn’t sign, and then Prost fell out with Renault. Usually by that time all the contracts would be signed, but suddenly Prost was on the market. Watson hadn’t signed, and suddenly I found myself with a young, massively talented team-mate. I remember thinking, no problem, I’ll fight him off. The first race he had pole position, I was half a second slower. The next race I speeded up, but I was still three-tenths behind him. He went quicker again. He had the ability to do that – which naturally I hated!”

1984 remains the tightest championship in the history of Formula 1. The McLaren MP4/2 was the car to beat – with the Lauda/Prost combination taking 12 victories across the 16-race season, and the team scoring more than double the points of its nearest rival in the Constructors’ Championship. It was, however, the Drivers’ Championship that captured the imagination with Niki eventually crowned World Champion by the slender margin of half a point. It was, in many ways, a forerunner of the battles later in the decade between Prost and Ayrton Senna – though in 1984 ‘Le Professeur’ was still the student.

“With the turbos, we had the capability to double the power for a one-lap burst [in qualifying], up to 1200 hp, with qualifying tyres to do it. In the race it was 600 hp. I hated this. For me it was a nonsense. Prost handled it better, he seemed to like it. After three races, I’d accepted that I would have problems in qualifying with him. I switched my strategy to only work for the race. I didn’t worry about him, I didn’t think about qualifying, I accepted Prost would out-qualify me – but in the race I’d blow him away. That’s how I won.”

Picture perfect at the 1984 Portuguese GP 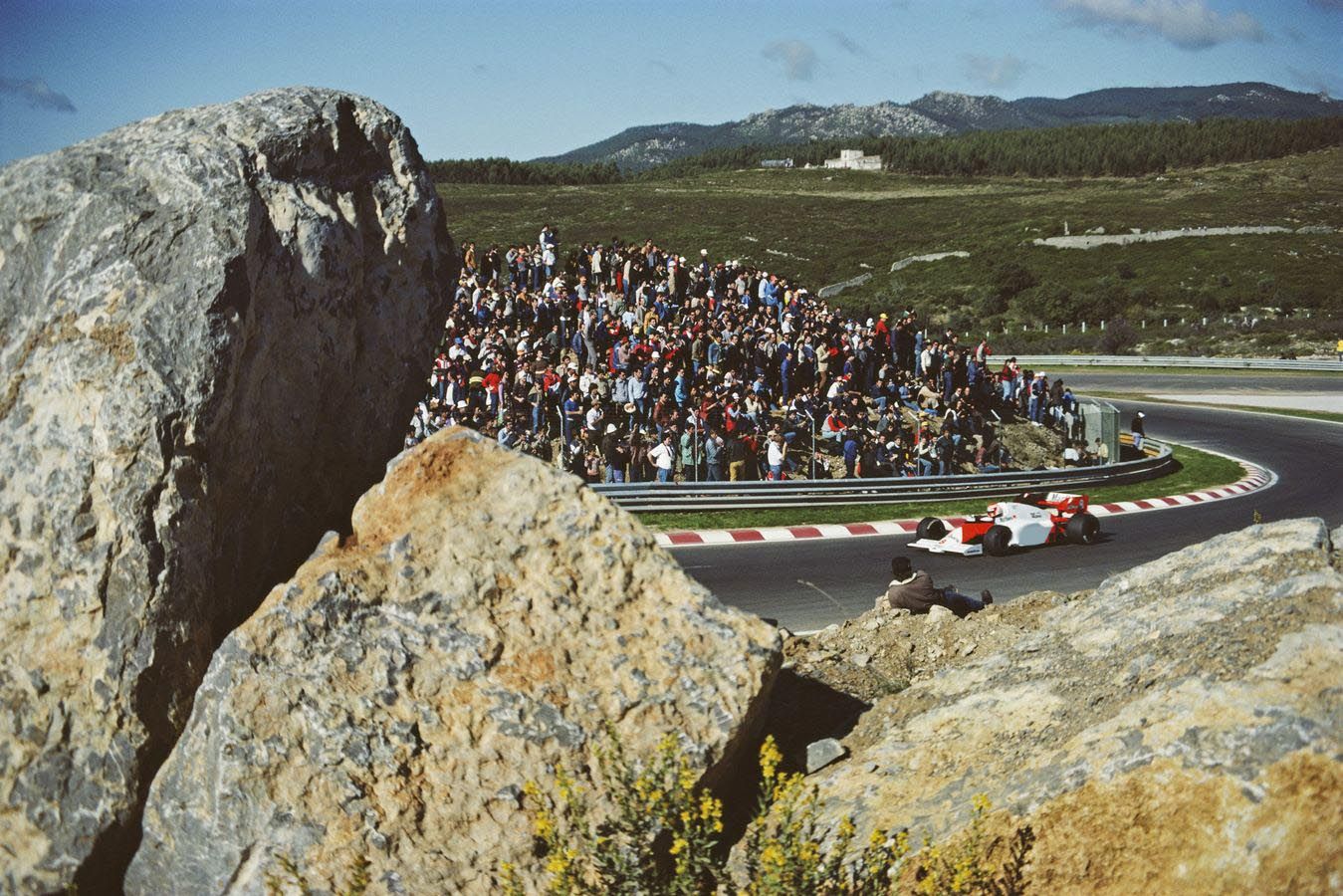 Picture perfect at the 1984 Portuguese GP

That wasn’t entirely how it worked out: Alain indeed came out of the qualifying battle 15-1 ahead but he also won seven races to Niki’s five. However, one of Niki’s five was F1’s 400th race, an unforgettable Austrian Grand Prix. The race was famous for a failure of the starting lights, and then a very slow formation lap, led by polesitter Nelson Piquet, keen to prevent the McLarens of Lauda and Prost scrubbing-in fresh tyres. Prost was 4.5 points ahead of Lauda in the championship battle, but spun off on oil. Lauda inherited second from his team-mate and then attacked Piquet. He took the lead but then slowed, struggling to find a gear, before recovering to take a long-overdue home victory – but more significantly, the lead of the championship with four races remaining – a lead he did not relinquish on his way to a third, and remarkable, World Championship.

“This was a famous race! The lights weren’t a problem for me, but the gearbox was. Nelson didn’t realise that I had a gear broken and didn’t attack me. In the end, I won the Championship that year by half a point – I think this [race] is what saved me.”

A year on from his triumph at the fast, flowing Österreichring, Niki chose his home race to announce his second, final retirement from F1 – very much against the wishes of his team principal who wanted him for at least another year. This time, however, he would go on to complete the season. Niki had an eventful afternoon in Austria. Starting third, a rocket start saw him take the lead, only for the race to be red-flagged. He was leading again when his turbo gave out, forcing him to retire.

Announcing Niki's retirement at the end of the season 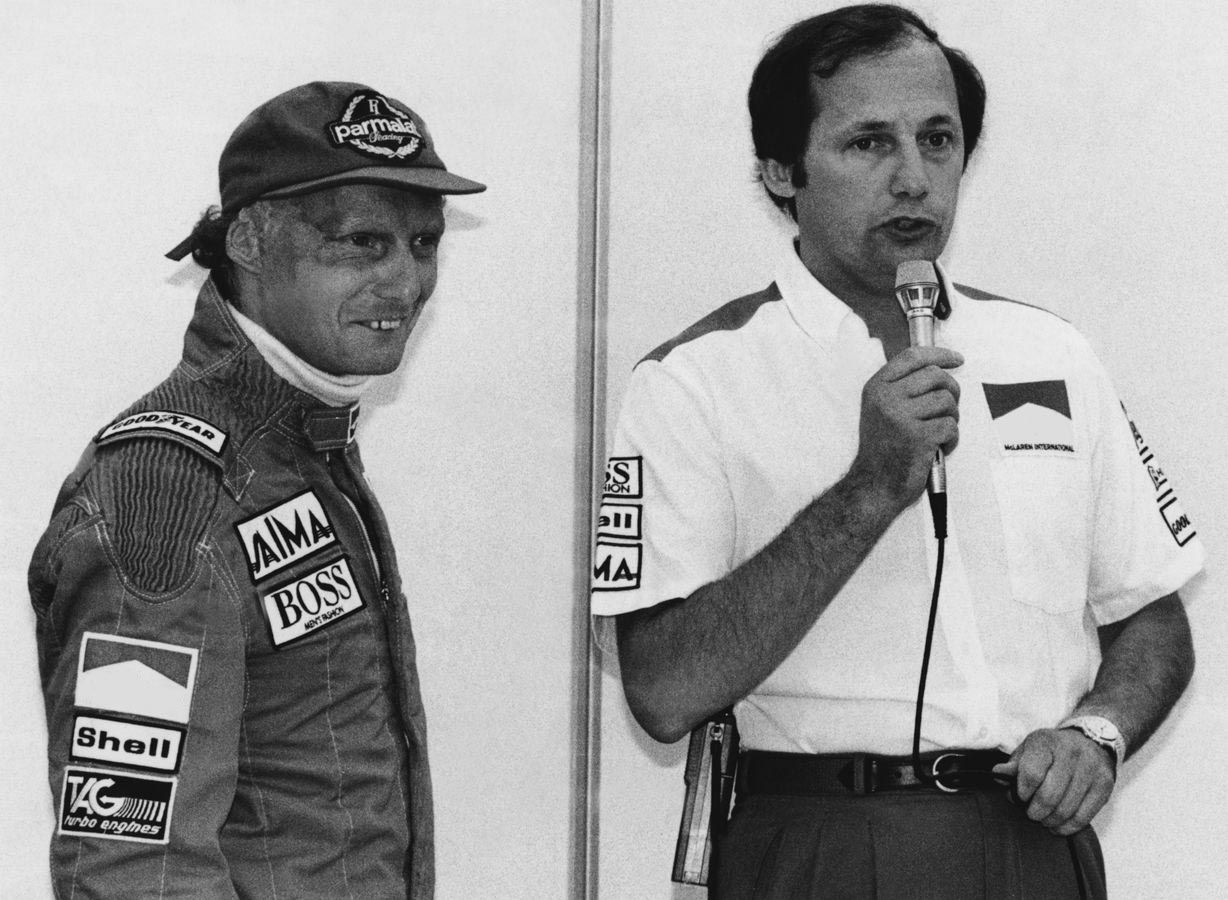 Announcing Niki's retirement at the end of the season

“Retirement. It was logical. You have to finish eventually. It was just the right time for me. I retired because Prost was clearly the next generation. I was World Champion back when he first got a driving licence. I realised the new generation were kicking and pushing to be let out and I only won in 1984 because of experience. I had more than him, so I had more race speed. A year later it was the other way around. It was clear for me what should happen. My time had arrived: there was another guy in the car who was quicker than me, so it was time to go.

“It was the second time I’d retired so I knew what I was doing! It was a good decision. I drove in good spirits after that. I didn’t win in Austria but I won at Zandvoort in the next race. I think I finished my driving career correctly.”

Niki is missed by all at McLaren.