Mika Häkkinen's first F1 win 25 years on, as told by those who were there

Mika Häkkinen's first F1 win 25 years on, as told by those who were there

Mika Häkkinen’s having a good time in Texas. The paddock at COTA is jam-packed with people, everyone wants a photo, and Mika is happy to oblige. The stoic intensity of his racing years has been replaced with a toothy grin and a definite twinkle in the eye.

He’s happy to tell the stories of the championship-winning years, the era-defining battles with Ferrari and Michael Schumacher. No-one’s really asking about the fast-approaching 25th anniversary of his first F1 victory – but, leaning against the garage wall, he’s more than happy to delve into the memory banks and talk about that one too. It is, he says, a day that’s never far from the front of his mind.

“Honestly, it does feel like a long time ago – but the memory is still very strong,” he says. “It was very emotional, very powerful, so automatically there are memories. It’s an incredible feeling to get your first victory.”

The 1997 European Grand Prix at Jerez retains a degree of notoriety – very little of which has anything to do with McLaren ending the season with a one-two finish and Mika leading David Coulthard across the line. 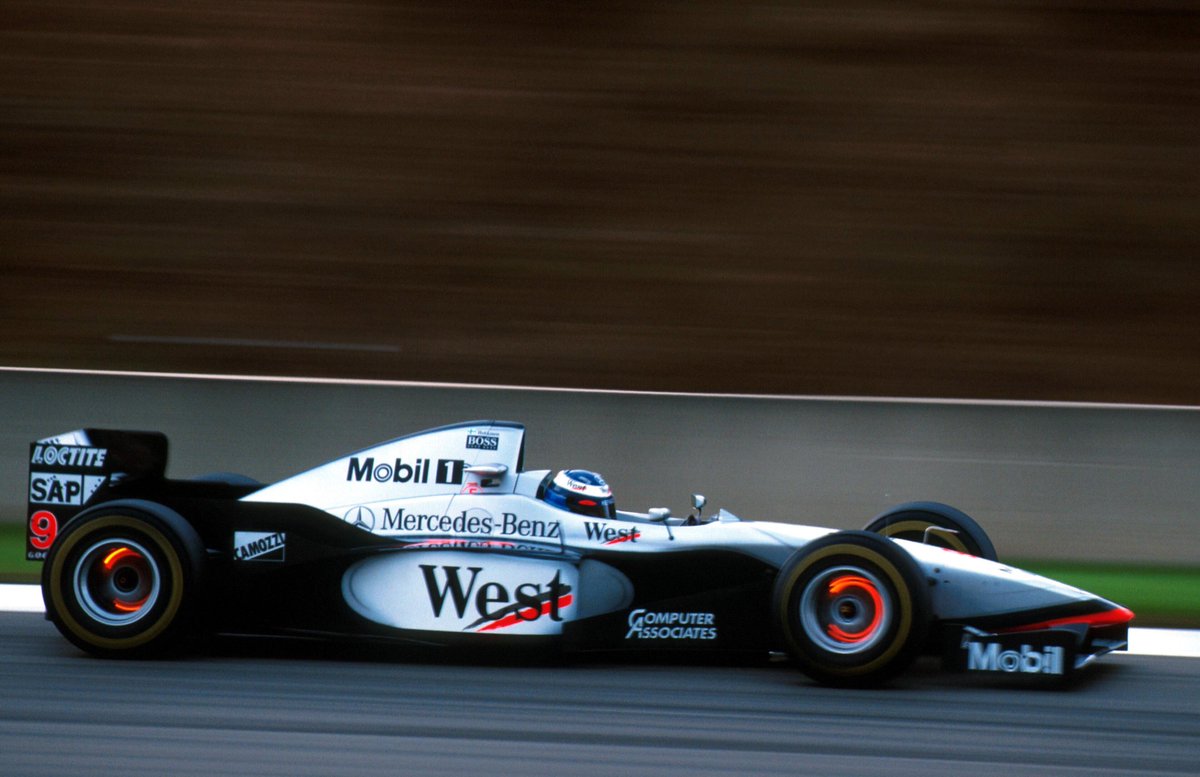 A first grand prix victory for @F1MikaHakkinen #OnThisDay 25 years ago. 🏆

There would be 19 more in the impressive career of the two-time World Drivers' Champion. 👏 https://t.co/JnCNZQ2caN

A first grand prix victory for @F1MikaHakkinen #OnThisDay 25 years ago. 🏆

There would be 19 more in the impressive career of the two-time World Drivers' Champion. 👏 https://t.co/JnCNZQ2caN

The race is perhaps better remembered for the title showdown between Williams’ Jacques Villeneuve and Ferrari’s Schumacher. Schumacher went to Jerez – the final round of the season – leading the Drivers’ Championship by a solitary point. The closeness of the battle was exemplified by the times in qualifying, with Villeneuve, Schumacher and Heinz-Harald Frentzen in the second Williams, all setting the same time – 1:21.072 – with Villeneuve on pole by virtue of setting his time first.

A title decider is a tricky proposition for the supporting cast. On the one hand, no-one wants to get in the way of a title fight: on the other, it’s a brilliant opportunity to prosper while the championship protagonists are more concerned looking at each-other.

“It was definitely an opportunity,” recalls Mika. “When you’re in a title fight, there’s incredible psychological pressure that you’re living with all the time. You just have to stay cool. And we had a good car. The MP4/12 was a good car. It was almost there – maybe a bit too much understeer but very quick, and Jerez is a beautiful track to race. Physically, very demanding but a fantastic place for an F1 car.”

The moment everyone remembers came on lap 48. Villeneuve, running second, attempted to pass Schumacher for the lead, up the inside into the Dry Sac corner (these days, Curva Dani Pedrosa), Schumacher turned in on Villeneuve, the pair collided, Schumacher bounced off to beach in the gravel, race over, Villeneuve continued – but with damage. 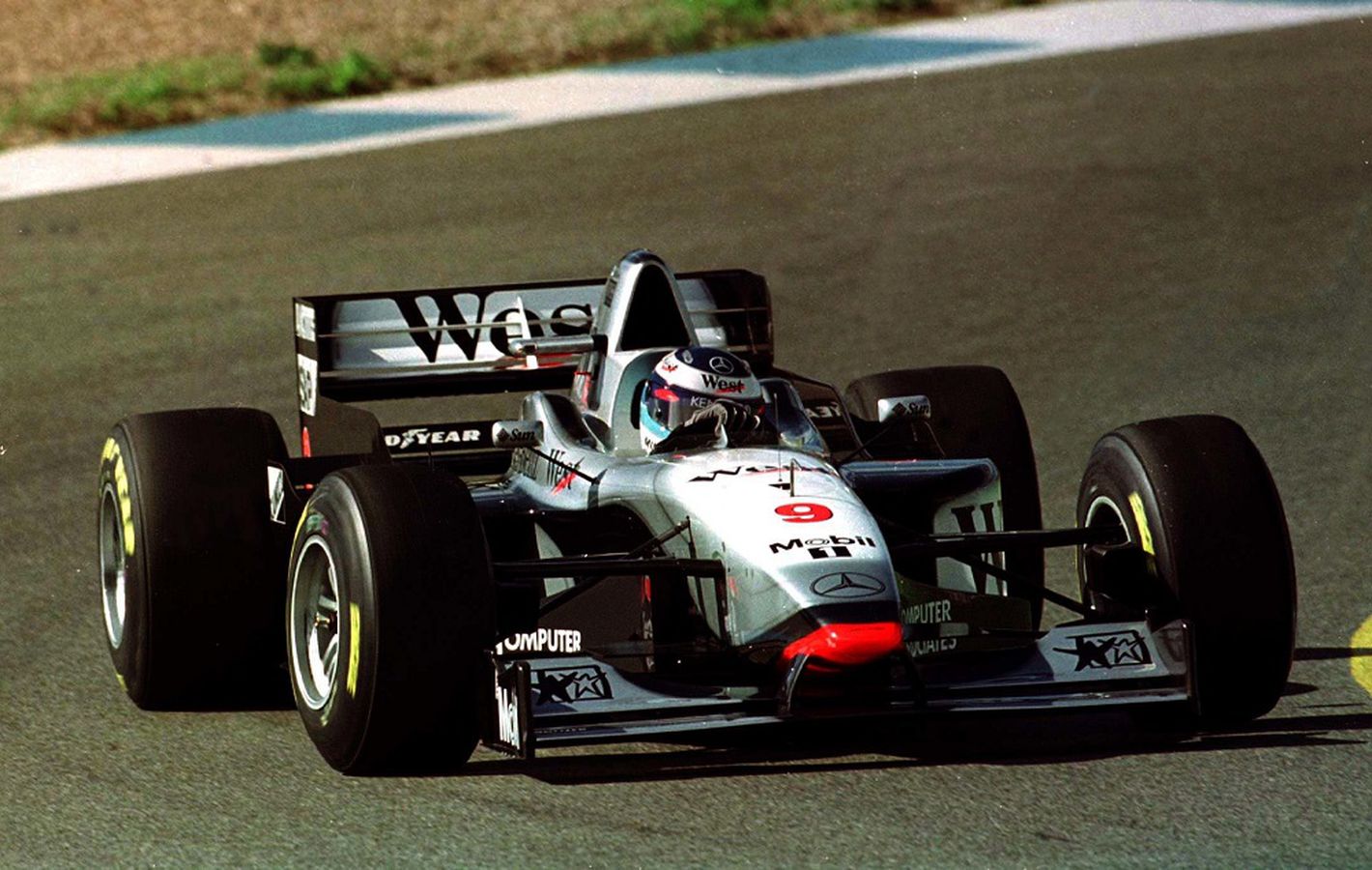 DC and Mika were running second and third, hunting down the ailing Williams. In the pit-lane Patrick Head, Williams' Technical Director and Co-Owner wanders down to the McLaren pit-wall for a word with McLaren Team Principal Ron Dennis: Jacques just needs to finish in the points. He isn’t going to get in the way of the McLarens.

The details of the conversation were not immediately apparent to the outside world, or indeed, to those watching on from the garage. “We didn’t know what they were discussing to start with,” recalls Keith Barnard, No.2 Mechanic on Mika’s car in 1997. “We got wind that something was going on, because they obviously didn't often meet up and chat in the middle of a race.”

Jo Ramirez, McLaren Team Co-Ordinator, was on the pit-wall, and recalls the details of the conversation. “I remember, Patrick Head came to us, and he said: ‘Jacques is not going to put up any resistance.’ He only needed one point to be World Champion, so we passed on the message to the drivers they could pass Jacques and he wouldn’t fight.”

“I wasn’t 100 per cent aware of what was going on,” recollects Mika. “The collision between Michael and Villeneuve, the communication between Williams and McLaren, obviously I didn’t know about that until after. They simply told me on the radio that Villeneuve has a problem, he’s going to be slow and he won’t be fighting. I didn’t know that he’d let me go through. It was a beautiful moment for me, to take the lead on the final lap, and a gentlemanly move from him.” 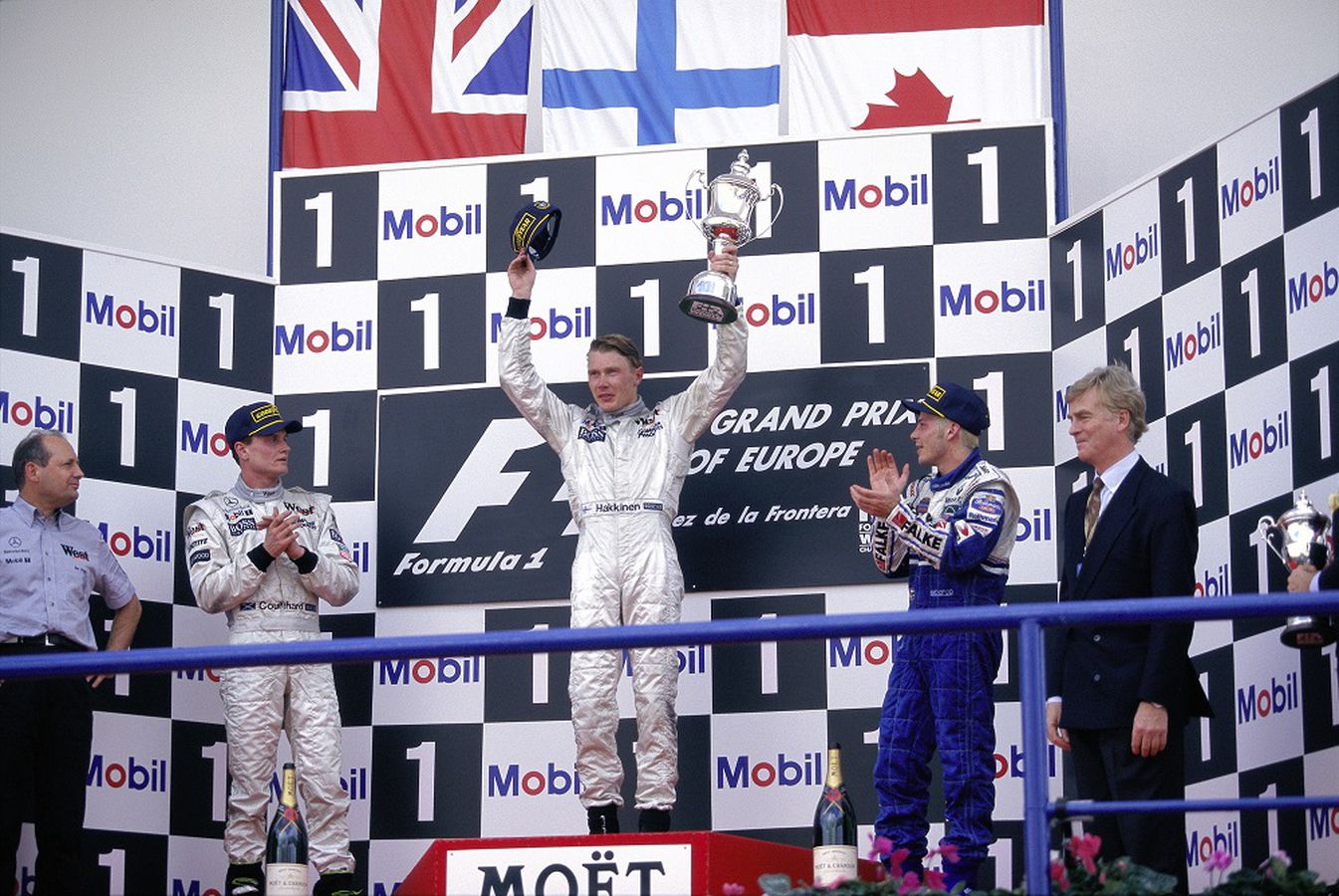 Even so, it was a close-run thing. Mika caught and passed Villeneuve on the final lap, and was able to savour leading the race for only a few corners, taking the chequered flag with DC and Villeneuve in his slipstream. On the podium, the two McLaren drivers hoisted the Williams man onto their shoulders. Everyone got what they wanted.

“David was second, and Mika was third and when we told the drivers Villeneuve wouldn’t fight, at the same time we asked David to relinquish the position and let Mika go through,” recalls Ramirez. “David, of course, didn’t want to do that, and said it wasn’t right, but in the end it happened. Mika had qualified ahead and been ahead before the pit-stops, where the positions swapped. The car had let Mika down a few times over the season and he really should already have taken that first victory.

“It’s no secret that Mika has always been Ron Dennis’ favourite driver at McLaren but Ron also felt it would be stronger for the team psychologically, if it could go into 1998 with two grand prix winners in the cockpit. Ferrari protested that the race was fixed – but I think that was more to deflect attention away from Michael being stripped of his points and his position in the Championship for causing the collision – it was a pretty interesting grand prix!”

Mika on the phone after his maiden F1 victory 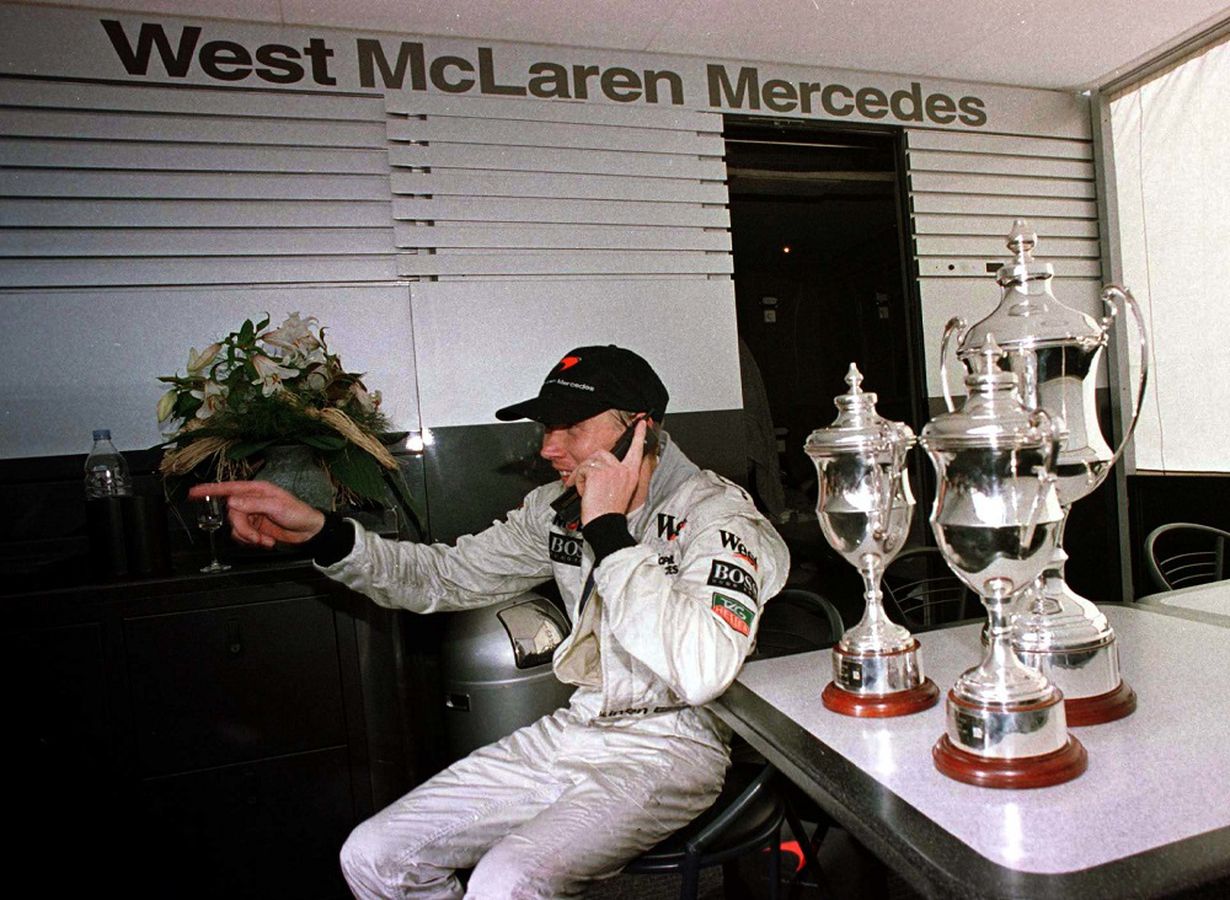 Mika on the phone after his maiden F1 victory

Did winning in Jerez give Mika the perfect lead-out into his 1998 World Championship victory. Keith Barnard thinks not. “To be honest, with the car we had for 1998, I don’t think it made any difference! We knew he was quick enough.

"Mika was incredibly fast, especially when he was on it in qualifying. Some days you wondered how he could do what he could do. He’d had a bit of bad luck and some cars that weren’t good enough – either not quick enough or prone to let him down with reliability – but when we got a really good car that was a little bit more reliable, he did the business.”

Mika sees it slightly differently: “Winning gives you such amazing confidence. People stop asking when you’re going to win because it’s done. You can focus on the next challenge, which was winning more, and winning World Championships.

“Jerez was the last grand prix of the year, so I got to be a winner for the whole winter. I got a lot of confidence from that, and when we started for 1998, I knew straight away. I knew how good the car was, and I knew I had the experience I needed to win. Everything just slotted into the right place.” 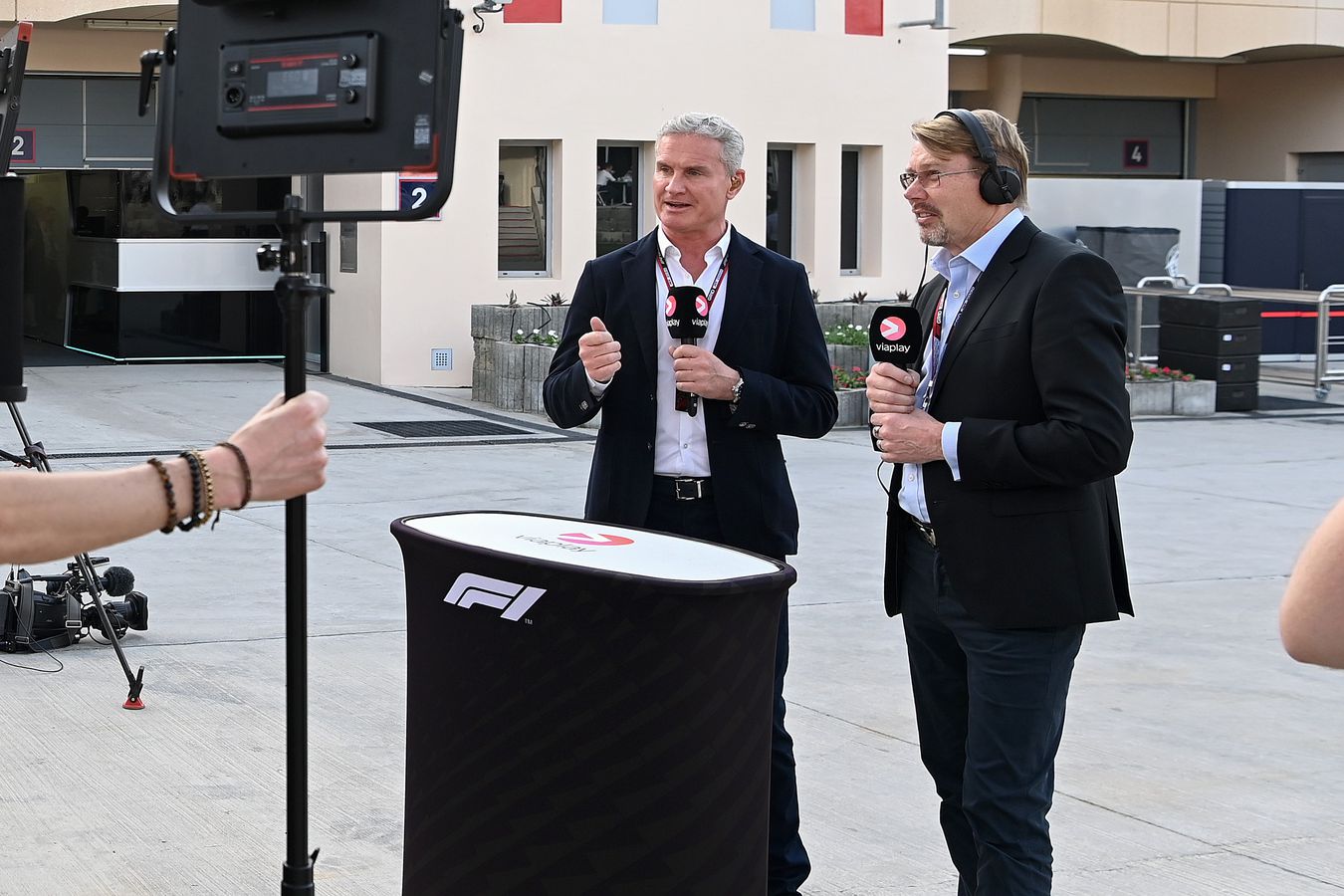 The team’s celebrations were a little muted immediately post-race: “I think we were a little miffed to be given the win rather than taking it on merit, because those weren’t the circumstances the guys in the garage really wanted to win under,” recalls Barnard.

“Yep, it wasn’t a really fair racing victory,” adds Mika. “But that doesn’t matter at the end of the day. What matters is when you get the victory, it gives you great confidence.”

Things picked up later at the victory party, with the drivers, team and sponsors decamping to a local bodega for a hastily arranged but – in the proper McLaren style – immaculately organised party. Details on that event are somewhat hazy (“there certainly were a few sore heads in the morning,” recalls Barnard) but everyone present recalls leaving Spain with a strong sense of optimism for 1998 – as well as three trophies and a hangover.

"You have to trust each other"

The US Grand Prix according to social media