The story of a remarkable race

The story of a remarkable race

The 2001 United States Grand Prix was a remarkable race for a number of reasons.

First of all, it came at a time when the world, and particularly the host nation, was in shock. On 11 September 2001 the atrocity that we now know as 911 had occurred – and, like so many other people, I had watched it unfolding on my TV screen. I will never forget how shocked I felt, sitting in the drawing room of my Monaco apartment, seeing first one tower and then the other crumble and fall. I felt tremendous anger and sympathy, as I think everyone did. I still do, in fact.

I flew to Indianapolis less than two weeks later, and, as the pilot and flight crew prepared for landing, I remember feeling proud of everyone in our sport for having opted to go ahead with the race, despite calls from certain quarters that it should be abandoned for reasons of security. It was important in my opinion that we should offer support for, and confidence in, a grieving and unnerved nation, by putting on a motor race in their back yard – or ‘Brickyard’ to be precise – and I am extremely glad that we did just that. 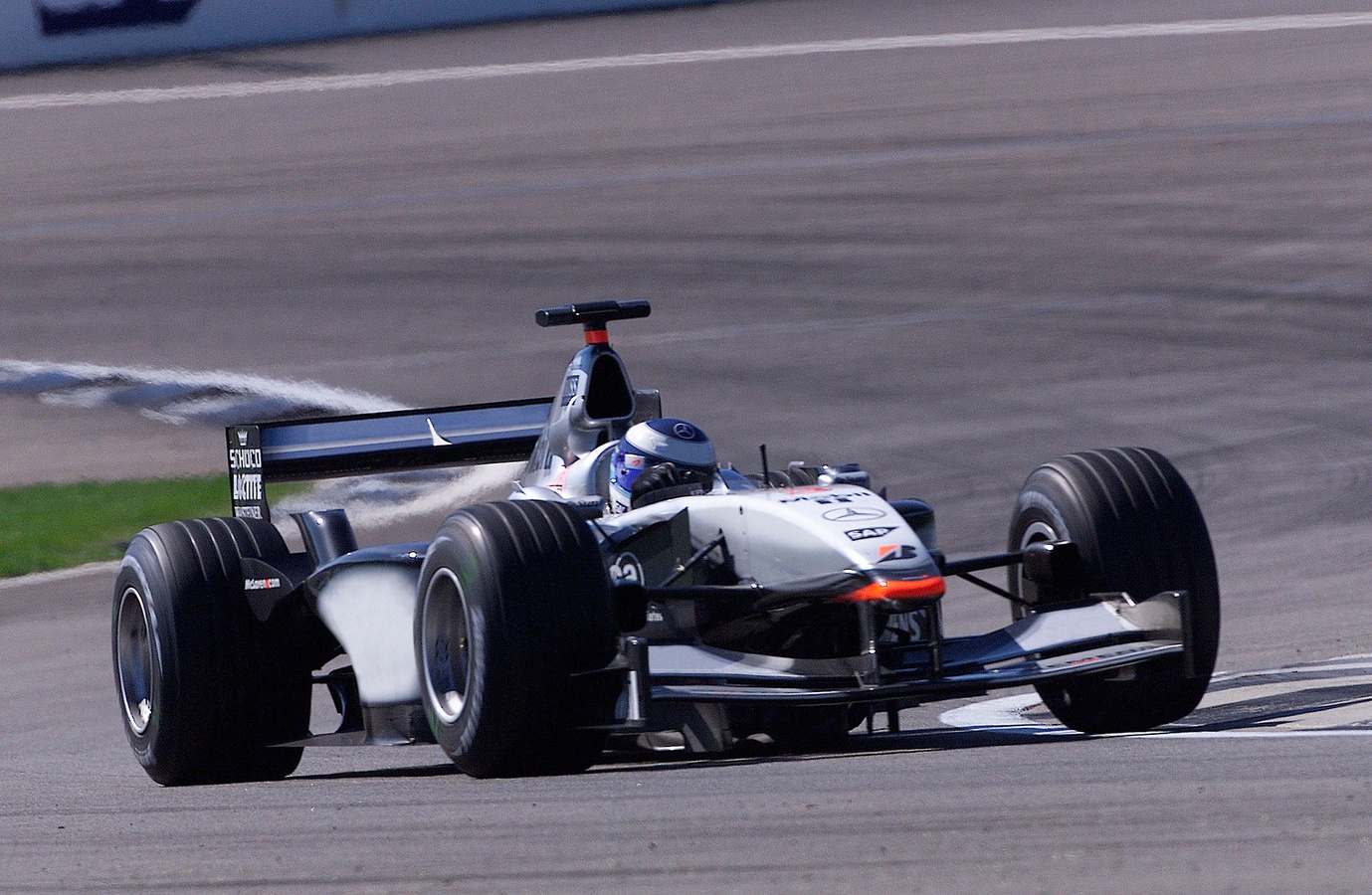 From a racing perspective, 2001 had been a very frustrating year for me and all at McLaren-Mercedes. Having been beaten into second place in 2000 by our great rivals, Michael Schumacher and Ferrari, we had redoubled our efforts over the winter with the intention of coming back strongly. It was not just a simple matter of improving what we had; there were new aerodynamic rules, the return of electronic driver aids from the Spanish Grand Prix onwards, and rivals running with a new tyre supplier – Michelin – for the engineers and strategists to consider. And, after just half a dozen laps of practice for the first grand prix of the year, in Melbourne, Michael broke the lap record, which had stood since 1997. I knew then that 2001 would be a brutal, challenging season for us.

I began to feel imprisoned, suffocated even, by bad fortune. In Melbourne there was a huge accident in which one of the marshals, Graham Beveridge, lost his life, then a suspension part broke on my car and I hit the tyre wall so hard that the breath exploded from my lungs. The next grand prix, in Sepang, was so wet that we drivers could barely see – and, worse, even as the conditions dried, Michael drove away from us at a rate of five seconds per lap. I tried to put all of it behind me and start the season anew in Sao Paulo, only to stall on the grid on race day.

In Spain I had Michael beaten, however. I took my time, followed the clever race strategy that our engineers had devised, pushed really hard before my final pit-stop, and came out ahead. He had no answer to that, a tactic he himself had perfected and executed to such devastating effect on so many occasions. Yet then, as I powered across the line to start my final lap, I felt a tremor go through the engine as it began to spew out smoke and sparks. I eventually finished ninth, bitterly disappointed. Later, Michael came to see me, to say he could take no joy in winning a race like that. It was a kind gesture, but I was inconsolable.

I stalled on the grid again in Austria, then lost the car to mechanical failure on the streets of Monaco. I was overtaken by a sense that the world championship was happening without me. Finally it all came together at Silverstone, that beautiful and flowing high-speed racetrack which, when you have a fast car working perfectly, almost sings to you. Michael had taken the pole but on the fifth lap I passed him, and, as the image of the red Ferrari diminished in my mirrors, I allowed myself to enjoy the feeling of driving my car, and to push to the back of my mind the disappointment of Spain and the nagging fear that something like that just might happen again. But it did not – and, as I took the chequered flag still in a commanding lead, I felt relief and joy at winning in Great Britain, at Silverstone no less, the wonderful old airfield-based circuit on which the first ever world championship Formula 1 race had been run in 1950. The victory meant so much for me and for the team. 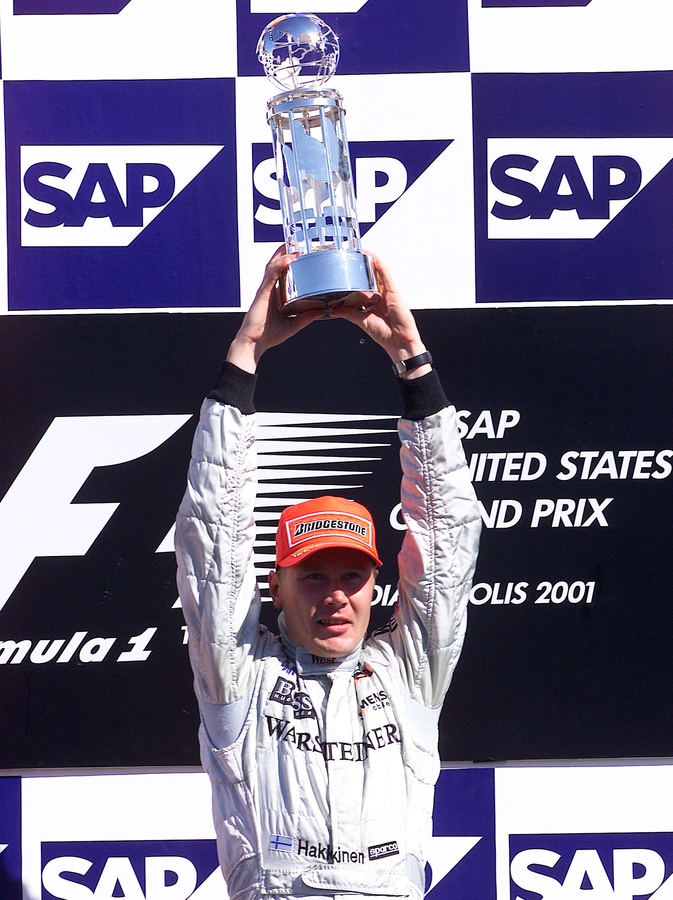 But by then it was July, and I had 19 points to Michael’s 84. Winning the championship was unlikely, although not impossible. But it was not to be. In subsequent races we had more problems – some with me, some with the car – and it became clear that the drivers’ title was slipping away. It felt so frustrating to be giving points away through unreliability and, I admit, the occasional driving error on my part, but I think they were caused by our mounting desperation to get back on terms with Michael and Ferrari, and perhaps we left insufficient margin in terms of both design ambition (the team) and on-track boldness (me) in our quest to do so.

I found it difficult to keep my cool. Sometimes I felt like screaming. Perhaps I began to close myself off. People in the press wrote that it looked as though I was no longer trying, that I had given up. I had not given up at all, of course, but still the results refused to come.

As I drove through the famous gates on Thursday 27 September, I had an odd feeling, a feeling I had hardly ever had before: it was not quite a premonition, but it was an eerie confidence. “You’re going to win here this weekend, Mika,” a voice seemed to be saying to me.

I qualified well – P2 behind Michael’s pole-winning Ferrari – but more satisfying even than earning a front-row start was the feeling of having gone toe-to-toe with Michael once again, trading super-fast lap-times like a pair of prize-fighters raining blows on one another. It was our own private battle, both of us digging deeper with every lap.

Race day dawned dry, cool but sunny: perfect conditions for grand prix racing. But then everything began to go wrong. First, I slid off the track into the guardrail at the end of the infield straight in the warm-up, damaging my car’s suspension and requiring a massive job by the ever-brilliant McLaren-Mercedes pit-crew to get my car ready to race. And then, even worse, a few hours later, we were told that I had failed to wait for the green light to begin the warm-up, and as a result my best qualifying lap would be taken away, demoting me from P2 on the grid to P4.

I was furious – because, to be honest, I did not think it was fair. I had not done it on purpose – I had been unsighted by the glare of a low sun – and I had gained no competitive advantage. It was clearly a silly slip-up – nothing more, nothing less – and a reprimand or a fine would have been more proportional a penalty. As it was, though, I was now no longer going to start the race from the front row, alongside Michael, but behind not only Michael but also the Williams-BMWs of Michael’s brother Ralf and Juan Pablo Montoya, both of which were extremely fast in a straight line.

But, even so, as I drove to the grid, that mysterious voice was there with me: “Mika, you can still win this.” 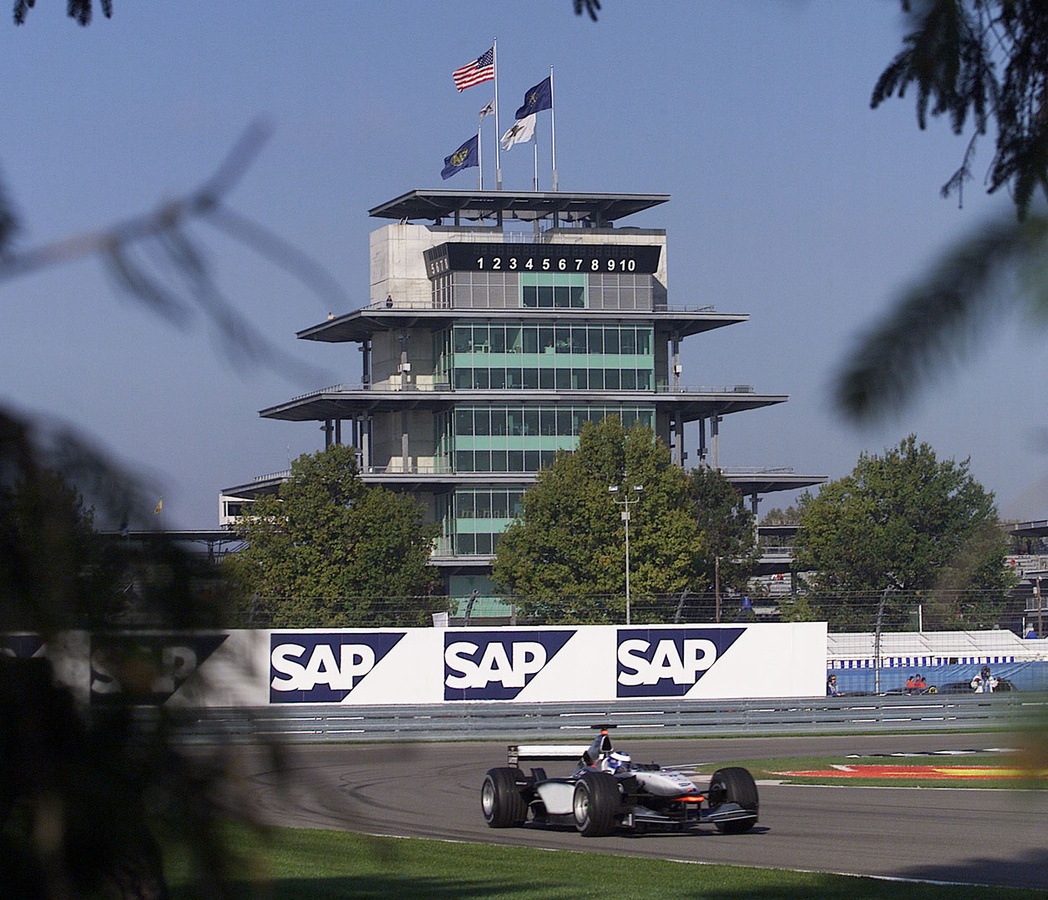 We had set my car up with less downforce than felt comfortable, confident that, as the asphalt rubbered-up during the race, I would find grip enough and would thereby be able to achieve excellent lap-times by virtue of my car’s increased straight-line speed. And I did just that. After getting the start just right, I focused on containing myself and allowing Michael, his team-mate Rubens Barrichello, Ralf and Juan Pablo to fight with one another up ahead, while I waited for the track conditions to evolve to my advantage.

Ralf pitted and emerged in the lower part of the top 10, playing no further part in the battle for the lead, then Juan Pablo stopped with a mechanical problem, leaving just two cars ahead of me: the two Ferraris of Rubens, in the lead, and Michael, in second place. Soon I saw that I was gaining on Michael. As I drew closer to him, I began to see that his Ferrari was clearly easier to drive than my McLaren-Mercedes on the twisty bits, but my McLaren-Mercedes was quicker than his Ferrari on the straights – a result of my McLaren-Mercedes engineers’ cleverness in selecting a lower-downforce set-up for me – and that duly enabled me to press home my advantage and move ahead of Michael during the all-important pit-stop exchange.

Rubens was still some way ahead, but not by far enough to remain in the lead after coming in for his final stop. So now my way was clear, with Michael still several seconds behind me. Here, in this magnificent speedbowl, the home of motor racing in the USA, I had vanquished my greatest rival.

As I drove down Victory Lane, thinking of all the heroes of the past who had driven along that famous pit-lane before me, I felt immense pride. I also felt an enormous sense of gratitude to my McLaren-Mercedes team, who had set my car up brilliantly, with cool-headed strategic vision. 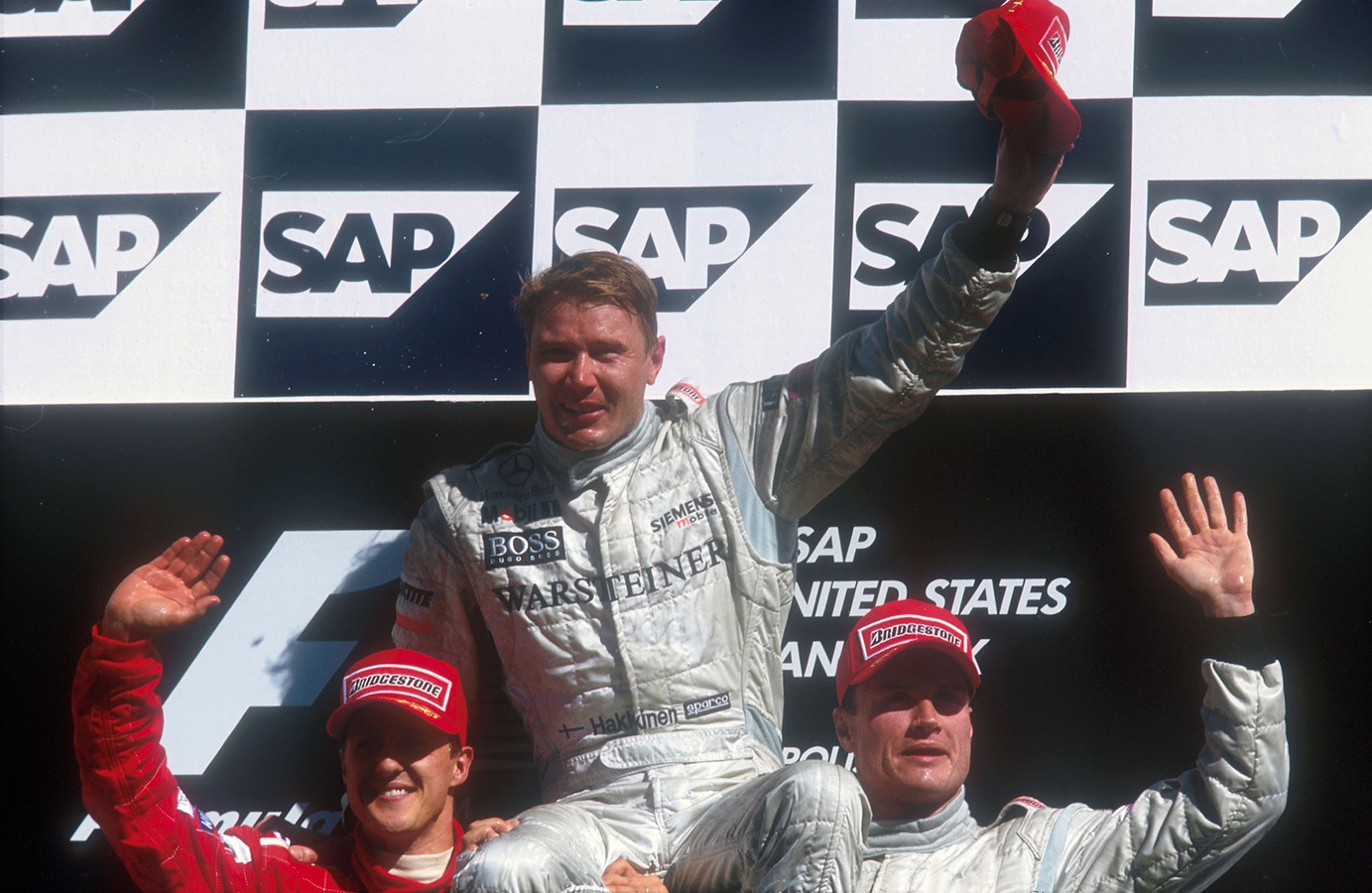 That evening I celebrated – and reflected – with my team-mates. I had already privately told Ron Dennis that I wanted to retire at the end of the year, but he had persuaded me to term it a sabbatical instead, so as to give me the flexibility to change my mind later on if I wanted to. Ron was always so clever and so supportive like that – I owe him so much.

But, in my heart of hearts, perhaps I knew then, that evening, as the sun set on the Brickyard, that I had reached the end of the road. I had won at Indy, and it does not get much better than that.

I drove just one more grand prix, at Suzuka, two weeks later. I finished fourth: not bad, not good, but definitely not memorable. So my penultimate grand prix, Indy 2001, will always be my final flourish, perhaps even my finest hour. Why so? Because, working together alongside my dear old friends, the McLaren-Mercedes engineers and mechanics, we had triumphed over adversity, and over the old enemy, and that is always the very best kind of victory.

As that great American Martin Luther King Jnr famously said, “If you can’t fly, then run; if you can’t run, then walk; if you can’t walk, then crawl, but whatever you do you have to keep moving forward.” And we did that. Together. Thanks, guys. You rock.