It seems like only yesterday that we regularly watched Mika Häkkinen smiling awkwardly to the Finnish national anthem atop yet another Formula 1 podium.

But the Flying Finn’s recent birthday (September 28) and the arrival of the 21st anniversary (1 November) of his first world drivers’ championship are salutary reminders of the relentless march of time.

But can it really have been so long ago?

Mika won that 1998 world title in absolute style, beating arch-rival and Ferrari driver Michael Schumacher to the championship with victory in the Japanese GP at Suzuka – as much the most challenging and demanding circuit on the calendar back then as it is now. 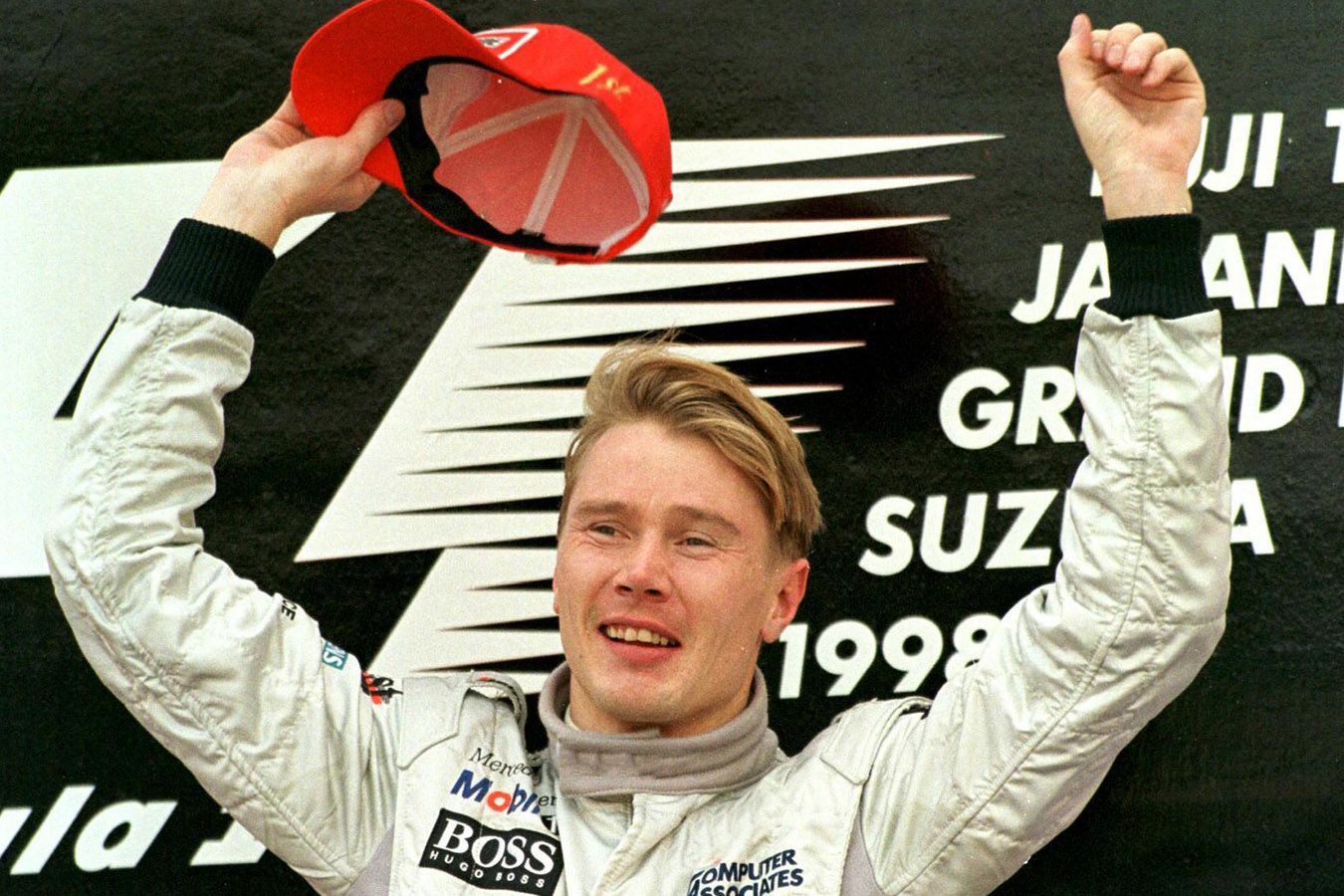 Mika’s title challenge had begun to gather momentum during 1997, when he showed great pace. For much of that summer, he was very much the bridesmaid and never the bride, as his sleek MP4-12 surged commandingly into the lead, only to stumble and fall as he hit reliability issue after reliability issue.

Finally, he scored his first victory in the season finale at Jerez, Spain.

It was a win achieved in slightly controversial circumstances. The McLaren’s had caught and passed the hobbling Williams of world champion-elect Jacques Villeneuve in the final laps; then David Coulthard was instructed over the radio to move over and let Mika win.

David, to his credit, didn’t question the instruction, and that win gave Mika the confidence and assurance to head into ’98 with that particular monkey now safely off his back.

Bizarrely, he duly won the opening race of the season in Melbourne, Australia in near-identical circumstances. He’d led the race until making a ‘phantom pit-stop’ due to a radio mix-up, and was again the beneficiary of Coulthard ceding position with a handful of laps remaining. 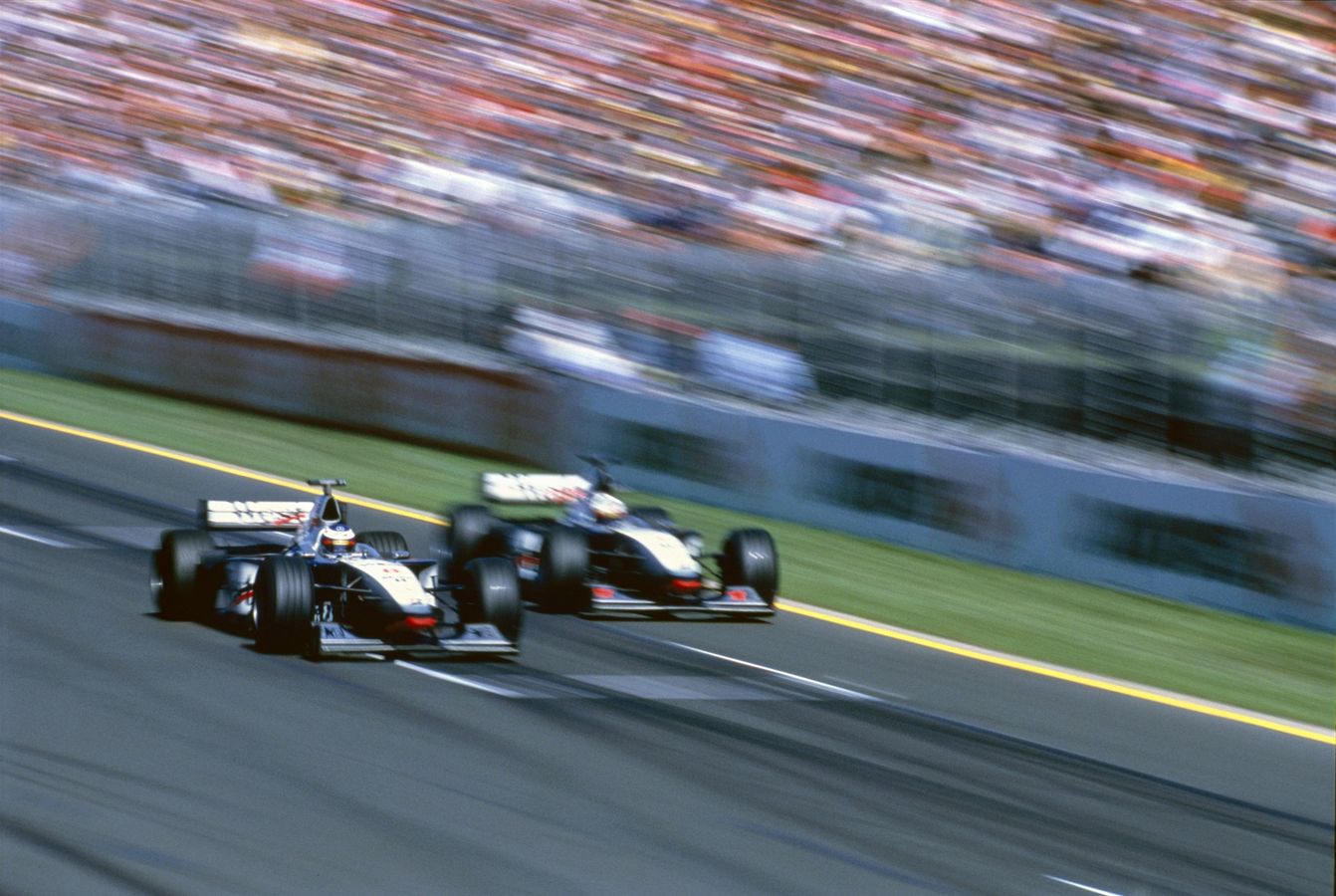 Armed with Adrian Newey’s beautiful and efficient MP4-13, Mika took three more wins in the first six races, in Brazil, Spain and Monaco. His team mate triumphed when he retired at Imola, but his main competition came from Schumacher, now in his third season at Ferrari and pursuing a first title for the red team with a growing impatience.

The season soon developed into a closely-fought contest between the pair as they traded wins, with Mika halting a strong mid-season charge by his rival with wins in Austria and Germany.

The penultimate race, the Luxembourg GP at the Nurburgring, saw Mika beat Schumacher in front of a frustrated German crowd. It was a pummeling, relentless drive from the Finn, giving him a crucial lead of 90 points to 86 as the pair headed for the far flung finale in Japan.

This was still the time of 9-6-4-3-2-1 scoring, and it meant that Mika could win the title by finishing second to his rival at the finale in Japan. Nevertheless, Mika and the team could take nothing for granted.

It was appropriate that the showdown took place at a venue which had already played such a big part in McLaren’s history – Ayrton Senna had won all three of his titles in Japan, and the venue still reverberates with McLaren-Honda mysticism. Mika, too, had loved the place since his first visit with Lotus back in 1991. 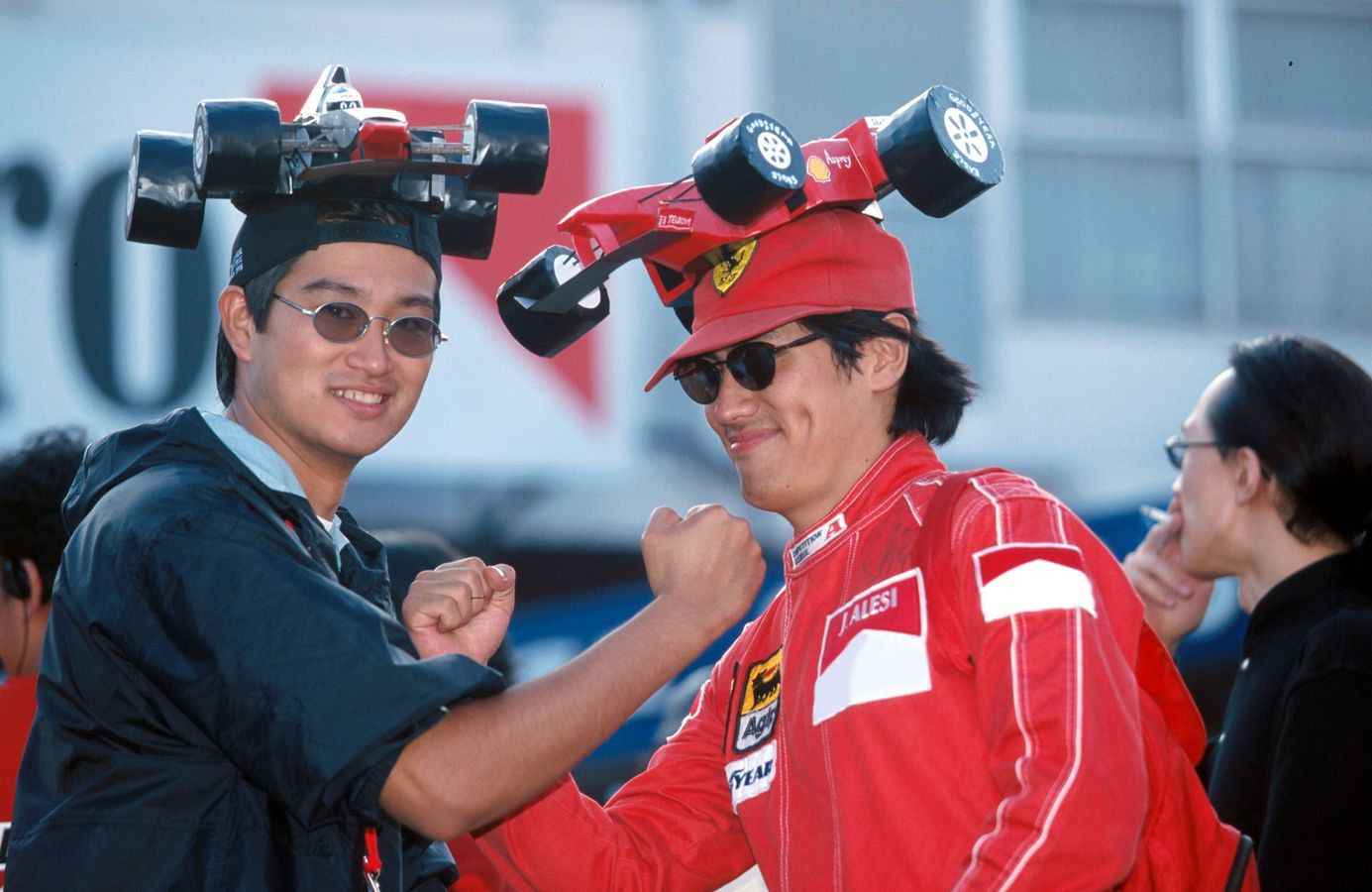 McLaren left nothing to chance in preparing for the finale, and when he arrived at Suzuka, Mika appreciated that support.

“It was a massive weekend,” he recalled. “That race I remember I really felt the power of a big team; what they could really do if they were really focussing with the full energy for the championship; focusing on one driver to win. My car was so perfect, whatever they did, they just made the car incredible, all the best parts, every little detail was so finalised by the team.

“When I arrived, I saw the car I said to the mechanics what is going on here? Everything was just perfect because they wanted also to create for my head the confidence that, ‘Mika, we are behind you, we are going to win together’. It was incredible to see that. A big team, if they want to do something like that, they can do it.”

Schumacher piled on the pressure by taking pole, while Mika was second and alongside after a slight mistake on his final lap.

The race was to be turned upside down at the start. At the first attempt, Jarno Trulli stalled his Prost, which prompted a second formation lap. As the field prepared for the second attempt, Schumacher stalled – a result of him dropping the revs too low on the formation lap as he tried to control temperatures.

There was another abort, and, as per the rules, the German was obliged to go to the back of the grid, changing the complexion of the title battle. However, Mika still had worries of his own as he prepared for a third formation lap. 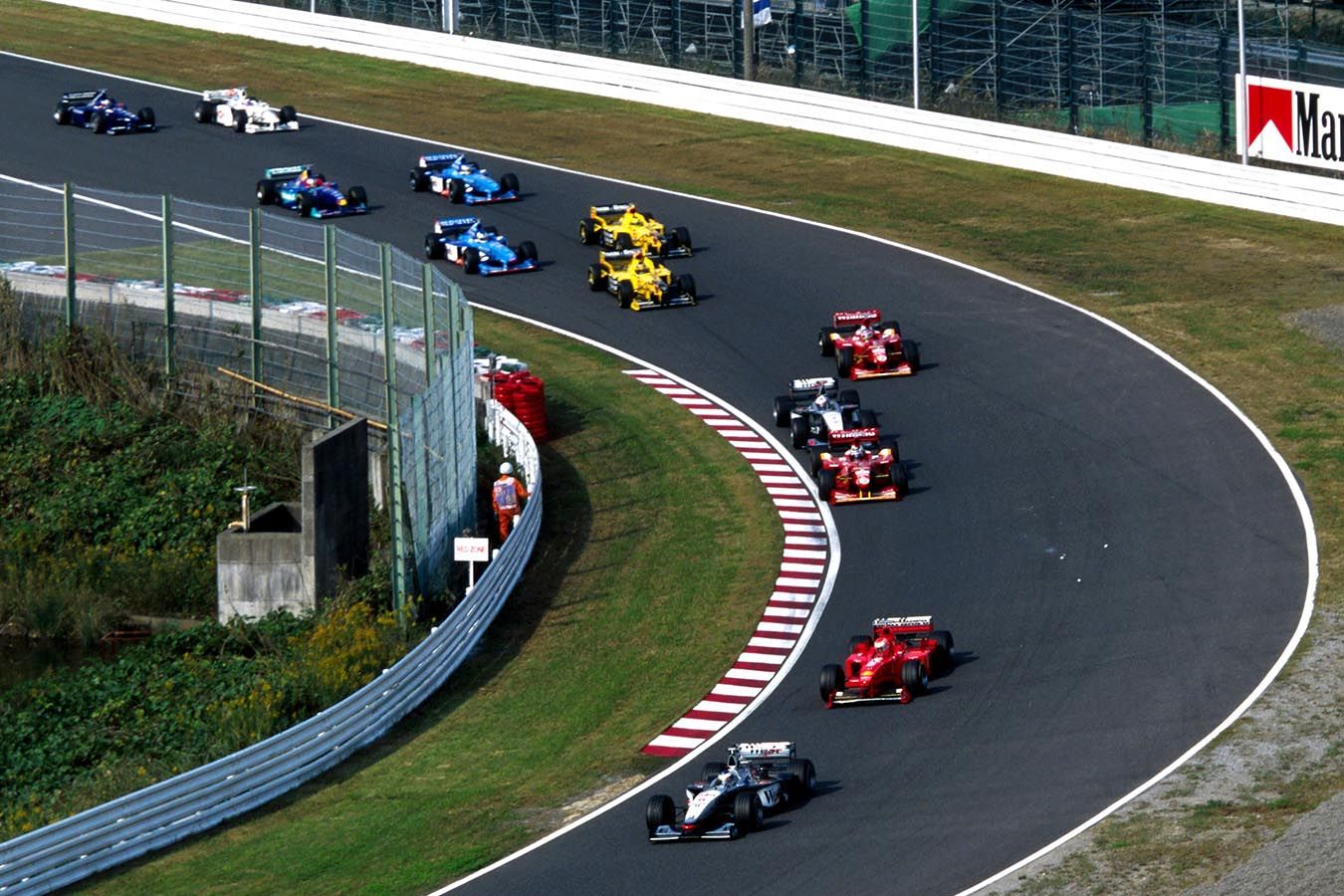 “Then Michael had a problem, and it took a little bit of the pressure off, and I was able then to put the temperature down in the car, and I was able to make a start in the proper way and take the lead.”

From the back, Schumacher quickly made progress, getting up to seventh by lap five, and third by lap 22, with only his team-mate Eddie Irvine between himself and Mika. There was no margin for error for the leader. And then as he passed the pits to start lap 32, Schumacher suffered a puncture, possibly as a result of running over debris – and he was out of the race.

Informed of the news, Mika now knew he was world champion.

But he still had a race to complete, and he couldn’t afford any lapses in the closing laps.

“Of course, I was looking at every marshal for information, was there oil or sand on the track, were there any incidents? I was really trying to not hit the kerbs too hard, or put stress on the engine. 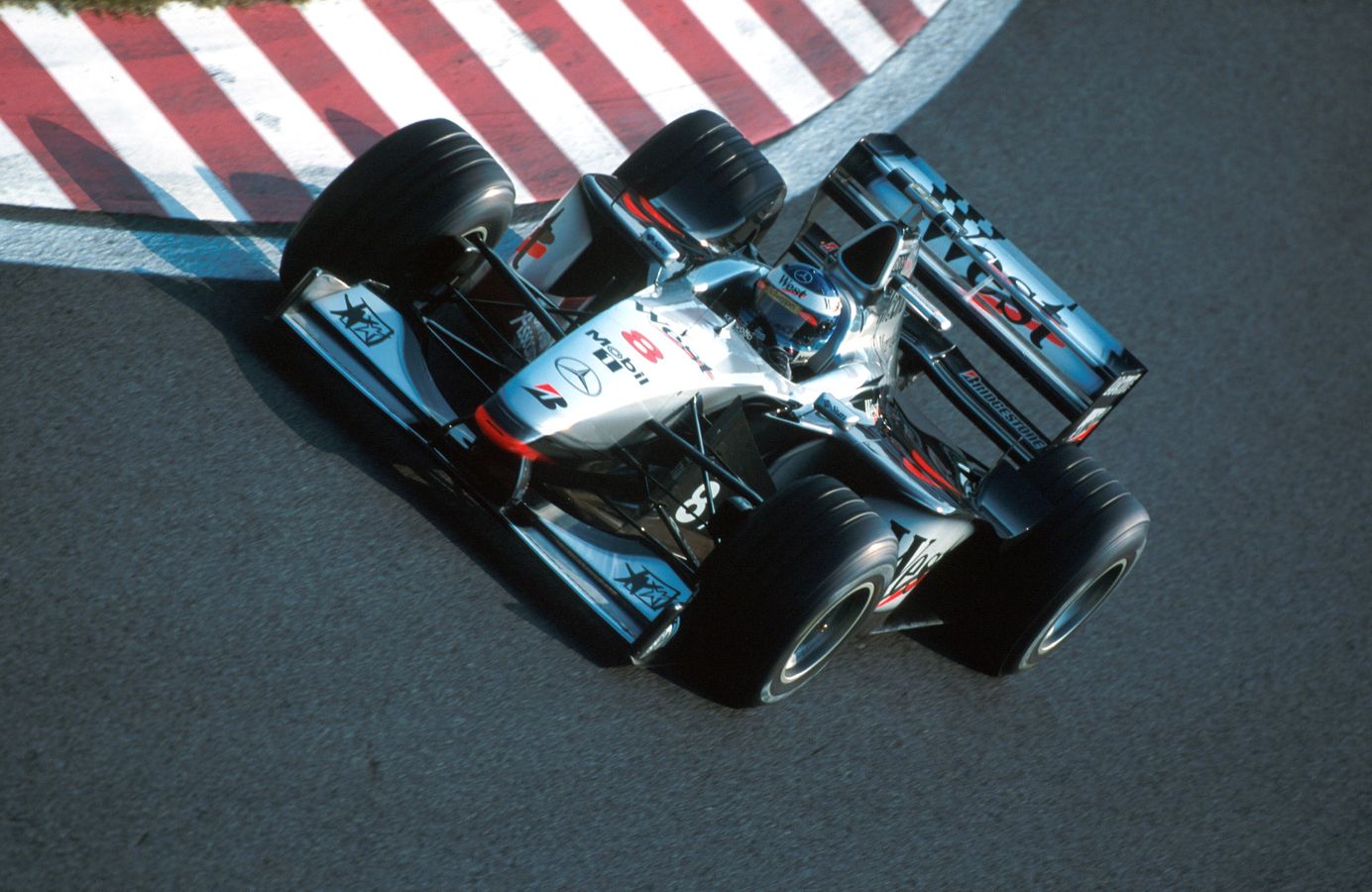 “But a couple of laps before the end, of course my mind started going in the direction, ‘I’m going to be a winner’, and the team straight away recognised that and they did call on the radio and said, ‘Mika keep focusing and keep pushing, it’s not over yet. It’s not over until you cross the finish line.’

“It’s an amazing feeling, you get the lead, and before that you feel quite nervous and confident inside, but when you get the lead, you just feel confident, you don’t feel nervous any more. And when everything has gone as you have planned, then the job is half done. It was a good feeling, a really great feeling.”

Mika duly crossed the line to secure his eighth victory of the season. The first man to greet and congratulate him in parc ferme was Schumacher.

Winning the race was the perfect way to win a world title, and he would repeat the feat at the same venue a year later: “Yeah definitely, I loved it, every second. But I would not want to do it again, no way, my heart couldn’t take it any more!”