Selecting a handful of Jenson’s best races for McLaren would be easy. Naturally, you’d include that last-gasp victory in Canada in 2011 – the win that will probably go down as his greatest ever; and his peerless win at Spa a year later. But, to celebrate his 100th McLaren start – which took place at the 2015 Spanish Grand Prix – we wanted to cast our eye back over not merely the great and the good, but the odd, the unusual and the just plain forgotten grands prix.

So sit back, relax and take in a snapshot of a McLaren legend’s 100 races for the marque… 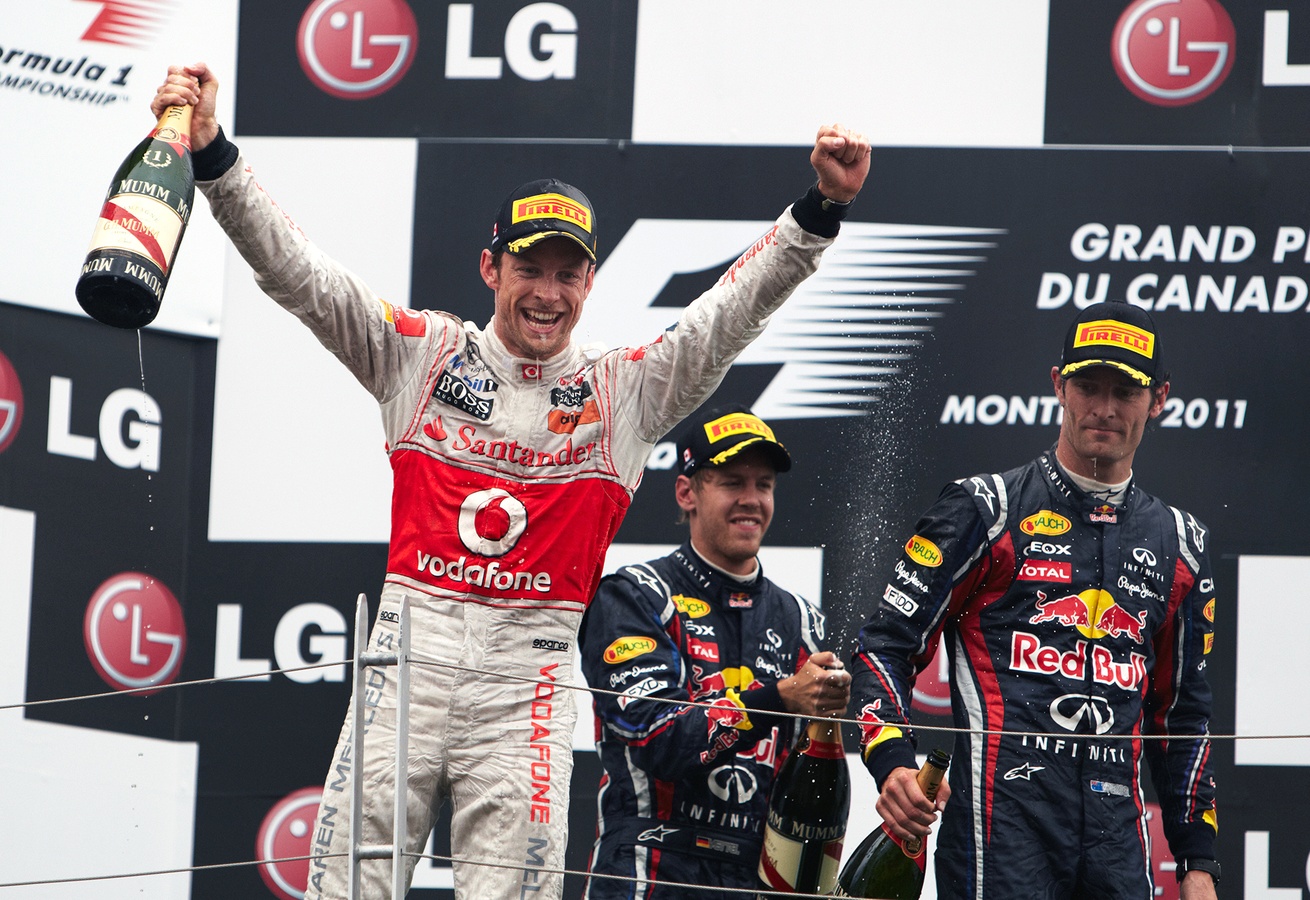 Okay, we just couldn’t leave this one out. During the mid-race stoppage, few would have believed Jenson could charge back to win this one. Let’s quickly recap on that frantic afternoon: collided with Hamilton, collided with Alonso, ran at the very back, extra pitstop to change the nosebox, drive-through penalty for speeding behind the Safety Car, and victory on the very last lap. Indisputably, the race of his whole life. 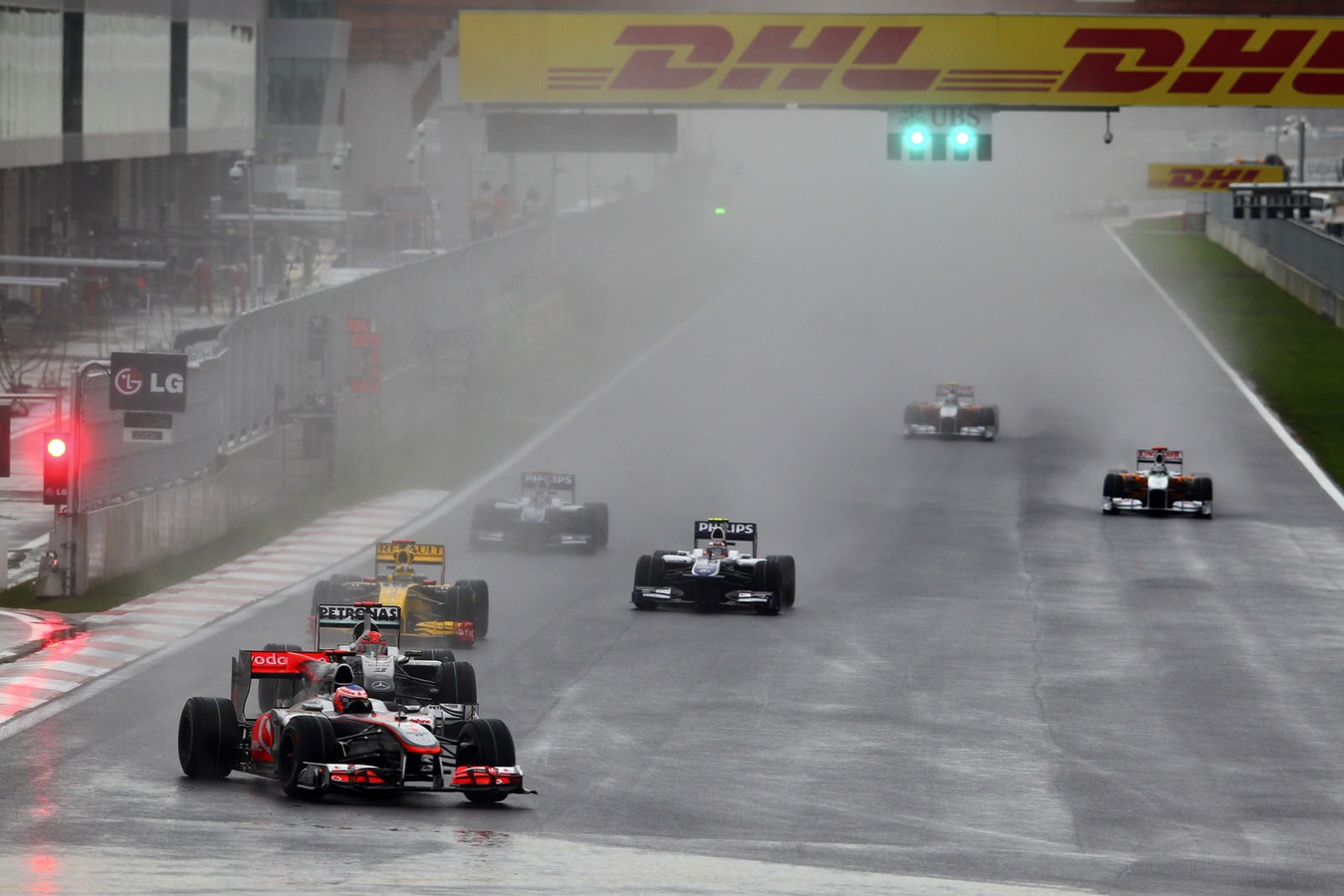 An arguable case for Jenson’s most disappointing weekend in a McLaren? Probably. JB has publicly admitted that he never got on with the Korean track, and his race there on a wet weekend in 2010 was memorable for all the wrong reasons. He started seventh, suffered a spin in the race, and ultimately finished 12th. Sometimes it just doesn’t come together… 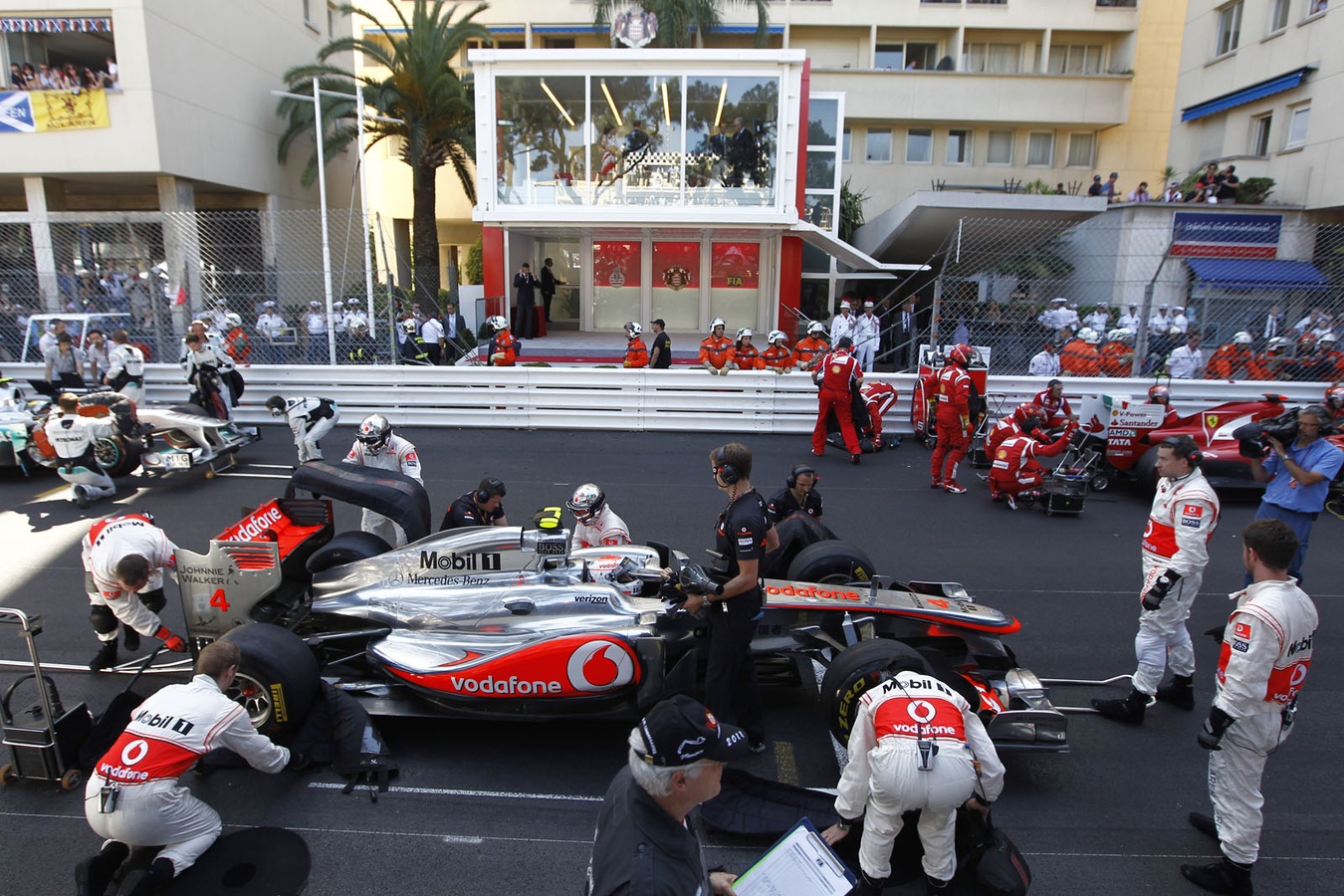 Jenson still considers this as the one that got away. Starting from second, he moved into the lead when Red Bull botched Sebastian Vettel’s first pitstop, but was knocked back to third during the rough and tumble of a typically ragged street race. On fresher rubber, he looked set to pounce for the lead in the dying laps, but then a red-flag, and the opportunity for all cars to fit new tyres, meant the opportunity came to nought. Bitterly disappointing.

A great move on a bullishly defensive Schuey 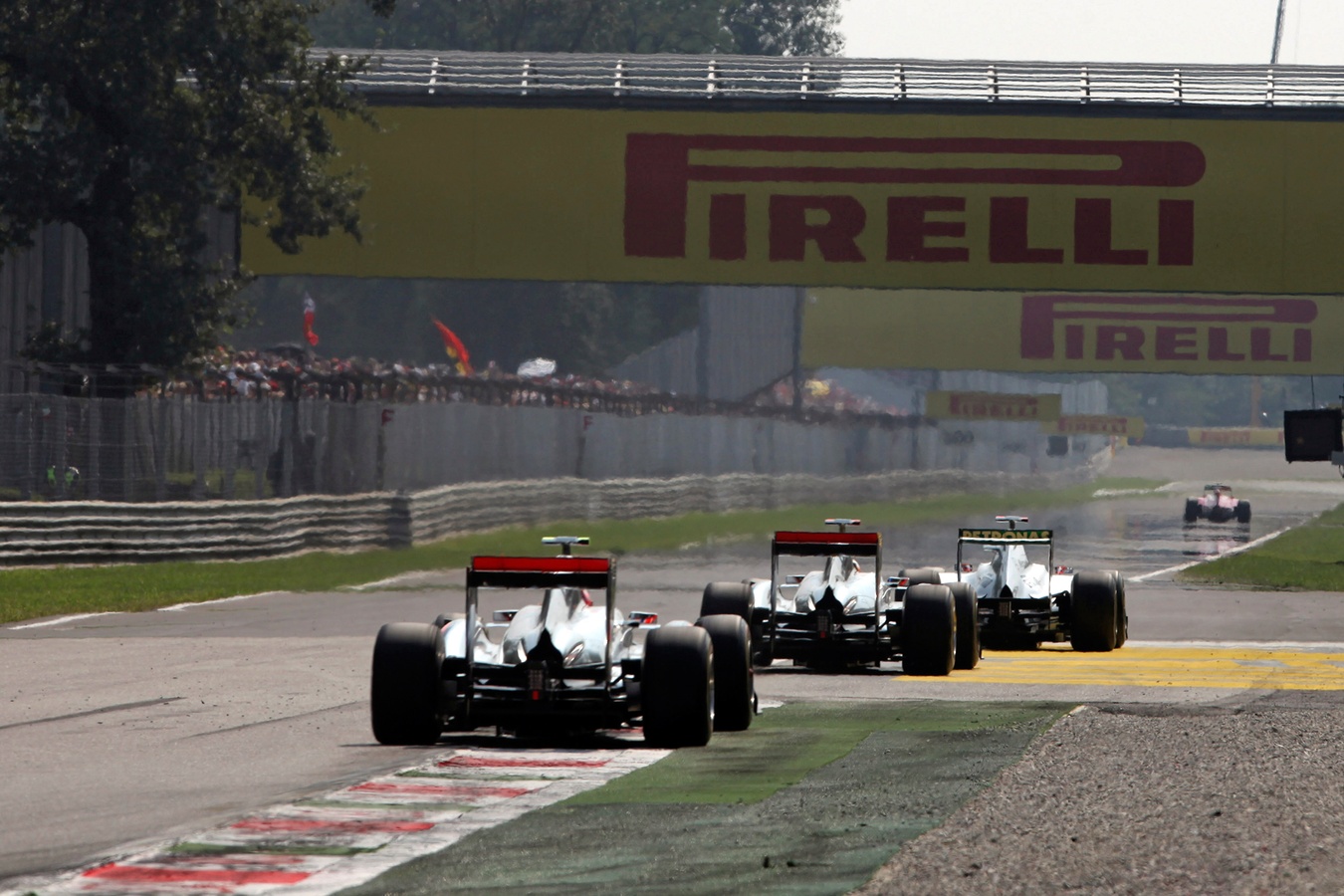 Lewis spent 11 laps tucked beneath the German’s rear wing, looking for a way past as the German defended with typical robustness. Lewis seemed cowed, but Jenson was undeterred, pulling off a pair of brilliantly judged moves to move past them both in a single lap. It was a commanding performance, and helped him on his way to second position in the race. 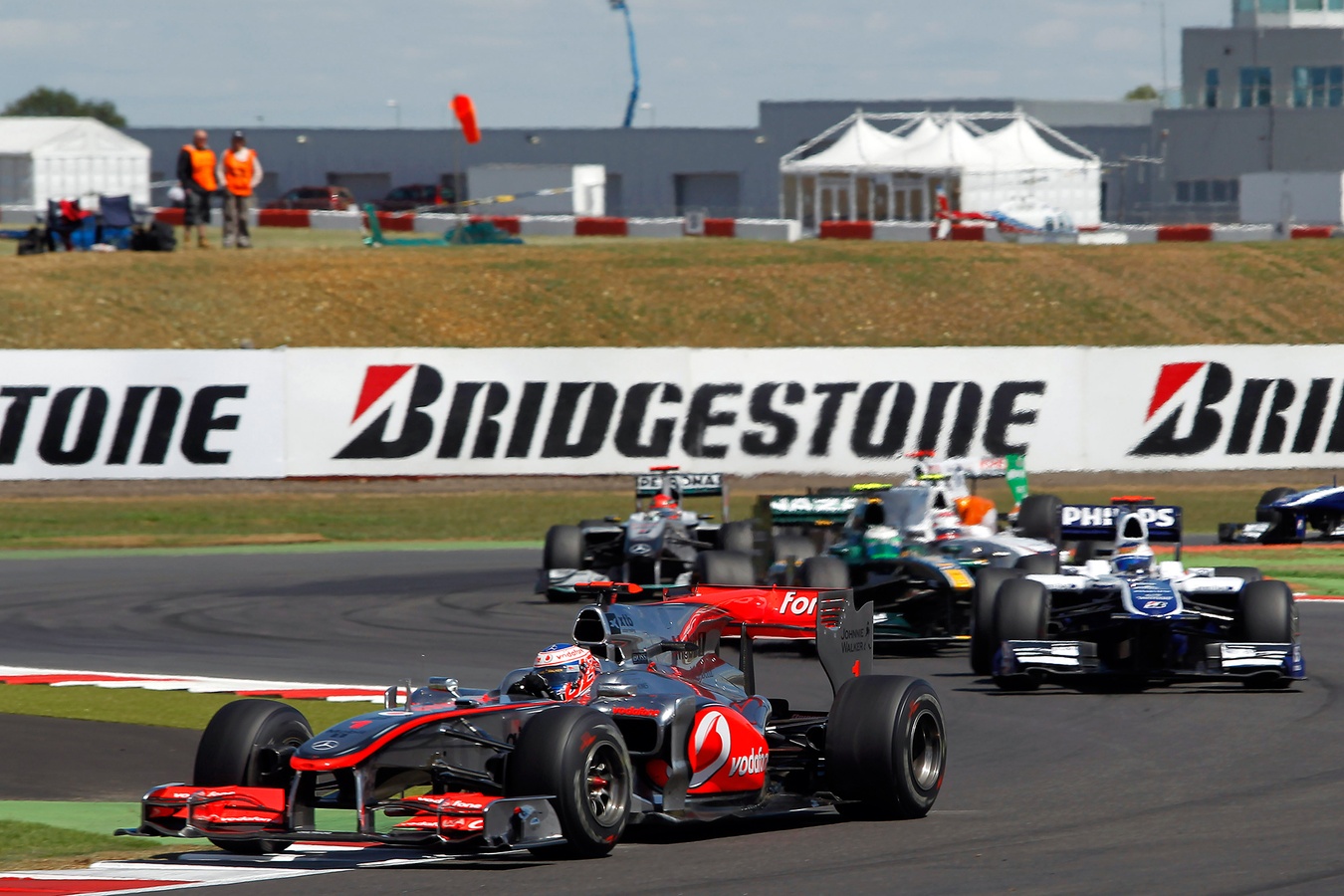 When he qualified 14th, it looked like another British Grand Prix – the race where either a victory or a podium has always eluded him – for Jenson to forget. But armed with the mighty MP4-25, Jenson got the bit between his teeth and drove a forceful race, overtaking 10 cars to just miss out on that long-elusive Silverstone podium. And on a track where it’s allegedly hard to pass, too… 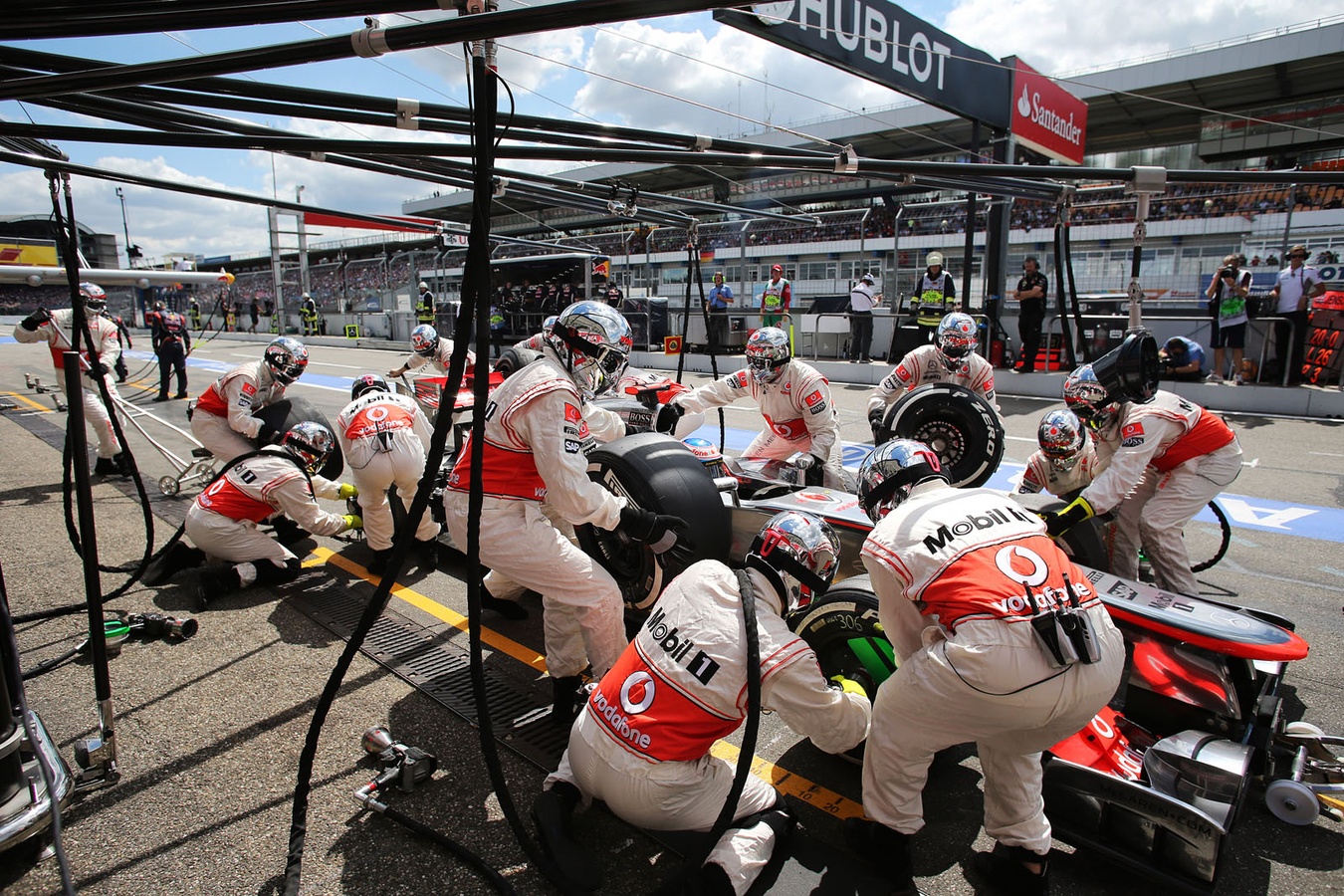 Starting sixth, it didn’t look like this would be a particularly worthwhile Sunday afternoon, but Jenson was really dialed into the car, overtaking several cars to run second. Memorably, his 2.31s pitstop not only enabled him to vault Vettel, but also established a new record for the fastest-ever stop (although it was beaten a couple of years later). This was the performance that kickstarted the team’s second-half revival in 2012. 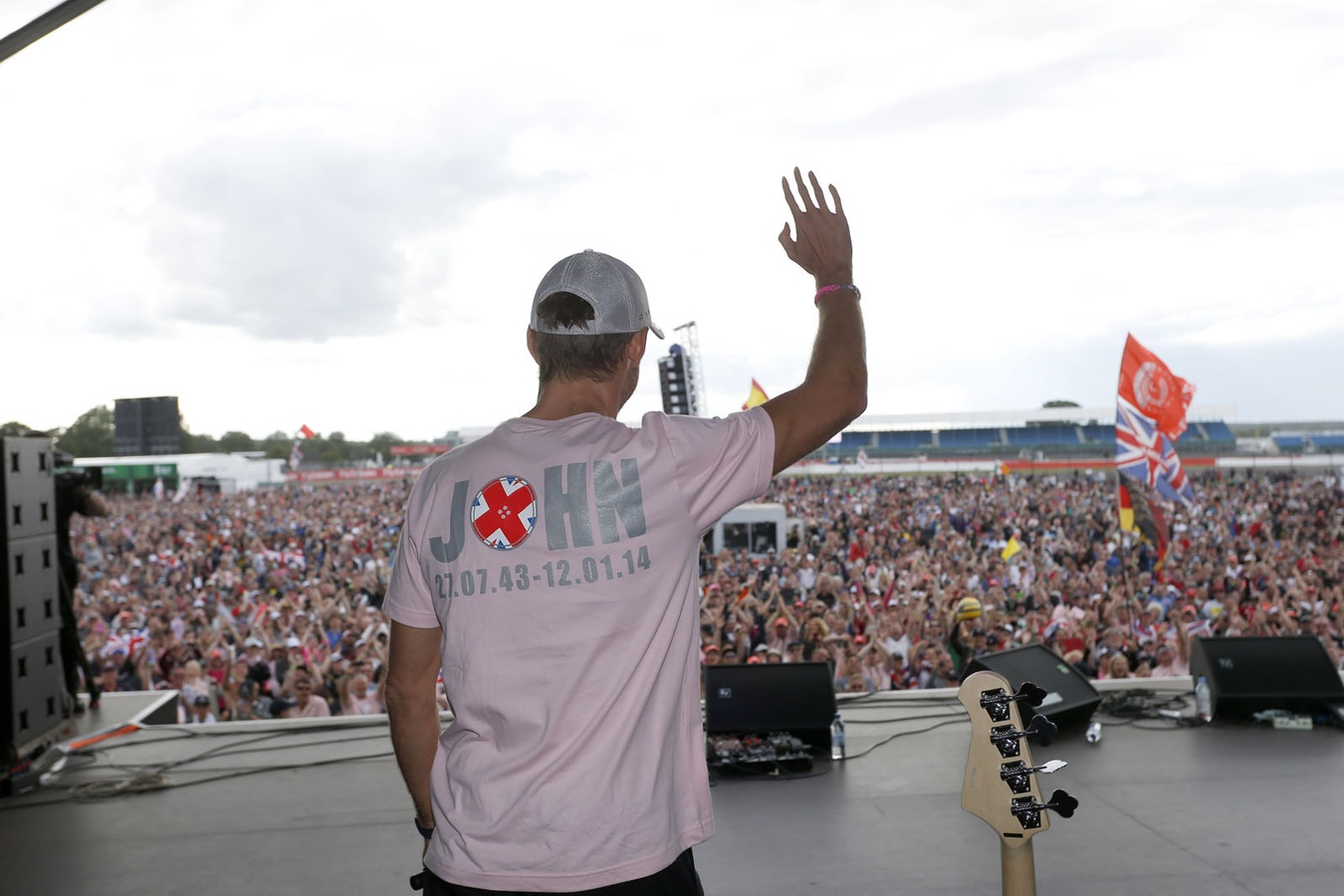 An emotional weekend for Jenson, as the whole team and thousands of fans donned #PinkForPapa T-shirts in memory of his late father, John. In the race itself, and armed with the uncompetitive MP4-29, Jenson drove aggressively, only missing out on a podium by 0.9s after chasing Red Bull’s Daniel Ricciardo all the way to the flag. 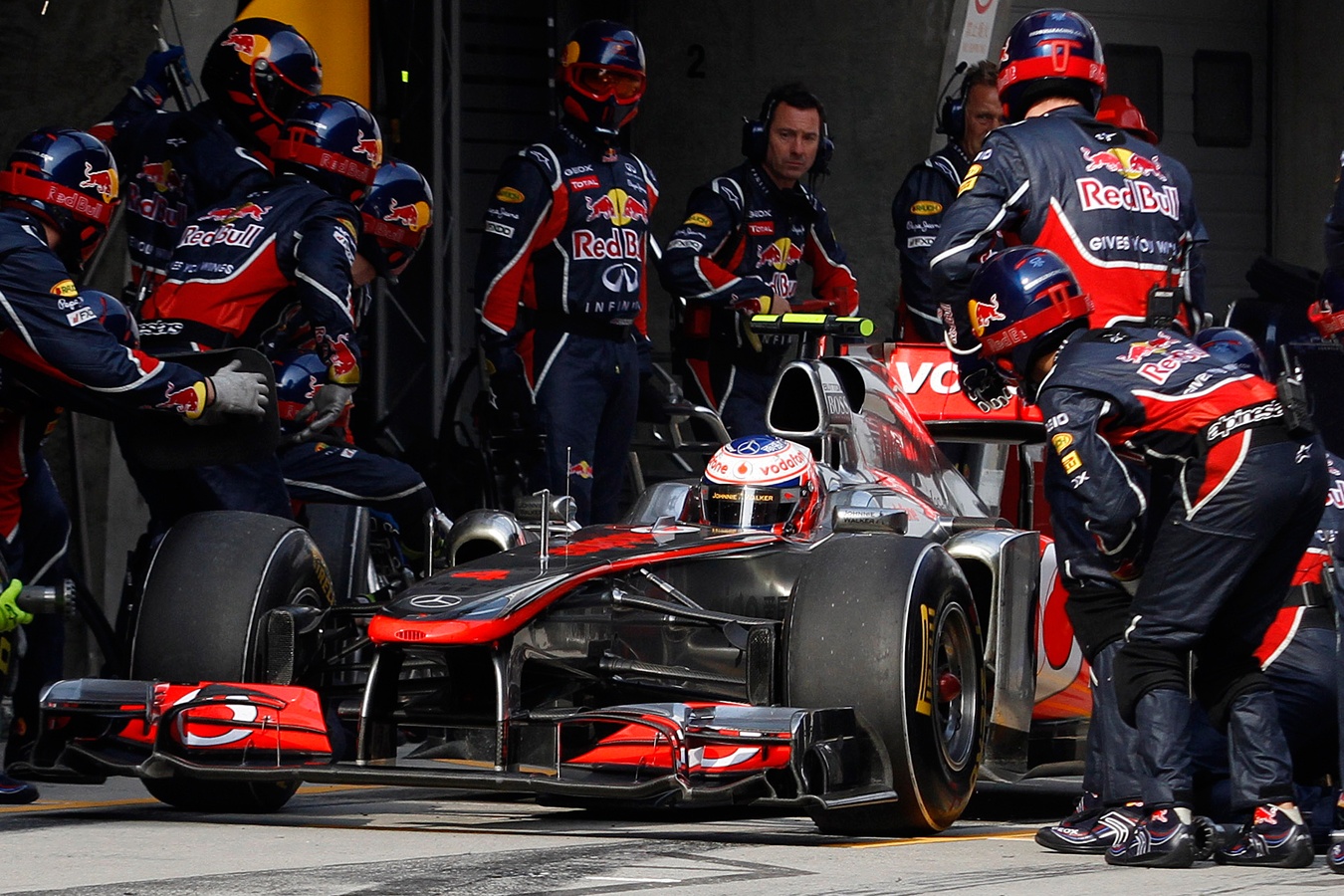 We all make mistakes, but most of us don’t suffer the embarrassment of making them in front of hundreds of millions of people. Such was the case in Shanghai in 2011, when Jenson peeled into the wide, concrete pitlane, briefly looked down to adjust a switch on the steering wheel and found himself rolling perfectly into the pitbox of… Red Bull Racing team! What did that feel like? “A bit embarrassing,” he later sheepishly admitted. 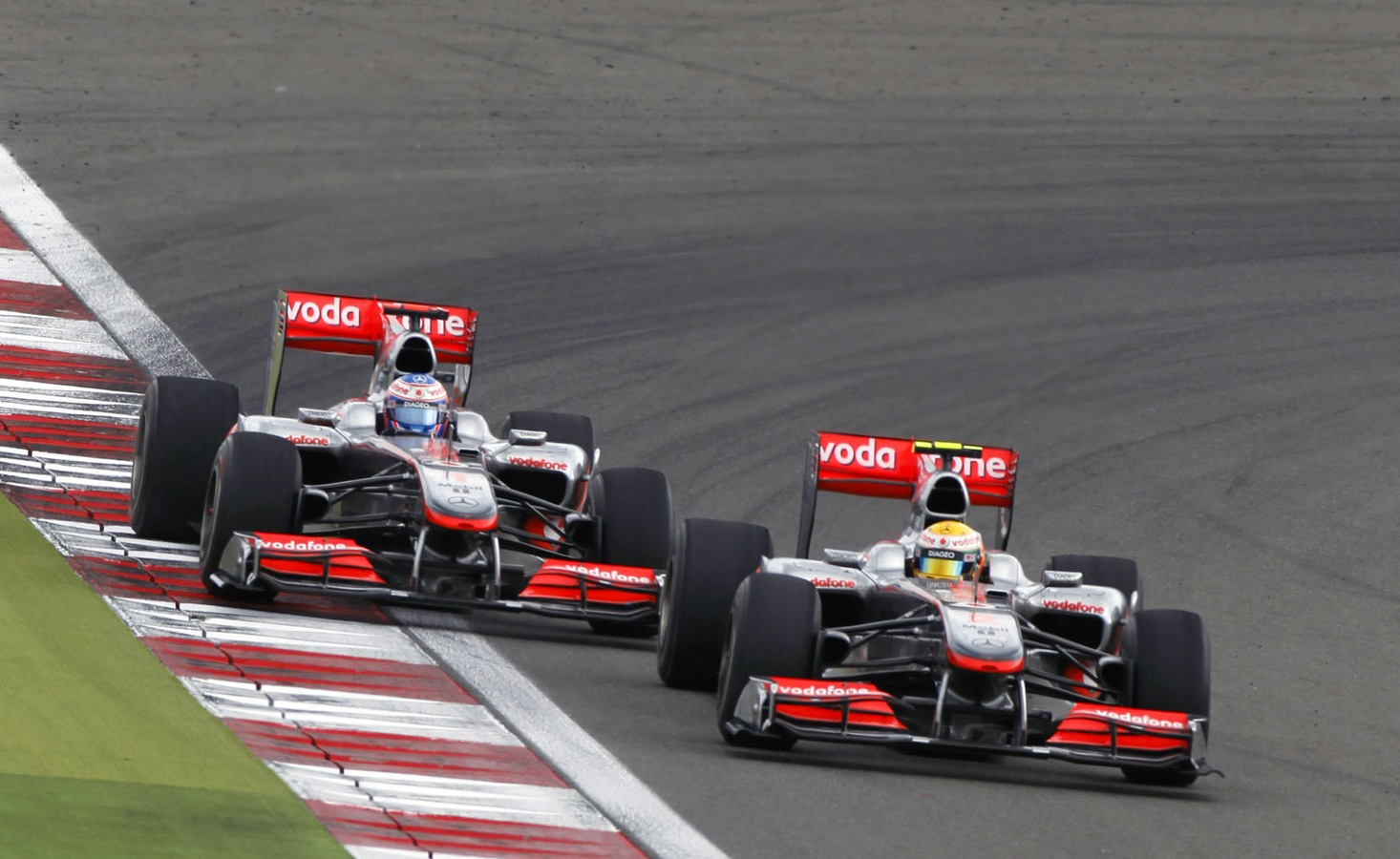 The race that saw both Red Bulls collide spectacularly, then Jenson fiercely take the race to team-mate Lewis. If the stakes were high on the racetrack, that was nothing compared to the pitwall, where the blood pressure of the engineers was rapidly rising as they struggled to get both cars to the finish with enough fuel. Sanity prevailed, the drivers fell into line and Jenson took a brilliant runner-up spot behind Lewis. 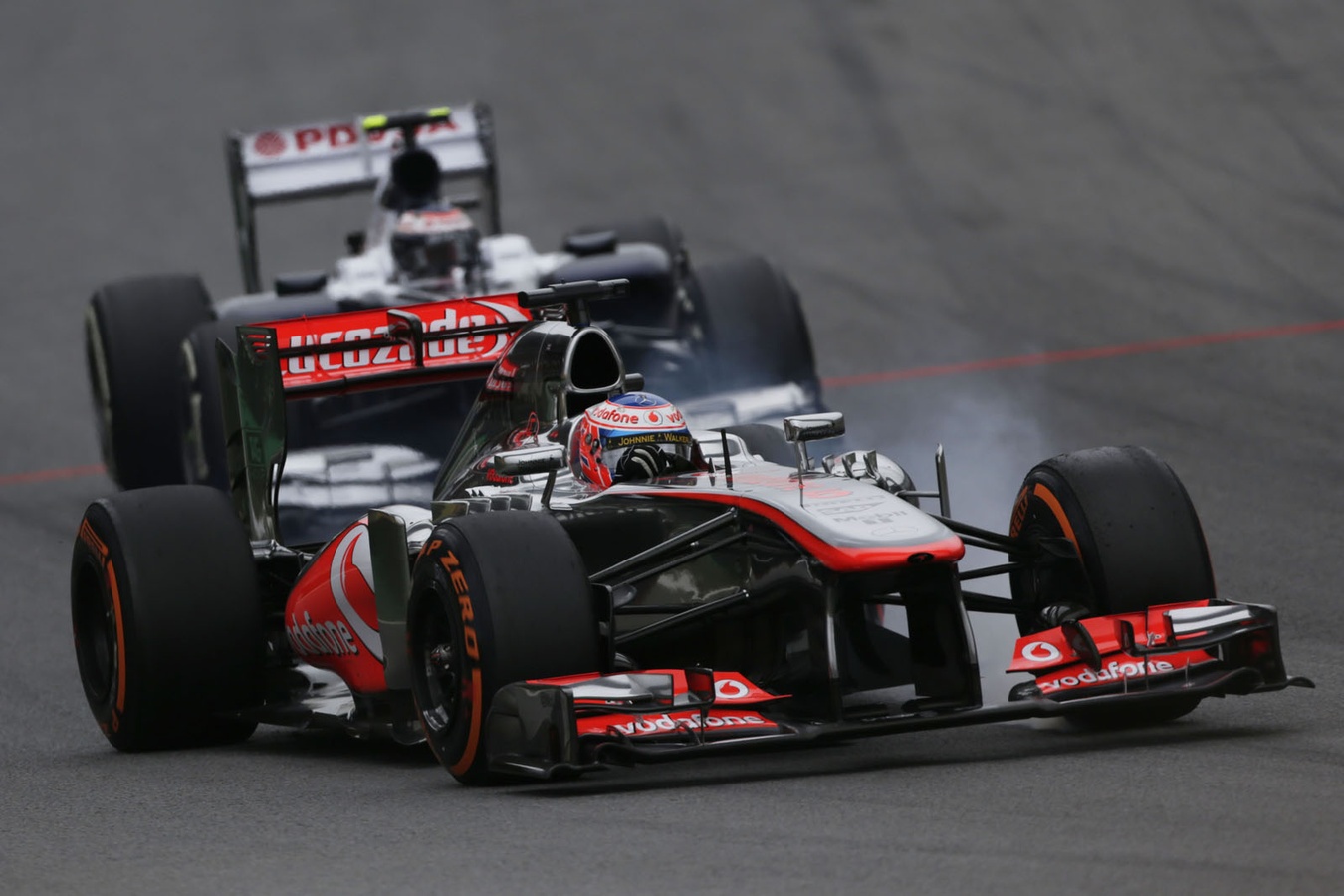 The MP4-28’s swansong, and the closest it came all year to scoring a podium. After the Brazilian rains washed out the whole of Friday and Saturday, the level playing field established due to the lack of running, and the opportunity to race on a dry, ‘green’ track played into the team’s hands. Jenson drove superbly, never putting a wheel wrong, and finally finished fourth. It was so good, he’d do exactly the same thing a year later too!