RUSH – behind the scenes set report

Formula 1 in the 1970s – is there a more evocative era in motorsport?

It was the decade that had it all, and then piled on more, crimped it, frizzed it, flared it and painted it orange. And brown. Then added platforms.

Formula 1 didn’t escape the ‘decade that style forgot’: in the ’70s, grand prix cars were neither as sleek and svelte as their 1960s’ predecessors, nor as angular and purposeful as the fastest turbo cars of the 1980s.

No, they looked like plastic Airfix kits that had melted in front of a two-bar fire. Some of the most unique, odd and just plain ugly cars existed in the 1970s. Want proof? Check out March’s unloved 711, which looked like somebody had bolted a surfboard onto a submarine before adding wheels; or the Ligier JS5 – a car endearingly labeled ‘the teapot’, and which had more than a passing resemblance to a piece of Delft pottery.

That inimitable ’70s style was everywhere in the F1 paddock, too: racing drivers sported lank hair, floppy flat-caps and over-sized shades, women dressed in long flares and toting stopwatches, even the mechanics looked like they could all have played bass in The Sweet.

Yeah (man), everywhere you looked at Blackbushe airport, the 1970s were alive and well.

Admittedly, it’s neither Montjuich nor Monaco. But, somehow, today, on this chilly May morning in 2012, this unassuming Surrey airstrip (which, adding to the mundanity, also hosts a popular Sunday market) IS the Nurburgring Nordschleife.

If you’ve read this far, you probably know why mclaren.com is here: Blackbushe was the main unit location for Ron Howard’s Rush movie, which tells the tale of the searing rivalry between Ferrari’s Niki Lauda and McLaren’s own James Hunt – the British playboy racer who captured the heart of a nation in ’76 when he defied the odds to take the title fight to the Austrian superstar.

It’s an epic tale, and – for all of us who feel that our fortnightly two-hour grand prix fix is as edge-of-the-seat thrilling as any Hollywood blockbuster – justly deserving of a big-screen makeover.

We arrive early, and shooting is already underway: the skyline is dominated by a huge overhead lighting rig, rising 100 feet in the air, which bathes the set in light. On a disused Blackbushe runway, a semi-permanent pit building has been erected, complete with banners, toolkits, jacks and Armco barriers. The Tarmac itself is home to 20 immaculate F1 cars – all period-accurate and looking exactly like a freshly snapped Polaroid from back in the day.

This is weirdly surreal.

As we walk deeper onto the set, that feeling of immersion into the 1970s deepens; it’s a sharp throwback to my childhood in the ’70s, all tight polyester T-shirts, blooming flared trousers, cheesecloth shirts, stack heels and ringing electric guitar solos.

Let’s do the timewarp again.

Suddenly, the illusion is shattered – there’s director Ron Howard himself. He’s clearly been in England too long – dressed more like a trawlerman, covered head to toe in layers of bright blue waterproof clothing and wearing his trademark baseball cap. He’s everywhere, keenly checking a shot on hi-def monitors, shouting instructions to cameramen perched atop cranes, discussing shot lists with Lee, his first assistant director. I first see him crouching behind a camera to prepare the next set-up.

Today, they’re busily shooting a series of startline sequences, and also the pivotal pitlane action, which – as in real-life – prompted a hectic flurry of tyre-changes that would define the outcome of that fateful German race.

Like all Hollywood directors, Howard is a supreme multi-tasker, pulling together a thousand different compromises as he settles on his next shot.

"Just you wait until you see it with all the set extensions – it’s going to look amazing," he adds, referring to the incredible job done in post-production to add the CGI depth and detail that’s physically – or financially – impossible to capture on celluloid.

Indeed, later that afternoon, we get to see the first-ever CGI shot brought to near-completion. It’s a crane shot tilting down onto the Nurburgring grid, and it looks incredible. It’s also an odd sensation to see what’s in front of you re-rendered to look even more ‘real’.

Like any movie operation, the Blackbushe set has its physical limitations – it’s merely a startline, a set of garages and a grandstand that’s oddly filled with inflatable dummies dressed in ’70s garb. On-screen, however, that half-empty grandstand has been replaced with a sea of thousands of fans, all cheering and standing beneath the shadow of the mighty old Nordschleife main tribune. The grid disappears far into the distance, CGI cars filling in for the absent backmarkers, and the old track snakes into the greyness of the horizon, where it meets even more distant CGI hills and forests.

It’s uncannily accurate, and symbolic of the care and attention that’s been brought to bear on the whole production.

Back in the ‘real’ world, the startline of the Nurburgring is freshly doused with water to accurately replicate the damp but drying start of the ’76 race. Equally, in the pitlane, a man sprays the Tarmac with a hose attached to a fire truck that crawls slowly up the road.

Job done – it looks like a dank German afternoon after a fresh rainshower.

Hundreds of extras are instructed to congregate along the startline and pitwall – it’s a sea of polyester, crushed velvet, stack-heels and oversize sunglasses. Everywhere you look, there are flares.

A huge gantry crane arcs over the track and, behind the camera, an army of technicians – all uniformly clad in black North Face waterproofs – busy themselves with final preparations before the cameras roll.

Hunt’s M23 motors into position – it’s stripped of its nosecone, with two rearward-facing cameras bolted to the front. Inside sits James. Or an eery facsimile. It’s hard to decide.

"We’re ready to start now, ladies and gentlemen!" comes the shout over the assembled chatter.

The cameras turn over. The cars turn over. The noise of the massed Cosworths rises from a burr to a collective crescendo. There’s another instruction, this time faster and more intense:

Suddenly, the world comes alive. Grid girls walk from the grid carrying huge placards; a bearded man in a bad brown polyester suit crabs across the startline frantically waving a ’30 SEK’ board. He dives behind the pitwall.

The revs gather to a scream, the national flag of Germany drops and the cars pull away.

Immediately, your racer’s instinct kicks in – it’s Pavlovian – and you’re watching for those telltale first signs during a grand prix start: who’s made a poor getaway, who’s sprung from the blocks and is already jostling for position, who’ll sneak into the lead at the first corner.

Instead, the entire grid motors serenely off-camera and peels off out of sight, complets a quick u-turn and reappears around the back of the pit garages where they re-assemble on the grid once again. It’s vaguely disappointing.

When ‘Cut!’ is called, the extras quickly reach for their iPhones, click open lighters and pull on modern puffa jackets to ward off the bite of the springtime cold.

For somebody unused to the whole movie-making process, it’s a strange, incredible, unbelievable sight. For the regulars, it’s somewhat more routine. Rob Harris, the unit PR turns to me, and with a relaxed smile assures me, “Steve, there’s nothing you’re missing that you won’t see again and again for the rest of the whole day – that’s how movies get made…”

Indeed, that startline action is repeated almost incessantly for the rest of the morning – with different set-ups and camera angles to suitably capture all the action. And, as the unit breaks for lunch, Ron is still busy – he’s handed a plate of food covered in silver foil and sits down on the tyre of Hunt’s M23, mirrored by his assistant director on Lauda’s 312T. They busily confer, passing notes on the morning’s progress and prepping for the rest of the day.

As the morning rolls into afternoon, the sun breaks through the cloud. And, as I prepare to leave, there’s another call over the PA system, “Okay, we’re breaking down Germany and moving on to the start of Brazil.”

Cars are rolled back and forth along the grid, German-centric banners are pulled from the Armco and re-strung with smiley bright Brazilian logos. Quickly, the Nurburgring morphs into Interlagos, and the whole thing starts anew.

Rush had its world premiere in London’s Leicester Square on Monday September 2 – the very same day as McLaren’s 50th anniversary. It’s a fantastically told tale of not only the rivalry between James and Niki, but of the fire and passions that drive people to their mental and physical limits. Ron Howard has constructed a vivid, visceral and compelling account of one of Formula 1’s greatest chapters, and he’s totally nailed it.

Whether you’re a die-hard Formula 1 fanatic, a McLaren aficionado, or simply a fan of the movies, Rush is, quite simply, magnificent, and a worthy testament to the stories of James and Niki, and Formula 1 as a whole. 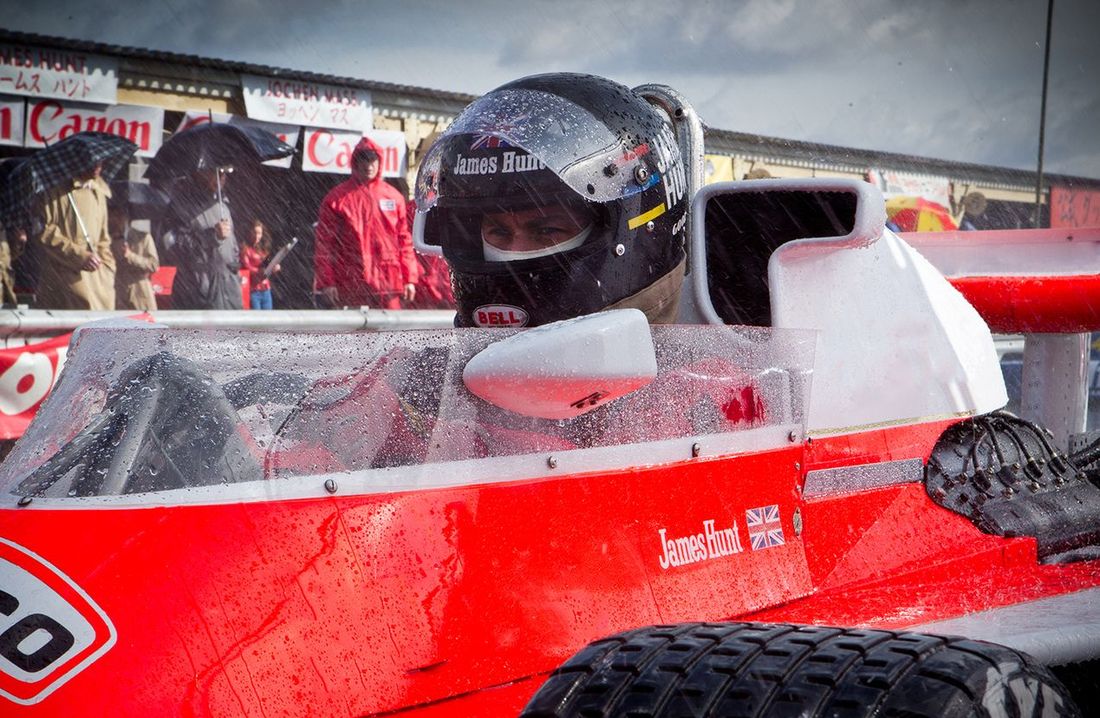