Forty years ago this month Brands Hatch hosted one of the most dramatic races in the long history of the British GP. It was to be one of the key moments of a remarkable season that saw James Hunt and McLaren take on and eventually beat Niki Lauda and Ferrari, a contest now immortalised in Rush by director Ron Howard.

But what of the first part of that ‘76 season, and the races that laid the foundation for what was to come? 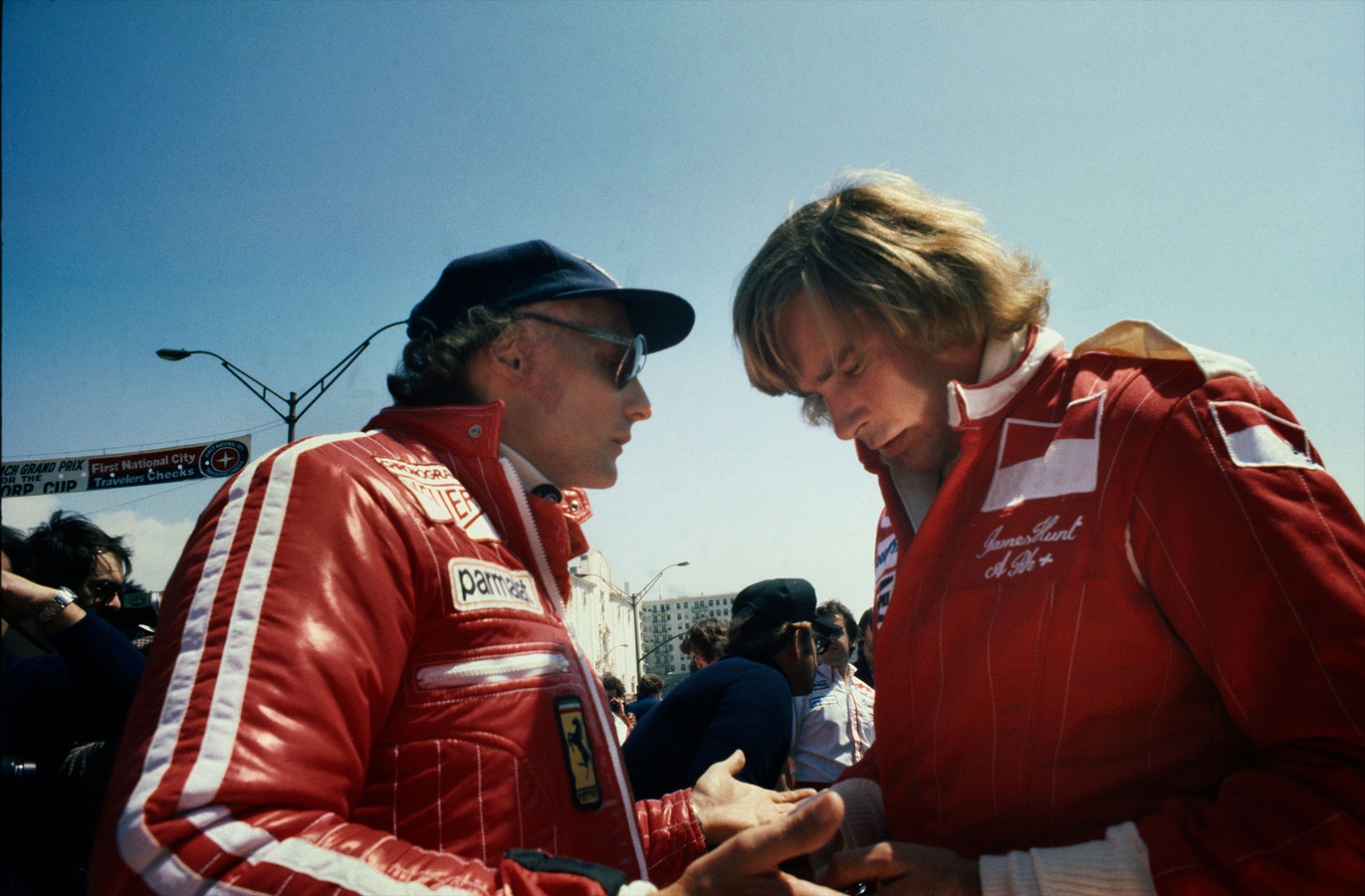 The story started at the end of the previous year, when Emerson Fittipaldi made a late decision to quit McLaren and drive for his brother’s Copersucar team. Few suitably qualified drivers were on the market, but one who was available was Hunt, left in the lurch by the demise of Hesketh.

The Englishman had enjoyed a chequered career, but he was now a proven Grand Prix winner, having triumphed at Zandvoort that August. There were still a few question marks over his ultimate potential, but for McLaren boss Teddy Mayer and his sponsor Marlboro, Hunt was the obvious man for the job. However, no one could have predicted what an impact he would make from the start of the new season, and few expected that he would so quickly seize the initiative and dominate experienced team mate Jochen Mass, a fixture at McLaren since late ‘74.

Even James himself had doubts, as he admitted in his book about the season, Against All Odds: “The most important thing in life is to know your limitations. While I felt confident that I could do the job I am trying to do – by which I mean to be the best – I hadn’t done it then, so I had no right to feel that I could. And at that level you can only hope that you are right.” 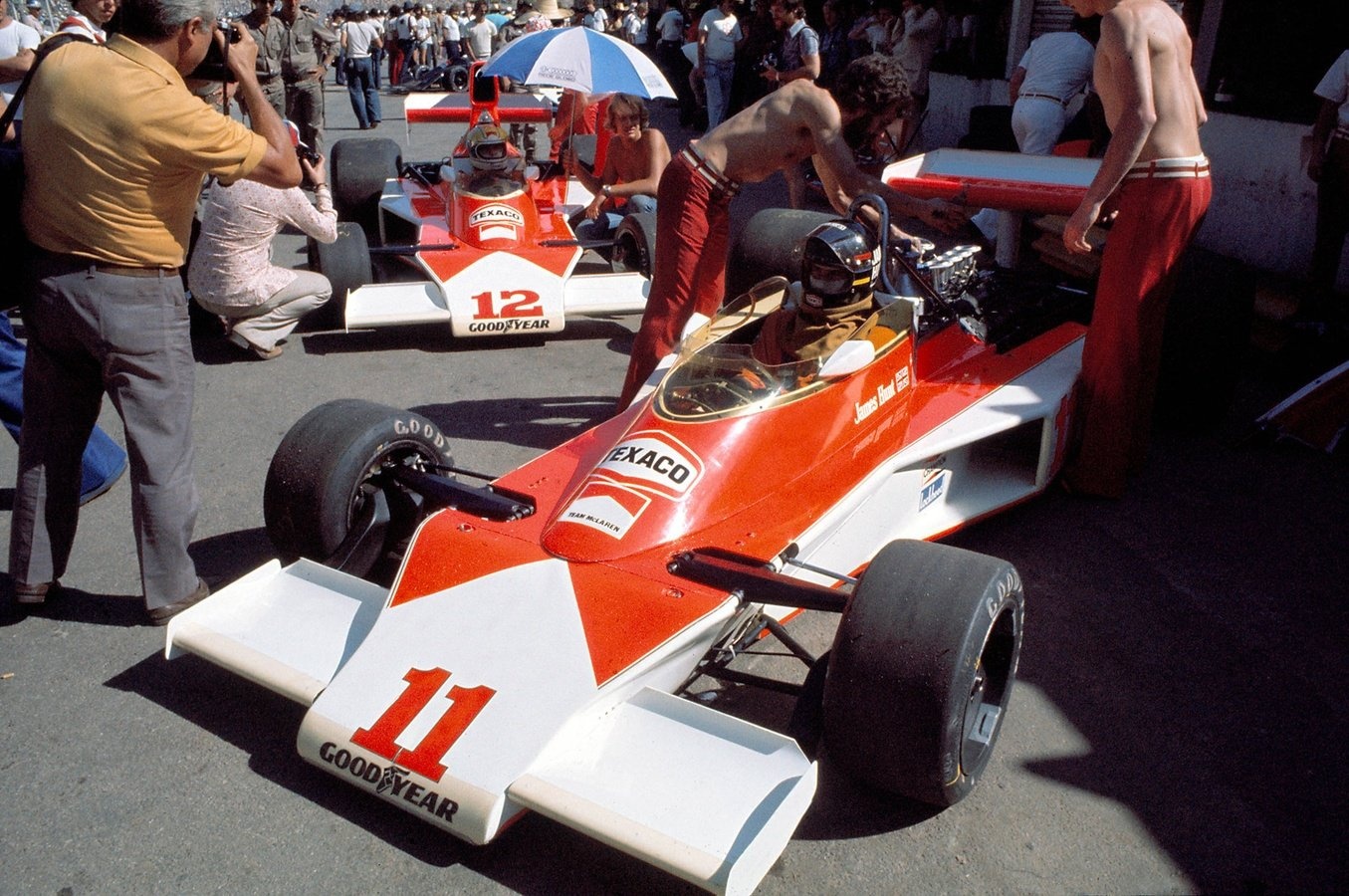 At the opening race of the season Hunt stunned everyone – and not least Ferrari – by putting his M23 on pole position, albeit just 0.02s ahead of Lauda. Mass meanwhile was only sixth, and the die was cast. In the race James lost out to the Ferraris at the start, and then despite a sticking throttle and engine problems he was heading for second place when he crashed out. 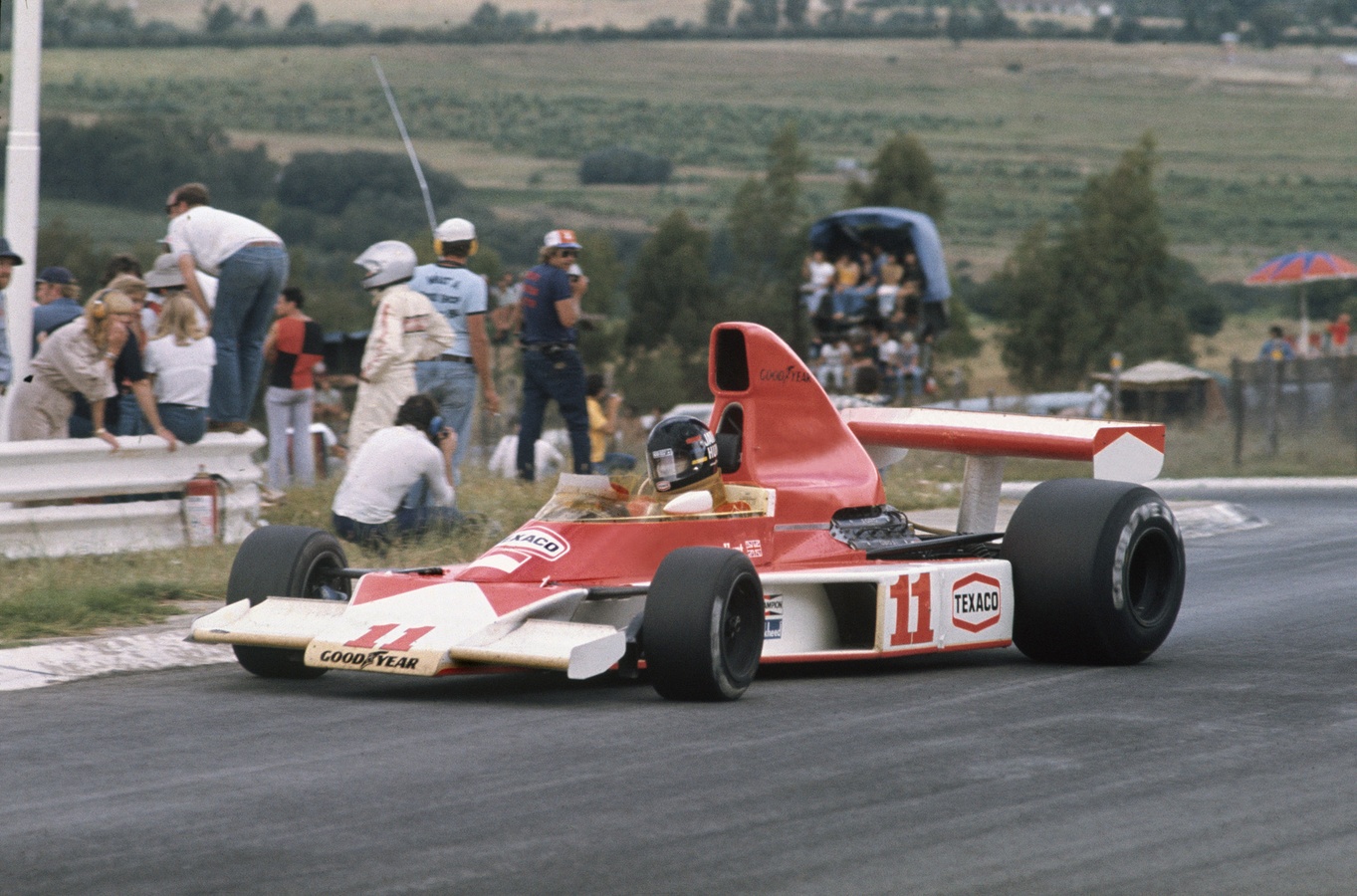 In South Africa he again took pole and again got away badly, but this time he finished second behind Lauda to log his first points of the year. Around that time his profile was raised when it became known that his wife Suzy had started a new relationship with Hollywood star Richard Burton. The Hunt name was now a staple of the gossip columns. 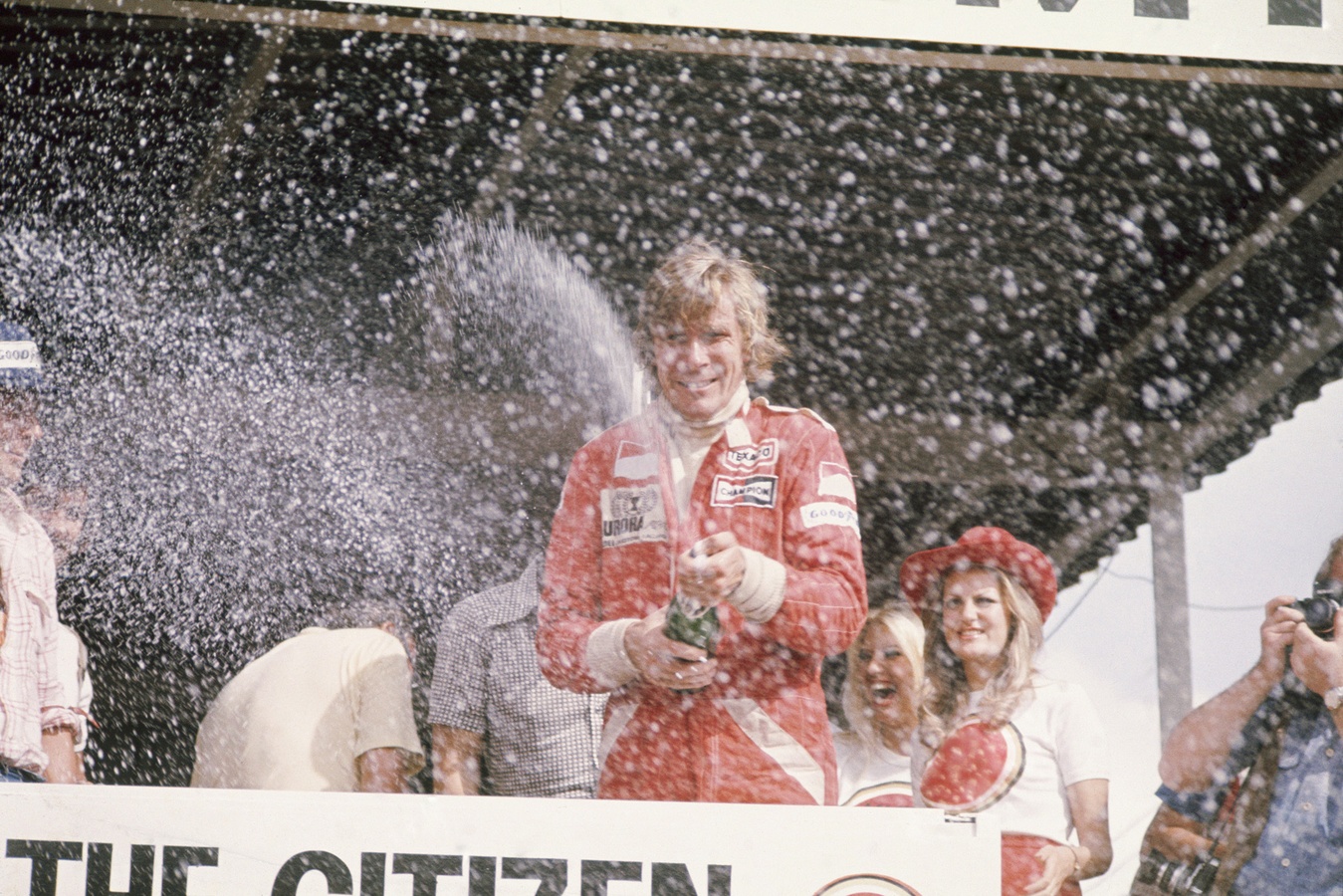 Back in Europe the Race of Champions at Brands Hatch was not worth any points, but Hunt scored a morale boosting triumph and caught the imagination of his home crowd in what was in effect a dress rehearsal for the British GP.

The next race on the streets of Long Beach earned Hunt some headlines for the wrong reasons after he clashed with Tyrrell driver Patrick Depailler and crashed out. He wasted no time in making known his feelings about the French driver. After that he scored another welcome non-championship victory in the International Trophy at Silverstone, where he’d won for Hesketh two years earlier.

A first Grand Prix victory with McLaren could not be far away, and it came at Jarama in Spain, where James took another pole and headed Lauda home. The celebrations were short-lived however, as officials deemed that his car was 1.8cms too wide, and he was excluded. 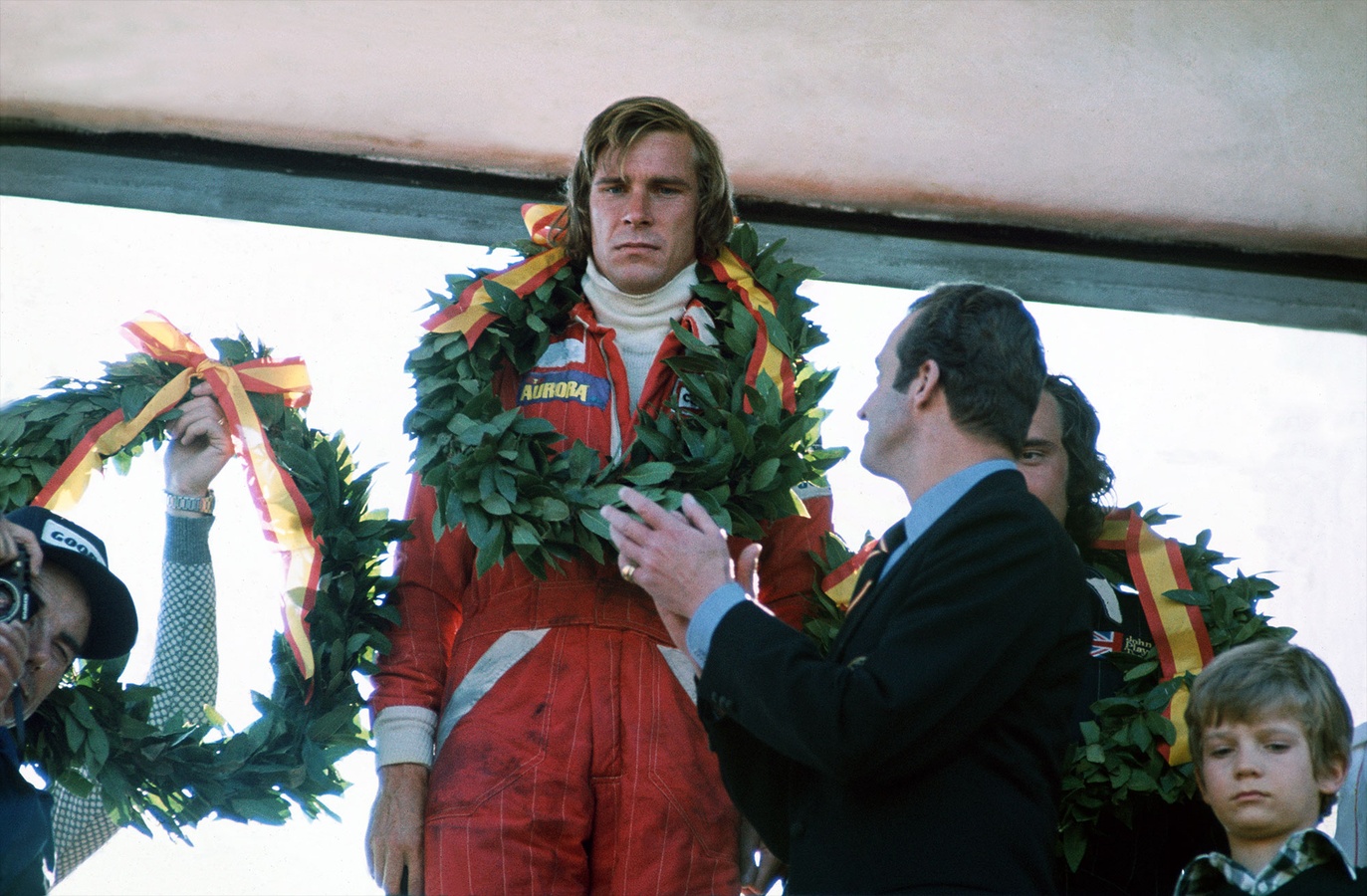 “We felt that we had earned a win by this stage,” said Hunt. “We had won two non-championship races but until then luck had been working against us on the wrong days. Then they told us we had been disqualified. First of all they told us there had been a problem about the width of the car and the stewards were meeting up to decide what to do. There was no point in getting uptight about it. There was nothing we could do if the car was too wide.” 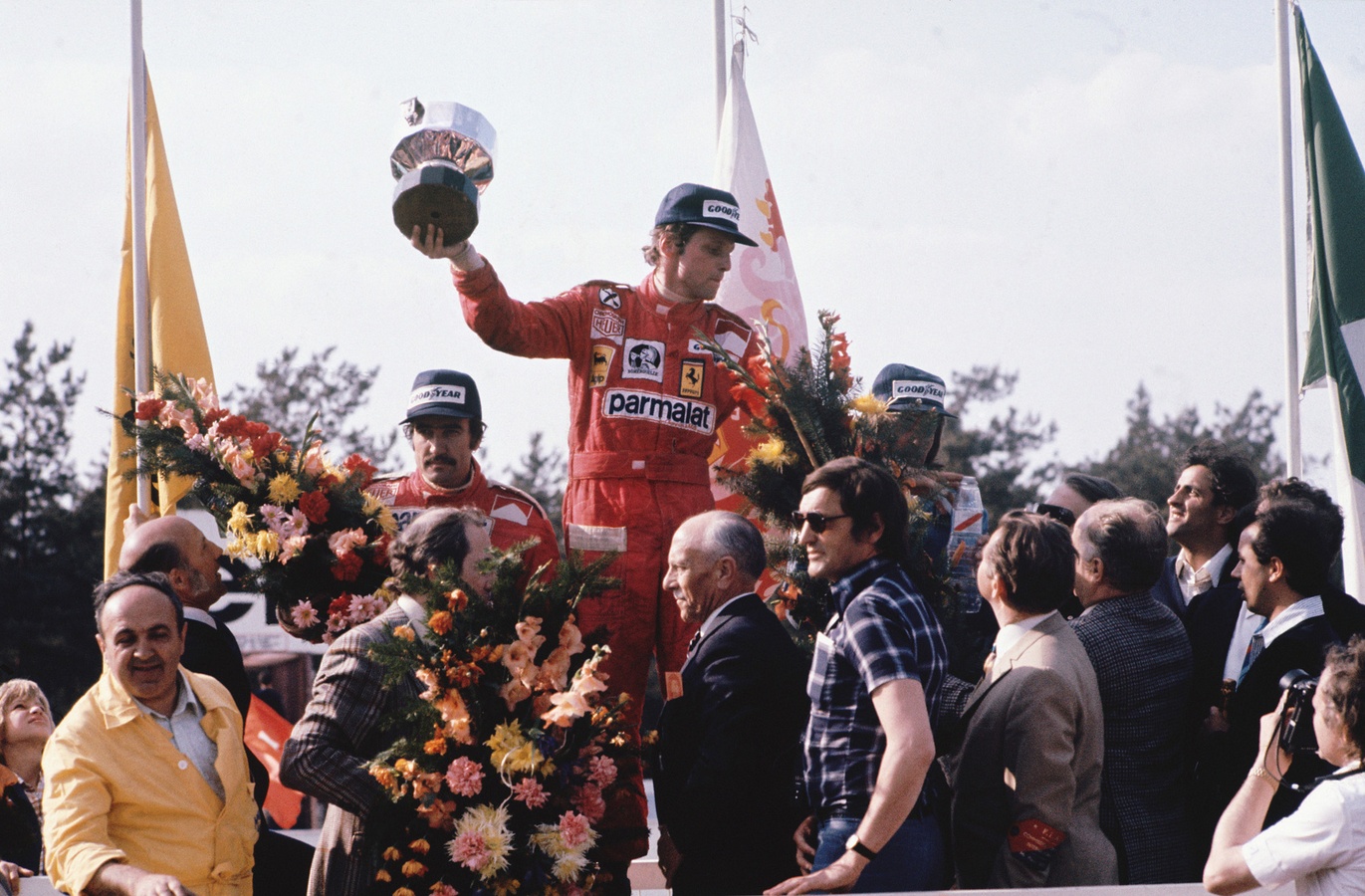 McLaren launched an appeal, but for the moment after four races the score was Lauda 33 points, and Hunt 6. And then it got worse. James suffered a gearbox failure at Zolder in Belgium, and retired with a blown engine in Monaco. He had struggled to get on the pace in the principality, qualifying only 14th, and a spin early in the race had not helped his progress. Lauda won both events, and the score was now 51 to six in the Austrian’s favour. No sane person would have bet on the McLaren man ultimately winning the title… 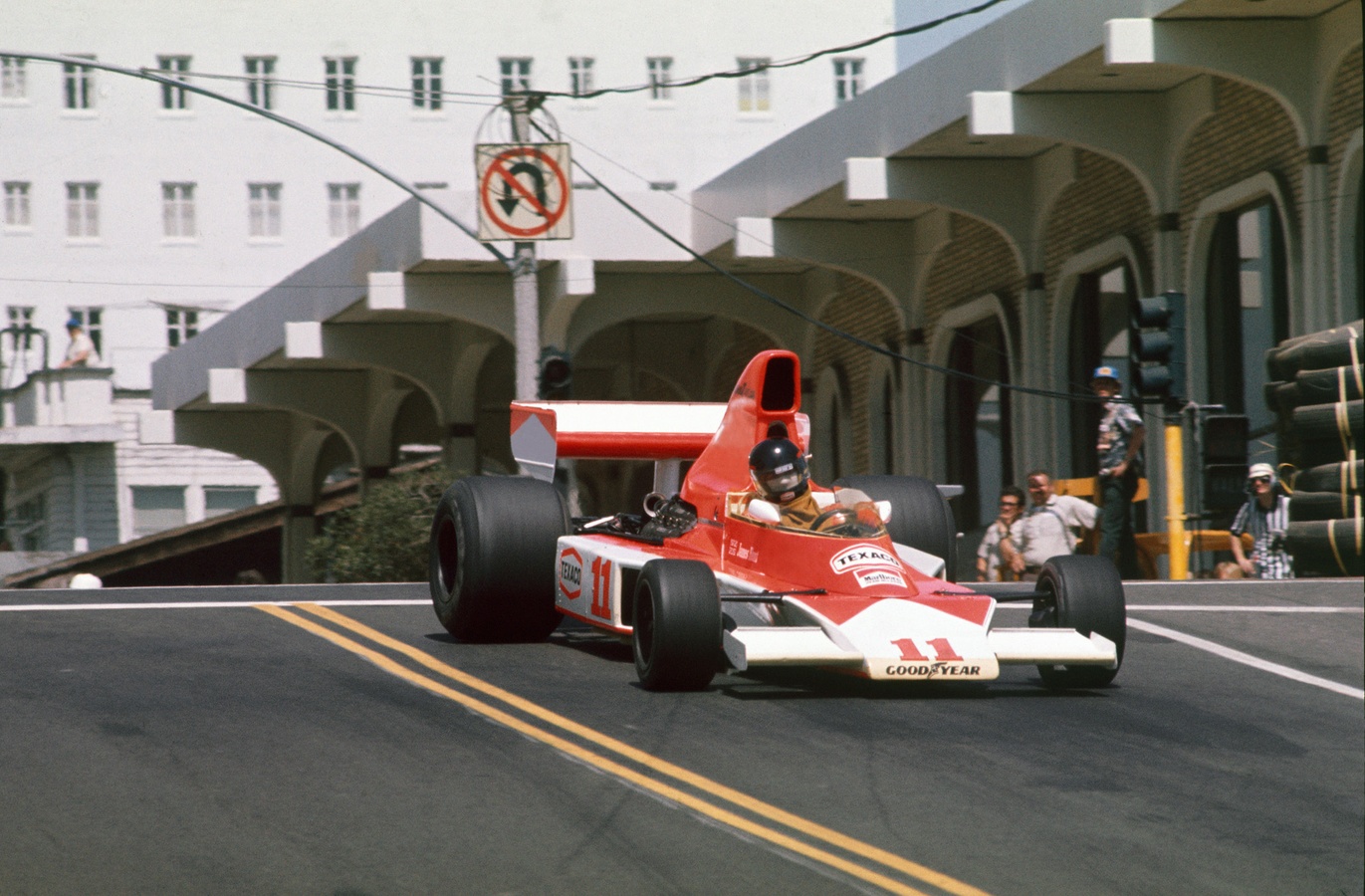 Sweden brought little improvement in Hunt’s fortunes, and from eighth on the grid he finished fifth, at least picking up a couple of points. The only good news for his title aspirations was that Lauda was only third on a day when the six-wheeled Tyrrells finished one-two.

By now Hunt and the team struggled to understand the loss of form since Spain, but eventually they came across the answer. The oil coolers, which were behind the rear wing, had been moved slightly after Jarama – but by just enough to disrupt the airflow in a highly sensitive area. They were relocated to the side of the car, and when James went testing at Paul Ricard, he was back on the pace. He knew he had a winning car. 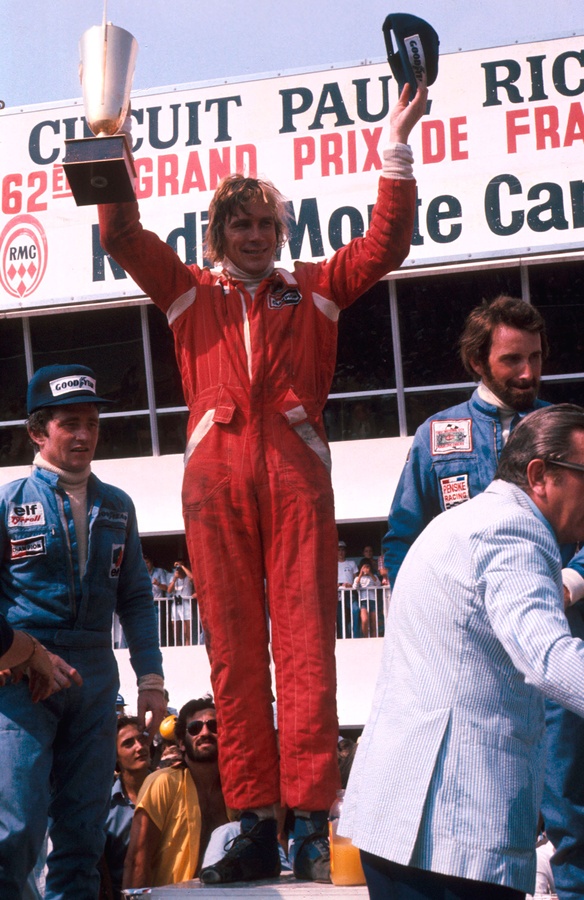 And so it proved at the subsequent French GP at the same venue, where he took pole and won in some style on a day when Lauda suffered a rare mechanical retirement. But there was more to come. The following day the governing body – then known as the CSI – heard the appeal into the Spanish disqualification. McLaren got the win back, along with a $3000 fine. Hunt earned another nine points, while Lauda lost three.

“We presented the case in Paris and they agreed with us that the punishment didn’t fit the crime,” said James. “We asked for a suitable fine instead of disqualification, and that’s what we got.”

He had in effect won two races in two days. The score was now 52 to 26, and James was in second place. It was a long shot, but at least with seven races to go he had a chance, although clearly it would need some bad luck for Lauda to allow him to turn the tables.

“The championship didn’t look that good for me,” he said. “But at that point I had the attitude that I would basically have the rest of the season. I was keeping an eye on the championship, for sure, but I had to take every race as it came and just try to win it because whatever happened to Niki and the Ferrari was not really relevant to me at that point. There was nothing I could do about it. I’d run my race, try to win it and when I got out of the car I’d look at the results and see how I was getting on in the championship.”

Hunt’s next chance to claw back some of the deficit would be at Brands Hatch – where he had won back in March, and where he knew he could count on some strong home support.. 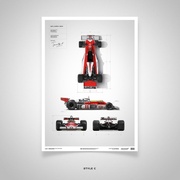