The hero, to paraphrase celebrated writer and professor Joseph Campbell, has a thousand faces.

The American scholar may have been discussing the shared themes and characteristics of ancient myth, but, hey, if we’re playing a little fast and loose with the facts, he could easily have been writing about Fernando Alonso too, right?

The fiery Spaniard certainly knows how to wear a variety of masks, each distilling one of his many distinct personalities to its purest form. When a mask is donned, Fernando assumes the shape and persona of a distinct character, and he slips effortlessly between them.

Now, as the end of his Formula 1 career approaches its conclusion in Abu Dhabi this weekend, we take a look at the many different attributes of Fernando, and how each shaped him into the utterly unique racer that he is.

Fernando has always displayed a never-say-die attitude, and that has come to the fore in recent seasons when invariably he’s not started from the front of the grid, or has been right at the back, due to penalties.

The 2015 Hungarian GP was a classic example. In what was a frustrating season for McLaren, Budapest was expected to be one of its stronger weekends, but Fernando still only qualified 15th. However, in the race he was on superb form, taking full advantage of collisions and the problems of others ahead.

With Mercedes duo Hamilton and Rosberg hitting trouble, he climbed up the order. Overheating brakes then became a problem, but a stop to remove debris – a visor tear-off – allowed him to fit fresh tyres for the sprint to the flag. He crossed the line in a superb fifth place. 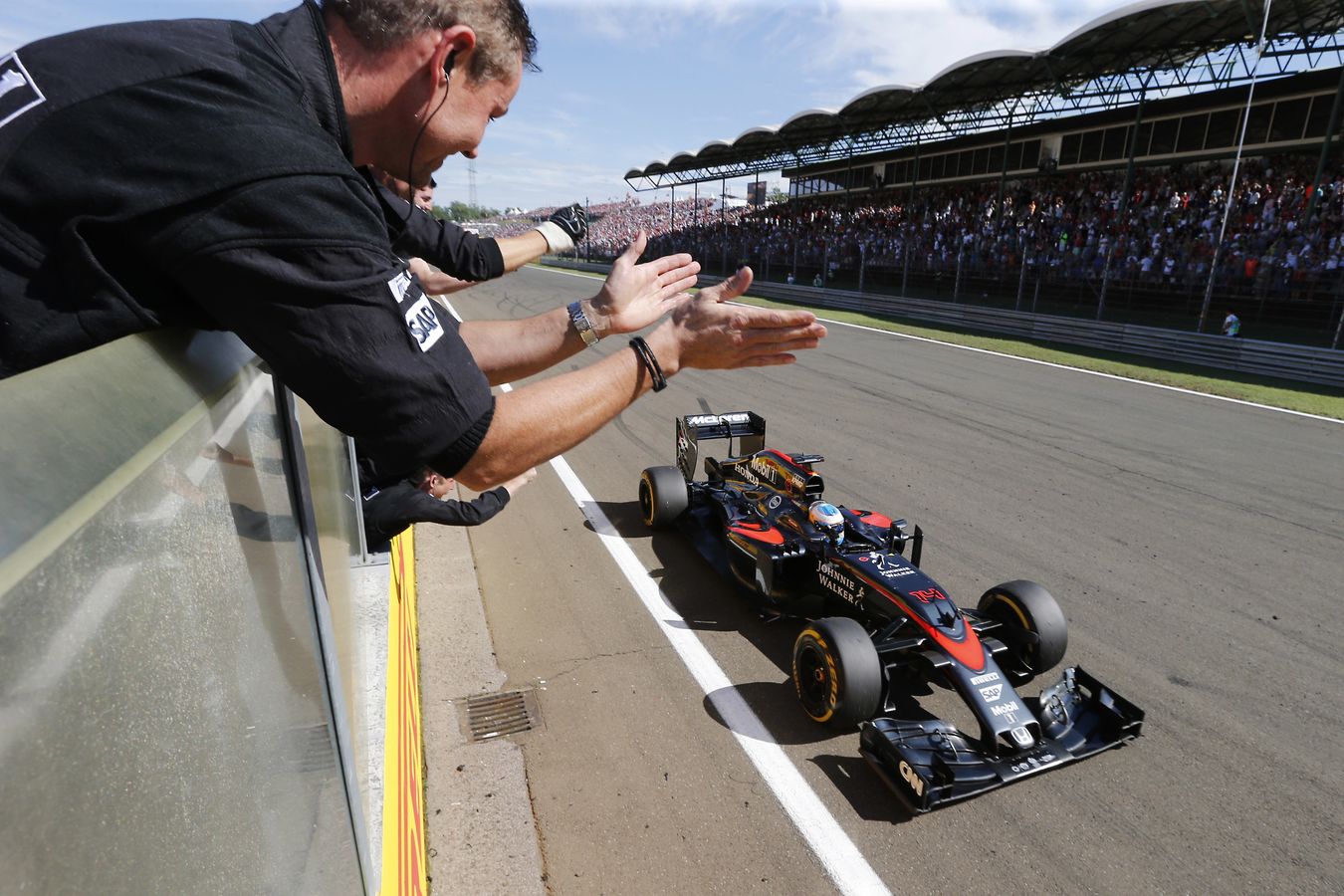 “Fifth is unbelievable, a little impressive for us because in this moment we are not super competitive,” he said afterwards. “We know the car is improving, we know we are getting more competitive, but it's always nice to touch it with your hands.

“We were a little bit lucky with some of the things that happened, but in some races we've been unlucky, so we need to take every opportunity.”

Similarly, in Azerbaijan this year he qualified 12th, but his hopes appeared to be dashed when he was hit by the Williams of Sergey Sirotkin on the first lap.

With two punctures he crawled back to the pits, and most observers thought he was out of the race with damaged right-hand suspension. However, his crew dutifully fitted a new nose and fresh tyres – and, once back out on track, he was able to confirm that the car was still in one piece. From the back of the field he kept his focus and, helped by the Safety Car, began to make up ground. Extraordinarily, he was in seventh place when the chequered flag fell, proud of what he knew had been a special performance. 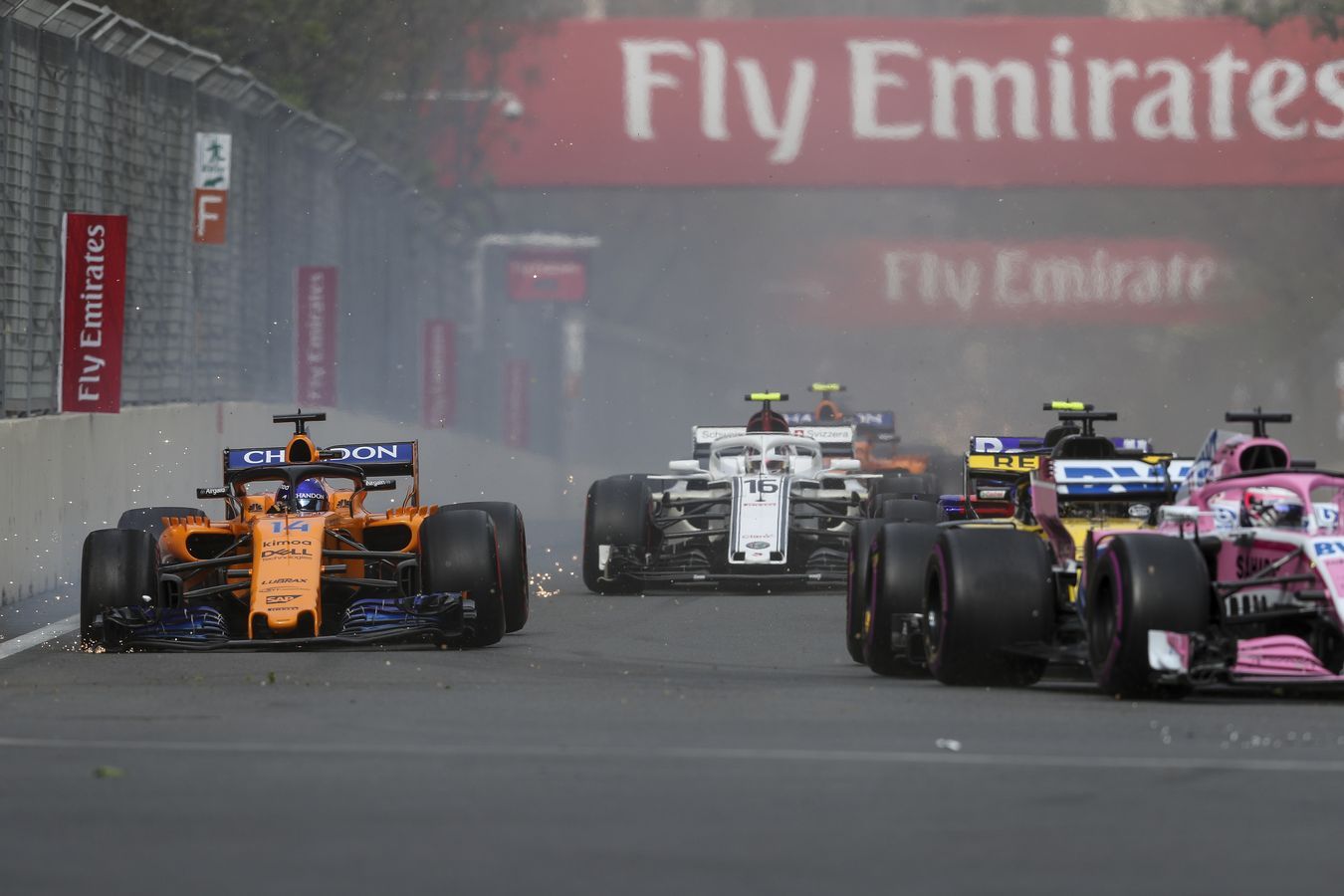 “But we didn’t park or retire the car and fought for every tenth, every lap, close to the walls all race long and, I think it was the best race of my life. They changed the tyres and they told me the car was heavily damaged so I thought I wouldn't be able to finish or that I would be very slow. But I started overtaking cars and then with the Safety Car I gained some positions in the end.”

Verdict: Every champion has huge reserves of self-belief and determination; it’s what makes them able to operate so successfully in the cockpit and commandingly lead the team itself. Fernando, in particular, has become one of F1’s talismans, able to muster results and achievements that far exceed the performance of the car.

A unique feel for grip

Top racing drivers have to know how to get the best from their tyres. That is often demonstrated by the way they find those final few vital hundredths in qualifying, or do incredible things on the first lap – on cold tyres – that others can’t.

That crucial ability to judge grip is made even more apparent in the wet. In the atrocious conditions at the start of the 2007 European GP, held at the Nurburgring, Fernando stayed out of trouble when many others, including McLaren team-mate Lewis Hamilton, spun off. After a red flag and resumption he kept himself in contention in dry conditions, running second behind Felipe Massa’s Ferrari. Then in the closing laps when rain came again, he was able to show his true class. 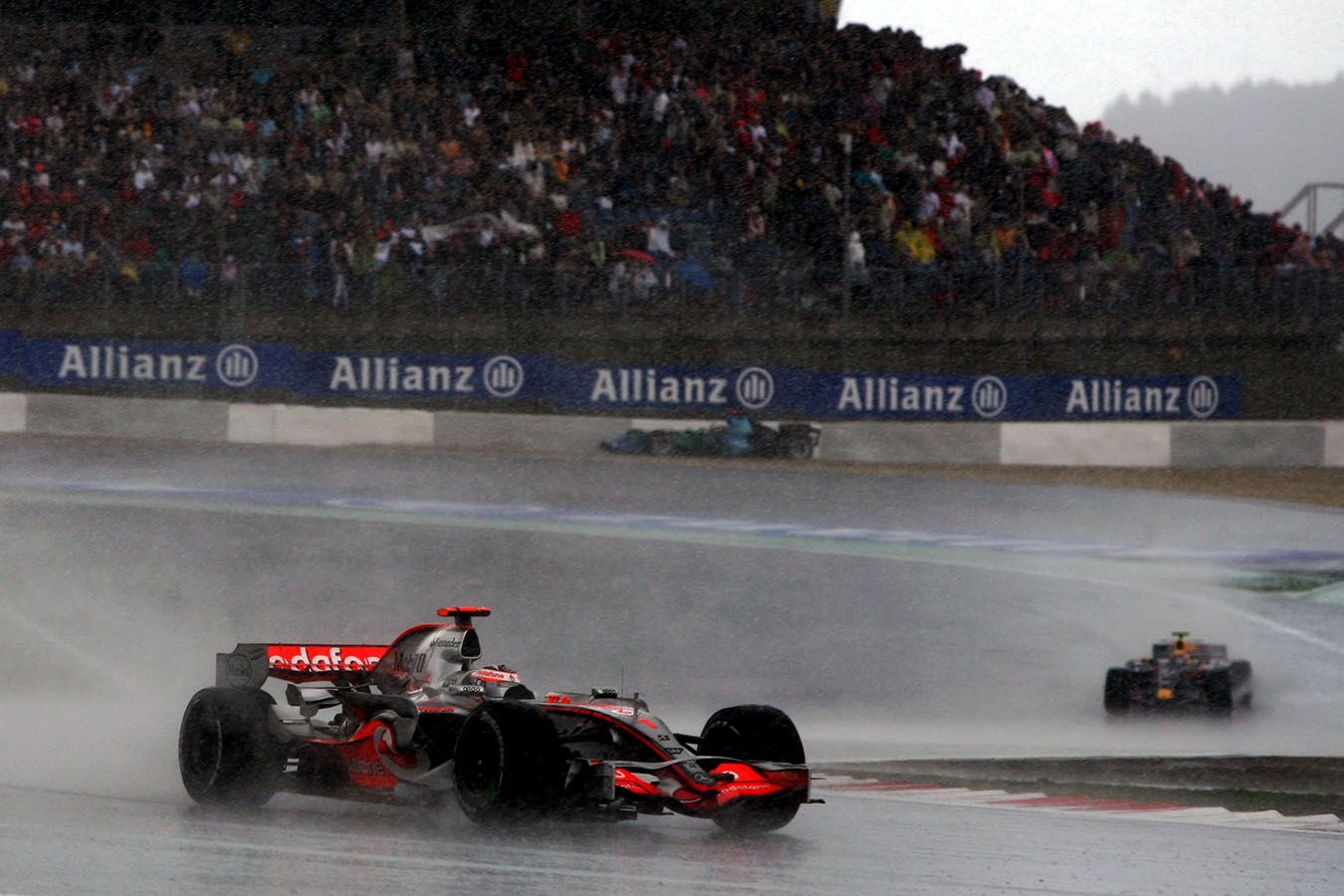 Everyone charged in for Intermediates, and it was soon apparent that leader Massa was not comfortable on his. Fernando reeled him in and, after a couple of controversial close calls, forced his way into the lead with four laps to go. It was an incredible conclusion to an eventful afternoon, and Fernando viewed maximum points almost as a bonus.

“I enjoyed the race so much because I like the different weather conditions,” he said. “But at one point, when I was second, I said maybe it’s not the right time to rain, because I was happy with second place. Lewis was out of the points and Kimi as well, so for me eight points were good enough.”

At the 2016 Russian Grand Prix, he wowed with utterly mesmerising first-lap pace: from 14th on the grid. He got off the grid like a bullet, ducked into the slipstream of the cars ahead, dodged the spinning Sebastian Vettel, and emerged unscathed in a miraculous seventh position. His ultimate finishing position of sixth was ultimately set up by that unbelievable opening lap.

Verdict: Some drivers thrive on the uncertainty thrown down by poor, or inconsistent, grip. Jenson Button was one of them; Fernando is another. What sets them apart is Fernando’s utter ruthlessness to attack when there is a shortfall of grip.

On occasion, Fernando has battered his rivals into submission with an utterly dominant performance, as he demonstrated during his first stint at McLaren.

Fernando was still learning about the team and new-for-’07 Bridgestone tyres when he qualified second at the 2007 Malaysian Grand Prix on what was his second outing with his team. Only Massa’s Ferrari was ahead, and Fernando knew that the start was his best chance.

He got away well, ducked down the inside of the Brazilian, and forced his way past through the first couple of turns. When he looked in his mirrors, team-mate Hamilton had also got by Massa, who ran wide a couple of corners later, showing just how hard it is to find the limit at the start.

After that it was a demonstration run for the two McLarens. Despite radio issues in the first part of the race, and a lack of knowledge about how the tyres would fare over a long run, Fernando came home well clear of Hamilton to log his first win for the team. 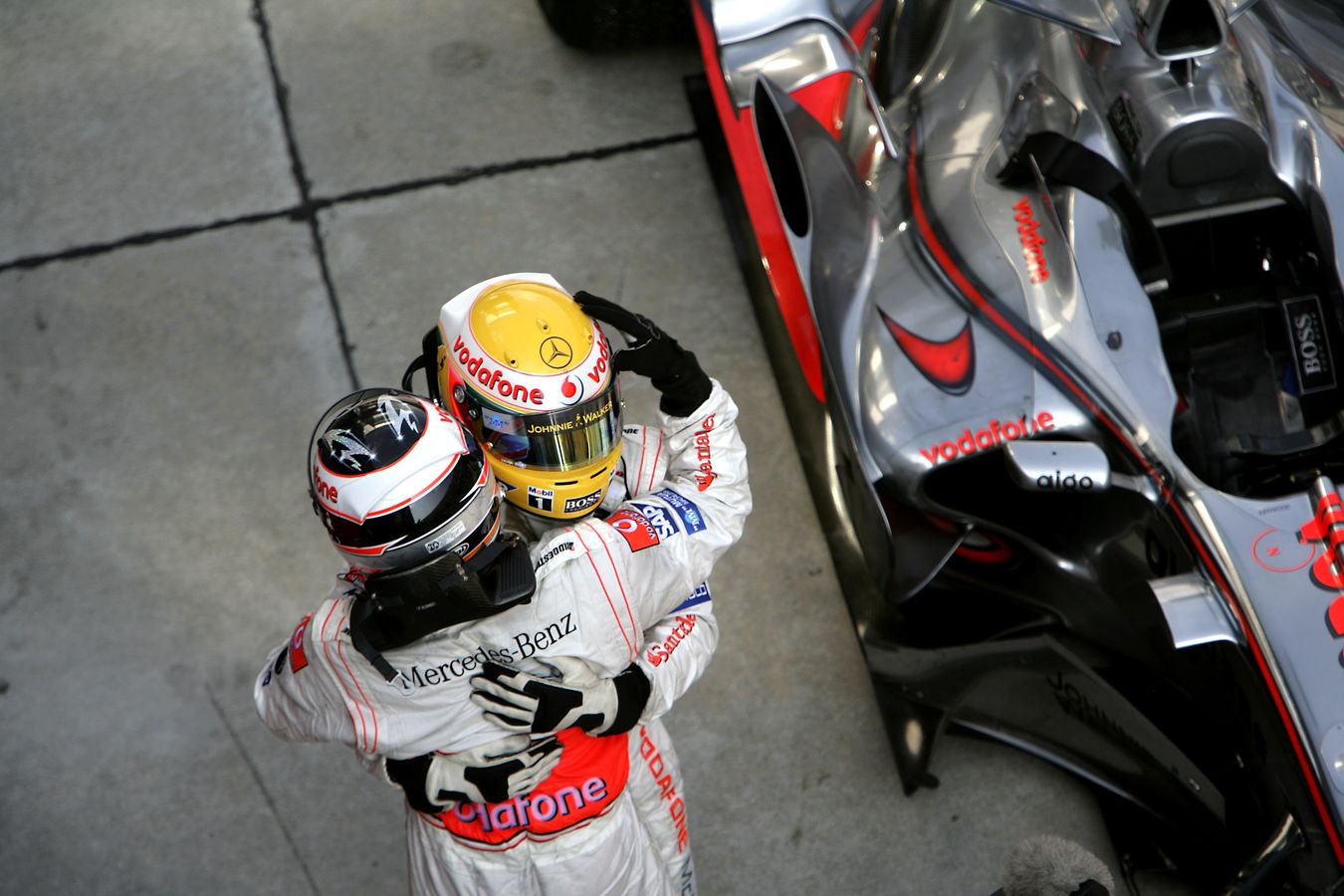 “Ferrari was favourite coming to the Malaysian GP and I thought our only chance to win was to lead into the first corner,” he said. “Thanks to a good start and a good car, I was able to get down the inside of Felipe into Turn One. Once I was able to open up a gap of 7-8s, I felt rather more relaxed.”

Fernando’s victory later that year at Monza was made even more special given the stressful title battle, which involved both McLaren drivers and Ferrari’s Kimi Raikkonen.

Fernando went into the weekend five points shy of Hamilton, with Massa and Raikkonen still in title contention. Quickest in practice on Friday, Fernando topped the times in FP3 and again in Q1, Q2 and Q3, ultimately pipping Hamilton to pole by almost 0.037s. He had made his point on Ferrari’s home ground.

Fernando made sure that he stayed ahead of Lewis from the start, and after Massa dropped out, it was all about the McLaren drivers, who planned two stops to protect their tyres. Fernando remained safely in front, and having relinquished the lead only briefly to Kimi after his first stop, he came home six seconds clear of Hamilton. He also added fastest lap to his pole and win, to make it a hat trick, and underline his domination in front of the Italian crowd. 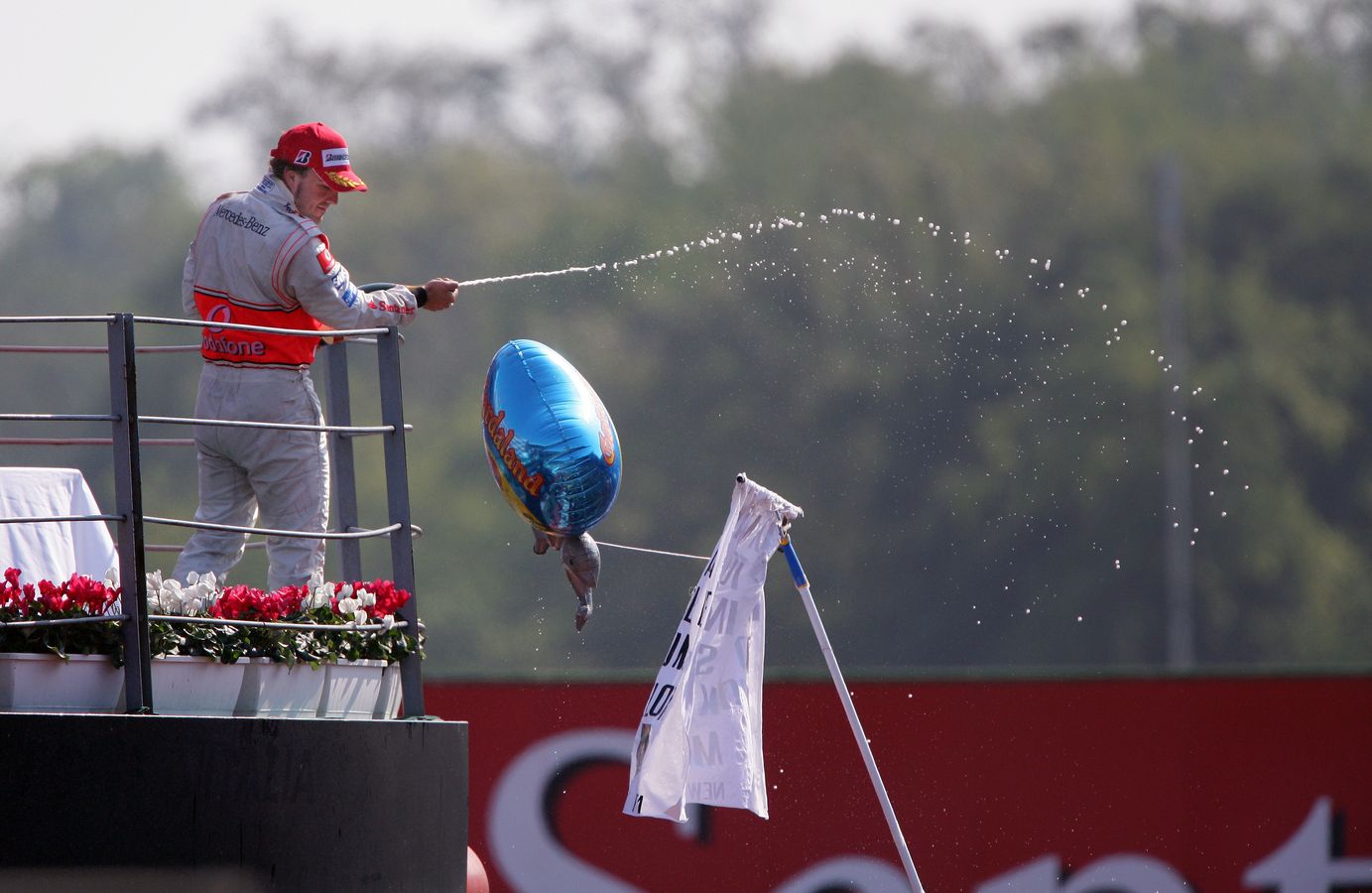 “To win at Monza for the first time is very special,” said Fernando. “Sometimes everything goes in the right direction. This weekend was one of those times and we were able to keep up the momentum. My start wasn’t perfect, and I had to defend my lead coming in to the first corner. In the second corner I was a bit worried as I thought Lewis and I would touch, but fortunately this did not happen.”

Verdict: Jenson Button regularly claimed that Fernando was the toughest team-mate he ever raced against, neatly summing it up by saying, ‘If he wasn’t already ahead of you, he’d be right behind you, trying every trick in the book to get past.’ That’s certainly true; and allied to a canny intelligence, he could also use every gizmo in the cockpit to try and maximise his push – not something every driver can do easily.

Fernando has often demonstrated an ability to win even when he didn’t have the best car on a given day – thanks to a combination of sheer speed, racecraft and all-round savvy.

The 2005 San Marino GP, early in his first title-winning season with Renault, remains one of his most famous victories. It was a very competitive race, with McLaren and BAR both in the frame, but after the last pit stops it came down to a straight battle between Fernando in the lead, and Michael Schumacher in second.

The Ferrari driver was flying, his Bridgestone tyres proving better than Alonso’s Michelins in race trim, but getting stuck behind Jenson Button’s BAR had cost him crucial time, and left him chasing Fernando. However despite pushing hard and having pace in hand he simply couldn’t get past Fernando, who absorbed an insane amount of pressure to stay safely in front all the way to the flag.

“This was my best win yet,” he said at the time. “I knew Michael was catching so I had to push throughout. It was close, but I was 99% sure he wouldn’t be able to overtake.” 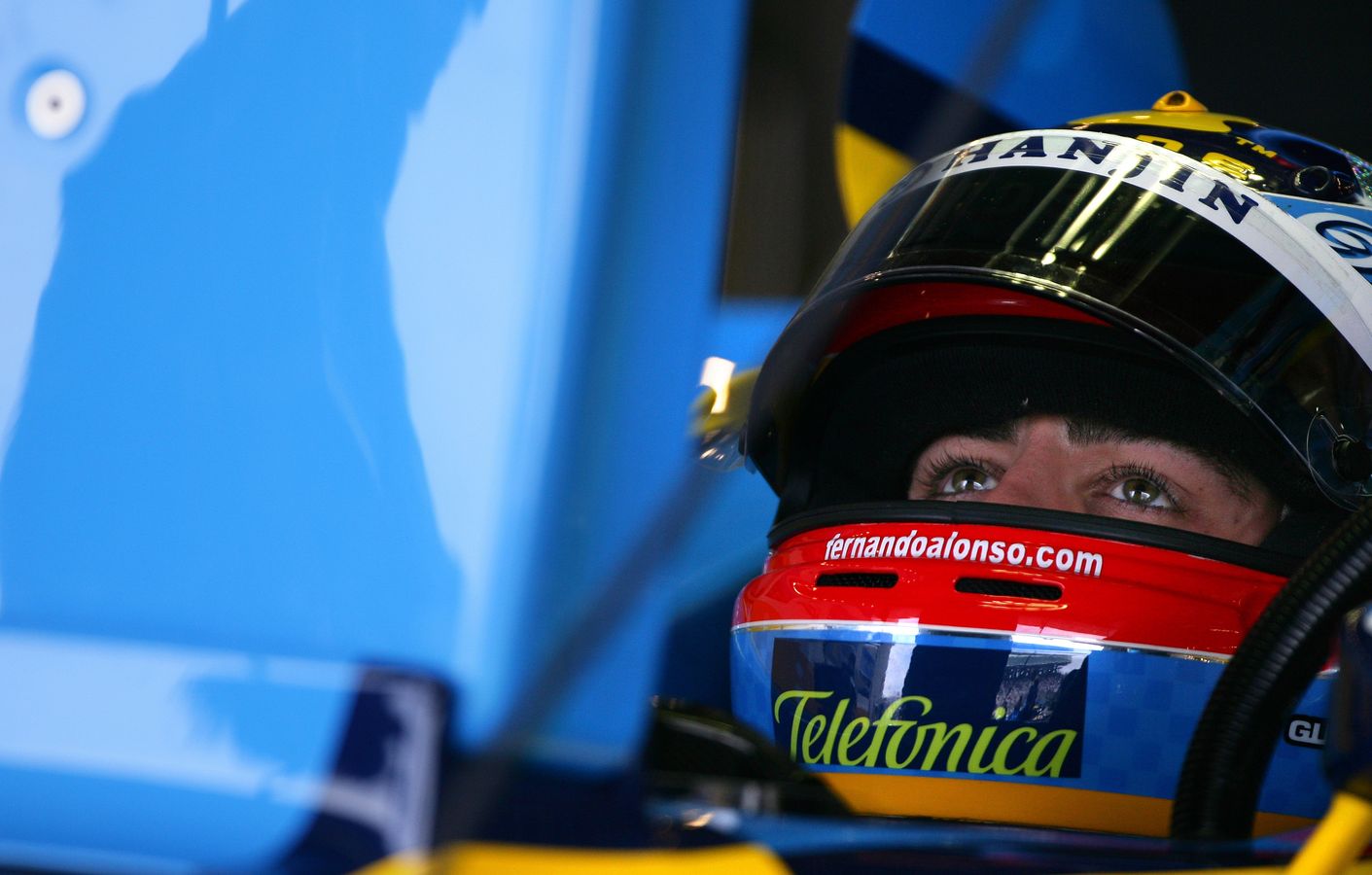 Fernando won for Renault at Fuji in 2008 when he seized an unexpected opportunity and, in typical style, took full advantage. Having scored a surprise victory in Singapore – one that would later be mired in controversy – he won fair and square next time out in Japan.

That season was all about McLaren and Ferrari, but in qualifying Fernando got in among the main contenders by qualifying fourth. Then at the start Hamilton, Kimi Raikkonen, Heikki Kovalainen and Massa stumbled over each other and ran wide, and BMW’s Robert Kubica snuck into the lead, ahead of Fernando.

The Spaniard kept pushing, and when Kubica pitted he ran for one more lap, took on less fuel, and got into the lead. He then had to open up a sufficient gap to stay clear of Kubica at the second stops, which he managed to do with some consistently fast lappery.

“It’s still difficult to believe what we have done!” he said. “Winning in Singapore was unexpected, but we benefited from special conditions. Today we won again on a circuit that was not supposed to suit us. It's unbelievable and I am extremely happy.”

Verdict: Fernando is the racer sans pareil in the Formula 1 world; he’s the driver whom most of his peers would rank as the overall greatest in the pit-lane. And, let’s face it, if that’s what most current F1 drivers think, who are we to argue?

The Spaniard's wildest, wackiest and most iconic moments