Look only to the shades, sideburns and swagger, and it becomes sometimes easy to appreciate the fact that Emerson Fittipaldi was a darn fine racing driver. His wasn’t the most immediate driving style to define: clever yet possessed of incredible bravery; precise yet capable of the bravest overtaking moves, Emmo nonetheless became a double world champion by virtue of his sheer completeness as a racer.

While we celebrate his 1974 world championship elsewhere (LINK), these are the five races that we think define Emerson’s mightily impressive two-year stint at McLaren. 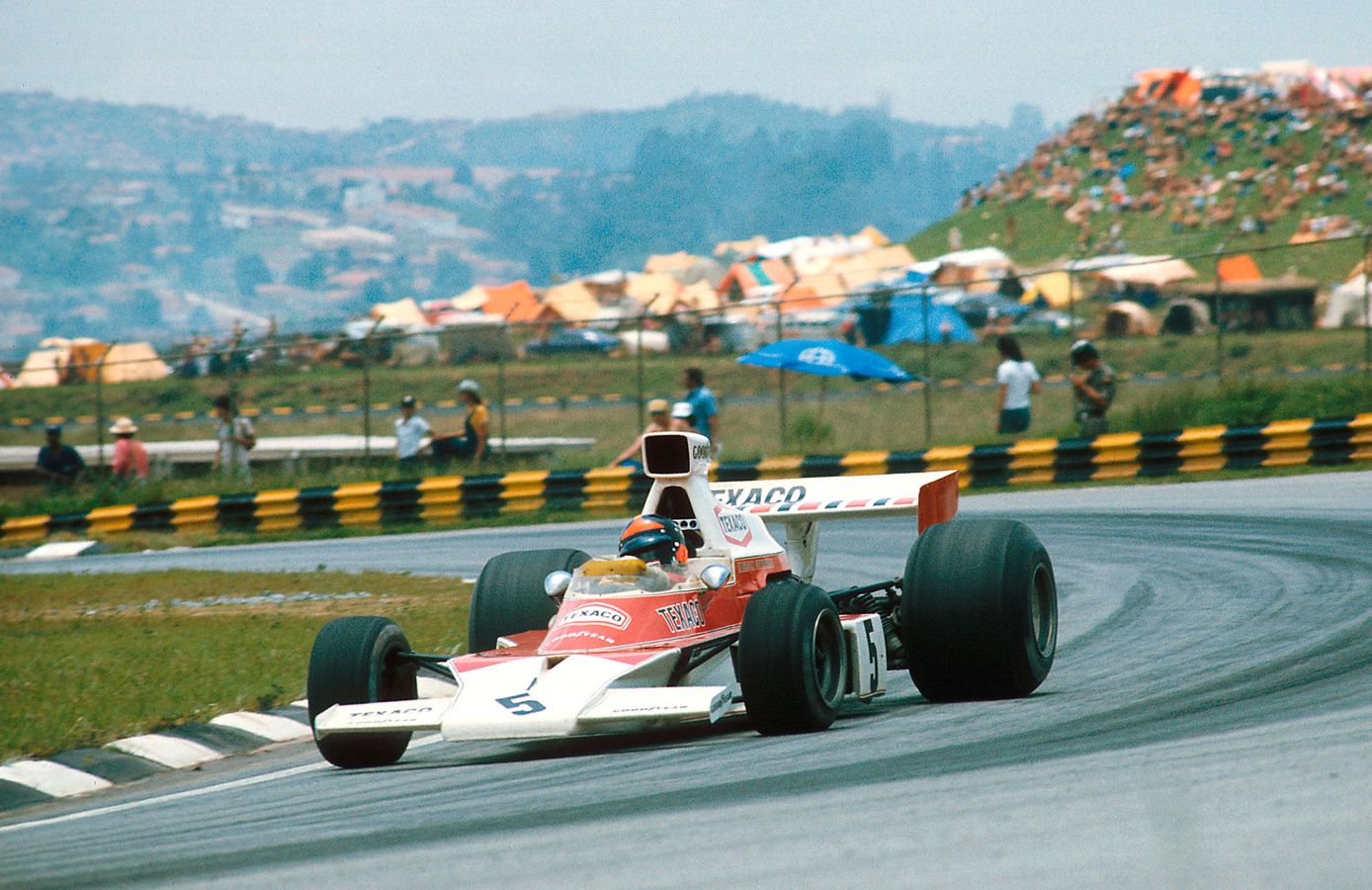 It was Emerson’s second Grand Prix for McLaren, at his beloved Interlagos (the glorious old 5.0-mile [8.0km] version), and he started it from pole position.

He made an indifferent start, however, and was immediately passed by Carlos Reutemann (Brabham) and Ronnie Peterson (Lotus). He soon found a way past Carlos, however, and set off in pursuit of Ronnie.

“Over the long, bumpy corners of Interlagos, the circuit I knew so well and loved so dearly, my McLaren M23 was feeling good – very good in fact,” he remembers. “And I gradually realised that I was catching Ronnie, and soon I began to think about how I might pass him.”

On lap 16 he did just that – and drove on to dominant victory, lapping every driver except second-placed Clay Regazzoni (Ferrari), and thereby delighting tens of thousands of his fellow countrymen, who cheered his victory to the grandstand rafters. 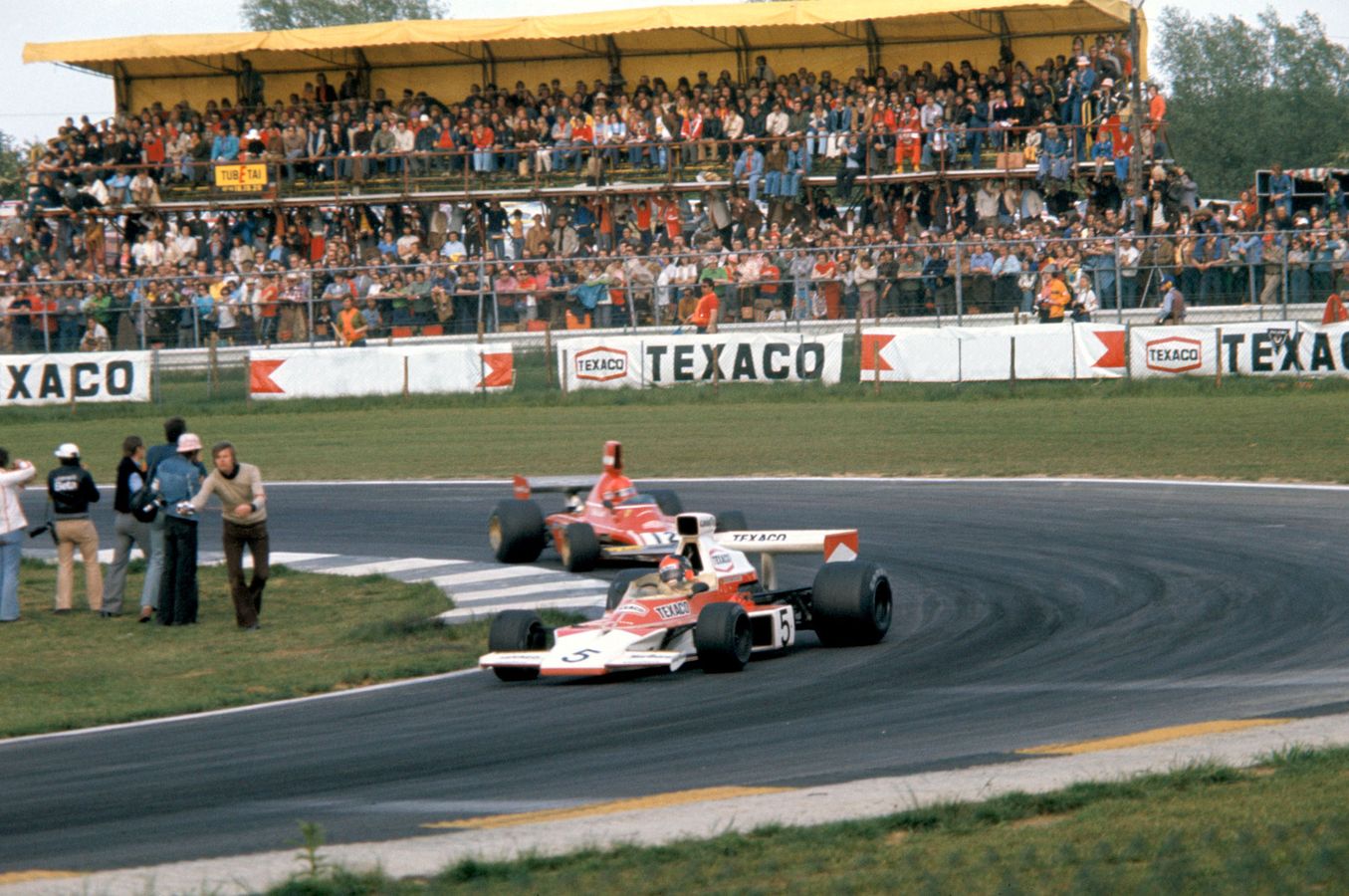 The 1974 Belgian Grand Prix took place at the flat and nondescript Nivelles circuit, the second and final grand prix to be held there. The first and previous grand prix to be held there had been won by Emerson (for Lotus in 1972), from pole position, but in qualifying for the 1974 race he could place his McLaren M23 only fourth, behind Clay Regazzoni (on pole for Ferrari), Jody Scheckter (P2, Tyrrell) and Niki Lauda (P3, Ferrari).

Clay made the best getaway, and led at the start, closely followed by Jody and Emerson, who had squeezed past Niki at Turn One. Emmo was already flying: on the back straight on the opening lap he had his McLaren in Jody’s Tyrrell’s wheel-tracks, and Jody was powerless to prevent Emerson diving down the inside at the hairpin and taking second place from him.

Emerson now set after Clay, and by one-third distance he had caught him. “But Clay was always notoriously hard to pass, so I knew I’d have to plan my move very carefully,” Emerson remembers.

In the end he did not have to – because, as Clay and he came up to lap a bunch of back-markers at around half-distance, Clay misjudged a passing manoeuvre and ran wide, allowing Emmo to nip through into the lead. Niki, who had passed Jody to work his way up to the two leaders, was also able to overtake his hapless team-mate, pushing poor Clay from first to third in a single corner.

It was now a two-man fight to the flag – and, although Emerson was driving smoothly and quickly at the head of the field, Niki was giving it the beans in his efforts to pass the McLaren man and wrest the win. 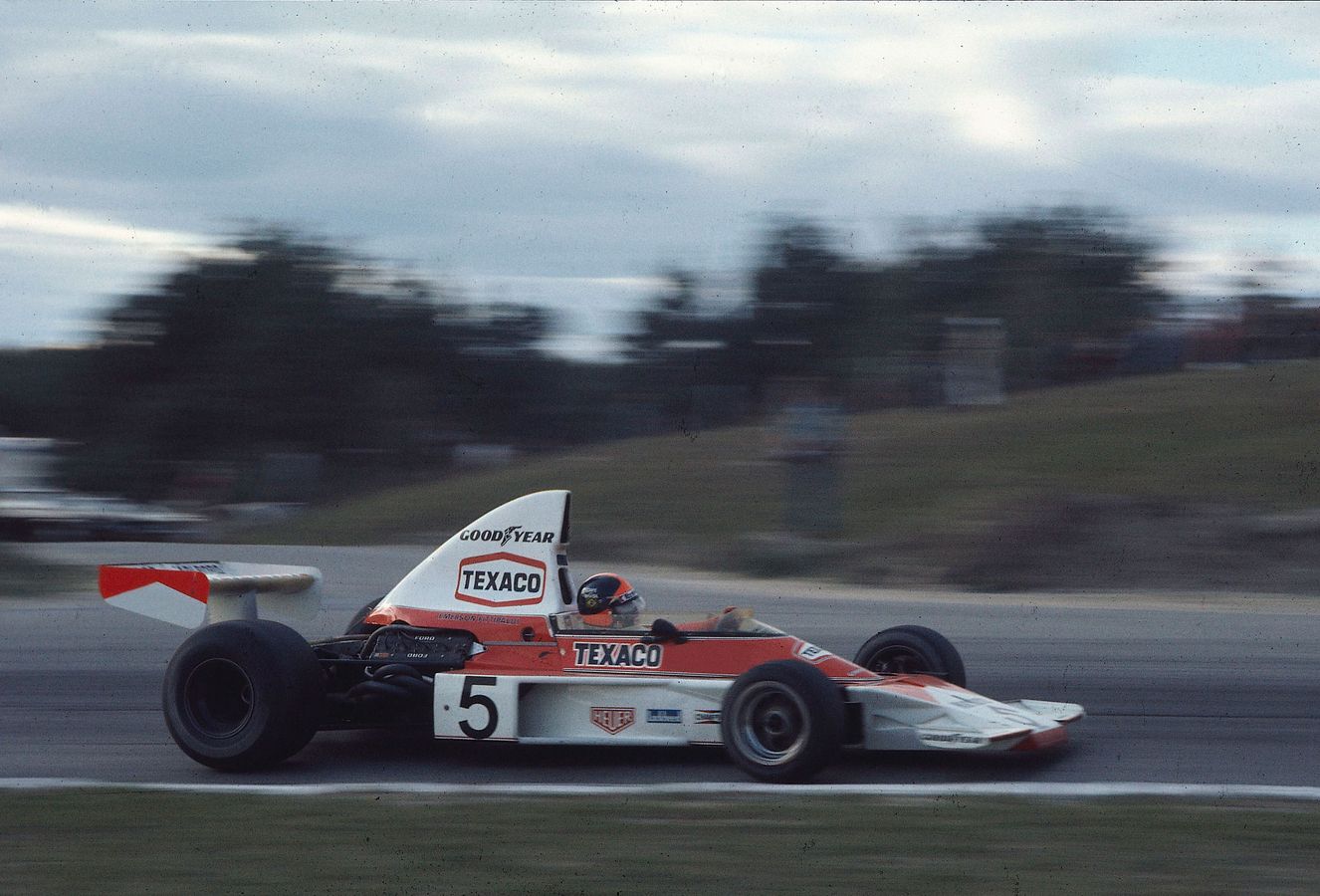 Mosport Park, another fast and bumpy circuit that rewarded bravery, was the home of the Canadian Grand Prix throughout most of the 1970s. It was also a happy hunting ground for McLaren, which had won the race the previous year, 1973, courtesy of Peter Revson, and had also won no fewer than five Can-Am races there over the past seven years.

In 1974, locked in a titanic world championship battle with Ferrari’s Clay Regazzoni, with Tyrrell’s Jody Scheckter also in with an outside chance of wresting the crown, Emerson desperately needed a good result at Mosport, the season’s penultimate grand prix.

On Saturday he took the pole, Ferrari’s Niki Lauda qualifying just behind him in P2. On race day it was Niki who made the better start, however, but at the end of lap one Emerson was in second place behind Niki, with Clay third and Jody fourth.

Jody soon passed Clay, and began to harry Emerson for second place. But Emmo defended his position steadfastly and adroitly, and lap 49 Jody crashed out, the victim of fading brakes.

Emerson was therefore able to concentrate on his quarry, Niki, without having to watch his mirrors, since Clay had dropped off his tail and was no longer a threat. By three-quarters distance, Emmo had inched his McLaren’s nose-cone to within striking distance of Niki’s Ferrari’s rear wing, but in the end there was no need for him to plan an overtake, because, on lap 67, with just 13 laps to go, Niki lost it after running over debris and crashed out. 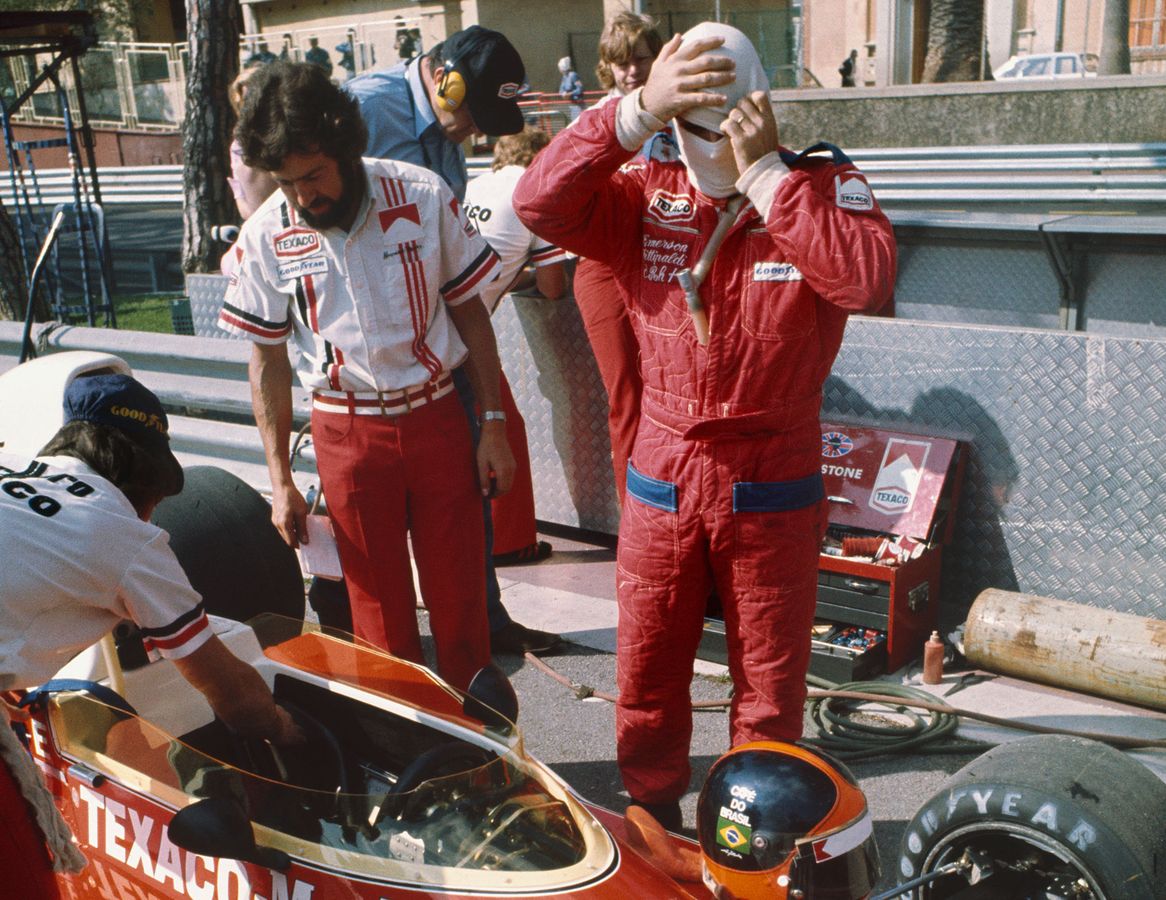 Emerson never won at Monaco – one of the few near-misses of his super-successful racing career and one he regrets still – but he finished second twice, in 1973 and 1975.

In both races he was beaten by the season’s eventual champion – Jackie Stewart in 1973 and Niki Lauda in 1975 – and in both races he was in the thick of it, with chances to win, eventually crossing the line only a few metres behind the winner.

After qualifying for the 1975 race, though, Emmo appeared to be out of the reckoning, having qualified ninth on the least overtaking-friendly circuit in the world. On race morning, though, it rained, and, as the race started, the famous asphalt was still damp.

Emerson made a decent start, and determined to take things steadily in the tricky conditions. Others were less circumspect, however, crashing out left, right and centre – Jean-Pierre Jarier (Shadow) on the first lap, Clay Regazzoni (Ferrari) and John Watson (Surtees) on lap 36, Tom Pryce (Shadow) on lap 39, Vittorio Brambilla (March) on lap 48, James Hunt (Hesketh) on lap 63 and Mark Donohue (Penske) on lap 66 – and with 15 laps to go, on a track that was now bone-dry, he had inherited second place and was setting about reducing the gap to Niki, who had led since the start.

With five laps to go he was staring at Niki’s Ferrari’s gearbox, and looking for a way past. But, Monaco being Monaco, Niki was able to defend his lead by efficient and judicious placing of his Ferrari towards the inside line on all the braking areas. As the two cars exited the final corner, Emmo accepted second best, and ended up crossing the finish-line 2.80s behind the winning Ferrari. 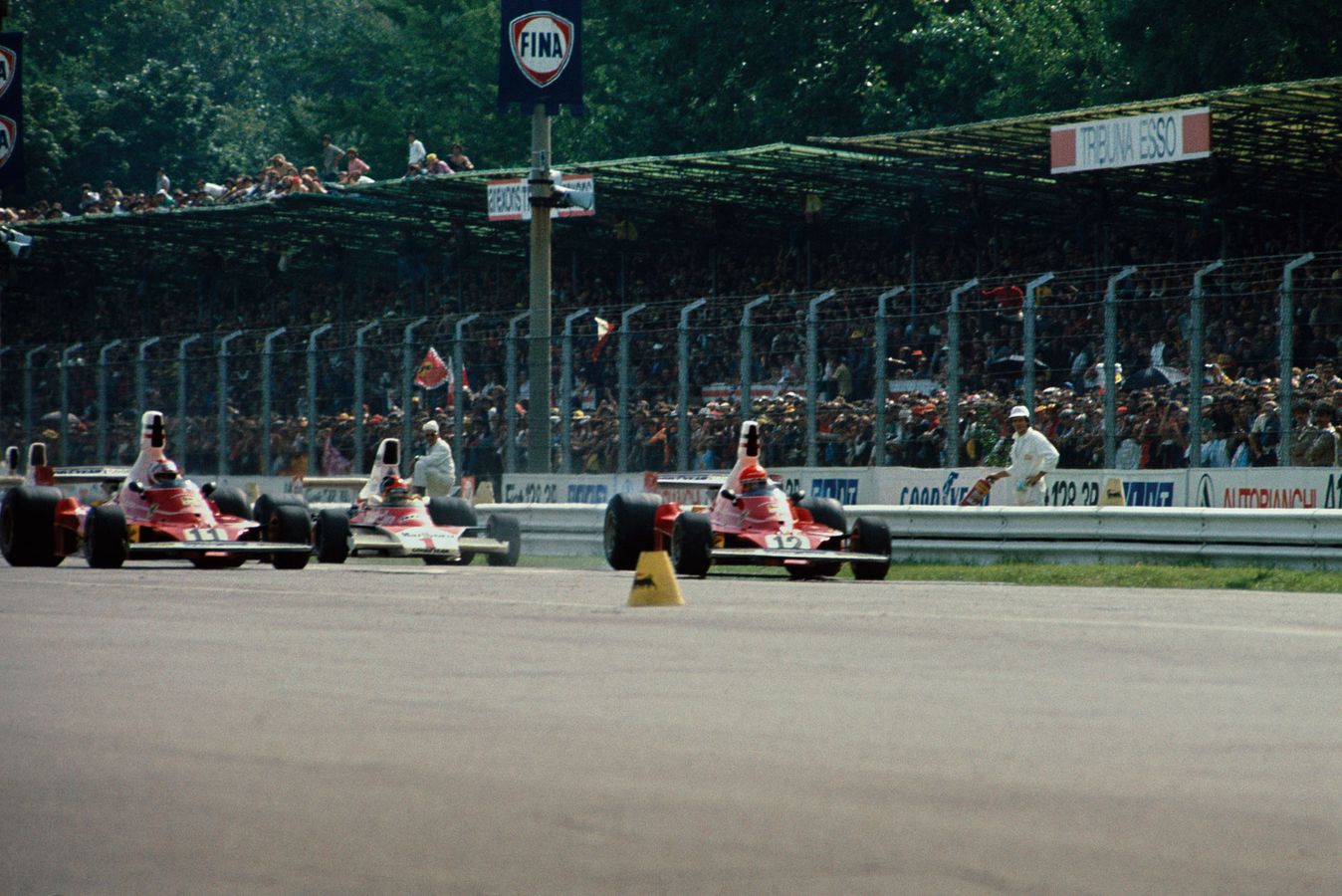 As is so often the case, the 1975 Italian Grand Prix was all about Ferrari, the two red cars lining up first and second in qualifying, Niki Lauda just ahead of Clay Regazzoni. But just behind them, in P3, was Emerson, whose McLaren M23 had proved both fast and well-balanced on Monza’s famously flat-out curves that Saturday afternoon.

At the start the two Ferraris powered off the line first and second, Clay nipping past Niki as they swept into the Curva Grande on lap one. By contrast Emerson made a mediocre start, dropping to sixth place behind his McLaren team-mate Jochen Mass, Jody Scheckter (Tyrrell) and Carlos Reutemann (Brabham).

Carlos, who had qualified only seventh, was on a charge, passing Jody and Jochen in short order and setting off after the two Ferraris, which were circulating nose to tail at the front of the field.

But, as Carlos had been slicing his way through the pack, Emerson had been matching him, move for move. By one-third distance Emerson had forced his McLaren onto Carlos’s Brabham’s tail, and he duly barged his way past the Argentine as they powered through the Lesmos together.

Emerson was now on a charge, and began to catch the Ferraris at a rate of knots. As the race entered its closing stages, he had caught Niki, and a few laps from the end he passed him. Clay, however, remained out of reach, scoring a win very popular with his adoring tifosi. Emerson was second, and Niki third, scoring world championship points enough to earn him his first world championship.

“My car was really fast in the last third of the race, and once I’d passed Carlos I could really attack that magnificent racetrack,” said Emerson afterwards. “But Clay was having one of his ‘on it’ days, and, although I was able to catch and pass Niki, I couldn’t do anything about Clay.”

His name is Emmo

Getting to know McLaren legend and Indy 500 winner Emerson Fittipaldi