VOICEOVER:
His name is Emerson Fittipaldi

The first Brazilian driver to have a dream

EMERSON FITTIPALDI:
My dream was - I hope one day to start a Grand Prix

VOICEOVER:
And he did, but he had to fly to England to do it

EMERSON FITTIPALDI:
I was 100% focused

VOICEOVER:
He was focused, and fast

against legends like Stewart, Hill, Lauda, Scheckter, Hunt... you get the picture!

There was a lot of girls around...

beautiful looking girls coming to the track and looking for the Grand Prix drivers, it's part of the sport

VOICEOVER:
Formula 1 in the 1970s wasn't always so simple

This was an era when danger and death were commonplace

EMERSON FITTIPALDI:
From the beginning of my Grand Prix career to my indy career, I lost 37 friends

I knew there was a very high risk

EMERSON FITTIPALDI:
There was so much motivation, so much enthusiasm, so much teamwork and effort to think McLaren had the potential to win the World Championship

VOICEOVER:
In 1974 the title fight was on, and it went right down to the wire

A fight between the sports two biggest names, McLaren and Ferrari

EMERSON FITTIPALDI:
There was a tremendous pressure on both teams

Some drivers, you always have to be extremely careful, Clay Regazzoni is one of them

EMERSON FITTIPALDI:
My front wheel was next to Clay's cockpit when he tried to push me out of the track

and I just turn the steering wheel and I pushed Clay... we went side by side to the end of the straight

I was on the inside line, I'd got the lead and I won the Championship

If you think about when Bruce McLaren started the team, to all the World Champions that went through McLaren

I am this little part of this huge story, and so grateful

VOICEOVER:
No, Emerson, we at McLaren are grateful, and so are the rest of the world

His name is Emerson Fittipaldi

As our exclusive commemorative video explains, however, when the 1972 Formula 1 world champion joined us for ’74, there were few cast-iron assurances that he’d be able to achieve another title.

The Cosworth-powered M23 may have been a canny little car, and McLaren may have been a respectable F1 outfit, but it had yet to fully deliver on its promise, having only achieved eight grand prix victories in the eight seasons since the team had first gone Formula 1 racing.

To all intents and purposes, Emmo was taking a gamble – albeit a well-considered one.

In fact, it turned out to be a clever and inspired move. He later admitted that he’d paid close attention to the on-track performance of the M23 while he’d been pondering his Lotus future throughout the summer of 1973. That year, the McLaren had been principally driven by Denny Hulme and Peter Revson – and young Emerson had been duly impressed by the car’s high-speed balance and tractability. 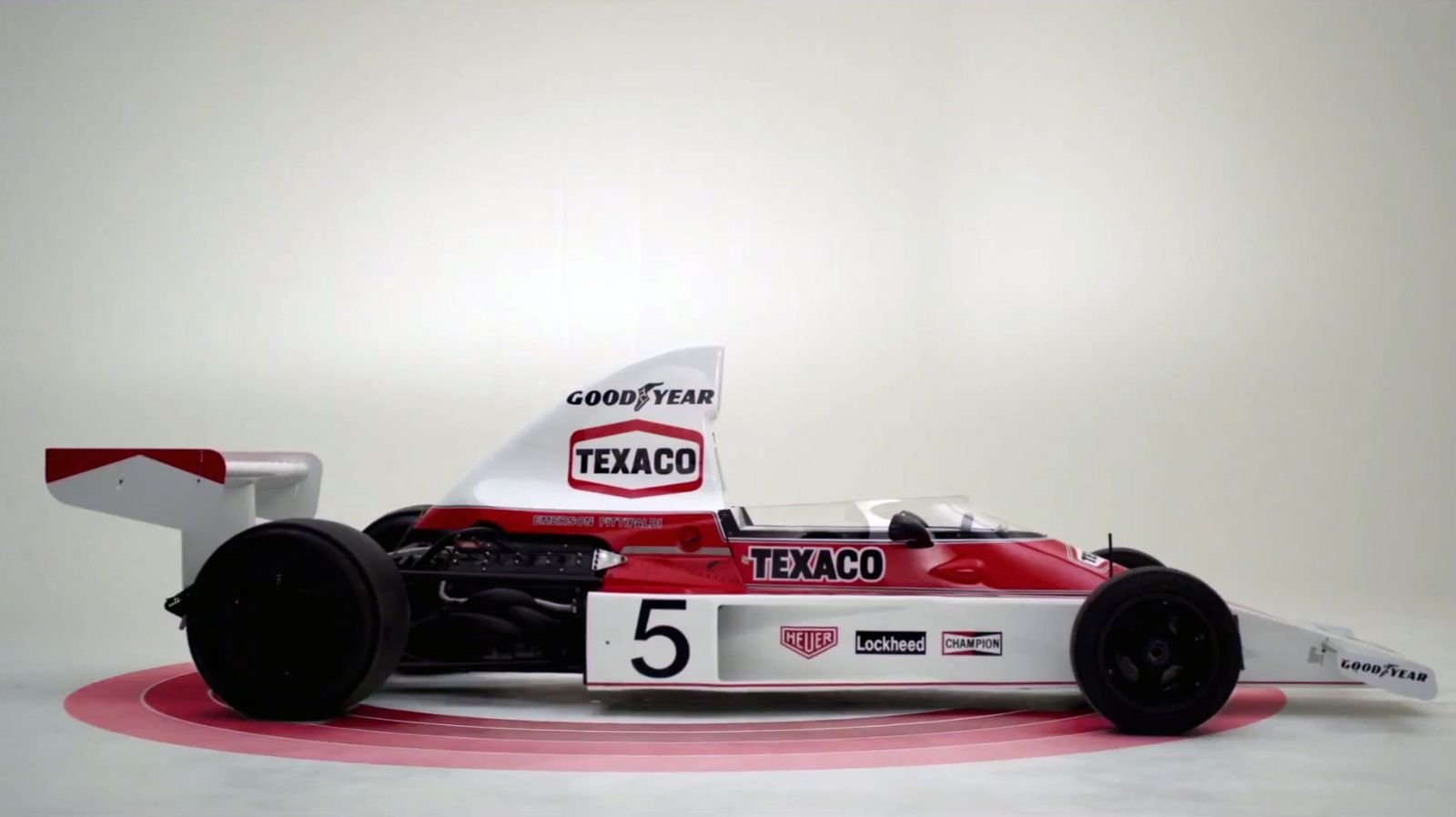 For ’74, the M23 would once again prove the perfect racing car. And Emerson’s switch to McLaren brought with it considerable backing from both Texaco and Philip Morris Tobacco, giving the team the financial muscle to move into the big league, and sparking the beginning of the classic red and white livery that went on to star in Formula 1 for more than 20 years.

That year’s title battle was an absolute nail-biter – Emerson spent the year locked in a battle against Tyrrell’s Jody Scheckter and the Ferraris of Niki Lauda and Clay Regazzoni.

Fittipaldi and Regazzoni went to the final race of the season, held at New York state’s Watkins Glen, both tied on 52 points. It couldn’t have been closer. Scheckter, meanwhile, lurked behind on 45 points – still in with a shot at the title if his two rivals should falter.

The weekend started problematically for the McLaren driver: “I’d always loved the Glen,” he said. “But, as hard as I tried on Friday and Saturday, I just couldn’t find a set-up that felt either quick or comfortable. Jody qualified sixth, I qualified eighth, and Clay qualified just behind me, ninth.

The odds were stacking up against him, and Emerson was feeling the pressure: “I was worried,” he admitted. “In fact I think it’s fair to say that I’ve never felt as much pressure in my life as I felt, lying sleepless in my hotel room, the night before the race. There was tremendous pressure on me and the team. It was a critical atmosphere. The sponsors had great expectations.

In a move typical of many racers who are clambering towards the summit of the world championship, he threw caution to the wind, attacking Regazzoni on the very first lap. 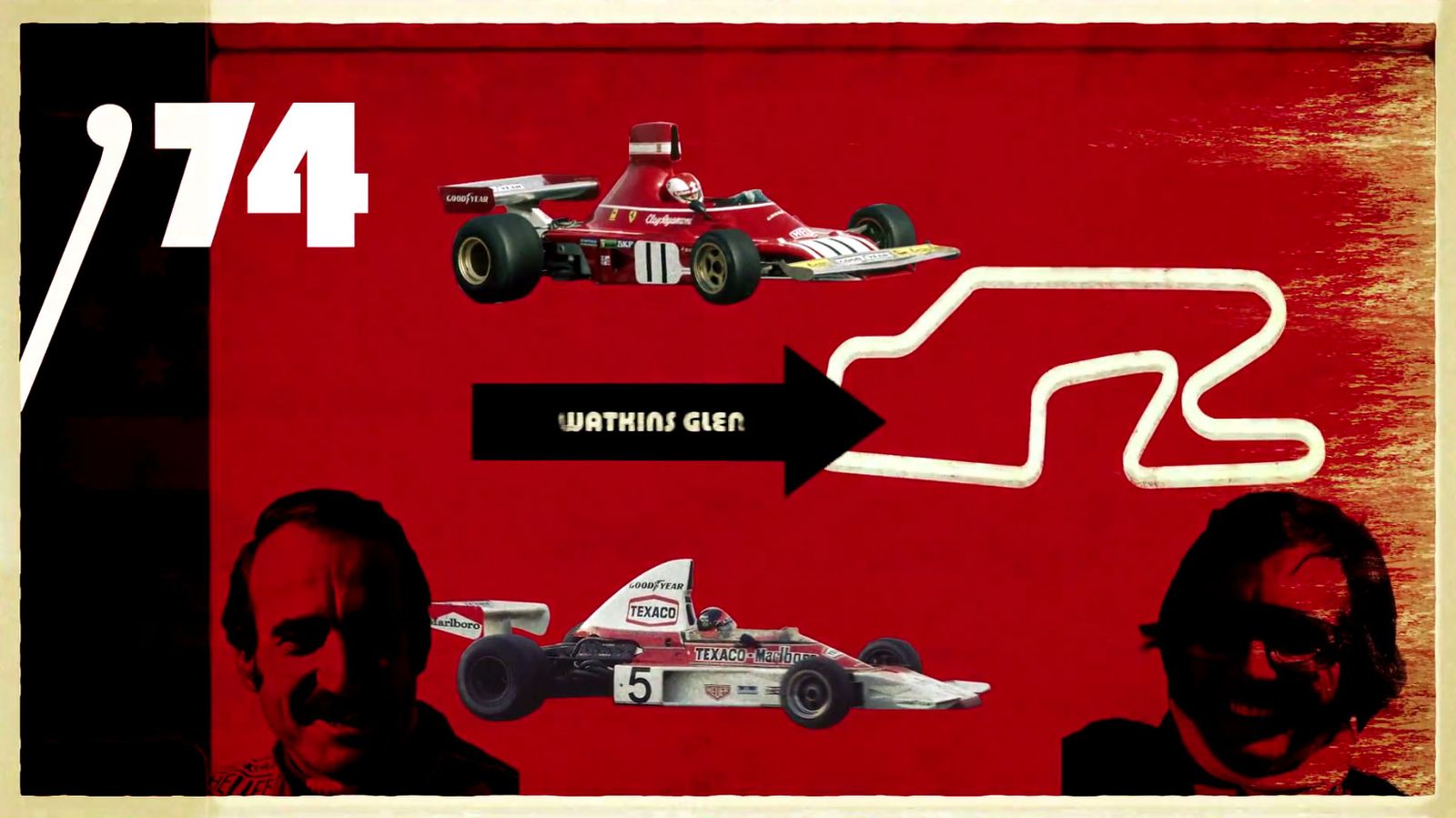 “As the flag waved, Clay got a better start than I did, rounding Turn One, a 90-degree right-hander, just ahead of me. But, on the long uphill run towards Turn Two, I managed to slot into his slipstream, and I felt that wonderful feeling that all racing drivers know so well: a draft, sucking my car forward.

“As we were both hammering along the straight towards Turn Two, another 90-degree right-hander, my McLaren’s nosecone began to creep closer to Clay’s Ferrari’s gearbox, and I remember thinking to myself, “I think I may be able to pass him here, and if I do I’ll win the World Championship.

“But Clay was Clay. He wasn’t like the rest of us. The rest of us often described Clay’s Ferrari as ‘the widest car in Formula 1’, and that was because he’d swerve all over the road in front of you rather than let you pass. Now, as I followed him, feeling all tensed up inside, I could see his distinctive red-and-white helmet bobbing from side to side, as he looked in his mirrors, clearly ready to execute one of his famous chops whenever I made my move.

“His Ferrari drifted towards the middle of the track in front of me. I followed in its wheel-tracks. I was only a couple of metres behind him now, and I was still gaining on him, and very soon we’d both have to brake for Turn Two. But on which side should I try to pass him – left or right?

“I feinted left – and, watching his mirrors like a hawk, Clay saw me and did the same. I’d expected exactly that – so, as soon as he jinked his Ferrari left, I immediately jinked my McLaren right. I’d done it. I’d sold him a dummy. I was nearly alongside him now, on his right-hand side, and gaining, and I had the inside line for the upcoming right-hander.

“But, as I say, Clay was Clay. He veered to the right, even though I was almost level with him by now, and I had no option but to do the same. I was on the extreme right-hand side of the tarmac now, but Clay kept coming. He got closer and closer, and I had to move even further to the right, putting two wheels on the grass. 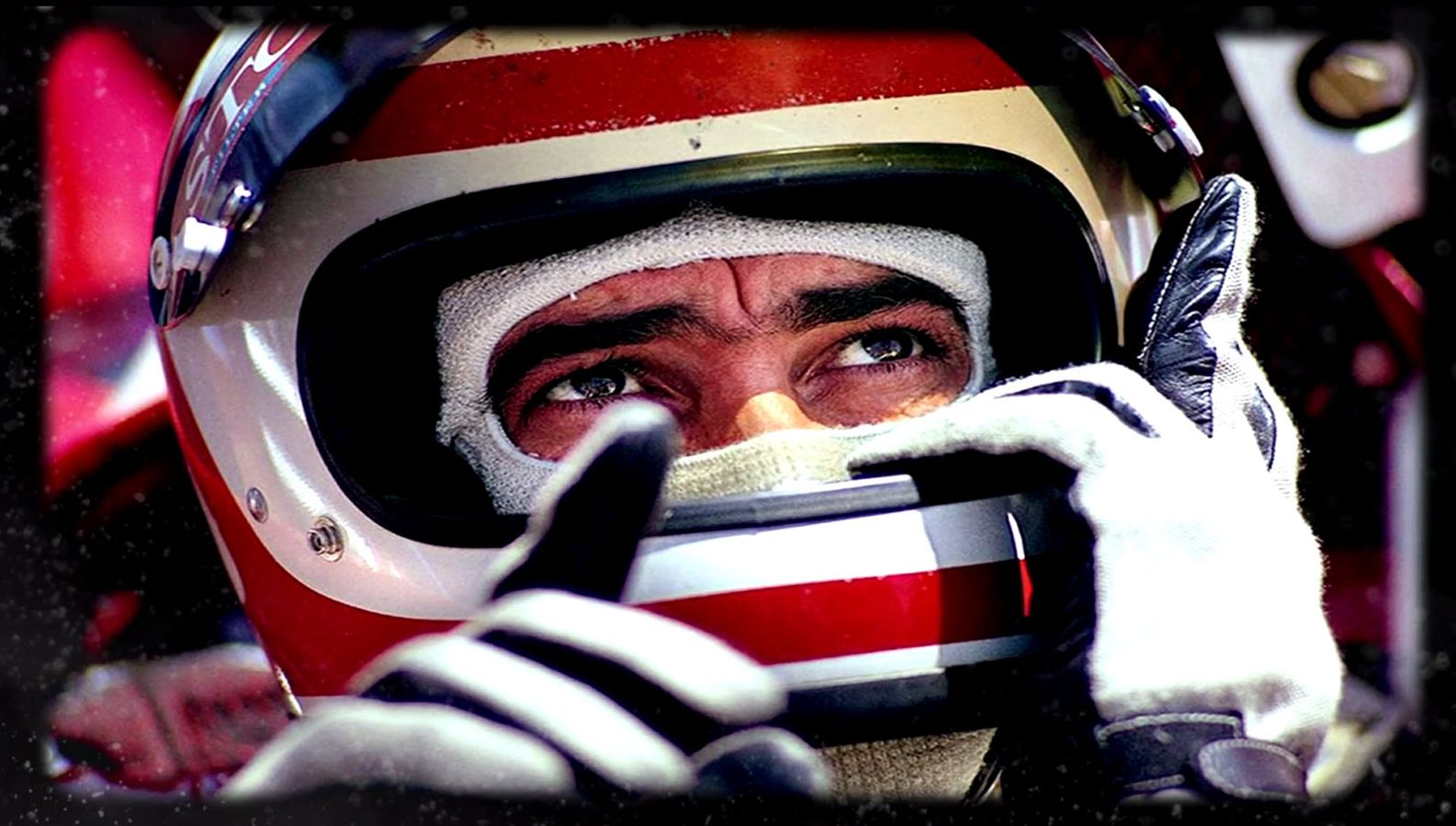 “I looked over, and he did the same. I wasn’t going to back off now, because I’d won the corner fair and square, and I think he suddenly understood that. So, as we both stood on the brakes, he moved ever so slightly to the left, to avoid a shunt, and I scrambled around the inside of the corner, got the power down well on the exit, and pulled ahead. Through Turns Three and Four I increased my advantage. ‘If my car doesn’t break, I’ll win the World Championship,’ I remember saying to myself.

“It didn’t break, I finished fourth, and Clay slipped back to 11th. Jody failed to finish. I was world champion – my second championship and McLaren’s first. It was one of the best days of my life.”

McLaren’s first world title silverware may now sit alongside a further 19 championship trophies, but it still represents a special time in the history of the squad. Emerson’s title conferred upon the team a prestige, belief and momentum that it has barely failed to shake off over the following decades.

At McLaren, we’re hugely proud of Emerson – and always have been. He’s that rarest of things, a genuine legend who possesses a grace and humility that put lesser names to shame.

Our exclusive video pays tribute to not only McLaren world title, but tips its hat to the man, the myth and the legend that is Emerson ‘Emmo’ Fittipaldi… 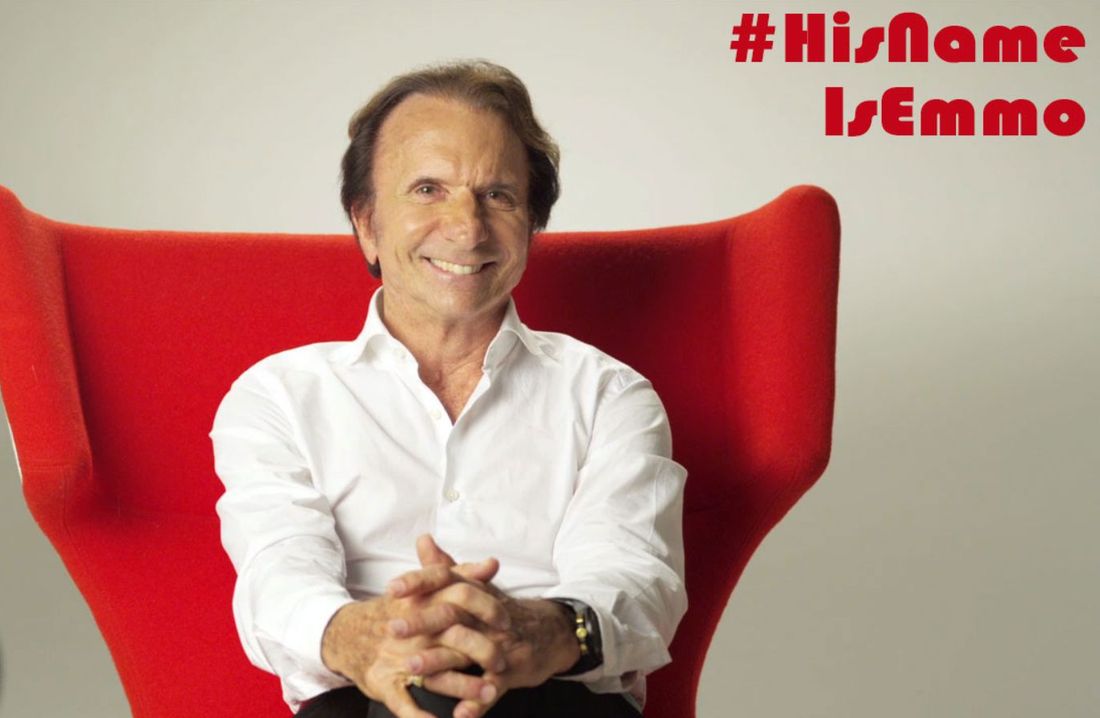