As testing continues in Barcelona, we take a moment to hear from former driver, Brian Redman

As testing continues in Barcelona, we take a moment to hear from former driver, Brian Redman

Brian scored points on two of his three World Championship starts with McLaren in 1972, but, over four decades on, the Lancastrian still believes that he could have done better.

My first experience with a McLaren was in Formula 5000 in 1971. I had retired to South Africa at the end of 1970, thinking I was going to be killed, and I came back after four months. I’d given up the Gulf Porsche drive – Derek Bell took my place and he never looked back!

In 1971 I had no drive other than Sid Taylor’s McLaren M18 in F5000. We had a couple of wins at Brands Hatch, but we struggled with it. It was pretty hard work, and then Frank Gardner arrived with a lightweight Lola built on an F2 chassis.

He and I had an almighty collision at Snetterton. I had a good start and was in the lead, I saw him closing, closing. We arrived at the hairpin at the end of the main straight and I went to the inside. He came round the outside, and so we went around side by side. Off line, off the track, it was still  airport runway paving. Frank was alongside me as we got to the Esses, and he started bouncing – he hit a bit of rough concrete, and bounced into me. So we both went head-on into the banking going into the Esses. His Lola was destroyed, and he’d broken a rib, but my M18 only broke its front suspension. Frank’s only words as we walked back were, “That was a hard one…!”

After winning at Brands in April, we went back in September. I was leading from Frank with about four or five laps to go and at the left-hander behind the pits the car gave a mighty lurch. I looked in the mirrors and saw that the top link on the right rear suspension had broken. So the right rear wheel had no directional stability. But I kept going, and I managed to win by half a second or so.

We went back to an older M10B in 1972. However, at the end of 1971 I’d asked Derek Bennett if he could build a F5000 Chevron, and he said he could. I said, “How long and how much?” He said, “Ten weeks and whatever it costs me!” I paid Derek £3000 for the chassis, and Sid provided the engine and gearbox, so we replaced the McLaren with that. My last race with the M10B was the Dublin GP at Mondello Park, in April, which I won.

That year I was also asked to join the McLaren F1 team for the races when Peter Revson was busy in Indycars, starting in Monaco. The invitation came from Phil Kerr, who was a great guy. Teddy Mayer was very good, but he was quiet, he didn’t say much. My team mate was Denny Hulme. I had had several run-ins with him over the years. He wasn’t called The Bear for nothing! We never had any happy words, I can tell you.

The M19 was a great car, I loved it. Unfortunately for me the whole McLaren episode was a disaster, really, although the team was terrific.

I finished fifth in the wet at Monaco. At the time the Firestone wet weather tyre was much superior to the Goodyear. We were on Goodyears – Jackie Stewart was first of the Goodyear runners, and I was second. I’d also had a puncture, so I’d stopped to change a tyre. So it was a good drive, but not great.

However, the French GP at Clermont-Ferrand was a disaster. I’d never been there before, and in practice made a mistake and hit the barrier, although not too seriously.

We were staying in a very old hotel, which had a lift like a birdcage, you could see through it. I was on the top floor and on the Saturday night I went to get in it, and all the McLaren crew were already there. One of them shouted, “Bet you can’t beat us down!”

A challenge is a challenge, so I went hurtling downstairs, watching the lift. Five steps from the bottom I tripped and went flying. I wrecked my right ankle. The race was the next day, and I couldn’t get my racing boot on – I had to cut it to get it on! So I just drove around. It was bloody awful! 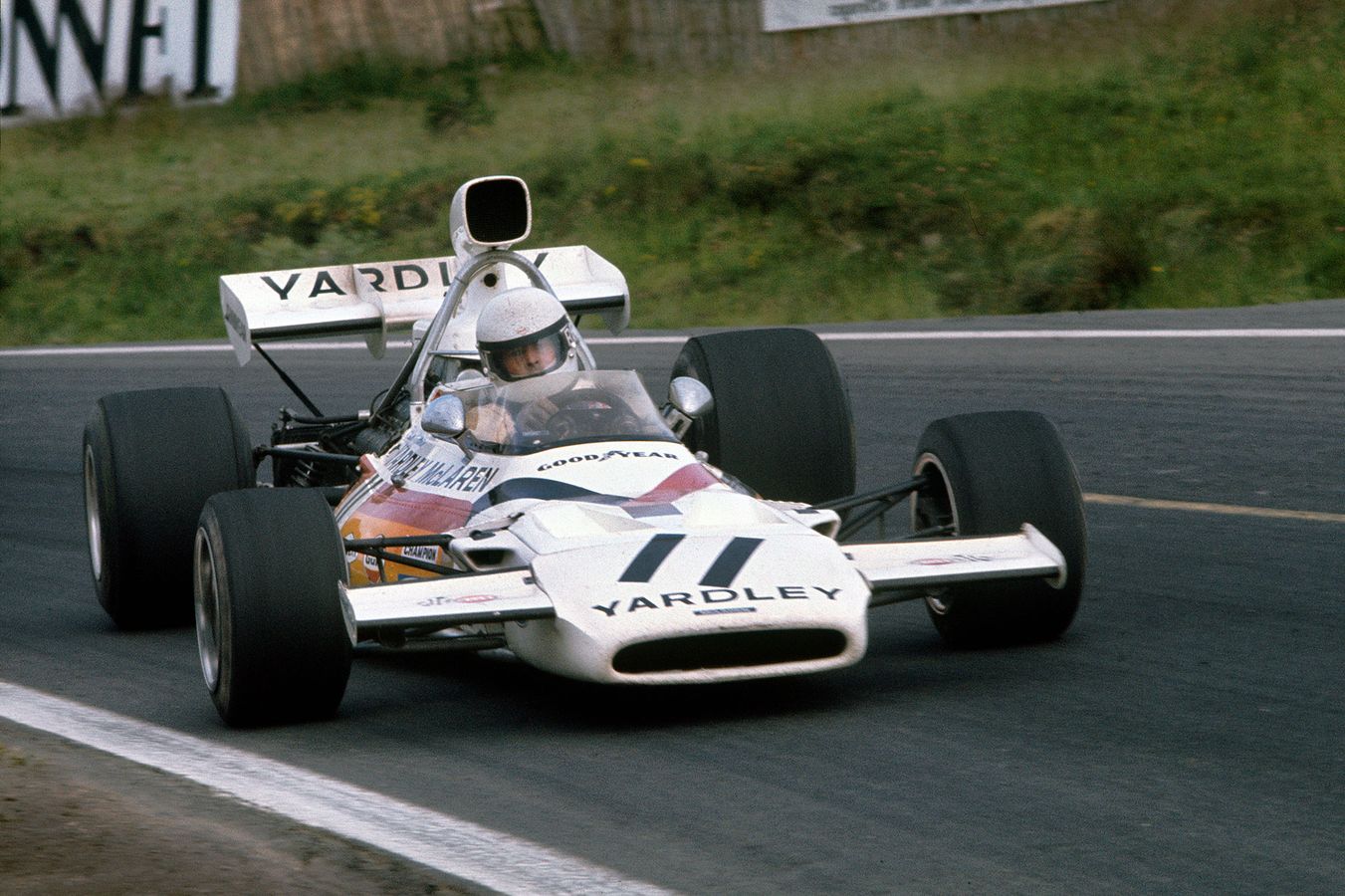 I knew the Nurburgring very well – I knew every inch of it, and I liked it – and I’d won there in the Chevron B16 and Porsche 908/02. But at the German GP I made a mistake in qualifying. I did several slow warm-up laps round the loop at the back of the pits. I set off on what I thought was going to be a flier, and the tyres weren’t warm enough. It went sideways coming out of Turn One, and into the barrier pretty hard. For the race I just drove round, I had no spirit at all. I finished fifth, but I should have been top three.

In August we had the Rothmans 50,000, a one-off Formula Libre race with a mixture of F1, F5000 and F2 cars. I qualified second and Phil Kerr said, “Just be careful, because Fittipaldi’s Lotus will break.” Well, the Lotus didn’t break, so I finished second to Emerson, but on the same lap.

At the end of the year there was another non-championship event at Brands, the Victory Race. In those days money was tight, and my right boot had a hole in the sole which I’d neglected to repair. Part way through the race I came hurtling into Westfield, went to brake, and I couldn’t get my foot off the throttle, because the pedal had gone through the hole in my shoe! Another crash, serves me right...

So it was all a disaster, really, the whole thing. It was nothing to do with McLaren. It was a fantastic team, the car was brilliant, the people were all brilliant. The only thing that wasn’t brilliant was me. I never had any F1 race where I felt that I’d really done a good job and done the best that I could, under whatever circumstances. I would rather forget about my whole F1 career, such as it was!

After that, in 1973-’76 I raced in America in F5000, with Jim Hall and Carl Haas, didn’t crash much at all, and won three successive championships.

At the end of ’73 I was invited by Don Nichols to drive a third Shadow in the US GP at Watkins Glen, and I handily out qualified their two regular drivers, George Follmer and Jackie Oliver. Don said, “Would you like to do F1 next year?” I thought about it and said, “I’m staying with F5000, I’d rather be finishing first, second or third than in the middle of the field in F1.” And of course the driver who took that place in the team was Peter Revson, who was killed at Kyalami in 1974.

Just after that Carl Haas rang to say the F5000 series was cancelled, and a day later Don Nichols called to see if I’d reconsider F1. With no other drive available, I accepted, and replaced poor Peter.

Having completed the Spanish and Belgian GPs, at Monaco on race morning Carl rang to say the F5000 series was back on. So I told Don this would be my last F1 race. The driver who took my place, Tom Pryce, also died at Kyalami in a Shadow three years later.

Better to be born lucky than rich…

Exclusive insight into the driver's time at McLaren