Adjusting to a new racing discipline is never easy, even when you've got a CV the size of Tanner Foust's.

Ahead of the fourth round of the Extreme E season in Chile, on 23 September, we caught up with the experienced American racer over a Webex call to get the lowdown on his start to life in the all-electric series.

We discussed the opening three rounds of the campaign, his transition into the McLaren Racing family and looked at how his learnings from the season so far have readied him for the next round.

Ahead of the fourth round, how do you think the season has gone so far?

The season has been a steep learning curve so far. We've had good performance and pace, but with such little driving per race weekend, any mistake, mechanical issue, or even just a bad start can set a negative tone for the entire weekend. Gathering points is not necessarily a matter of being the quickest all the time but being consistently in the top three or four. I think we've been able to get the pace, but we haven't been able to do it consistently enough. We've also had two rolls in three events, and some mechanical glitches with the driver changes that have cost us. Those are the types of things that you need to iron out to get consistent points. 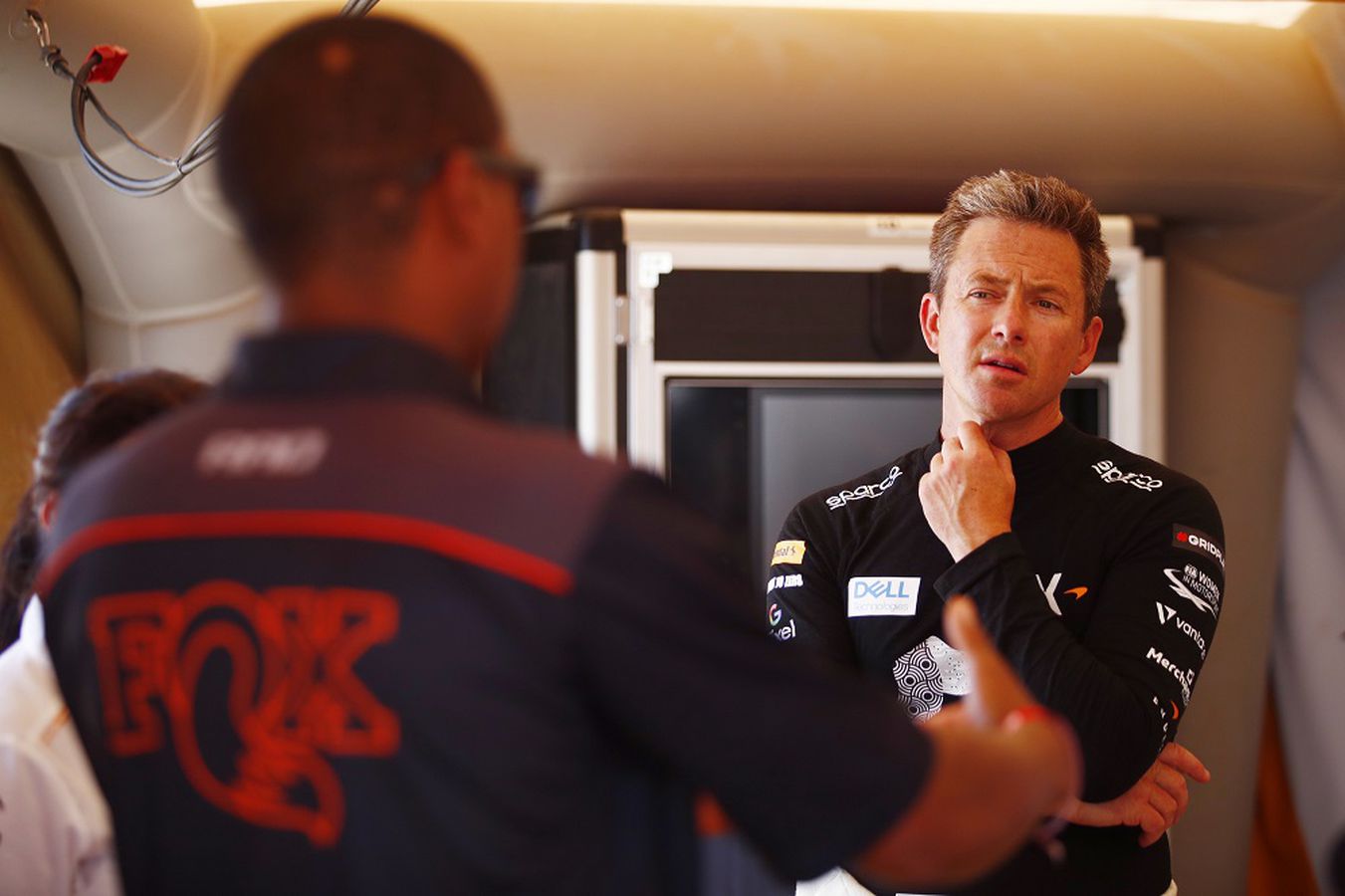 Following the roll in Round 1, the car was rebuilt with an upgrade package installed. How did these fare in Rounds 2 and 3?

I thought the upgrades were a move in the right direction for the series. Ultimately, the challenge for the vehicles is substantial. They come onto a terrain that's usually not meant to be driven on and certainly not meant to be driven on at the speeds these Odyssey machines can carry. With a very limited amount of suspension travel and a fairly heavy truck, a lot is being asked of these vehicles. The new suspension has definitely upped the game for the Odyssey. All the teams have been getting their heads around that suspension, and I think they all used the double-header in Sardinia to make great strides in utilising it, including us in the McLaren.

How does Extreme E compare to other racing series you've competed in?

Extreme E is an interesting mix of the different disciplines I've competed in. There's an element of endurance off-road racing and Baja with the terrain. There's an element of rallycross in its sprint nature, the side-by-side starts and the dust. And there is an element of rally racing with the learning of the courses and making pace notes for a track that you have very limited exposure to before race day. It's not the same as any one discipline, it has some pretty challenging elements of three or four different disciplines packed in. 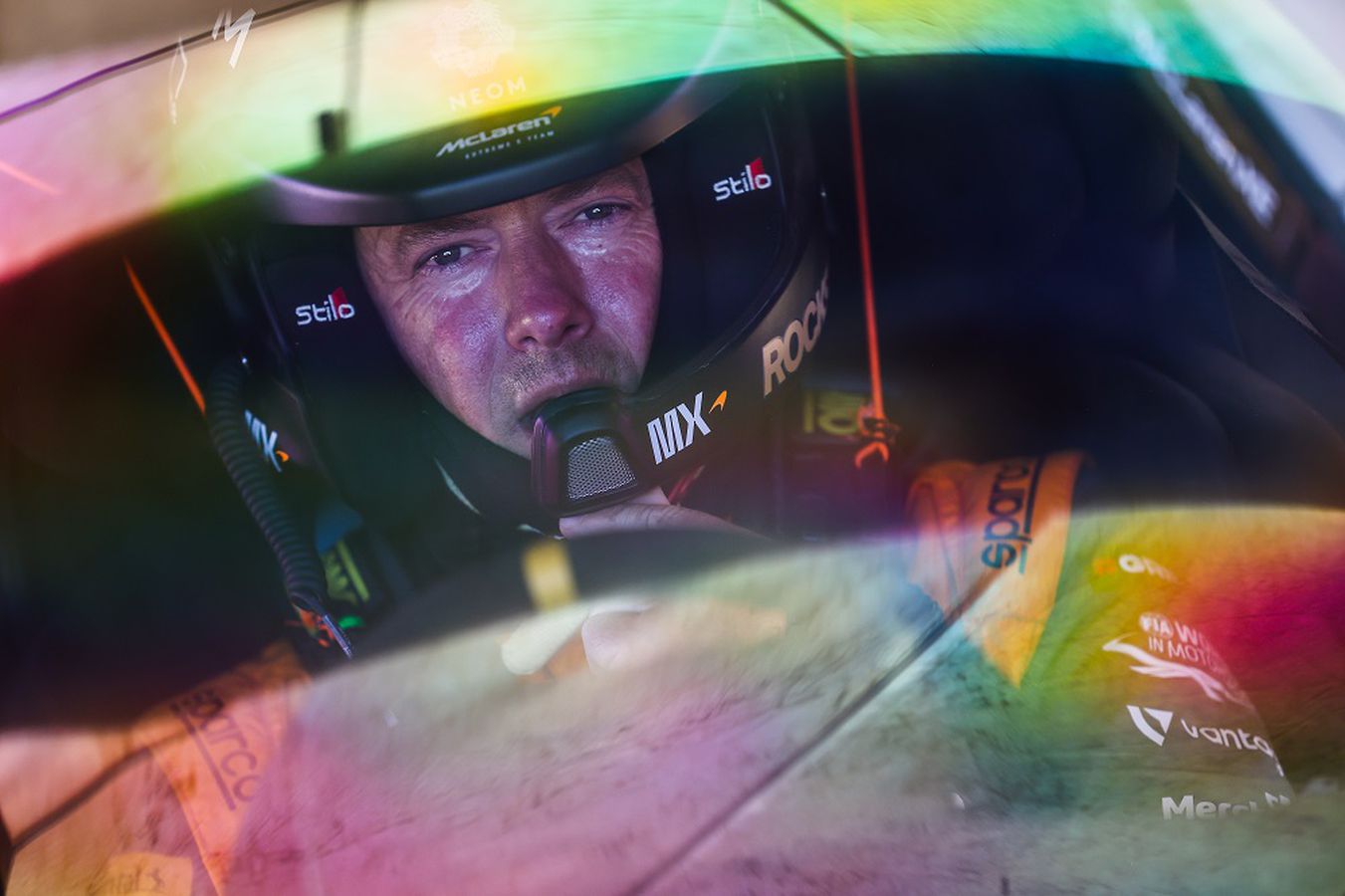 How has your previous racing experience benefitted you?

For Extreme E, my most beneficial experience is Rallycross.

The start is 70%, 80% of the race, so it's critical to get a good start and to get in front because we have found that dust is a significant factor in your race performance. Being in front, you can go much faster than the cars behind you. Reading the road and the terrain and dealing with off-road surfaces in my past have helped with setting up this vehicle.

Working with Leena and Teena Gade has been amazing. The entire McLaren team is on it from day one and always brings their A-game, and for such a short weekend, that is absolutely critical. Getting our setup sorted in such a short space of time is one of the most important parts of the weekends, and that taps into some of my Baja and off-roading history and the need to shortcut some potentially long setup times.

Having a teammate that you are sharing a car with is something that I have never experienced before. You have to think about each other's concerns with every single move that you make. Being able to work together and come to an agreement can be a huge benefit. There is a lot of communication off the track between Emma Gilmour and I in order to understand the vehicle much more than I would normally do if it were only myself.

You have to discuss every single aspect of the vehicle, from how much steering feedback there is, to how much traction control you're running and all of the suspension settings, so that everybody is on the same page moving forward and everybody is comfortable with the car and can push it to the limit. 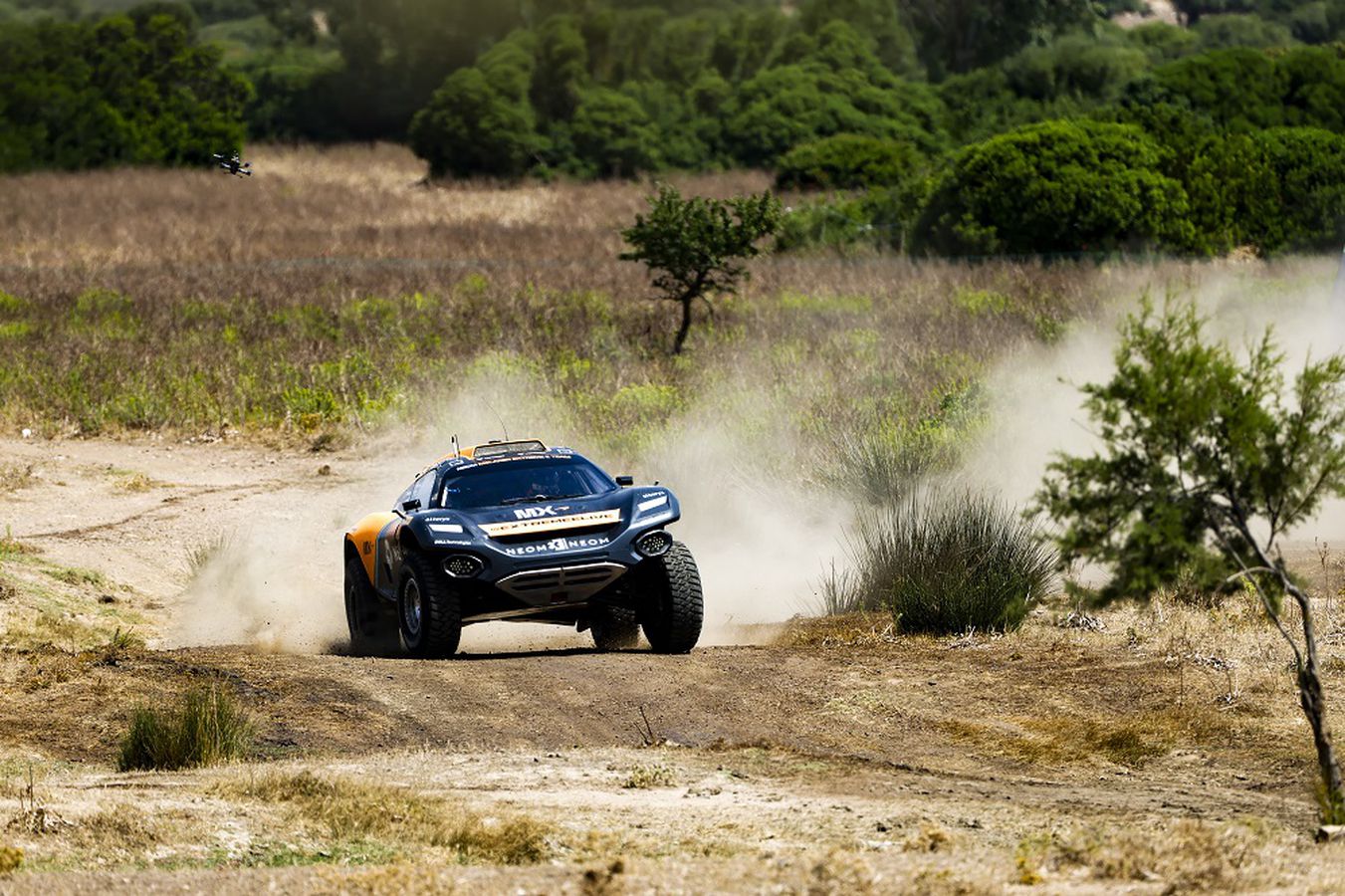 With that in mind, how you have found working with Emma?

Emma is great to work with. She's a great driver, a strong communicator, and knows what she likes in the car. In off-road racing, the driver's preference and feel of the car can be hugely different to what a simulation might anticipate, as you never truly know what the conditions will be like. Emma and I work well together and are getting better.

As a driver, I have never really listened to how other drivers communicate with their engineers, apart from my teammate. When I was at the Formula 1 race in Hungary, I was listening in to Lando and Daniel giving their feedback to the engineers and their way of communicating virtually the same thing was so interesting. It just shows that driver and engineer relationship, and the ability to speak the same language and be on the same page is so critical.

Naturally, Emma and I discuss the same things, but in entirely different languages, so we're trying to come together and meet our languages in the middle before we go to Leena and the team, so that what we are telling the team isn't overly complicated and they don't have to decipher what we are saying. I think that how you communicate your feelings in the car as a driver has a lot to do with the relationships you've had in motorsport in the past and the teams and people you have worked with. Leena has been incredibly adaptive to the different ways that Emma and I talk about where we'd like the car to go.

How much have you enjoyed working with McLaren as a team so far?

I love Leena and Teena as a team, they are awesome. Teena has all of the data right at her fingertips. Any question you ask, she has already asked that question herself and come up with the numbers to back up an answer. Leena takes this chaotic sea of data and channels it in the direction you need it to go, so they work so well together. We're all learning together as a team coming in here for the first season. 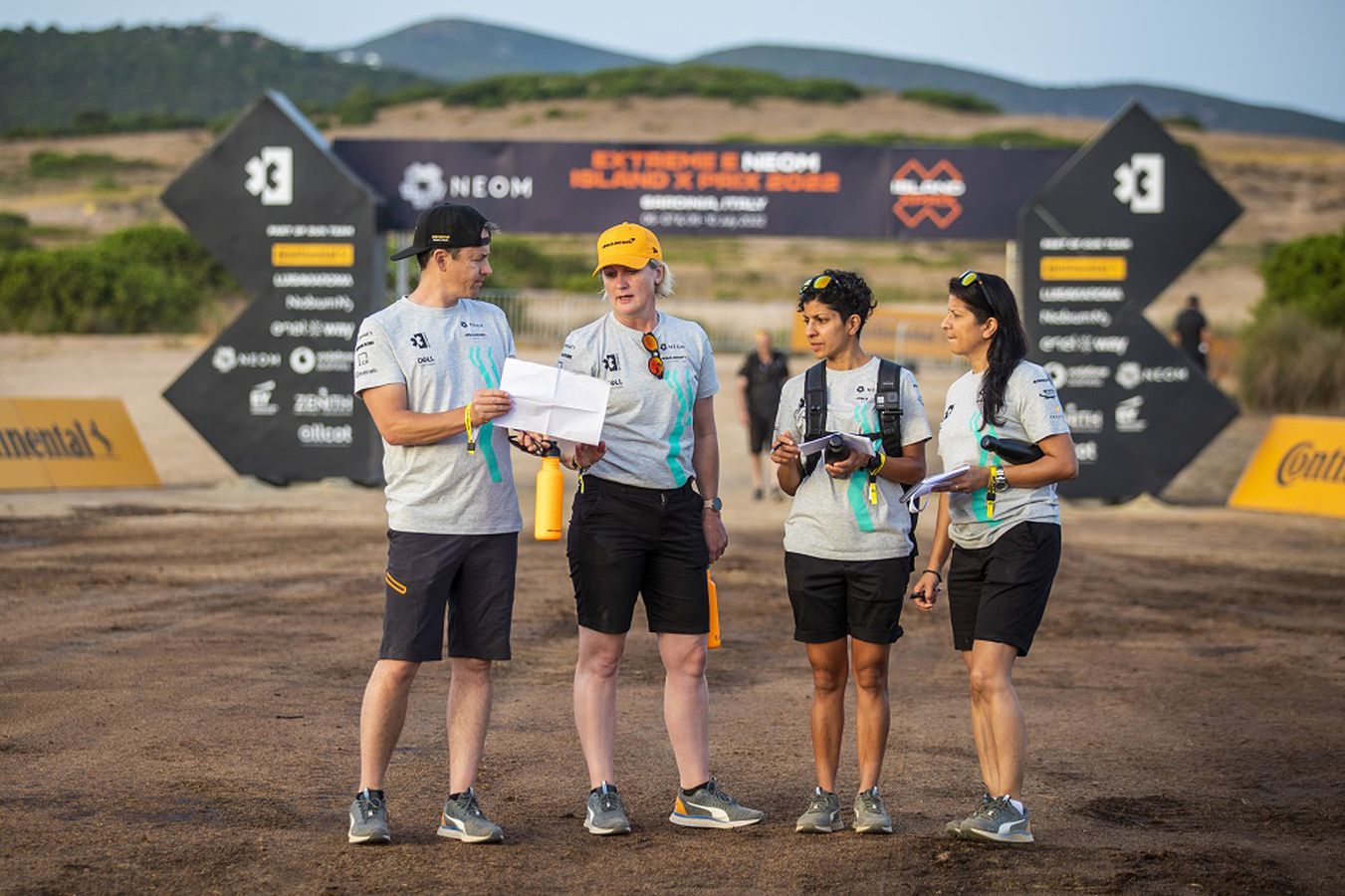 Looking ahead to the next round in Chile, what do you think we can expect from there?

I have researched Chile. I've looked at the videos and Google Earth and found all of the information that I can possibly track down. From what I can see, it looks quite flat and quite dusty. I think the weekend's main theme is finding clean air, whether that means getting out in front at the start or having an alternate line during the race. Finding clean air where you can see will be the most critical part of the weekend.

Even when you can see, you're incredibly committed, so when it is completely dusty, you have to rely on your muscle memory of how long to stay on the throttle and roughly when you break. It's impossible to relay that to somebody who hasn't experienced it. If you were to put a time on it, you would be more than 30 seconds slower in the dust than in the clean air on these tracks in a four-minute lap. I'm fairly used to the dust, and I was used to staying full throttle through it, but the worst-case scenario happened when the car in front of me had an issue in the dust and hit the brakes, and so without seeing that car, I hit it, and that caused the first roll. 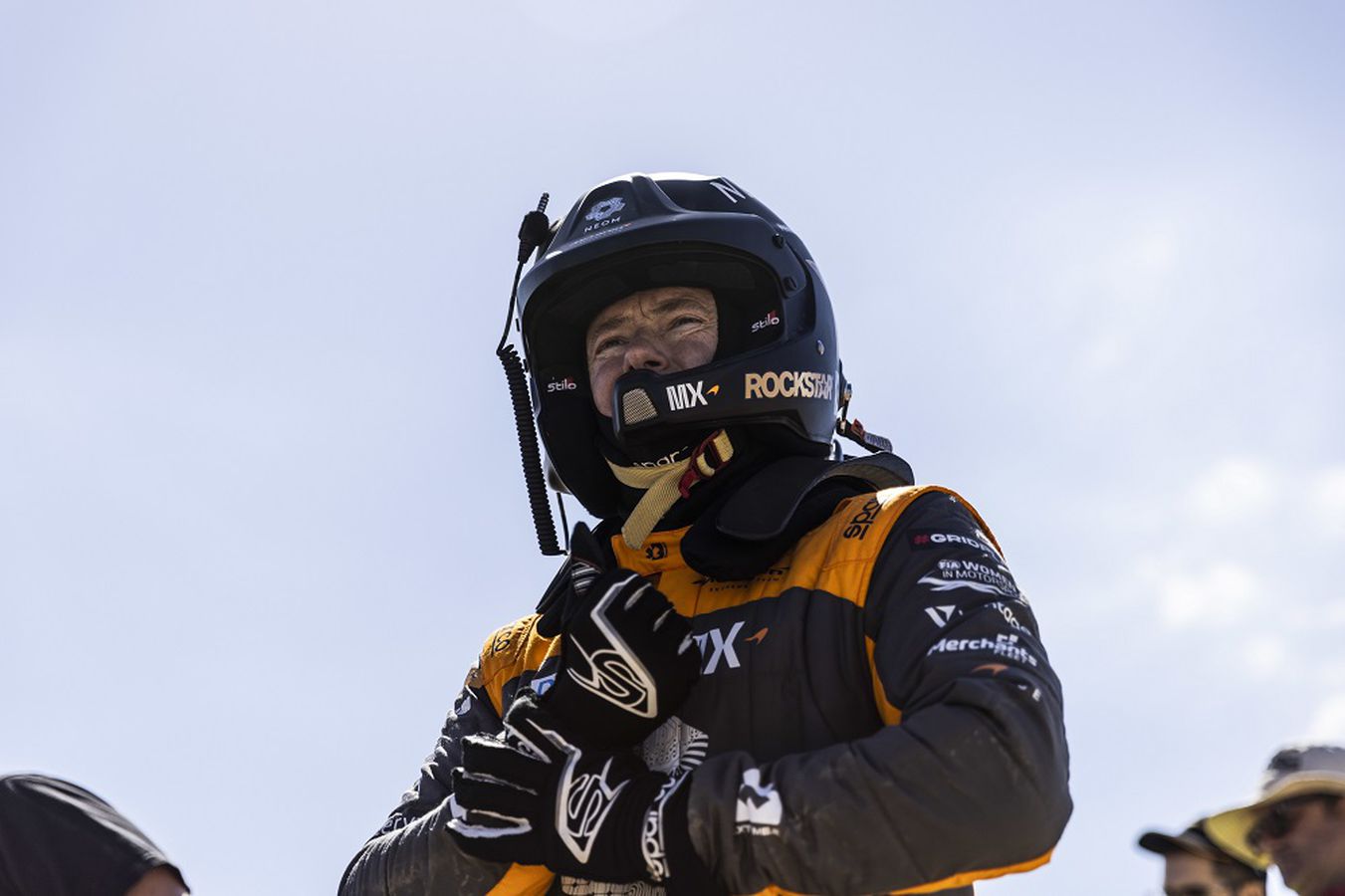 Finally, what have you learned from the season so far that you can take into the next round?

The main thing is that we are consistently learning. There's very limited test time, and we've only had a few days in the car, so your learning curve is very steep during the race weekend, as you only drive the Odyssey four or five times. I think we are narrowing down our understanding of the vehicle dynamics of the Odyssey so that we can make the best guesses for set-up when we get to new tracks.

There are a lot more setup options available in these cars than many cars, for example, you can actually adjust how much power goes front to rear based on steering angle, yaw rate, and lateral load, and you can adjust the power front to rear through different parts of a corner. And you have 10 traction control levels that are unlike a combustion engine traction control. Everything is unique, so we're learning every round, from a driving team operation and an engineering standpoint.

We're also learning how to communicate better as a team. You have to be focused on the various requirements during a driver change and in the heat of a battle in order to put yourselves in the best position to score points and make the finals.

Inside the Extreme E rebuild