A timeline of our relationship with that special colour

A timeline of our relationship with that special colour

McLaren’s return to the team’s traditional colour of papaya orange for the 2018 F1 season comes appropriately on the 50th anniversary of its original introduction.

It was back in 1968 that papaya first appeared on the works cars. The look quickly became associated with the McLaren name, and it was associated with successes in F1, Can-Am, Indycar racing and even Formula 5000 and Formula 2.

It took a while for Bruce McLaren to find a distinctive identity for his team. Prior to the team’s F1 debut in 1966 he asked motor racing artist Michael Turner – who had designed the marque’s kiwi badge and even helped to style the bodywork of the new M2 – to come up with a livery. At the time many cars on the grid wore British racing green, and naturally Bruce wanted to reflect his New Zealand heritage, which meant adding silver.

“The scheme we agreed on had the car with a green top decking and silver lower sides,” Turner explained. “Divided by a horizontal band of warm yellow, which spread out around the hole in the nose. When I went to Monaco in 1966 I was rather looking forward to seeing the new car, resplendent in its new colours.” 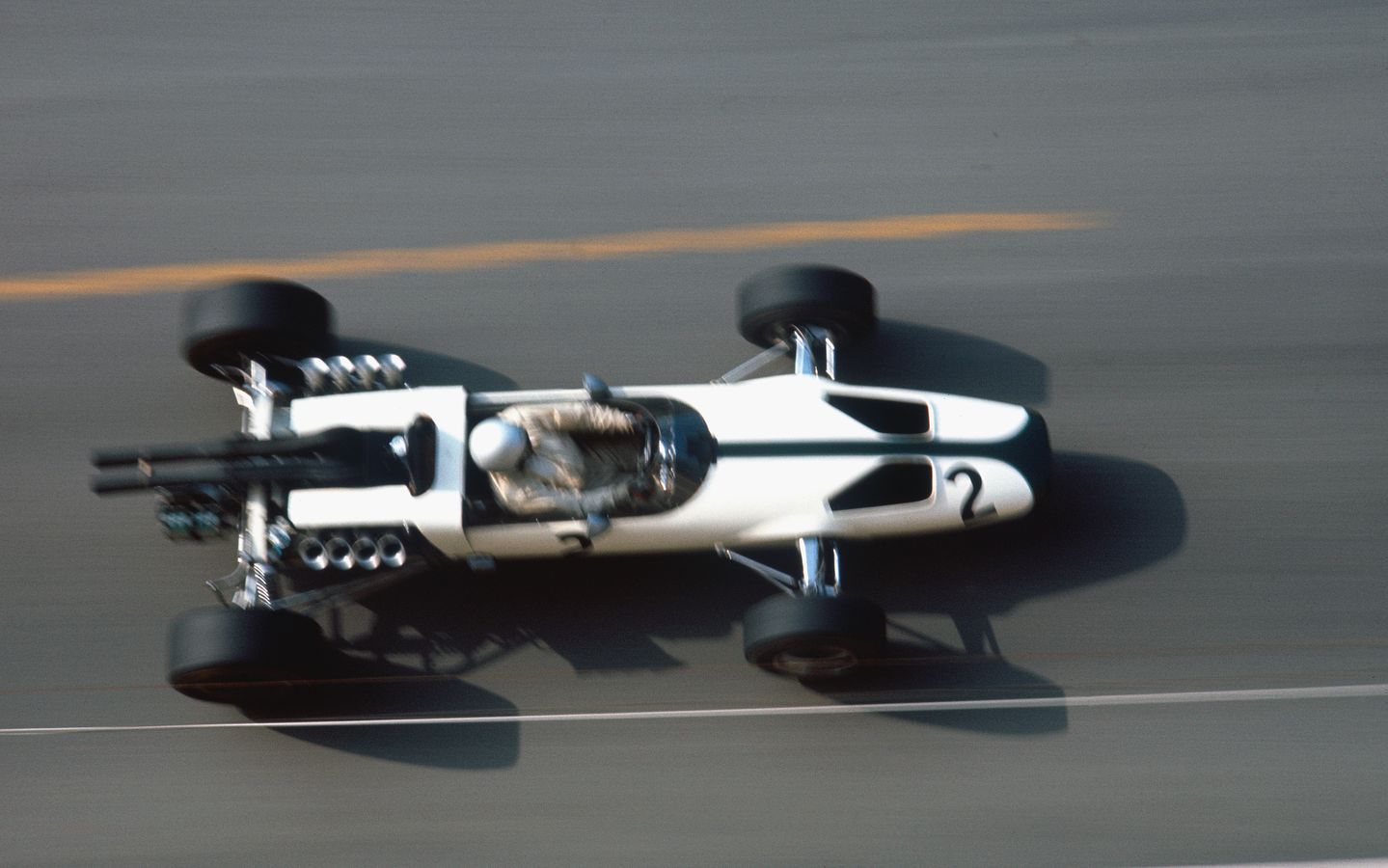 Turner was to be disappointed, however. McLaren was one of several teams to sign up with movie director John Frankenheimer to feature in Grand Prix, which was being filmed that season. As part of the deal Bruce agreed at a late stage to paint his car white with a green stripe, to represent Frankenheimer’s fictional Yamura team.

Thus Turner’s original livery was never seen, other than on the 1966 German GP poster, which he had already designed before the start of the season – and to which he had quietly added the McLaren!

After that frustrating first season, for 1967 Bruce switched to red, a colour more associated with a certain Italian marque. Indeed at Monza in September the organisers suggested that perhaps this British-built car should be green, in order to distinguish in from the tifosi’s favourite.

However, the story goes when Bruce qualified third, ahead of the sole Ferrari of his pal Chris Amon, the promoters decided that they quite liked the idea of having a crowd-pleasing red machine on the three-car front row!

In fact, just a week earlier McLaren had debuted the colours with which it would become synonymous. It was during the course of 1967 that the idea of going to papaya – and eventually creating what we’d now call a “corporate identity” – first emerged.

Bruce’s business partner Teddy Mayer had seen a sportscar in a similar hue at a British race meeting, and thought that it would show up well on the black and white TV screens of the time, and also loom large in the mirrors of rivals. 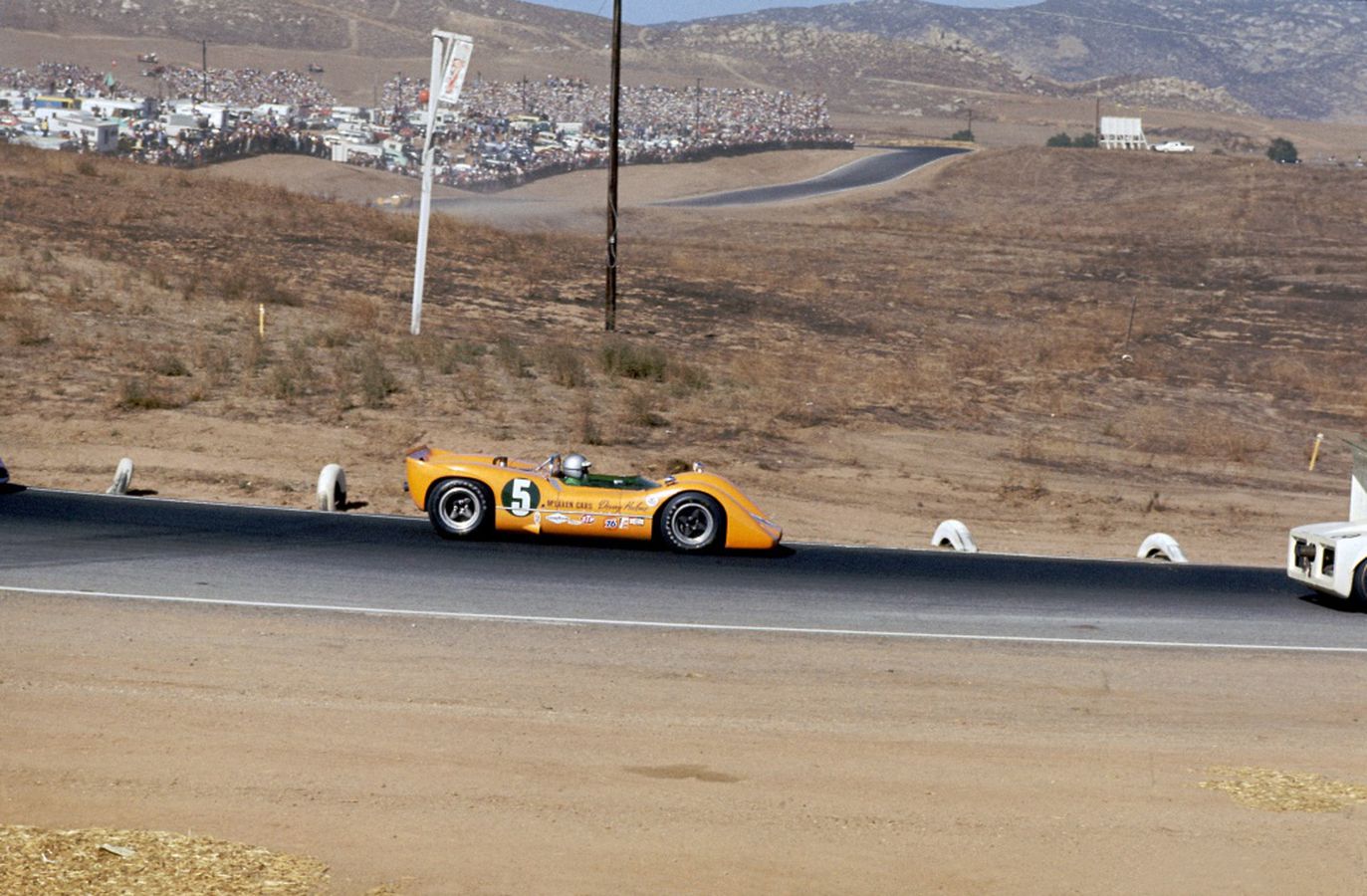 The livery made its debut on the M6A at the first round of the 1967 Can-Am season at Elkhart Lake on September 3, a week before the Italian GP. Hulme won the race, while Bruce himself would go on to win the title. It was the start of a glorious era, and the team would dominate the prestigious series for the next four seasons.

The new papaya look made its F1 debut at the Race of Champions on March 17th 1968, also the first appearance for the DFV-powered M7A. Incredibly Bruce won first time out, and then his new team-mate Denny Hulme triumphed at the International Trophy five weeks later. The first World Championship appearance came on May 12th at the Spanish GP, and a month after that Bruce scored the first GP win at Spa. Hulme would later add successes in Italy and Canada, and was even a title contender until the final race. Quite a debut year for the new look. 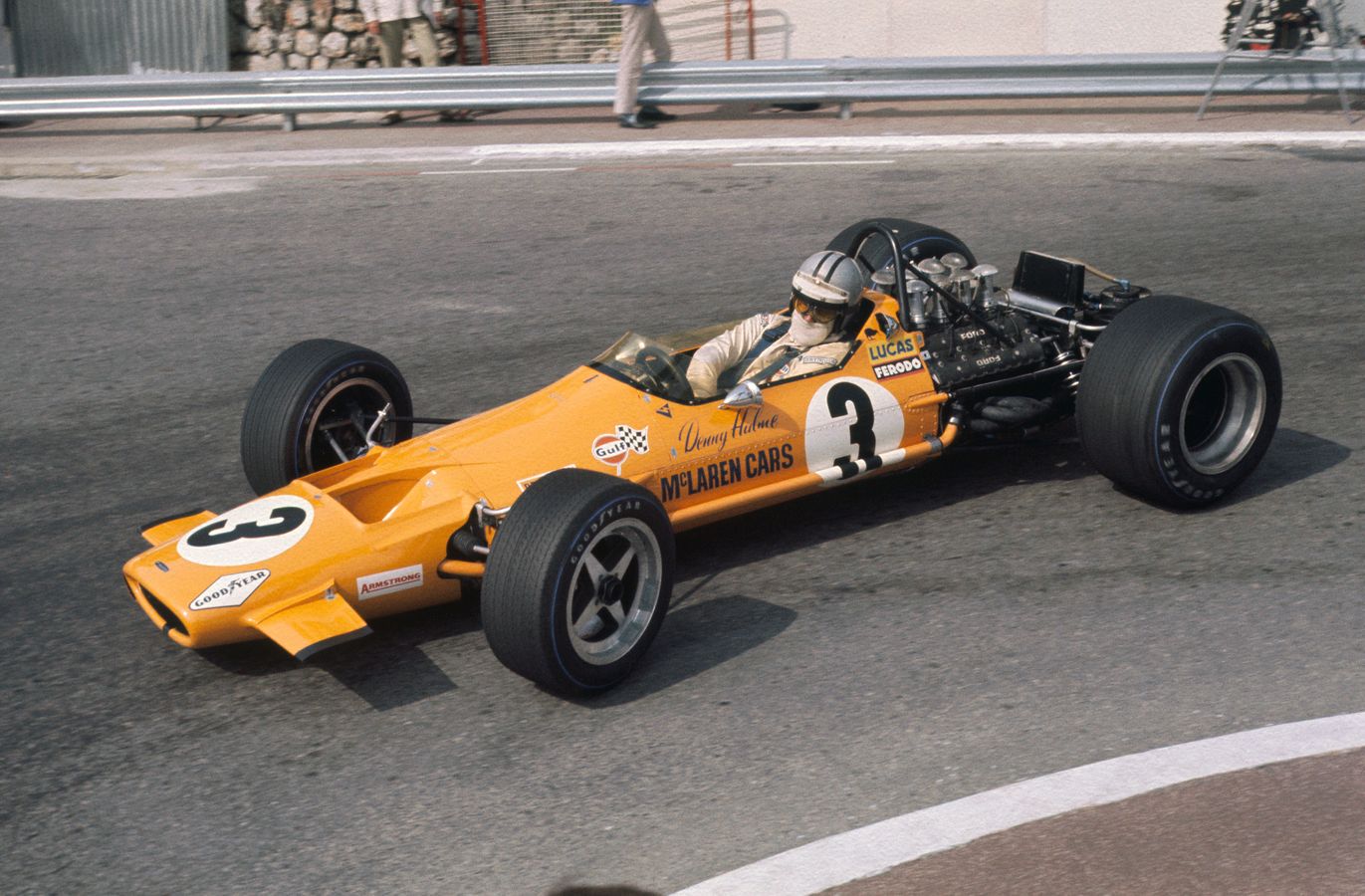 In 1968 McLaren had been partnered by Shell in F1, while Gulf came on board in Can-Am. The 1969 season saw the latter relationship extend across both categories. The oil company’s logo used a darker orange, but it gelled perfectly with the car livery. Over the years Gulf would get a big bang for its buck by becoming closely associated with the team’s successes.

The Gulf involvement extended into a third arena at the 1970 Indy 500. Hulme and Amon were entered, although neither would actually race, as the former was injured in a nasty fire and the latter withdrew. It was left to replacement Peter Revson to showcase the team’s papaya livery in front of the huge Brickyard crowd, running well until retiring. The following year he would go on to take pole and finish second – McLaren had well and truly arrived at Indy.

Meanwhile McLaren F1 cars would remain papaya through the 1969, 1970 and 1971 seasons, albeit latterly with darker-hued rear wings and airboxes as F1 cars developed from the traditional cigar tube shape. Papaya was also used for works entries in F5000, where Peter Gethin was the star driver.

After four years of running papaya in F1 the team took a different direction in 1972. As costs rose no top team could survive without major commercial sponsorship, and McLaren landed the Yardley deal that had previously been with BRM.

McLaren retained the essence of the livery that BRM had run for the previous two years – white with a multicolour “Y” on the nose – but maintained a connection to the past by keeping the belly of the M19 papaya, below the Yardley stripe. The inevitable Gulf logos were located in that area.

This new livery logged its first win in only its second race, when Hulme triumphed in South Africa. Meanwhile in 1972 McLaren also ran a works F2 car for Jody Scheckter in the traditional team colour, the youngster winning at Crystal Palace.

The touch of papaya on the side of the tub survived in F1 on the Yardley cars into the M23 era in 1973, when Hulme won in Sweden and Peter Revson triumphed in Britain and Canada. Despite the departure of Gulf it was retained for Mike Hailwood’s third McLaren entry in 1974, after the other two cars of Hulme and Emerson Fittipaldi went to the red and white of Marlboro and Texaco. 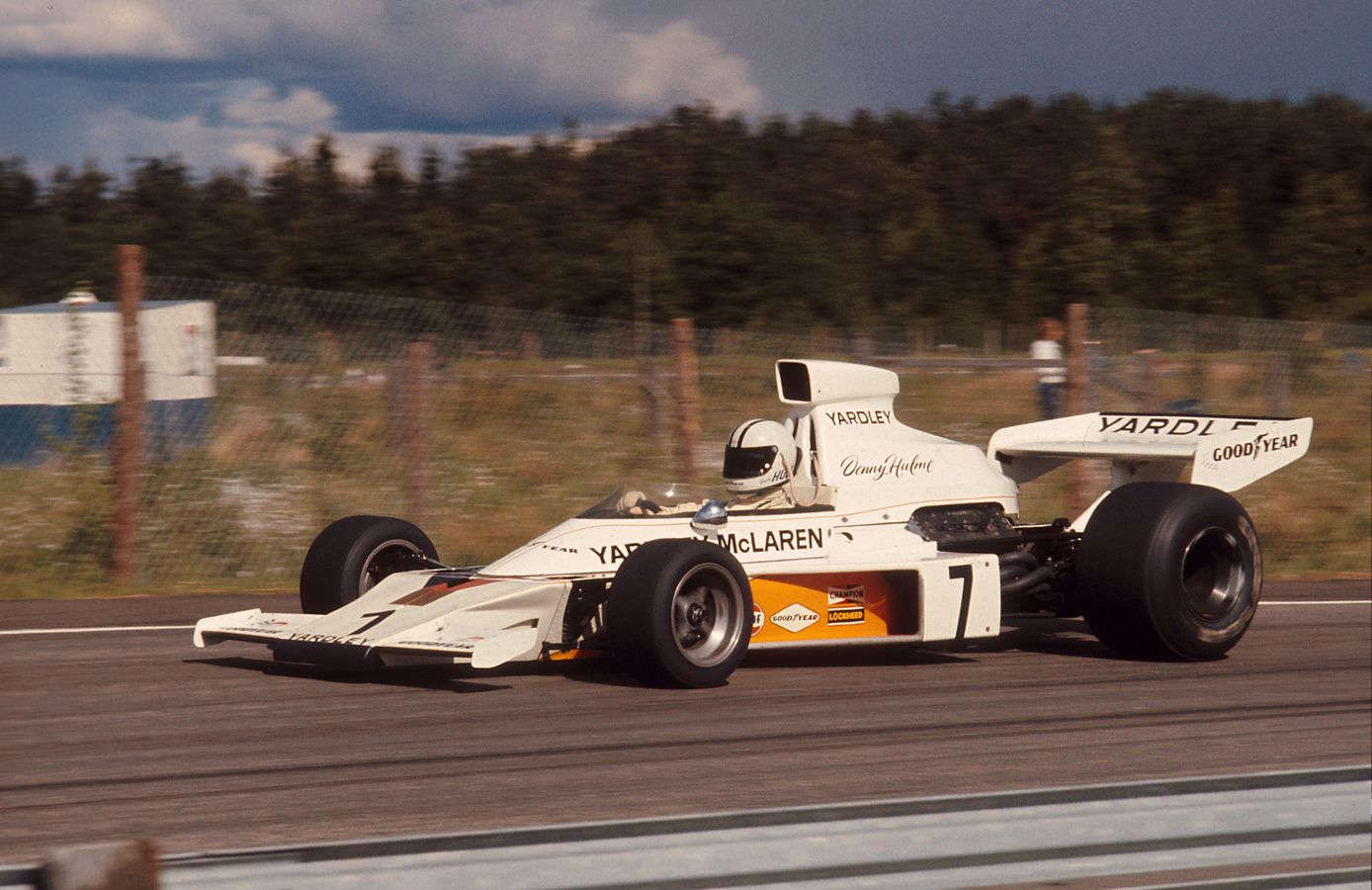 The last flash of papaya on a McLaren in an F1 race was seen on the third car at the 1974 US GP, by which time Jochen Mass had replaced the injured Hailwood. From 1975, McLaren ran in red and white.

However, papaya survived for a while in the USA. McLaren withdrew from Can-Am at the end of 1973, and thereafter the US operation focused on the Indycar scene.

It would be Johnny Rutherford who would really make the colours famous in oval racing. After winning a couple of events in 1973 – a qualifying race at Ontario and a heat at Milwaukee – he scored a famous triumph in the 1974 Indy 500. With four wins that year, he finished second in the championship. 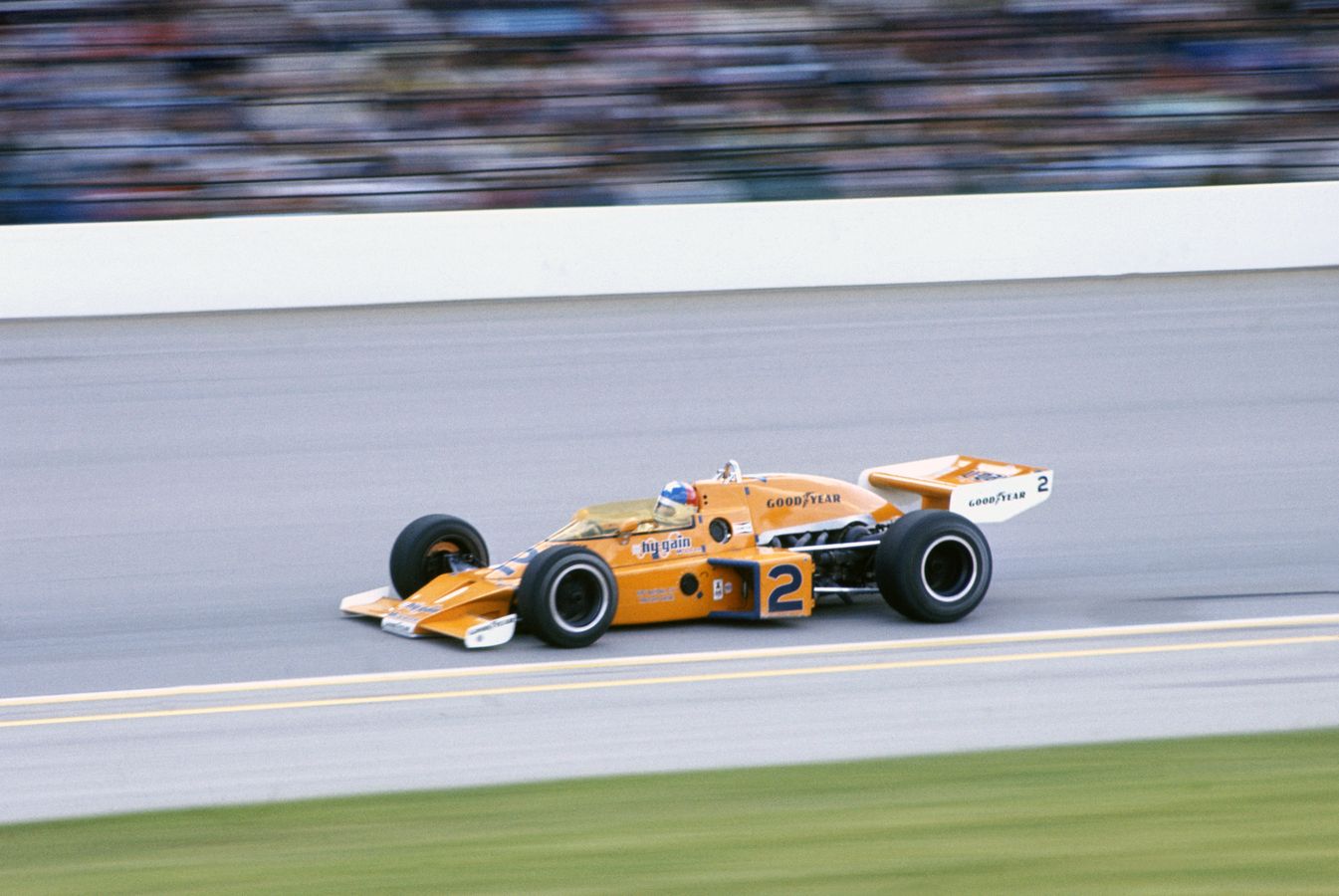 The Texan repeated that position in 1975 and again in ‘76, when he scored his second 500 win in papaya, this time from pole. However, it was all change for 1977 as the team landed sponsorship from First National City.

The last appearance of a works McLaren in the famous colours was on Rutherford’s car at Phoenix in November ‘76. At least for the time being…

Meanwhile F1 McLaren remained associated with the red and white of the Marlboro brand, and when that deal finally came to an end in 1996 there was much speculation about how the cars would look the following year, when new backer West came on board.

Finalising the livery was not the work of the moment – and nor was physically painting the cars. In order to get Adrian Newey’s new MP4-12 out testing and prepare for a big London launch of the new colours the team opted to have an interim testing livery, and that’s when there was a return to papaya for Mika Hakkinen and David Coulthard. 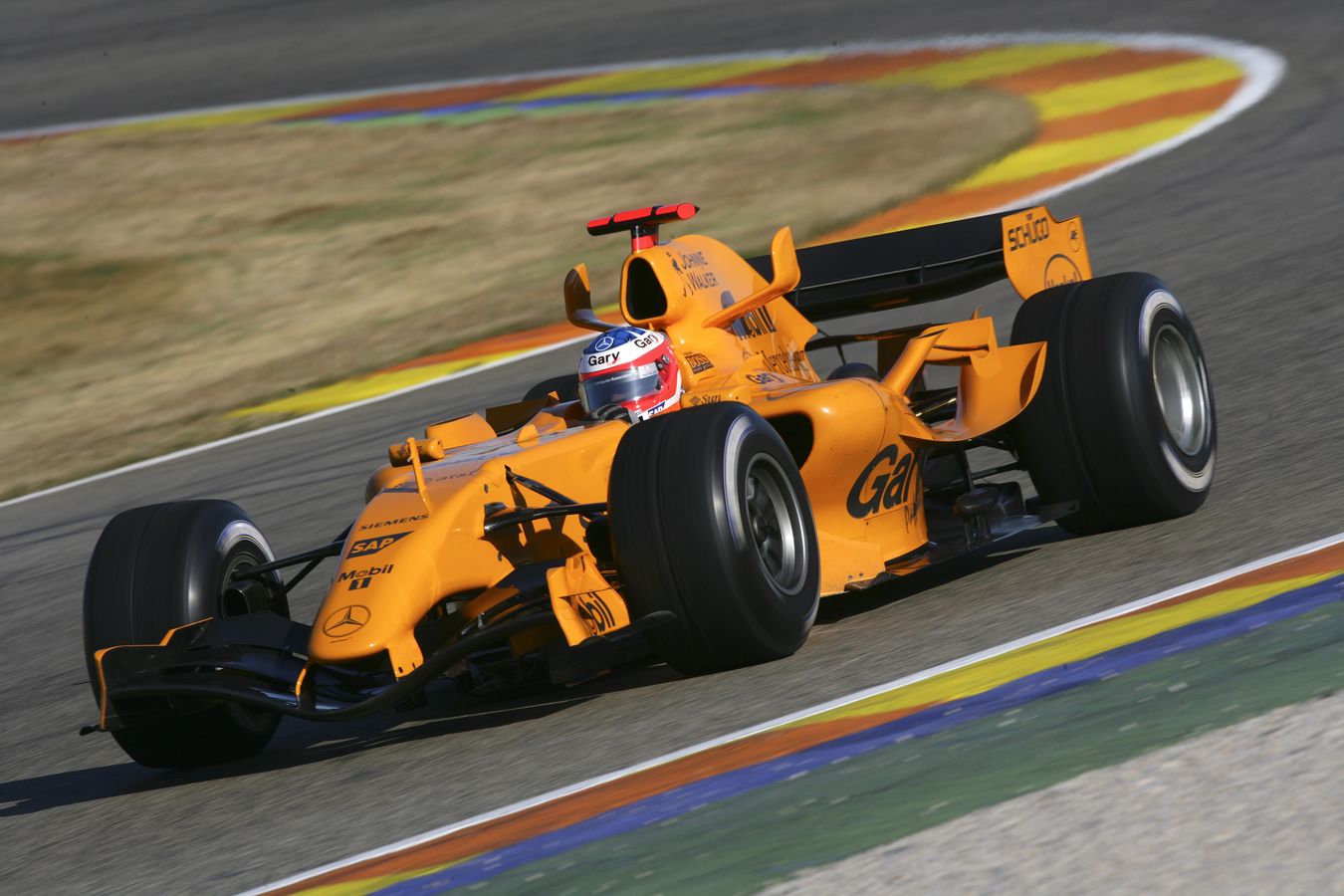 It was a strategy that worked well, and it would be repeated in 1998 with the MP4-13, and again in 2006 with the MP4-21 that would be raced by Kimi Raikkonen and Juan Pablo Montoya.

It wasn’t until 2017 that McLaren returned to its roots. For its third season with Honda hybrid power the team adopted a part orange livery that paid tribute to the company’s heritage, although with a darker shade.

However, the decision got everyone thinking, and when Fernando Alonso’s Indy 500 deal with Andretti was put together it was almost a no-brainer to feature the exact shade that Rutherford had twice won the race with.

The next step had to be a return to papaya in F1...

10 of our bravest stories

Get the inside information on our 2018 challenger