If at first you don't succeed, try, try again

One of McLaren's most extraordinary Formula 1 testing tales

If at first you don't succeed, try, try again

One of McLaren's most extraordinary Formula 1 testing tales

“Steve… Steve! The floor is on fire!

It’s the summer of 2010 and, in the high-octane hustle and bustle of the Goodwood Festival of Speed, Principal Composites Engineer Steve Foster has just received a phone call from colleagues carrying out straight-line aero testing with the MP4-25 in Spain – a call that would mark the beginning of one of McLaren’s most extraordinary Formula 1 testing tales.

“I just remember being in utter disbelief when I got that call,” reveals Steve.

“We had done so much CFD analysis and wind tunnel testing. None of it had suggested that this was going to happen.”

At this point, Principal Aerodynamicist James Ingles jumps in to elaborate on the science behind exhaust-blown diffusers and what led to this moment of sheer panic: “We were trying to feed more energy into the diffuser.

“The edge of the floor – next to the rear tyre – is very important aerodynamically, and if you can direct the high-energy flow from the exhaust into that area, there is a lot of downforce to be gained.

“But when we first tried it on track, the exhaust flow didn’t go anywhere near the tyre. Instead, it went inboard, over an area of the floor that we hadn’t protected – it was just bare carbon – and it got scorched.

“It turns out, this was due to a phenomenon known as the Coandă effect, which our CFD analysis and wind tunnel testing wasn’t picking up.

“When you’ve got an exhaust flow, it pulses because of the cylinders in the engine and this pulsing sets up a vortex structure at the end of the tailpipe. When this vortex came into contact with nearby bodywork, it was pulling the whole exhaust plume inboard across the floor."

“From that moment onwards, we were on the ragged edge for the rest of the 2010 season – trying to keep floors in one piece and stop them from burning,” admits Steve. 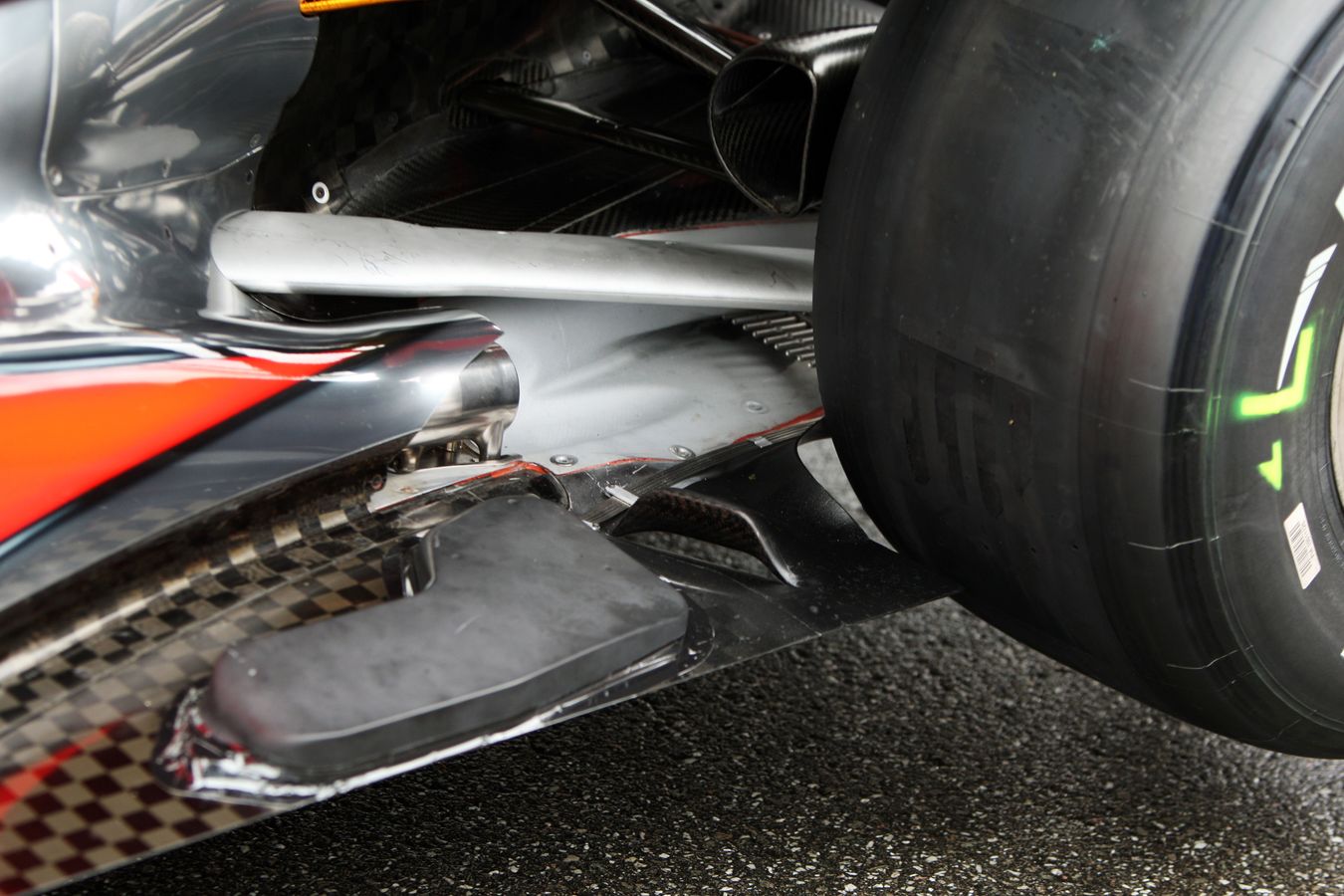 A packet of crisps

Despite having our fingers – and floors – burnt, we persevered with a new exhaust-blowing concept in 2011 for the MP4-26, as we looked to push the boundaries and turn the tables on our rivals.

“We missed our opportunity in 2010 and felt we needed to get radical,” says Steve. “So, we developed the fantail exhaust which was designed to deliver an even bigger aerodynamic benefit by blowing the edge of the floor ahead of the rear wheel, through a flat nozzle at the end of the tailpipe.

“Once again, in CFD and wind tunnel testing it looked to be really powerful and a big step forward.

And at this point, Steve goes all Marks and Spencer: “…these are not just any exhaust pipes. These are F1 exhaust pipes, which must endure pulsing that is very different to any ordinary road-car exhaust. 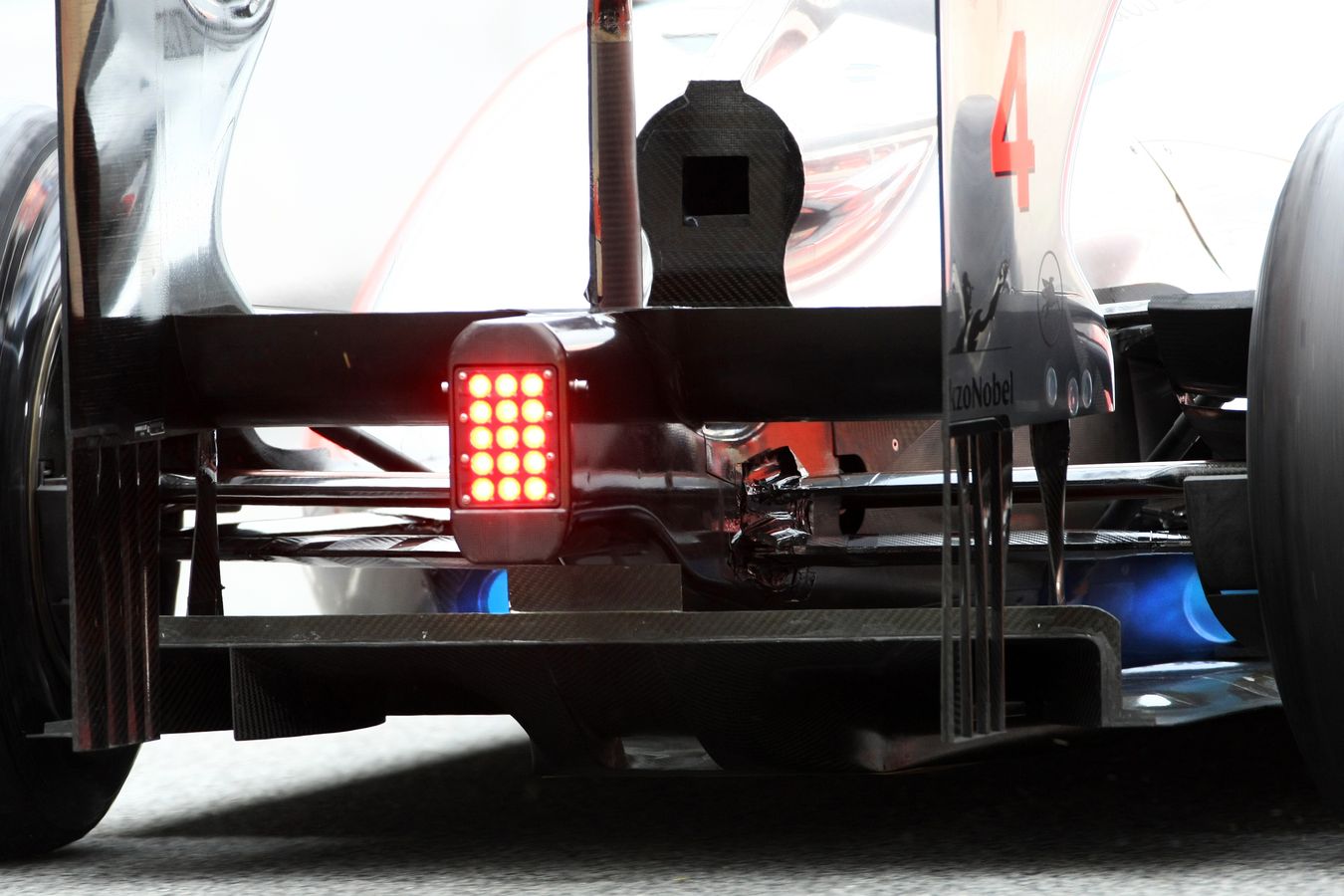 “When you look at an F1 exhaust pipe on the dyno with a high-speed camera, you can see that it vibrates and deforms like crazy.

“So when you’ve got a flat nozzle at the end of the tailpipe, unsurprisingly, it’s not the best structure to react to that kind of aggressive loading.

“I can remember seeing the high-speed footage of the fantail, it was like a foil crisp packet opening and closing.

“We made so many of them and thought it would hold together once on track, but it just kept on breaking during testing. It was a great idea, but it was too ambitious.

“So there we were: three weeks from the first race of the season, with an exhaust system that was completely unreliable. It was the stuff of nightmares.”

“It had taken so many months of hard work from everybody to develop it,” adds James. “We were all so invested in it and desperately wanted it to work, as it had the potential to be a game changer.

“Because you’re always pushing the boundaries in F1, you often find that things never quite work exactly as you want the first time. We were therefore convinced we just needed to iterate a little bit more and we would get there with the fantail. But, eventually, we realised that we were just not going to get it to work.”

“We had to rapidly develop another exhaust concept. This time with a flattened oval tailpipe, with an exit that was low down and immediately in front of the edge of the floor, ahead of the rear wheel,” says Steve.

“I can remember us hurriedly testing it on the dyno for durability and wondering if we would end up setting fire to everything because the exhaust gases were over 900°C. It was crazy, but we had to try it. 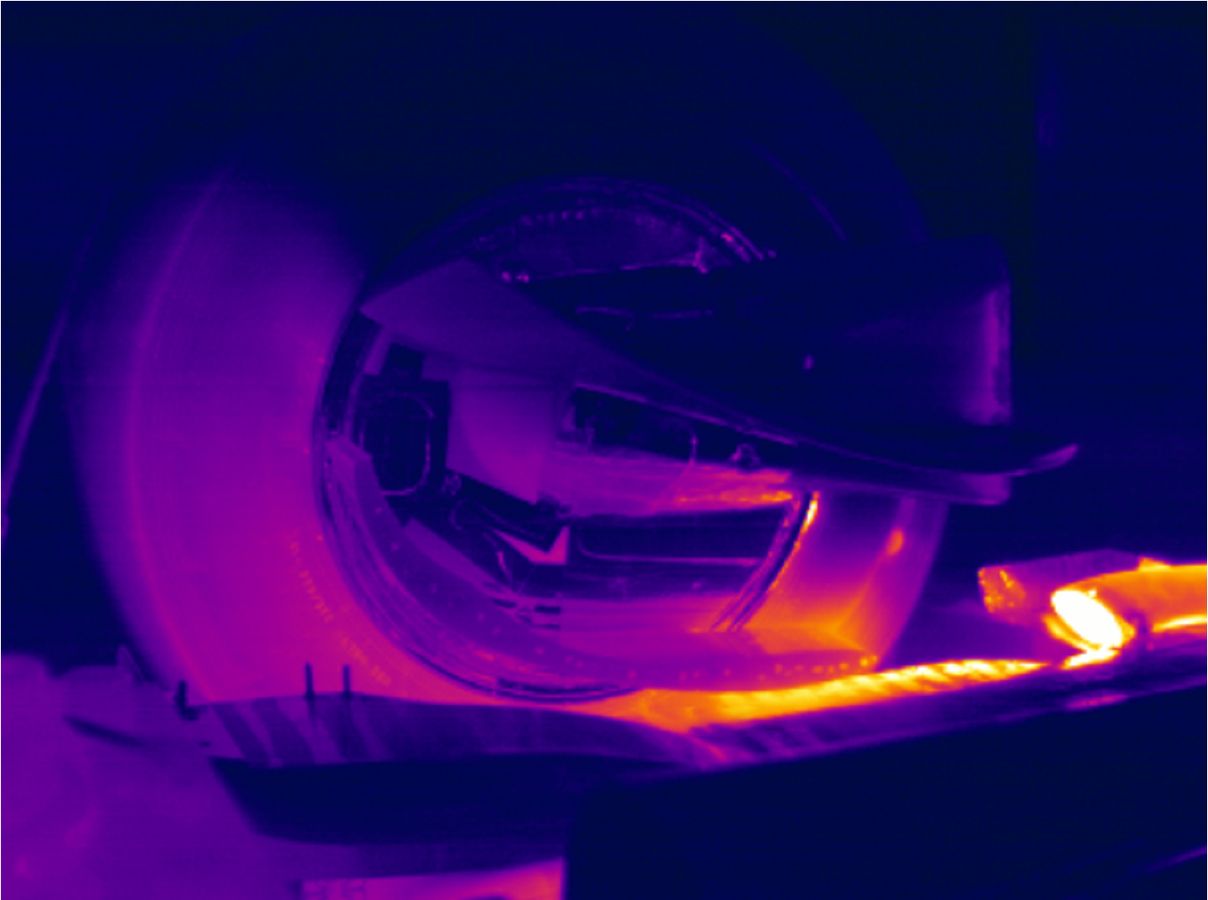 “We were so tight on time that we couldn’t make part of the rear floor from composite materials for Australia, so we had to 3D-machine it out of two huge billets of solid titanium.”

“This meant the floor was heavier than we would have liked,” admits James. “But even despite the extra weight, the performance it brought was massive. When it worked properly, it increased downforce by more than a third in some conditions – improving lap time by as much as several seconds.

“To go to Australia with the new system, completely untested on track and for it to work straight away, was unbelievable. We qualified on the front row of the grid and were overcome with relief.”

And then, 18 months after that fateful phone call to Steve, after everything the team had been through, we were finally able to use what we had learnt to put us ahead of the curve with the MP4-27.

“For 2012, to prevent teams from blowing the diffuser, the FIA banned low-exit exhausts and specified that the exhaust exits had to come out of the top body and point upwards – a far more traditional position,” explains Steve.

“But the FIA was unaware of what we had learnt through our travails with the MP4-25 in 2010.

“Having evolved our CFD and wind tunnel tools to properly replicate the Coandă effect, we knew we could use the phenomenon to our advantage. 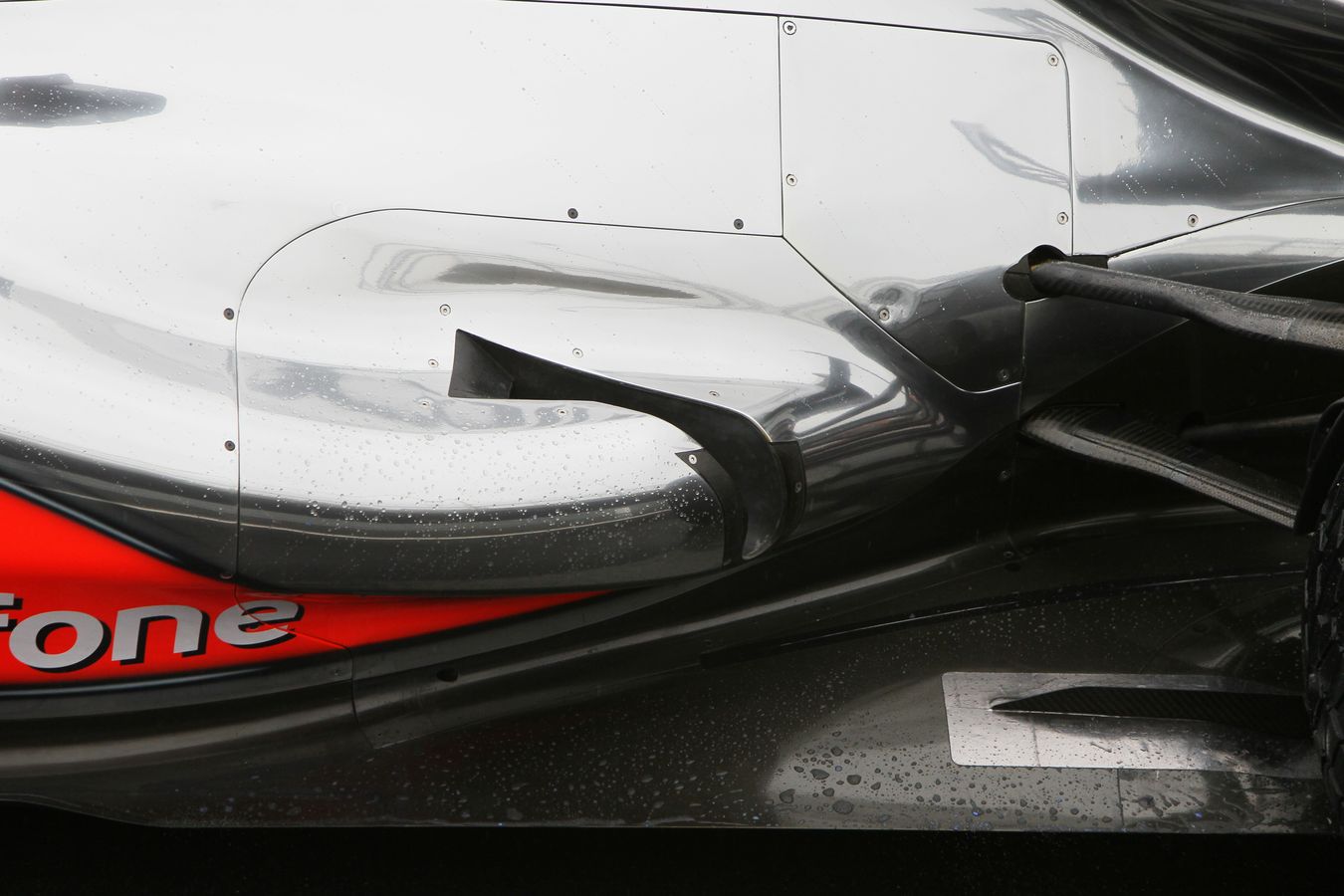 “We developed these slides – they looked like what you might find in a children’s playground – that sucked the exhaust gases fired out of the tailpipe down towards the floor, mimicking the effect of what we had been doing the year before with low-exit exhausts.

“We eagerly waited to see if any of our rivals unveiled a car with a similar concept. And, to our surprise, none of them did.

“We had stolen a march on the opposition and went on to lock out the front row and take victory at the season opener.