Daniel pops the lid on his favourite helmets from 2022

Daniel pops the lid on his favourite helmets from 2022

The term "one-hit wonder" is usually reserved for the music industry, but it could also be used to describe a limited-edition crash helmet: unique, full of personality and briefly catches the imagination of fans worldwide, before never being seen again.

The primary difference between the two is that's precisely the point of a one-off helmet. They're meant to be fun, but not long-lasting. The greatest limited-edition helmets wouldn't work if they were used every week. Daniel couldn't have carried an Ace Ventura-themed helmet his entire career, could he? But for a one-off grand prix in the city where the film was set, it couldn't have been any more perfect.

Ahead of the final race of the season, we asked Daniel to select his five favourite limited-edition helmets from 2022 and explain the story behind them. 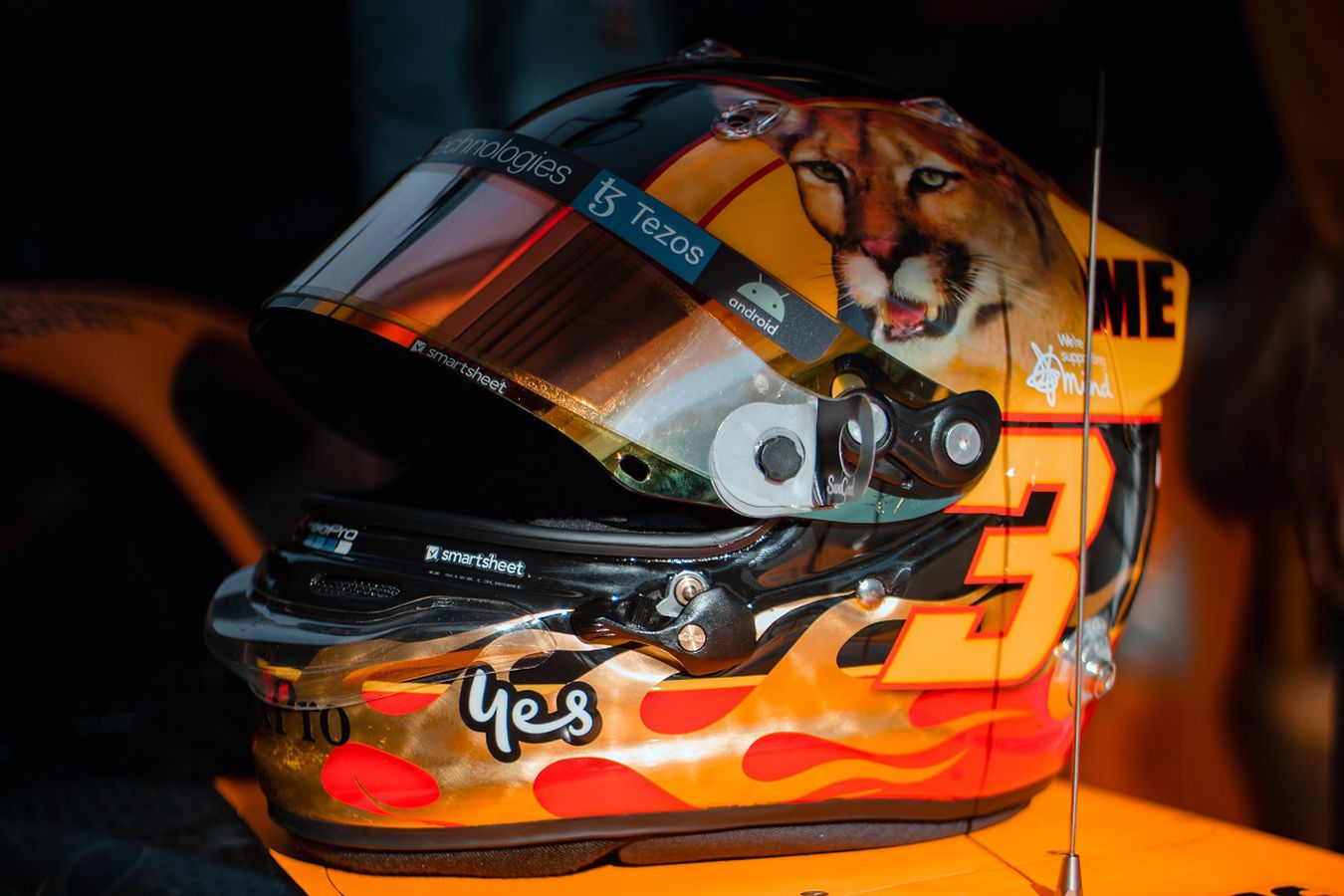 Once a year, every year, Daniel climbs off the aeroplane in Austin, takes in a big gulp of southern air and transforms into his now infamous alter-ego: Ricky Bobby. For this year's United States Grand Prix, Daniel brought along a limited-edition helmet to celebrate his adaptation of Will Ferrell's 'Talladega Nights' character.

"Anyone who hasn't seen the film Talladega Nights probably thought that this was the weirdest, ugliest helmet that they had ever seen," Daniel said. "But for those who have seen Talladega Nights, they'd have thought, 'this guy knows what he is doing!' It was an amazing tribute to Ricky Bobby and the most random helmet ever.

"To create it, we took the car's design and added the cougar and my name on there. We featured the quote "I wanna go fast," on the back, with flames and the python boots – I mean, come on? That is very funny. It was just very obnoxiously awesome." 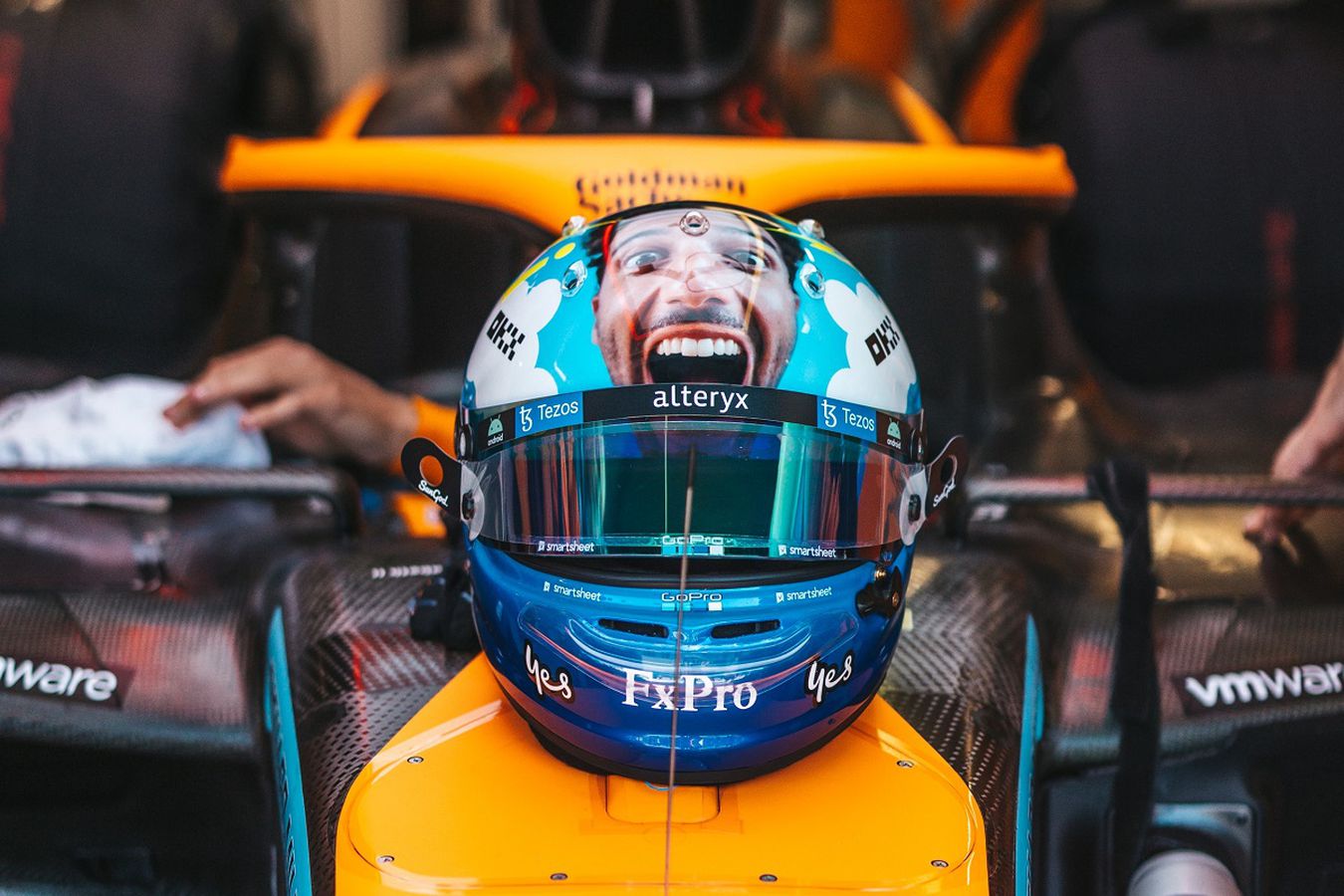 "Don't ask." When Daniel pulled our photographer into a side room at the Hungarian Grand Prix and asked him to subtly take pictures of his screaming face for an unspecified reason, we didn't quite know what to think.

We were in awe when his Valentino Rossi-inspired helmet was finally unveiled, but without context, it was certainly a bemusing scenario. Almost as odd as what might have been had Alex Albon not gotten appendicitis that weekend…

"This is a crazy story," Daniel said. "I don't know how much of this is public knowledge… As you will remember, Alex Albon had appendicitis that weekend. He messaged me from the hospital, saying: 'dude, I literally had the same helmet design for this weekend that I was going to race with.'

"That is a crazy coincidence. We both replicated a Valentino Rossi helmet he used at Mugello in 2008, each putting our face on the top of our helmet. I liked that, it was so much fun and so Valentino. It was reasons like that why Valentino was so adored during his career." 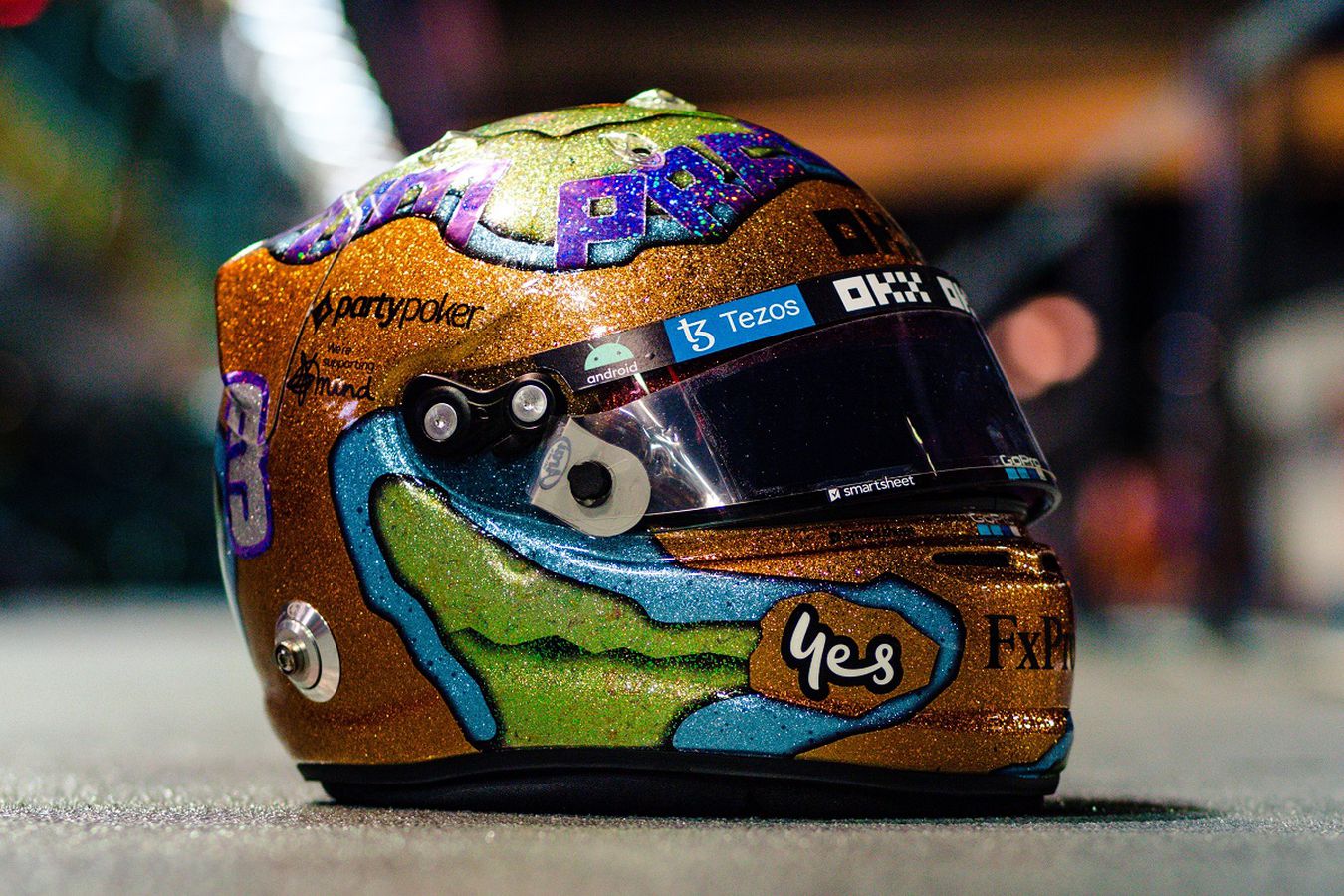 No, Benee's 2019 hit song 'Glitter' wasn't written about Daniel's Singapore lid, but you could have fooled us. We're not sure if the Aussie is a fan of the New Zealand artist, but there's every chance this song was playing in the background when he and his designer came up with this idea.

But then again, it seems like such an obvious concept, and sometimes, the greatest ideas are the simplest, and this helmet was an ode to that. The one-off design looked iridescent under the lights, sparkling as he wound his way around the Marina Bay Street Circuit at night.

He explained: "For Singapore, I took my standard design and glittered it up, basically creating a night version of my helmet. The helmets always look cool when they are glittered up. It creates a retro, 80s speedway-style helmet, which I really like. That was pretty sick." 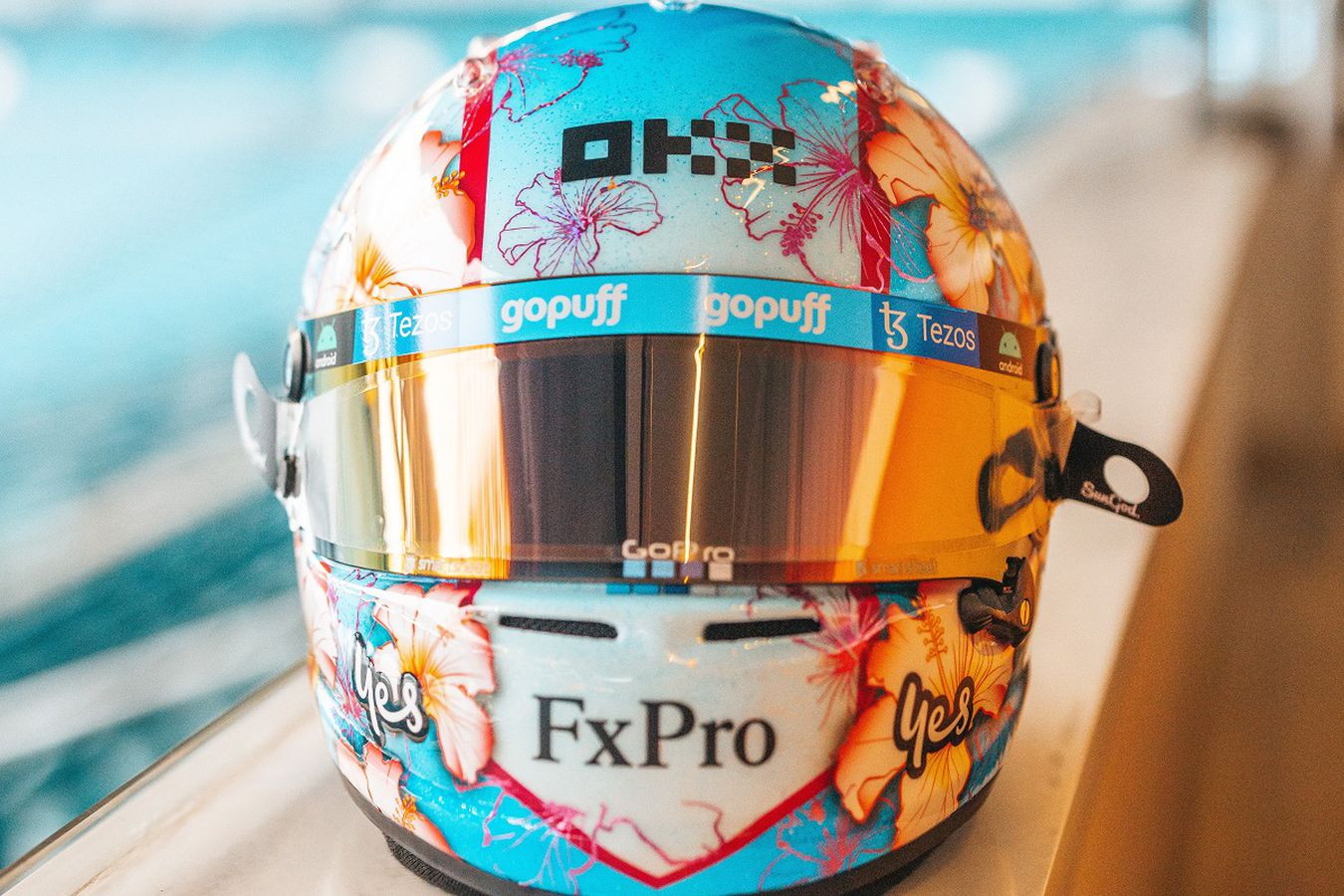 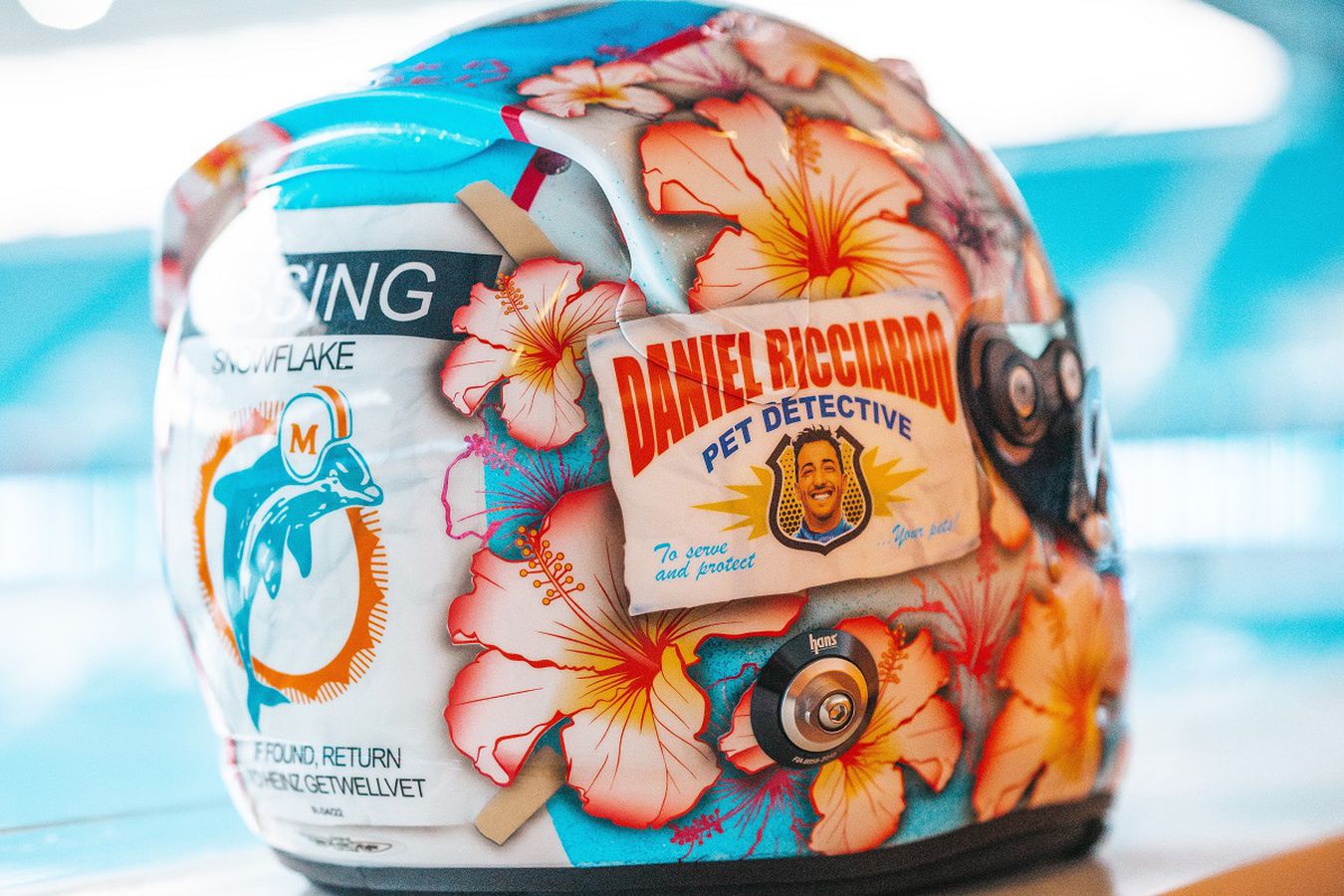 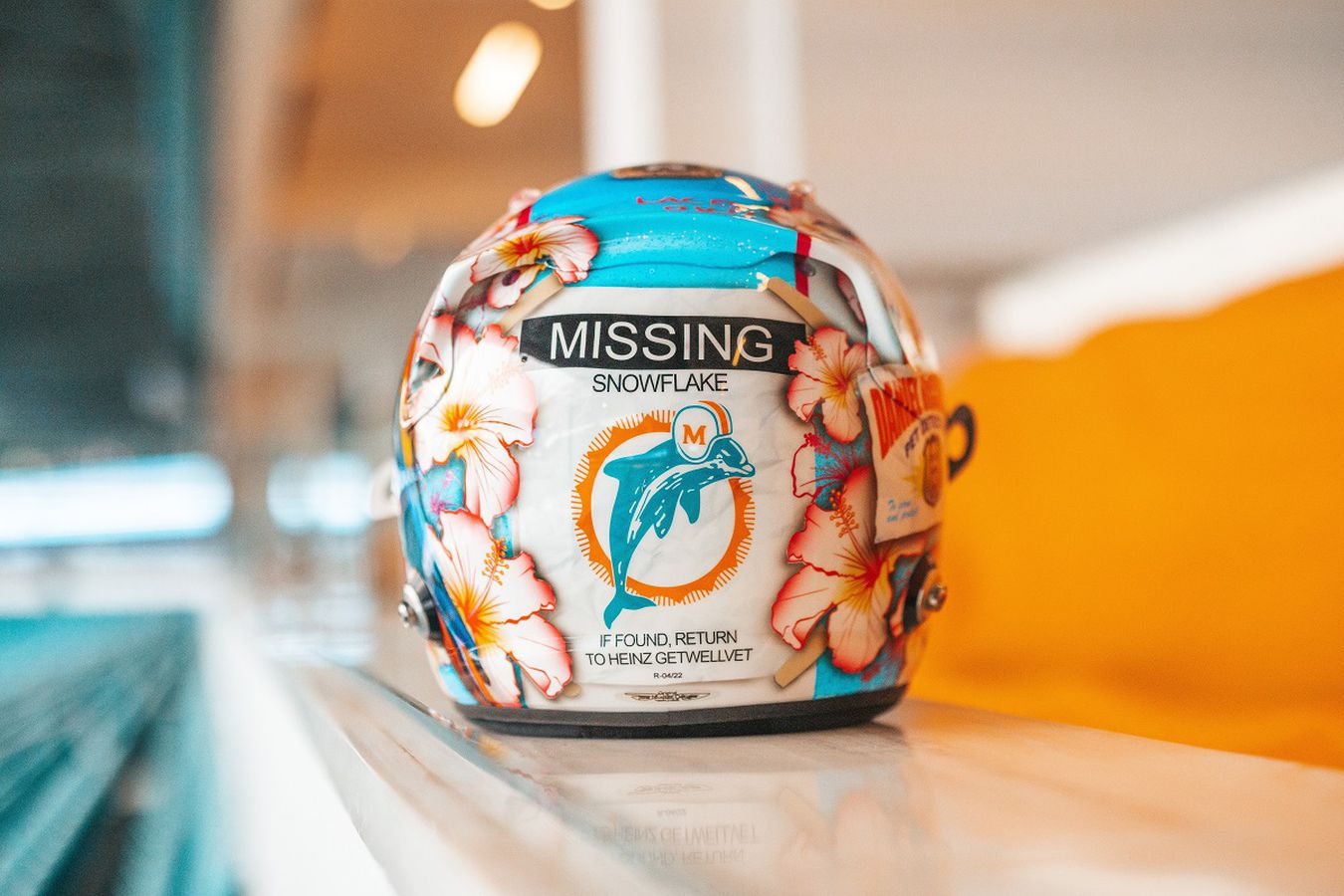 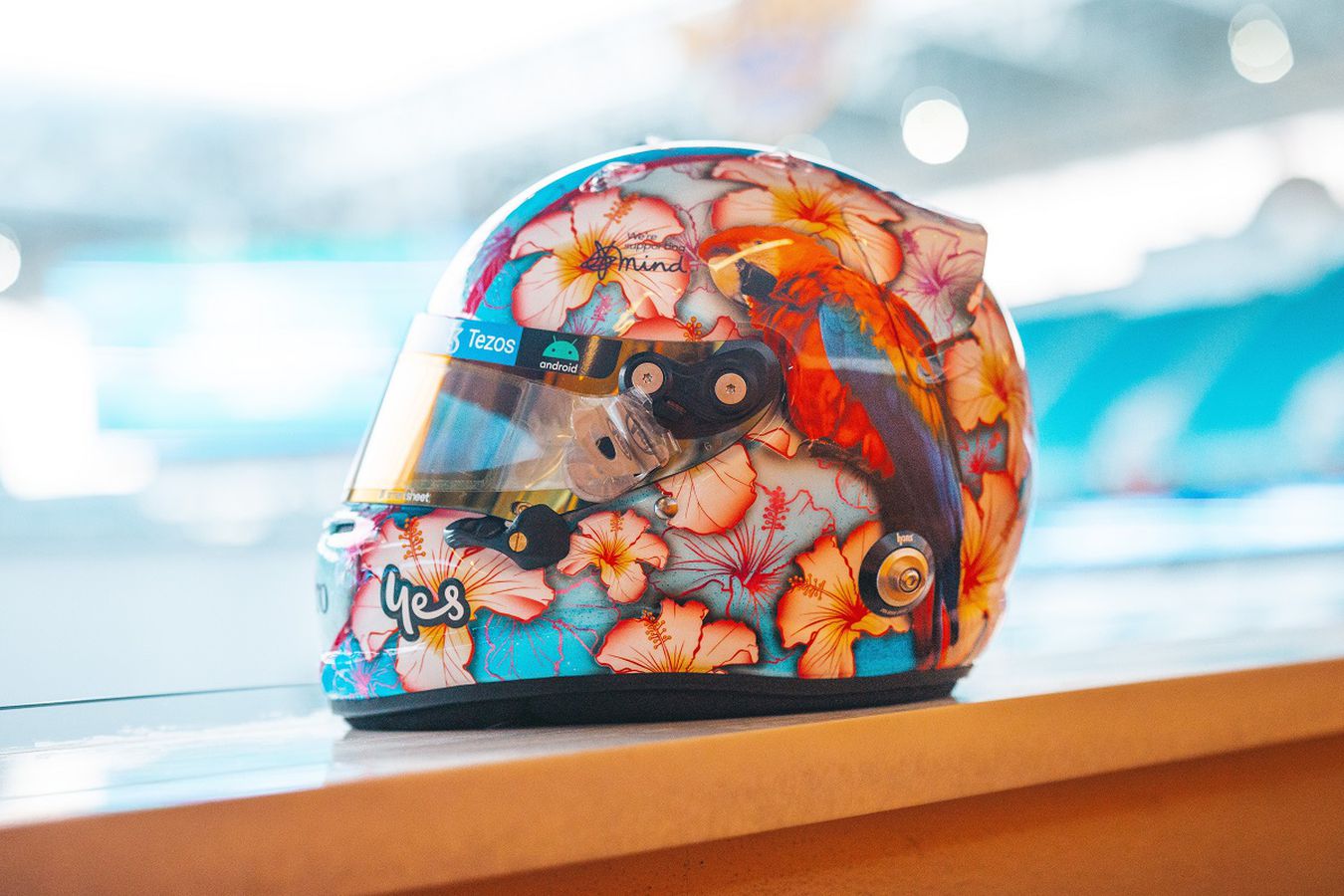 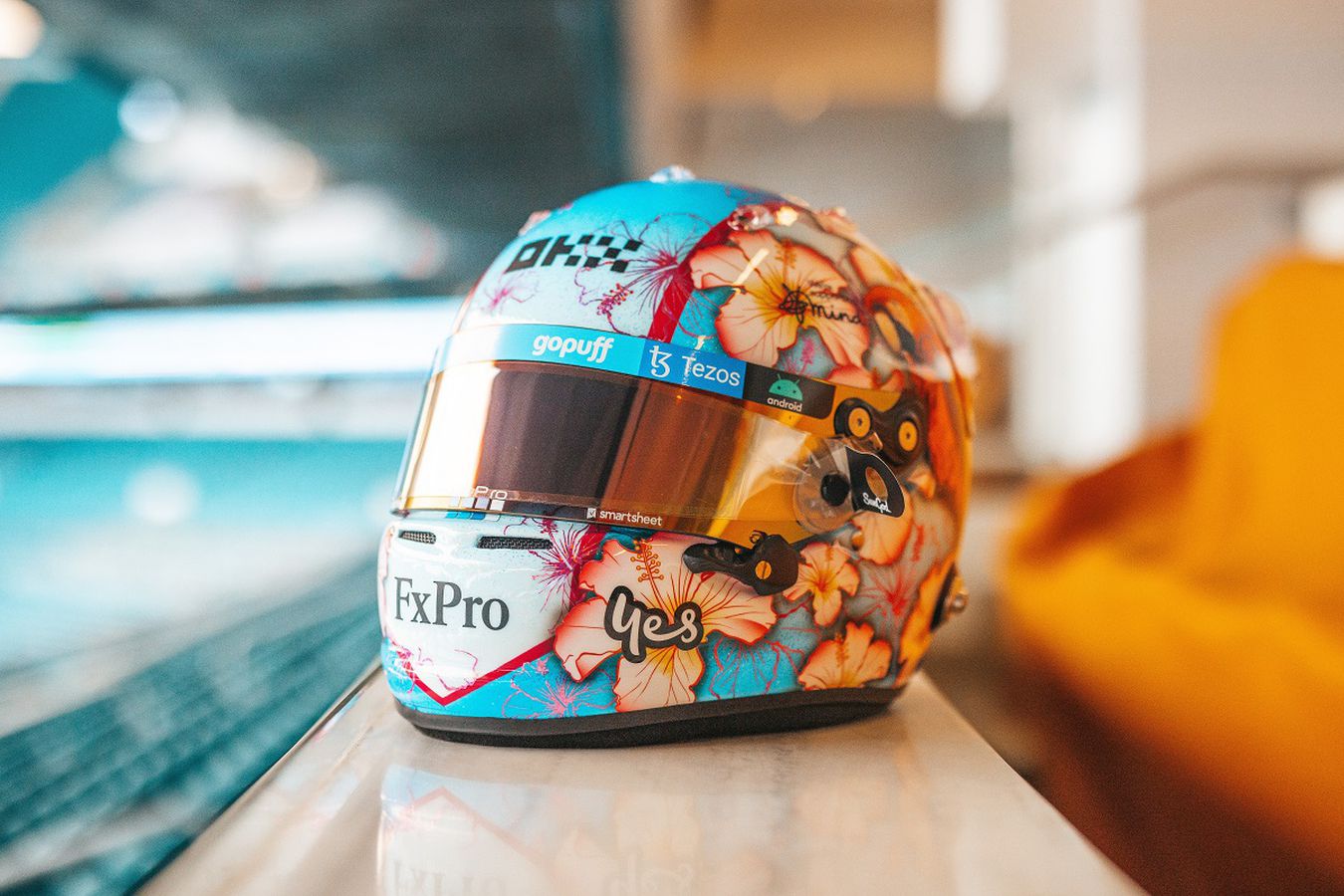 Another American race, another American film reference. Daniel's a big kid at heart, and like many of us, grew up watching Jim Carrey's hilarious and unique acting style.

So, when we debuted in the city where 'Ace Ventura: Pet Detective' was set, on a circuit that wraps around the home of the Miami Dolphins, we had a good idea of what Daniel might produce, and he didn't disappoint.

"I am a big Ace Ventura and Jim Carrey fan," Daniel said. "I spent pretty much my whole childhood watching these movies. Pet Detective, the very first Ace Ventura film, was my favourite. The film is set in Miami, with the Miami Dolphins and all of that. American football player Dan Marino stars in the movie. The helmet was very fitting for where we were: we were racing around the Dolphins' home ground, the Hard Rock Stadium.

"That was fun, but we struggled to find the execution. The race was probably 10 days away, and I was close to pulling the pin and forgetting the idea because it wasn't what I had pictured. Jens of JMD designed the helmet, and he put this one final design through for us to check out, and I was like: 'Alright, I think we've got it.' I am really glad that we did this one because, honestly, it was so close to not happening." 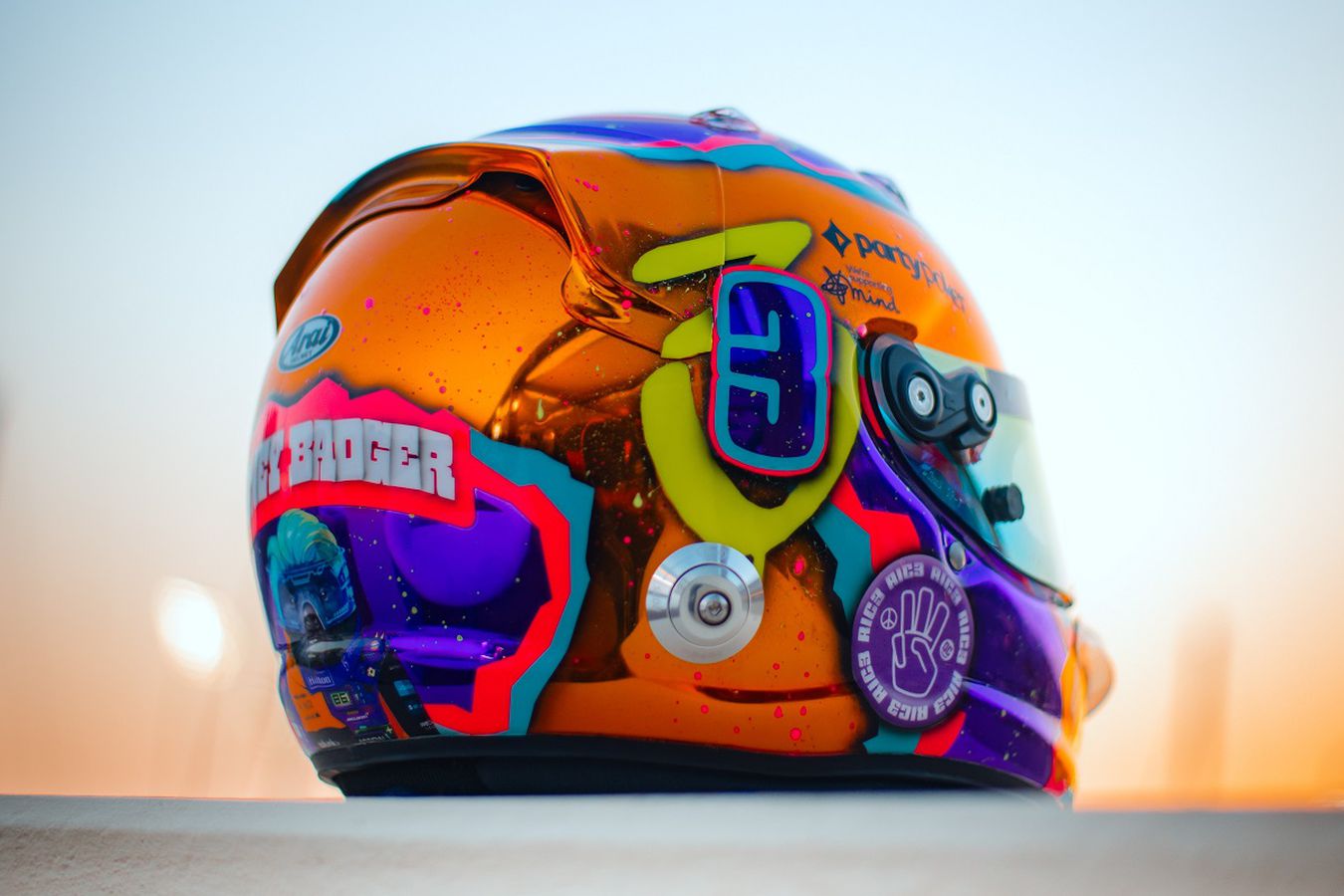 As Daniel prepares to close the chapter on his time with McLaren, his Abu Dhabi Grand Prix helmet is a nod towards the future. But just not just any future, a dystopian cyberpunk future. OKX have taken over the Australian's helmet for the weekend and given it a futuristic makeover.

Daniel said: "They have used some of my current helmet design as inspiration, but it has gone all futuristic, and it is chromed out for the night part of the race. It looks pretty cool. The helmet has got a bit of a street art vibe to it.

"The Honey Badger is also back on there! I haven't run the Honey Badger on the back of my helmet since my Red Bull days, but it is back, and it is pretty cool."

When asked which helmet design from 2022 was his favourite, Daniel struggled to decide: "It's hard to choose, but I like the helmets that have a story behind them."

Seeing as Daniel can't choose, we'll give you a chance. Keep an eye on the McLaren App for a poll this weekend, or send us your thoughts by replying to this article on Twitter or using the #FansLikeNoOther.