Now that's what I call strategy

Now that's what I call strategy

So, you’ve seen our 2021 Formula 1 car. You’ve even seen it on the track. And now you just want the talking to stop and the racing to start. We get it. Thankfully, the season-opening Bahrain Grand Prix is just around the corner. But what if you can’t wait that long? Well, we thought we’d remind you of what you’ve got to look forward to by reliving some of our finest calls from the pit wall in recent years, with the help of McLaren F1 Director of Strategy and Sporting Randy Singh.

While Lando Norris and Daniel Ricciardo were making beautiful music at British Grove Studios in Melody Makers, Randy was laying down some sick beats of his own in our recording studio at the McLaren Technology Centre. Granted, this recording studio might have only been a meeting room and a nine-year-old Dictaphone held together with duct tape and some cable ties found at the bottom of number one mechanic Marc Cox’s trusty toolbox, but the acoustics were out of this world and we can assure you that this compilation of strategy hits is all killer, no filler.

A memorable podium for McLaren and the highest points score of any team meant that, on the face of it, the 2020 Italian Grand Prix was a belter for us. However, it could have been even better: we could have won. It’s a classic case of what might have been, had we not pitted under the Safety Car and instead changed tyres when the race was brought to temporary halt by a red flag.

But hindsight is a wonderful thing. “Even though the team takes into account the chance of a red flag, it’s impossible to predict when it will happen and, with the information we had at the time, choosing to pit both cars when we did was the right decision,” explains Randy. “The fact we missed out on victory – by a mere 0.415s – does not detract from the fact that we made the right call at the right time.

“This race is a perfect example of separating the outcome from the decision making. Yes, we could have achieved a better result, but it would have come from poorer decisions and relied more heavily on fortune – an approach which can often cost you dearly. It’s why we focus on making good decisions and incrementally improving them, rather than changing our approach based on the final classification of a race.” 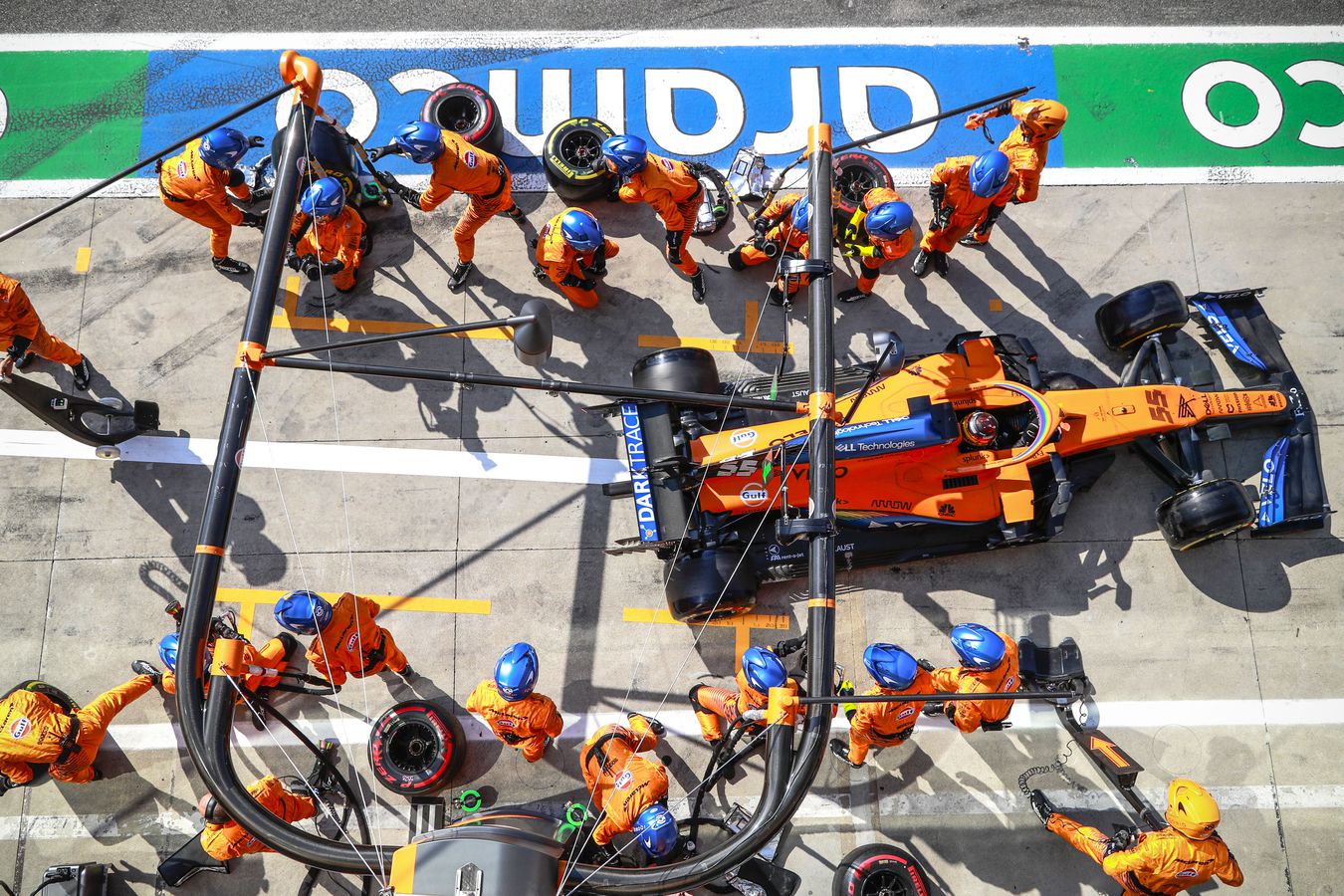 After a strong opening stint from both our drivers in the 2019 Brazilian Grand Prix, we split tyre strategies: putting Lando on the Hard and Carlos Sainz on the Medium to maximise our chances later in the race. We wanted to minimise risk in much the same way a forex trader might hedge their position via FxPro to neutralise the negative impact of unfavourable movements in the market.

“The Medium was the better tyre according to our analysis and we elected to keep Carlos out on those tyres in fifth place, from where he would need to defend hard to keep cars behind,” says Randy. “Meanwhile, with Lando we took the opportunity to fit the Medium tyres and attack the cars ahead.

“We estimated that the outcome of each strategy was roughly similar, Carlos would struggle to defend towards the end but had the benefit of track position and Lando would be able to attack but had to make up positions. In either case, we would likely come away with a fifth place – a good outcome given that Lando started P10 and Carlos started from the back of the grid due to a power unit issue in qualifying.

“Although an unexpected Safety Car scuppered Lando’s chances of fighting through the pack, it meant Carlos had an easier time defending; the hedge worked well, ensuring that even in strange – and unexpected circumstances – we got our cars home in good positions. Carlos finished fourth and was later promoted to a podium position – the team’s first in five years – while Lando brought home further points in eighth.”

The 2019 German Grand Prix is unquestionably one of the most eventful races we’ve seen of late. Peppered with incidents, errors and Safety Car deployments, not to mention constantly evolving track conditions caused by wet weather, it provided the ultimate strategic challenge.

“Based on our weather forecasts, the probability of a Safety Car, and driver feedback on tyre and track conditions, we avoided making a second pit-stop too soon – unlike many other teams,” explains Randy. “And when a Safety Car was deployed, as the rain intensified, we were able to make a single stop for Intermediates compared to many other drivers’ two stops in this phase of the race. This vaulted us up the field to sixth place, which would later become fifth place after a final stop for dry tyres.

“It’s important to put this result in the context of the 2018 German Grand Prix – a wet race where we felt we had not maximised the result. Rather than overreact to the outcome and make significant changes to our strategic approach in wet races, we made small adjustments to enhance our performance in future rain-affected events – seeing them pay off a year later was incredibly rewarding.”

A typically eventful season-opener and one that saw us get our campaign off to a flyer with Lando scoring his first F1 podium; the 2020 Austrian Grand Prix features in this list of strategy hits not because of an inspired call or split-second decision, but because it’s a textbook example of detailed preparation and practice leading to a good outcome.

“Having built a gap to those behind, we seized the opportunity to pit both cars when a brake failure for Kevin Magnussen saw the Safety Car deployed,” says Randy. “But, with both cars boxing on the same lap, the team had to pull off a ‘double-shuffle’ stop – something that’s far from easy to execute nor done very often in a race. The execution was flawless though because it was a scenario we had meticulously researched, prepared, planned and practiced for.

“The seamless double-shuffle meant we could take full advantage of the Safety Car to minimise time lost in the pits. It opened the door for us to attack the cars ahead of us when we fitted Mediums during a later Safety Car period and chase an extra point for fastest lap. And, crucially, it put us in the pound seats to capitalise on Lewis Hamilton being handed a five-second time penalty. Lando bagged fastest lap on his final tour of the Red Bull Ring and finished 4.8 seconds behind Hamilton to earn a coveted place on the podium.”

5. With A Little Help From My Friends

Qualifying ninth and 12th for the Monaco Grand Prix, as we did in 2019, wouldn’t ordinarily provide much optimism for a good points haul – it is, after all, notoriously difficult to overtake around the Principality. “But we weren’t going to let that stop us and devised a strategy that enabled us to take advantage of the difficulty to pass at Monaco,” says Randy.

“Expecting a one-stop race, our hands were tied somewhat when it came to Carlos who had to start on a set of used Softs as a result of making it into Q3. But with Lando qualifying outside the top 10, he had a free tyre choice and we chose to put him on a deviating strategy by running the Medium tyre first and then the Soft. 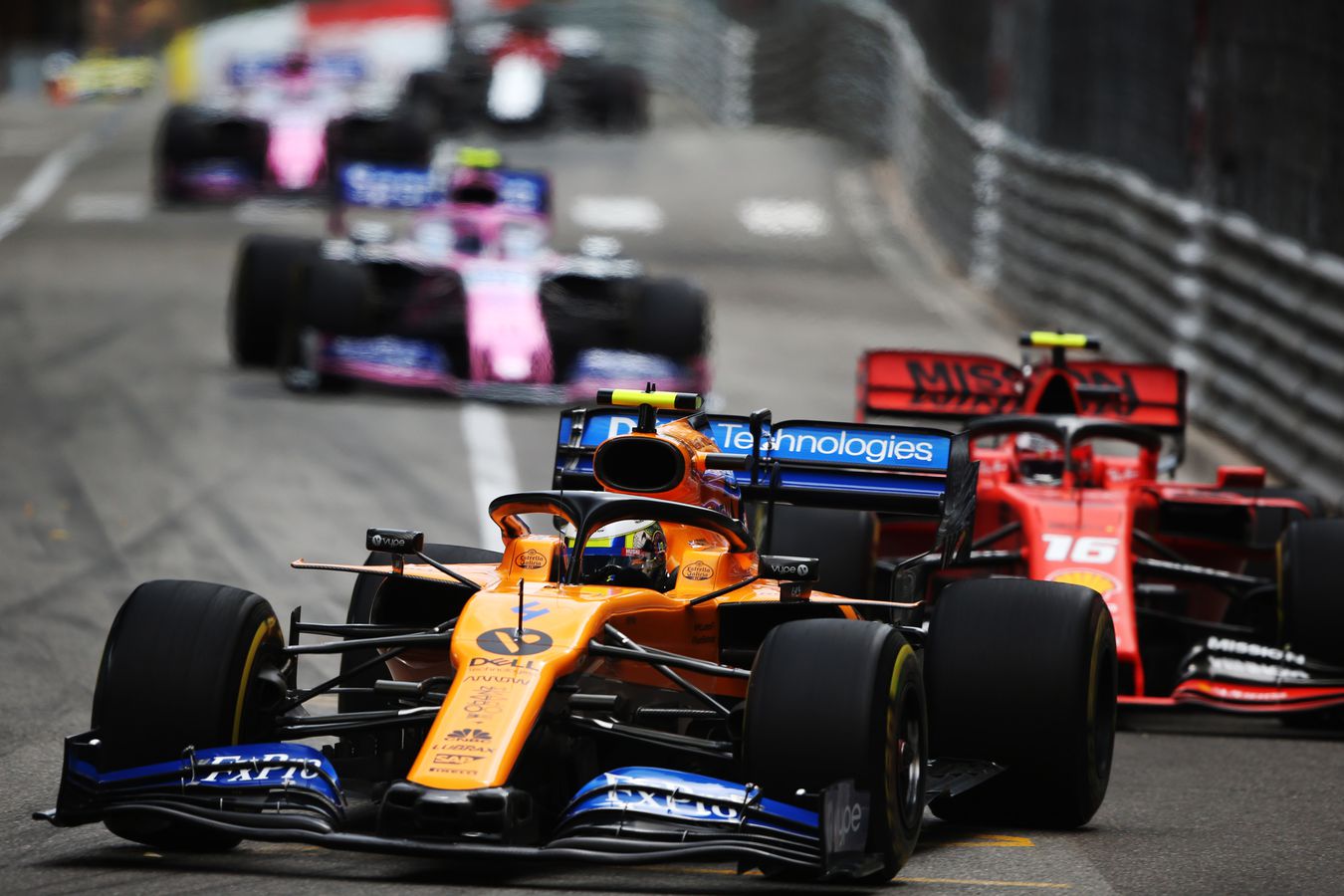 “After an early Safety Car, Lando carefully managed his tyres so that he could complete a longer stint. It was at odds with many of the drivers that found themselves behind him on track. Even though they may have been faster at that point in the race, they were unable to pass him and because of this they were effectively taken out of Carlos’ race. Carlos was able to pit with his position protected and by the chequered flag had worked his way up to sixth – no mean feat at Monaco – thanks to great teamwork and strategy.

“What makes this strategy stand out is that it’s a perfect example of how teamwork has a significant impact on our performance. There are many other examples throughout a race weekend, some of which are incredibly subtle, but this one really highlights the spirit of collaboration at McLaren, and everyone’s desire to put the team first and work together to try to maximise the overall result.”

An alternative look at the team's start to the year

You only get one chance to make a first impression