The greatest McLaren driver line-up of all time (statistically)

The greatest McLaren driver line-up of all time (statistically)

For the past two weeks, we’ve asked you to help us in our search for the ultimate McLaren driver line-up and now the finish line is firmly in sight as we’re down to the final four contenders.

But you’re not the only ones we’ve asked to join the debate on which drivers figure where in the pantheon of McLaren greats. Our friends at Automation Anywhere, who are leaders in intelligent automation, have created a bot to crunch the numbers and they are now ready to wade in on the debate with some serious data-driven muscle.

We can now reveal to you the greatest McLaren driver line-up, statistically, of all time… 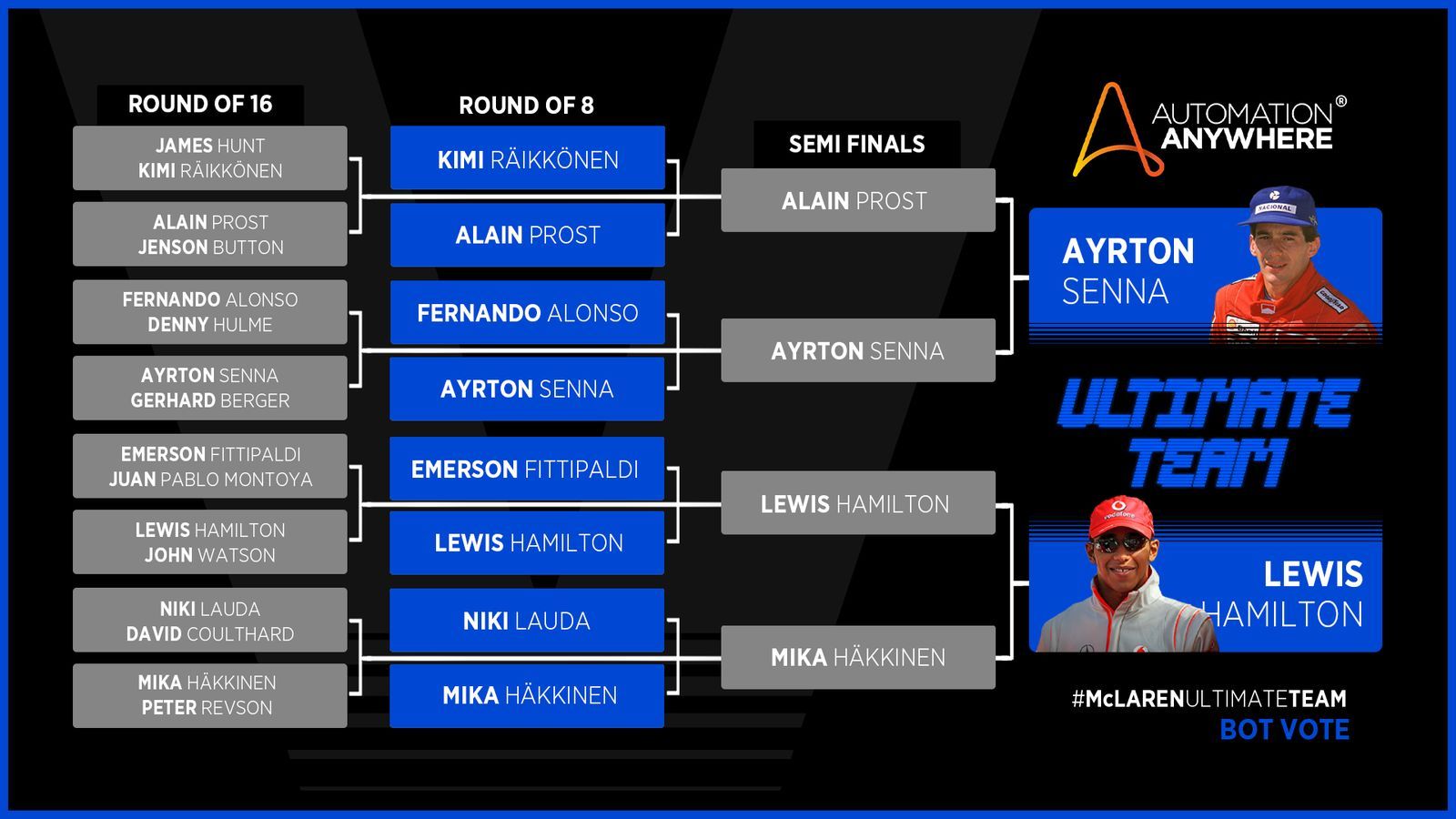 That’s right, after crunching 70 years of complex data across multiple sources, the numbers say that the ultimate McLaren driver line-up is Ayrton Senna and Lewis Hamilton. It’s undoubtedly a mouth-watering partnership, but should we be that surprised?

One is the driver that all drivers – even those who illuminated their respective era and are remembered for the imperishable moments they brought to the sport – are measured against and, in almost every instance, found wanting. While the other, is busy rewriting the record books and may well end his career as the most successful driver of all time.

However, the final two determined by the bot is only part of the story. Delve a little deeper and you’ll find that, although the Round of 16 produced identical results to the fan vote, the bot produced a final four with a rather different complexion to that decided by the fans.

The bot concluded that Alain Prost would get the better of Kimi Räikkönen and should progress, therefore reigniting the most iconic F1 rivalry of all time by once more pitting the Frenchman head-to-head with Ayrton Senna.

Not only that, but on the other side of the draw, the bot reckoned Mika Häkkinen should be the man to go up against Lewis Hamilton for a spot in the final two – completely at odds with the fans, who have sided with three-times world champion Niki Lauda.

But why the disparity? Who – or what – has got it right, man or machine?

While we’ve seen thousands and thousands of votes from fans over the past weeks and plenty of debate as to which drivers should progress in the competition, the Automation Anywhere bot has been quietly and relentlessly working away in the background. It’s focused purely on the cold, hard facts and provided a statistical analysis which has culminated in a set of FIFA Ultimate Team-style driver ratings from which to empirically determine the greatest McLaren drivers. And here are the numbers from the bot that back up its selections…

A normalising adjustment of 5% was made to drivers who had won a Formula 1 World Drivers’ Championship, to differentiate them from those that have not.

Across six attributes, drivers were scored out of 100 and the top two made it into the #McLarenUltimateTeam.

The six attributes are:

1. Pace (PAC) – The is all about the driver’s speed and ability to push the car to the limit.

2. Composure (COM) – Under pressure, how able the driver is to push the car to the limit and extract performance.

3. Race craft (CRA) – How well the driver manages the various challenges which occur during a grand prix.

4. Bravery (BRA) – In dangerous conditions, how capable the driver is to push the car to the limit.

5. Aggression (AGG) – The driver’s natural tendency to fight for race position during a grand prix.

6. Determination (DET) – The driver’s strength of character and willingness to perform, particularly in adversity.

How did the bot determine the scores for the six different attributes?

The bot awarded the drivers points based on eight categories that each contributed to the measurement of one or more attributes.

Here’s how the drivers stacked up before the bot calculated their attribute scores and overall ratings:

Where drivers were tied on points, the driver with the fewest appearances was ranked highest.

And here’s a breakdown of the categories, and which of the six attributes they played a role in determining:

3. Qualifying – Driver’s average position when qualifying in all conditions.

5. Podiums – Number of times the driver finished on the podium (i.e. first, second or third place).

7. Fastest laps – Number of times the driver had the fastest lap in the grand prix.

8. Performance vs car – Number of times the driver finished higher in their rankings than the constructor.

‘Fastest laps’ and ‘performance vs car’ categories were awarded a reduced points breakdown due to being classified as ‘bonus’ categories. Fastest laps are not necessarily an indication of driver superiority and can be heavily influenced by fuel load or tyre choice. And while driver performance versus car performance is a valid comparison, it skewed the outputs by penalising drivers who had competitive cars. Therefore, in the interest of fairness, the overall impact of these two categories was mitigated while still rewarding strong performance.

Furthermore, when calculating the attribute scores and overall ratings, weightings between the categories and the attributes were used. For example, wet racing and qualifying were given higher weights owing to their challenging nature (a higher number in the table below indicates greater importance):

So now you’ve seen how the drivers have fared against each other, as well as their ratings, let’s take you through where all the data came from and have a more detailed look into the process that the bot followed, with the help of Automation Anywhere’s specialist robotic process automation consultant Oli Morris.

Where did all the data come from?

When we say ‘all the data’, we’re talking every driver to have raced in Formula 1 – that’s nearly 800 drivers spread over a period of 70 years of racing in a variety of cars, on a myriad of race circuits, in all manner of weather conditions, and more. And in total, this all added up to 10,000 rows of data for the bot to grapple with.

“Our friends at McLaren provided access to a comprehensive amount of data,” explains Morris.

“It was laid out sufficiently well and we had quite a high degree of confidence that we could let a bot do its thing.

“It was then a case of building that bot (which only took a day) to pull all this data into a database and then get a bot to determine the ultimate McLaren driver line-up via a series of clever algorithms.”

But before these algorithms could be developed, a set of criteria – or ‘categories’ – had to be established through which the bot could score and rank the drivers.

“Ultimately, we built two bots,” reveals Morris. “One to gather all the data into a database and one to extract the outputs from the data in that database.”

Formula 1 teams are renowned for speed, and Automation Anywhere weren’t about to let the side down when it came to processing all this data. The rapid number-crunching prowess of the bot would easily put a supercharged Carol Vorderman, in all her Countdown pomp, in the shade. It pulled all 10,000 rows of data into a database in the same time allocated for Free Practice 3 on a grand prix weekend.

“The sheer volume of data we had available to us was incredibly impressive but, equally, daunting for a human to manually process,” adds Morris.

“Take fastest laps for Jenson Button as an example. It would probably take me about 45 seconds to pull all his fastest lap data, but the bot can process this in one or two seconds.

“In the end, what would have taken a human seven working days, took the bot about an hour.”

One of the most fascinating aspects of the entire process was discovering whether the sole focus on statistics would allow the real quality of a driver to shine through; something that is usually determined on the basis of drivers consistently performing exceptionally well in the wet, overcoming the toughest team-mates – such as Alain Prost getting the better of world champion team-mates on the way to each of his four titles – or a driver outperforming the car they are in.

“Take Fernando Alonso’s second stint at McLaren for example,” says Morris. “It was frequently a real challenge to qualify well in the cars at his disposal, but he would make up so many positions in the race relative to his grid slot. This meant that based on the criteria we set, his race craft was able to shine through.”

It’s why Fernando ended up with one of the highest scores for race craft of any driver at 82.5%; a score that made a crucial contribution to his overall rating of 82.6% which earnt him the ranking of fourth-greatest McLaren driver according to the bot – ahead of the likes of Mika Häkkinen and Niki Lauda who won titles with the team.

“Many fans might have thought that the nuances of such performances would be lost on the machine because it would solely focus on the end race results, consequently negatively impacting on the driver’s overall rating,” concludes Morris.

“However, this hasn’t happened. Equipped with so much data regarding car performance, qualifying results, team-mate performance and more, the bot has been able to comprehend that the driver has outperformed the car and that’s been reflected in the ratings.”

So there you have it, Automation Anywhere’s bot has crunched the numbers and provided you with the definitive, data-driven Ultimate McLaren Team. But having seen the magic behind the machine, do you agree with its outcome? Does its output support the way you’ve voted so far, or are you left regretting your choices? And, crucially, will it influence how you vote for the ultimate McLaren driver line-up?

Let us know your thoughts at @McLarenF1, and don’t forget to vote for your #McLarenUltimateTeam on our Twitter and Instagram channels, as well as the McLaren App.

Want to build your own bot (for free!) and learn more about them? Check out Automation Anywhere’s Community Edition.